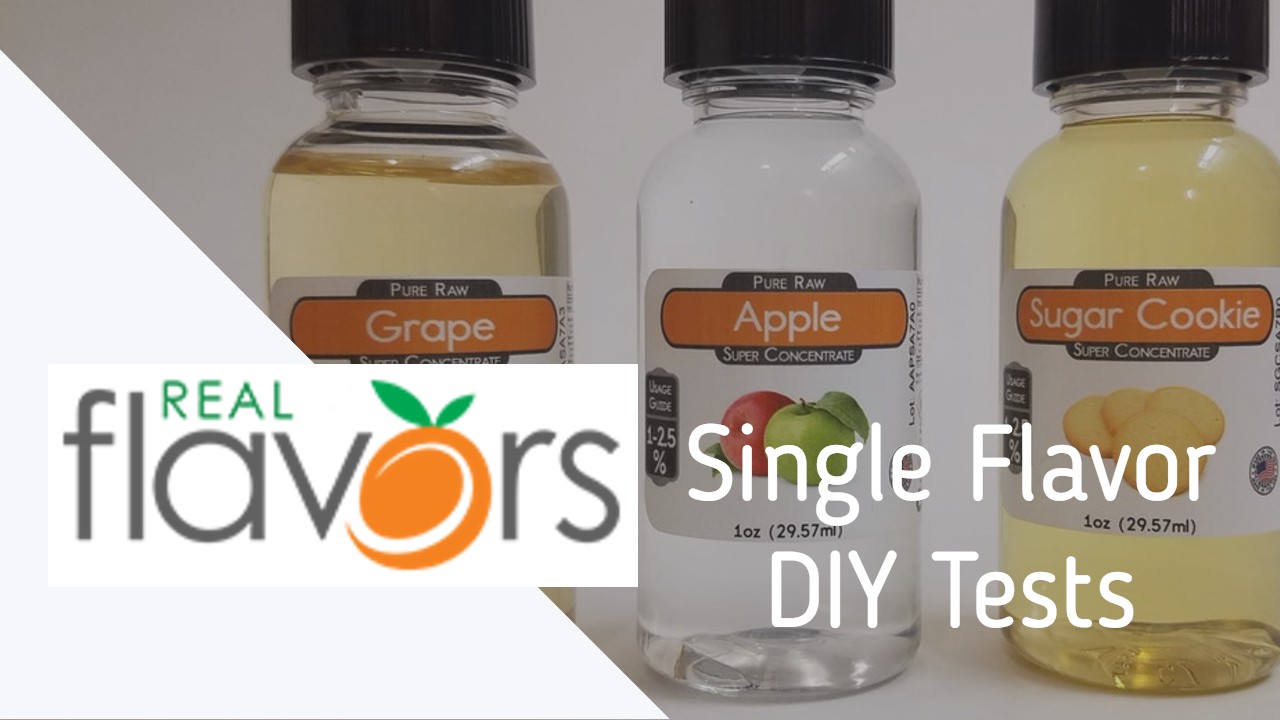 I picked these flavors up during one of Real Flavor’s recent free concentrate promotions, where all I had to pay was shipping. So I got three 1oz bottles for $4, which is a great deal.

These are all from their Super Concentrates line and all of them are suggested to be mixed at 1-2.5%. I’ve mixed 5ml test batches at the max recommendation of 2.5%, at a 70vg/30pg ratio, and with 6mg nicotine.

Let’s talk about each flavor concentrate.

Their Description: A blend of juicy red and green grapes grown in the fertile vineyards of Chile. Sweet and fruity with a hint of tartness, it’s natural…yet perfectly balanced for inclusion in a candy grape too.

The Smell: This smells like a sweet grape soda. When I first mixed it, it had a strong alcohol smell, but that’s completely gone now. It doesn’t smell like natural grape like the description says, but more like a candy grape.

The Taste: I used the CSMNT RDA built at 0.29 ohms on the Predator 228 at 80 watts. I don’t think the recommended percentage is high enough to make this a single flavor vape. The flavor isn’t strong enough. But that grape flavor is pretty good. It tastes like it smells; like a sweet grape candy or grape soda. This one seems like a winner to me. After adding some sweetener it gets really good. So yeah, I think this would make a really good single flavor mix at a percentage higher than 2.5%.

Their Description: Soft, moist holiday cookies with a sugary coating.

The Smell: Smells very good and like a really sweet sugar cookie. When I first mixed this up it had a strong smell of alcohol but that is completely gone after steeping.

The Taste: I used the Icon RDA built at 0.29 ohms on the Predator 228 at 80 watts. The smell from the vapor smells just like sugar cookies, but vaping it isn’t nearly as flavorful. I get just a very slight hint of sugar cookies. This could be really good in a mix though. Adding some sweetener seemed to make it a little better as a single flavor e-juice, but it’s still not strong enough. I think this would be better at a much higher percentage or as an added ingredient to a more intricate mix.

The Smell: This smells exactly like apple jolly ranchers. Spot on.

The Taste: I used the Goon RDA built at 0.29 ohms on the Predator 228 at 80 watts. Like the other Real Flavors concentrates I’ve tested, this one doesn’t have enough flavor at 2.5%, but I do taste the apple flavor and it tastes pretty good. It tastes like apples of some kind, but I can’t tell exactly which kind. It doesn’t seem to taste like candy, just like a natural sweet apple. After adding some sweetener, it’s really good. This is another concentrate that I think could be good as a single flavor concentrate at a higher percentage.

So that it! The Apple and Grape concentrates show promise in being decent single-flavor e-juices at higher percentages. The Sugar Cookie concentrate would probably need an even higher percentage than the other two. It just wasn’t strong enough, but I can see it making a good ingredient in another mix.

If you’re interested in Real Flavors concentrates, you can get them in 1oz bottles for $6.95 or 4oz bottles for $18.95. Check them out at RealFlavors.com.