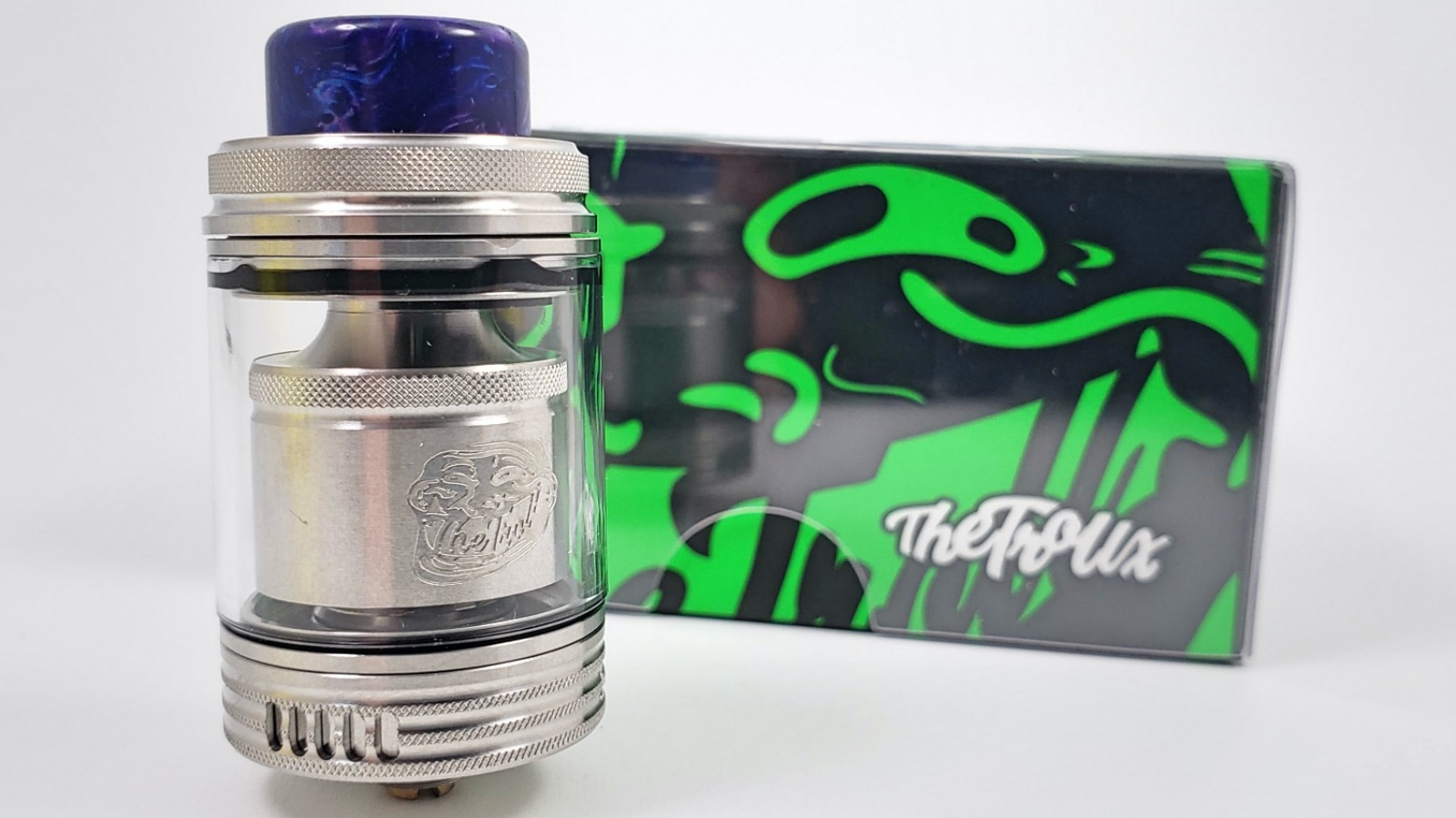 The original Troll RTA came out in early 2017. It was a really popular RTA that at the time was considered one of the best RTAs on the market. It was easy to build and produced a lot of great flavor. And now we have the upgraded Troll X!

The first version of the Troll RTA was a dual-coil genesis-style tank with a floating deck, a large liquid capacity of 5ml, it was 24mm in diameter, and it had bottom airflow.

This new version is also 24mm in diameter and bottom airflow. It holds a little less liquid at a max of 4.4ml but I think that’s a good tradeoff for a shorter size.

And staying true to its origins, you’ll still find the ridiculous trollface meme etched into the chimney section.

As far as looks go, I think the tank looks really nice. It’s an average-sized tank with knurling on the base, above the chimney, and on the top cap, it’s very shiny, and it has a nice 810 resin drip tip at the top to give it a little color. I like the design.

The drip tip at the top of the tank is a nice 810 resin tip. The drip tip you get depends on the color of the tank that you buy but all of the tips look great on each color.

The cap unscrews too if you want to get under there to clean it, so that’s nice.

The chimney section unscrews from the deck but does not come apart from the top cap. It’s pretty big too. This is because the deck is so big. There’s nothing wrong with that in my opinion. You get less liquid capacity with such a large deck and chimney but that’s a good tradeoff for me.

The chimney also has the great Trollface meme on it, which I think is great. The only thing I would have liked to see different on the trollface would be more detail.

This is a bottom airflow RTA, which means better flavor but also more likelihood of leaking. I haven’t had any leaking whatsoever though.

The adjustable airflow ring allows you to open up ten airflow holes in all –  five holes on each side. The knurling on the adjustment ring is nice too. It has much sharper knurling than the knurling on the top cap and it really catches the skin and makes it easy to grab. This is perfect for an airflow control that hits the very bottom of the base because on some tanks with similar airflow control, it can be hard to grab and turn without a lot of room to grab it. This knurling works great.

These are pretty big airflow slots, so you can get some nice airflow coming in if you like big hits.

The deck is a postless deck that can take either single or dual coil builds. You could use a single coil here too but it’ll need to be a pretty big coil to benefit from all of the incoming airflow beneath the coil. But it’ll work!

The post screws unscrew from the sides of the posts and give you plenty of room to fit big coils.

The Troll X also uses airflow inserts. You get two airflow intake inserts that install right beneath the coil; one called the Slim Groove insert and the other called the Honeycomb Dot insert.  The pre-installed Slim Groove has two big wide slots and is designed for vigorous airflow. The Honeycomb Dot insert has a 21 little round holes in it and is designed for soft smooth airflow.

The purpose of these inserts are to diffuse the airflow so that the air surrounds the coil while it’s being fired. You can easily pop it out of place by sliding it out from either side. When you put it back in, you slide it in sideways, and then it clicks into place.  And the nice thing about this is that you can do this while coils are in place too. So you can switch it out anytime.

I’ve tried both inserts and also leaving it out entirely and the main difference I notice is how much airflow you get. You’ll probably get a little less flavor with no insert or with the wide slot insert since the airflow isn’t directed as well to the coil but I think the flavor is so good in this tank that it hardly matters. But if you have sensitive tastebuds and want more flavor, the honeycomb insert is probably what you’ll want to use.

Wotofo includes a coil measurement cutting tool so that you can be sure that you’re always cutting the coil legs perfectly to fit into the deck. For the Troll X RTA specifically, they suggest 6mm. So to do that, simply use the larger 4mm guide with two 1mm guides added. Then stick the coil in and clip the legs from the bottom.

Then you can drop the coils into the deck and tighten them down. Remember, the coils need to be installed in one negative and one positive post to work, so make sure each leg is in a different block. It won’t hurt anything if you do it wrong, the coils just won’t work.

At this point, I usually fire the coils just to get any dirt or oils off, but if you’re using contact coils, you can also start firing them and pinching them together to get them to fire evenly. I always space out my coils so that I don’t have to deal with that. They use up a little more room but they always fire perfectly.

Now add the cotton to your coils, keeping the cotton fairly tight, then snip it off at the ends at about where they cotton extends past the outer edge of the main tank base. Then fluff out the cotton and tuck it into the wicking slots.

Now get the cotton soaked up real good and then put it all back together again. Now you can fill it up and start vaping!

This thing wicks extremely well too. I’ve been hitting this at moderately high wattage, about 65 watts, over and over with no signs of a dry hit. You can visibly see the tank draining while you’re chain vaping because it just wicks so fast.

The last thing to mention is the flavor and the flavor for me has been excellent. Using only the included accessories that came with the tank, the flavor I get out of it has been probably some of the best of any RTA I’ve used. I’ve been really impressed with it.

So that’s it for The Troll X RTA. It’s a great tank. It’s easy to build, has some cool airflow intake options, a big build deck, it wicks fast, and the flavor is really good. I’ve really enjoyed everything about this one.

This was sent to me for review and you can get it from Wotofo.com for $37.95.