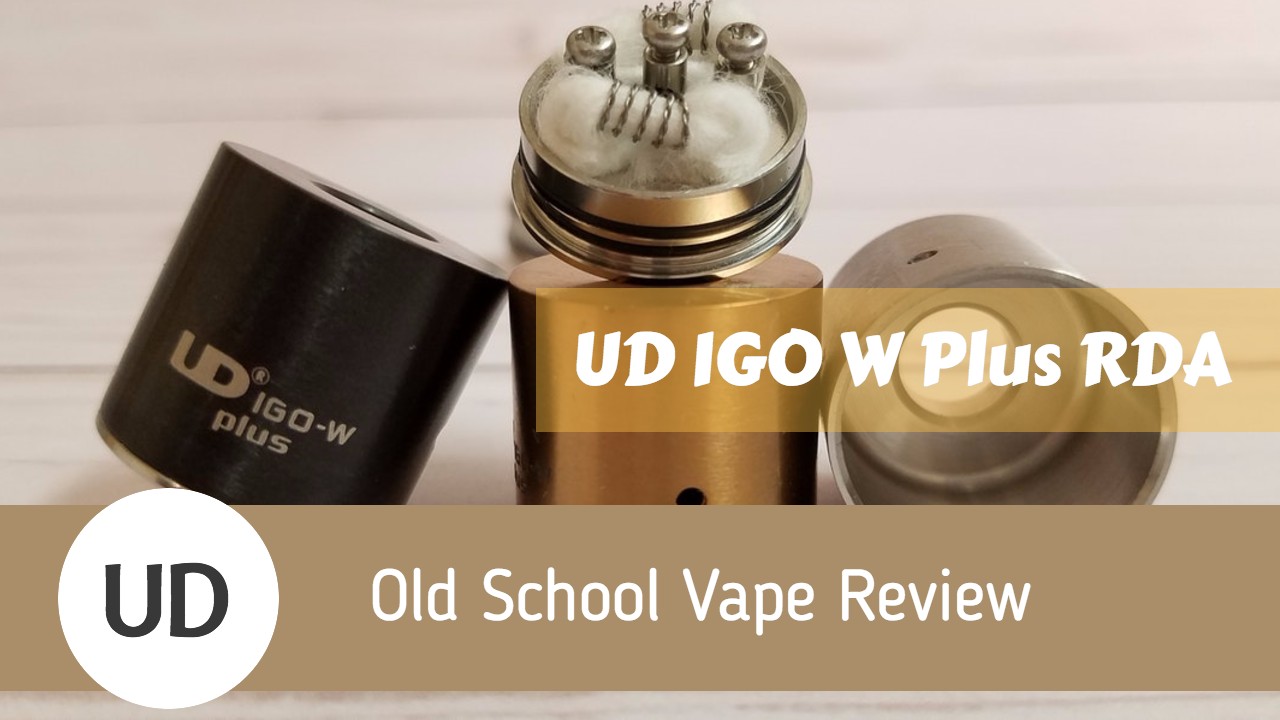 One of my listeners, Dave, sent me an email telling me about a sale on Jvapes.com for Igo W Plus RDA’s for only $1. He knows that I like to do old school vape reviews so he thought I might be interested, which I was.

I had planned on buying one to do a review but Dave emailed me back a couple days later telling me that basically, they weren’t very good and that he would send me a couple. I said hell yeah, so now let’s take a look.

Ok, so this RDA came out sometime around late 2014.

It’s made of 304 stainless steel, has an old-style three-post deck, it doesn’t come with a drip tip, and these originally sold for around $15 – $20 each.

So Dave sent me three of these, all in different colors. Now what’s interesting here is that the black top cap has much larger airflow holes, which I think is a mistake because the official specs and every review I’ve looked up for this RDA shows small 2mm airflow holes.

Starting with the barrel, let’s talk about those 2mm airflow holes. You’ll see that there are two on both sides, so this is really only a dual coil tank even though they marketed it as being able to do both dual and single coil builds.

Technically yes, it can do both dual and single, but you can’t close off one airflow hole so you have airflow coming in and not hitting a coil. The airflow holes are so small that you could just close one side off with your finger if you wanted but that’s not a comfortable way to vape.

When you take the barrel off, you’ll see the deck. This is about as basic as it gets and this was actually pretty common back in 2014.

There are three posts which have tiny post holes. You can’t do special builds in this one. I could barely get two 30 gauge twisted coils through the center post. You might be able to fit 26 gauge basic round wire builds in the center post. Something else I noticed about these posts is that they were drilled poorly. There were little pieces of metal that I had to push through on a couple of them.

The post screws are small Phillips head screws. These are terrible. They strip easily and they can’t tighten down. They constantly loosen up and I have to keep tightening them, which sucks because if you tighten too far, it pinches the coil wire and snaps it off.

The juice-well is pretty small and fills up quick. It doesn’t really hold much, but it’s not terrible.

The airflow is extremely restricted with the 2mm cap, but it’s a kind of a cross between a loose Mouth To Lung or a very restricted lung draw RDA. I don’t like that airflow at all. I would have liked it to be much more restricted so that it would better as a mouth to lung atomizer.

I didn’t think I would be able to fit Clapton coils in this so I made some tiny 30 gauge twisted coils. Not the best coils for flavor, but the best I had time to do. After I published the video for this review, one of my subscribers requested that I try a 26 gauge 0.24-ohm build, which I did. The results were the same for me.

The flavor isn’t anything special. It’s much more muted than tanks of today, but the flavor is there, it’s just not great.

I also tried out the black barrel cap with the larger airflow holes even though this isn’t the barrel you should get with this atomizer, and the flavor is the same as the other caps, but it has much more airflow. The larger airflow holes make it impossible to Mouth To Lung with that cap and make it more of a slightly restricted lung draw.

Back in the day, this got a lot of great reviews. And for only $15, it was pretty affordable. It’s not worth anywhere near $15 today, which is probably why Jvapes.com is selling it for only $1

Honestly, I have a hard time even recommending this for a $1 unless you just want to own a piece of vaping history, because otherwise, you’ll probably never use it. But that’s considering that you already have other good RDA’s. If you’re a beginner and this is your first RDA, you can’t beat $1. It would be a great atomizer to learn on.