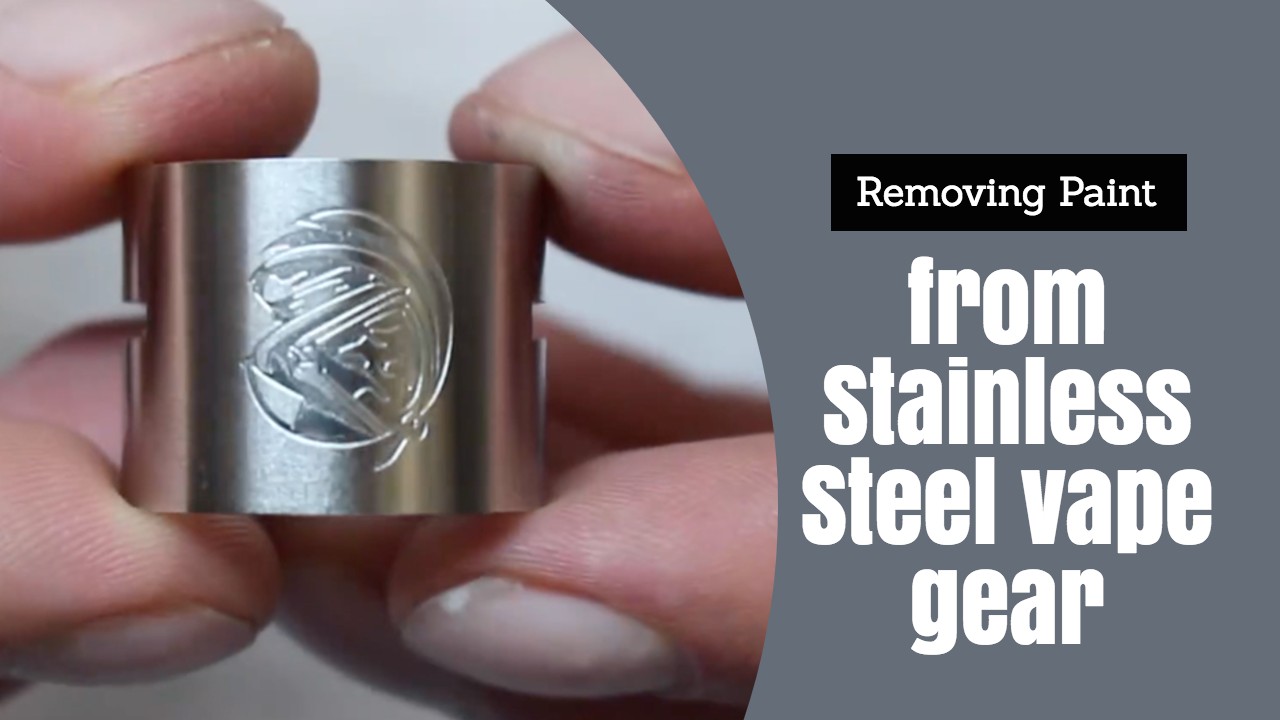 I want to start by saying that I’m not an expert on metal work. Far from it. I’m not much of an expert on any sort of handy work actually. I usually fix things around the house my jamming paper towels into them. 😉

But over the weekend, I decided to remove the paint from one of my atomizers, which was chipping paint really bad – the CSMNT RDA. First, I want you to know that this is a clone CSMNT. I don’t want anyone to think that the authentic CSMNT has bad paint.

This clone is actually the reason I don’t buy clones anymore unless I also own the authentic version and I want to compare them against each other. I just don’t trust the materials that are used. It’s also the reason why I try to buy only stainless steel atomizers too. If I can help it, I don’t want any atomizers that are painted.

But anyway, I had this CSMNT clone and the paint was just looking really bad. I didn’t even feel safe vaping on it anymore because who knows if some of this paint was getting into the deck while I was vaping it. It probably wasn’t, but still.

Unfortunately, I didn’t think to record any video or pictures of it before I sanded it down because I wasn’t planning on talking about it, but here’s what it looks like after sanding it down. I think it looks pretty good. It could probably be better, but my hands got so cramped up that I think this is good enough for now.

After getting the paint off of the CSMNT, I thought this might be something some of you might be interested in, so I decided to start on the Icon RDA, which is another one of my clones, but like I said, I only buy clones if I want to compare it with the authentic, and that was the case here. I actually got the clone Icon before the authentic was even released. I wanted to see how close the clone would be. In case you’re wondering, it’s an exact duplicate. It’s crazy how fast and accurate these machine shops can clone things.

Anyway, here’s what I used for the CSMNT and the Icon.

I have some Grade #3 Steel Wool, which you can get from Home Depot or Walmart for less than $4 for a pack of 12. This is a very coarse grade of steel wool. If you want to be extra careful about not scratching your gear, you might want to get something finer, like #2 or even #1, but just know that it will take much longer. I mean much, much longer. The thing about steel wool is that it scratches metal. Not large scratches, but you’ll end up with a matte finish, rather than super-shiny metal.

If you want shiny metal and you don’t mind putting in a lot of work, most people suggest starting with the finest steel wool or sandpaper you can find, and moving up in coarseness until you get the results you want. Then you’ll need to work your way back down to very fine grit wool or sandpaper and then polish it up when you’re done.

You’ll want to do this over a workbench or something because the steel wool falls apart and makes a mess. You definitely don’t want little metal slivers all over your carpet. You might also want to wear work gloves because you’ll probably get slivers in your fingers too (I got a sliver and it hurt). And since little paint particles will be floating around, you should use a mask too so that you’re not inhaling that stuff.

After doing the bulk of the work with the steel wool, I moved onto detail brushes, which I got from Harbor Freight for $2. There’s a vinyl brush, brass brush, and steel brush. They look like toothbrushes. I used the steel brush after removing most of the paint from the RDA to get into the little nooks, like the etched design, lettering, under the top cap, and in the airflow holes.

When I was done, I cleaned the RDAs by hand and threw them both into the ultrasonic cleaner. The CSMNT came out looking great, in my opinion. The Icon RDA seems to have a different kind of paint on it and needs a lot more work. I managed to fade it, but I couldn’t get it to look like shiny steel. I’m sure with some work, I can get it though. I might rig something up using my drill.

So yeah, that’s what I’ve done so far. Like I said earlier, this isn’t something that I have experience with, so if you know of a better method, which I’m almost positive there is, please let me know because I still have a lot of work left on this Icon clone.