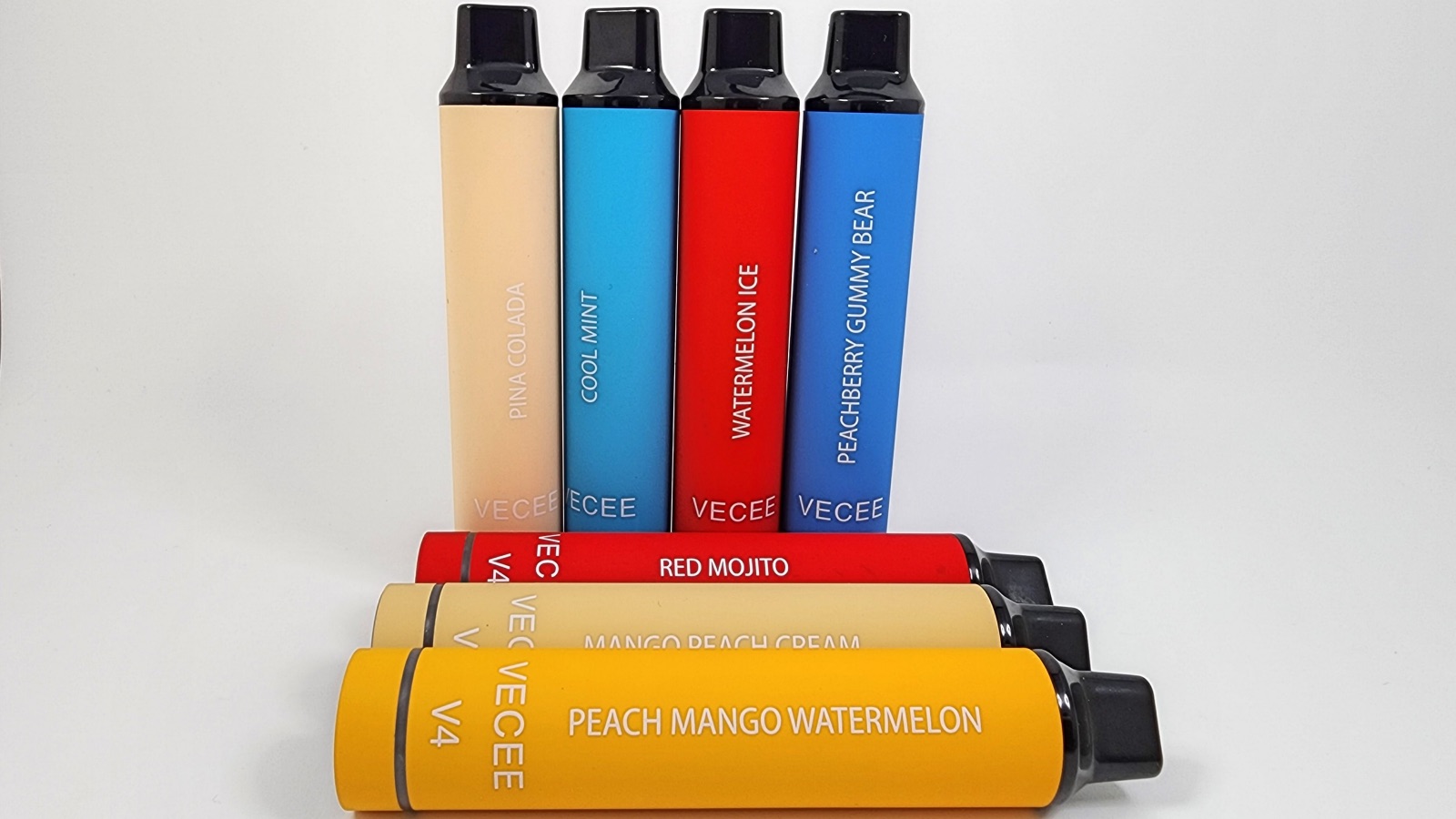 The Vecee V4 was sent to me for review from Vecee. This is a big disposable vape with a USB-C charger that puts on a light show with every drag.

First, let’s talk about the shape and size of the Vecee V4. It’s a big disposable device. And that’s because it has a 600mAh battery and 10ml of liquid in it. Vecee says it should give you up to 3500 puffs. That’s a lot. So yeah, this should last you a long time for a disposable device. And the top has a comfortable tip, so it’s nice to draw from. 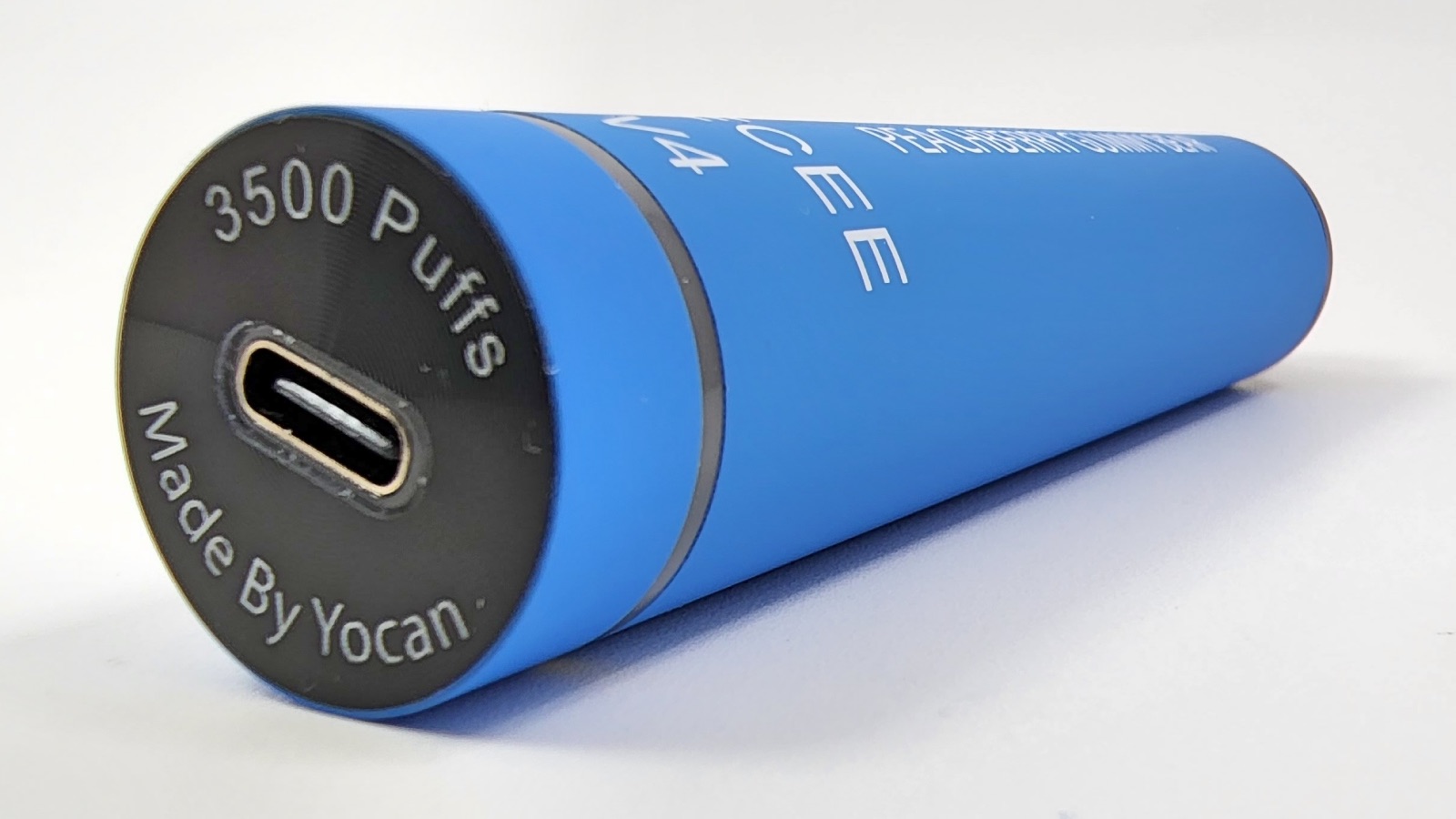 So let’s talk about the battery and charging. At the bottom of the V4, there is a USB-C charging port. We’re starting to see these more on big disposables like this, and that comes with some pros and cons. The pro is that you can recharge this as needed to make sure you use up all 10mls of liquid. The con is that you’ll eventually vape this dry, and you’ll probably get a dry hit since there will still be a charge in the battery. It’s not a big deal as long as you’re paying close attention to the flavor near the end of the life of the device. You probably just don’t want to try to get everything you possibly can out of it. 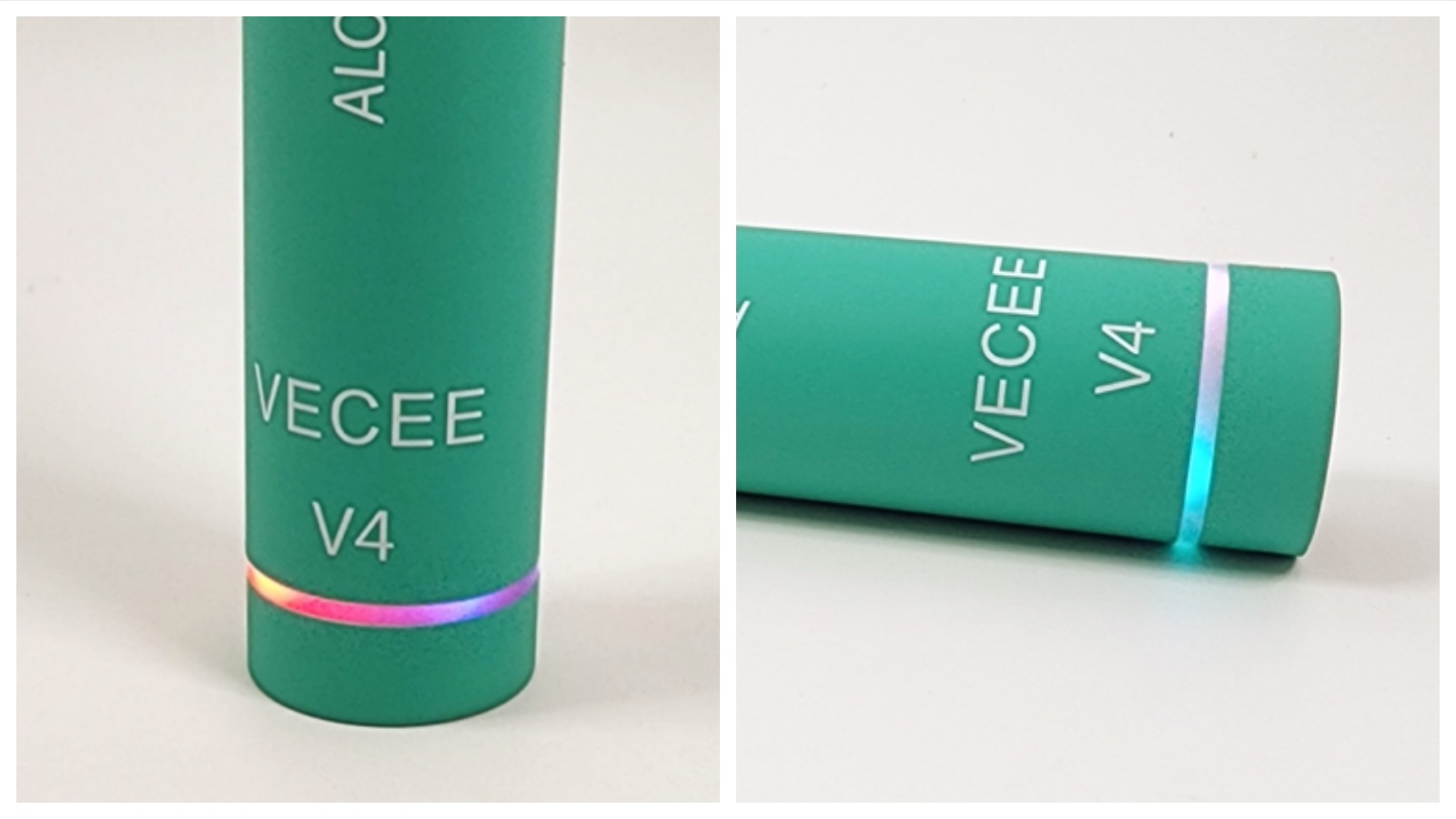 The most notable feature of the Vecee V4 is the light show this thing puts on. When you take it a hit, the bottom of the device and the LED ring will slowly scroll through a rainbow of colors. And when you stop taking your hit, it continues for a few seconds and then flashes quickly through all of the colors.

There’s no way to turn it off, so you’ll have to make sure you’re okay with that. I think it’s fun, and actually, something I could see a lot of gamers appreciating since so many gamers have RGB devices like gaming keyboards.

But I can also see how some people might not want to draw so much attention to themselves every time they take a hit on this while they’re out in public. Basically, some people will love the lights, and some will hate them. Personally, I don’t mind the lights.

The Draw and Airflow 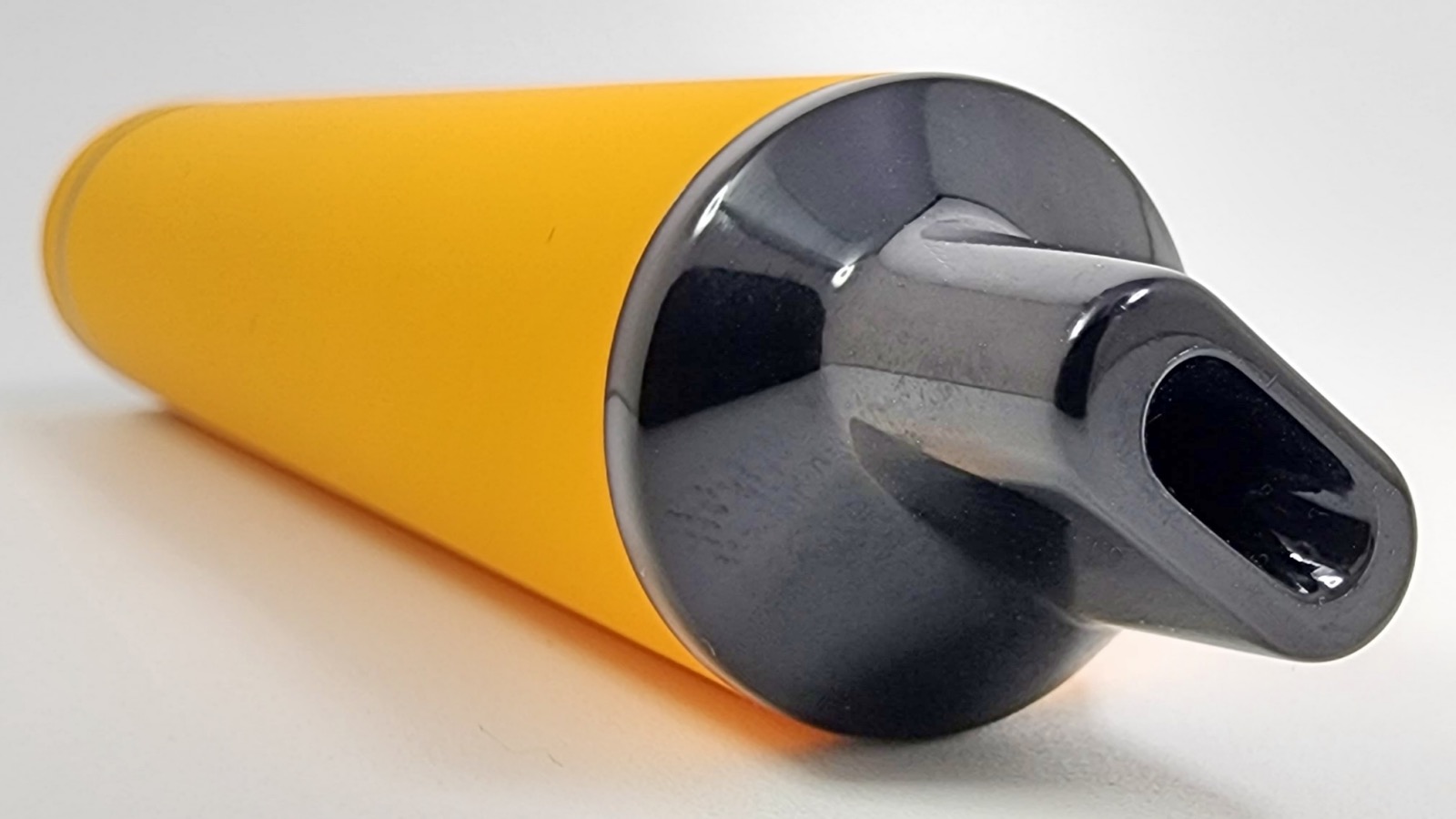 The airflow comes in from the USB-C port. It comes in nice and smooth, which is nice. The draw you’ll get here is a tight draw, so it’s a mouth-to-lung draw device only. I think it’s really comfortable and what I like in devices like this. 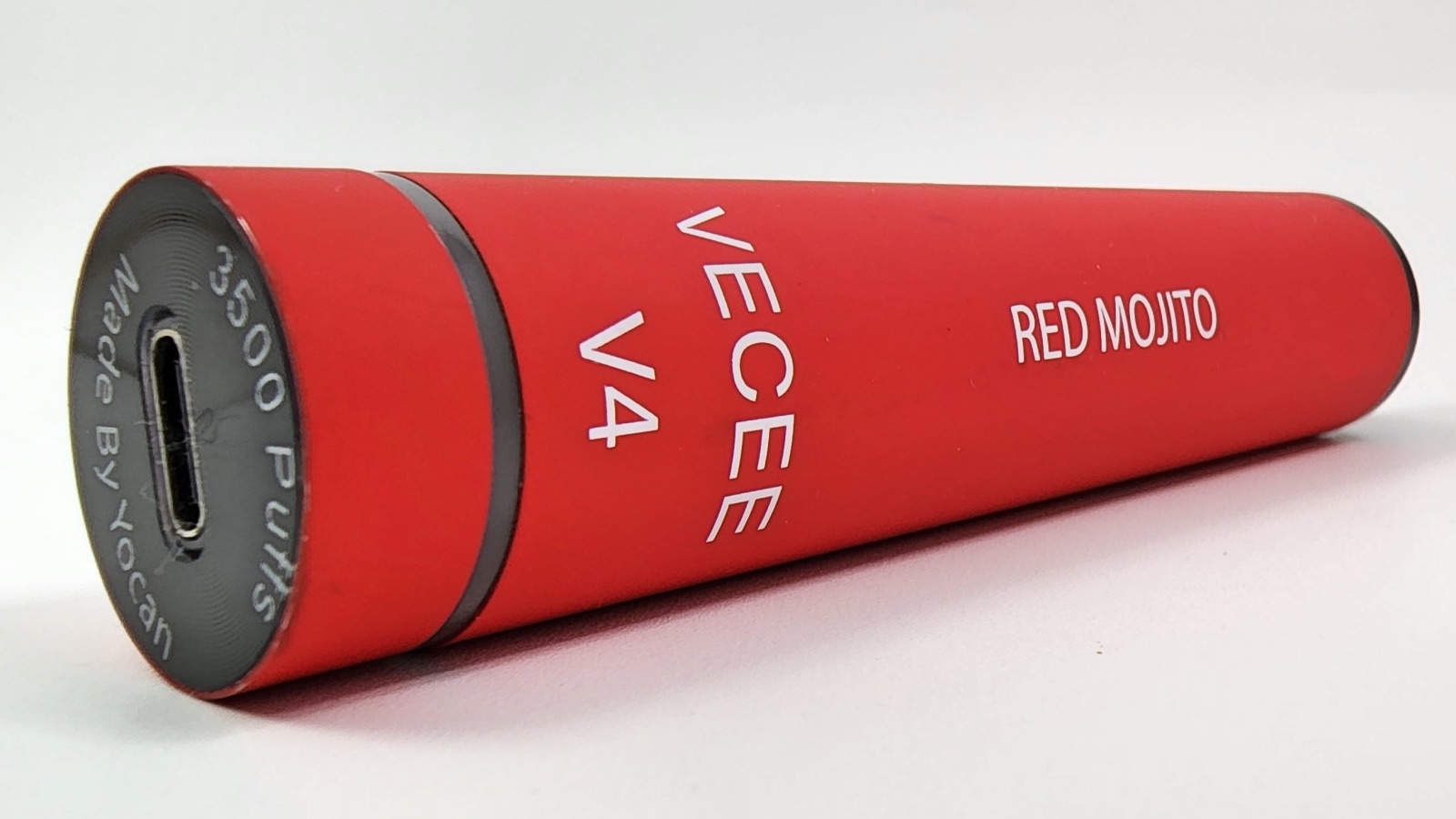 Banana Ice – This flavor is like a banana taffy. It’s really good. I personally would have liked for it to be a little sweeter, but it’s still pretty good as it is.

Cool Mint – Probably the least exciting of all of the flavors, but it’s a good spearmint-type vape. It’s like a fresh piece of sweet spearmint gum.

Mango Peach Cream – I really like this one. It tastes like peach yogurt. That cream is really nice, and the peach is just like the sweet peach at the bottom of a yogurt cup. I’m not really getting the mango here, though. If it’s in there, it’s really light.

Peach Berry Gummy Bear – This one is very strange. I have no idea how to describe this flavor. I don’t get a lot of peach flavor, but I do get that berry flavor. I can also see why they called this gummy bear because it has this really unique gummy flavor. I like this one a lot. It’s sweet, tasty, and really different.

Peach Mango Watermelon – This is a sweet artificial fruit flavor. I think it’s a little tough to detect any of those flavors in here. I think I get more watermelon with a slight hint of peach, and then I get that little bit of mango on the exhale. I would have liked for the mango to be a lot stronger, personally, because I can barely taste it.

Red Mojito – Here’s another really unique flavor. If you’re not familiar with a red mojito, it’s a sweet cocktail made of rum, lime juice, sweetener, and cranberry juice. I wouldn’t say this exactly like a red mojito, but I can see the resemblance. It’s a sweet, light cranberry and sort of fruity flavor. I don’t get any rum flavor here, but it has a bit of an earthy taste to it.

Sour Apple Ice – This smells just like a green apple, but it doesn’t taste like a green apple. It has a very earthy taste with just a hint of apple. I think this needs a lot more apple flavor, so I’m not too big of a fan of this one.

Watermelon Ice – This flavor was also in the V2 model. It has a slightly floral flavor on top of a sweet candy-ish watermelon. It actually seems sweeter and stronger than before.

Pina Colada – This is a good tropical pina colada flavor. It’s a nice sweet, but not overly sweet, pineapple and coconut flavor.

Aloe Grape – I don’t really know what aloe tastes like, but this definitely tastes like some sort of grape flavor. It’s like a grape candy with a hint of what I’m assuming is aloe, which is sort of like a light refreshing plant-like flavor.

So that’s it for the Vecee V4. I like that it holds so much liquid, that it’s rechargeable, that the draw feels good, and that all of the flavors are great. I think it would have been nice to offer a 20mg version of this. And those bright, colorful, flashing lights might turn some people off but other than that, these disposables are great.

These devices were sent to me for review from Vecee, and you can learn more about them here.