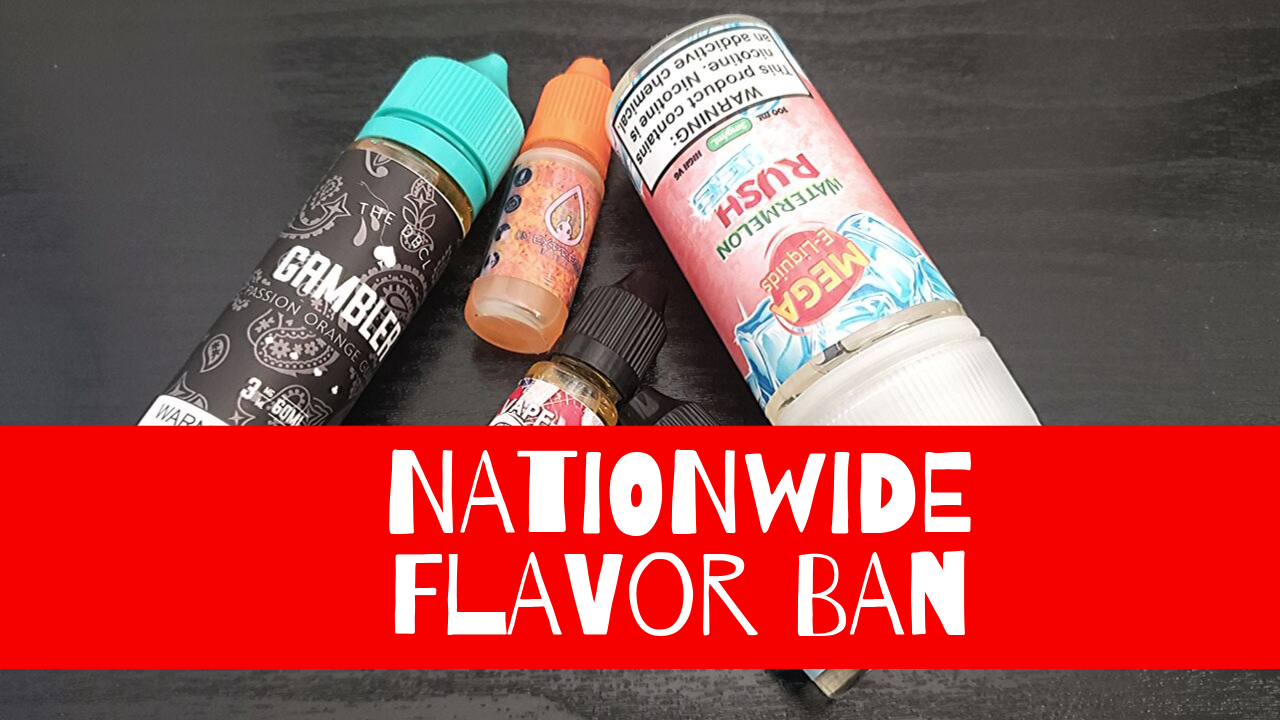 On September 11th, 2019, President Trump announced that his administration would be taking action against flavored vape products.

Following this, the Health and Human Services secretary, Alex M. Azar II said that the FDA is now outlining a plan in the coming weeks to completely remove flavored vape products from the market, including mint and menthol, but with the exception of tobacco flavors.

Why Is This Happening?

This is mostly the result of the lung issue scare in recent weeks that have put hundreds of people in hospitals and that has killed at least six people so far. The anti-vaping groups have also thrown the vaping “epidemic” into the mix to tip the fear-mongering scale over the edge. And it worked. People are scared. I’ve even had personal friends ask me if they should be worried about vaping.

But the truth is that unless you’re buying black market THC cartridges, then no, you shouldn’t be scared. That’s what’s causing the lung damage scare.

Were these people vaping? Yes.

But they were not vaping store-bought liquids. They were vaping contaminated home-made liquids that they bought off the street.

Now as for throwing the youth vaping into the mix, yeah, sure kids like flavored vape products. But everyone likes flavored vape products. Adults too. Surveys have shown that flavors are the most important aspect of vaping that keeps former smokers away from going back to cigarettes. And I’m not saying that underage use isn’t a problem. But there are better ways of preventing underage use than an outright ban. Like enforcing ID checks and fining companies who sell to minors. And regulations can restrict inappropriate marketing and e-liquid names that people feel are targeting kids. That’s what needs to be done. Why Should We Worry

If you vape flavors, which most of us do, you know how important it is. Flavors are what keep us vaping. Politicians and the general public don’t understand that. They think that flavors don’t matter and that all we need is tobacco flavors. That’s not what makes vaping appealing to us. Flavors are.

So what happens when flavored e-liquids go away?

Businesses will shut down – Vape businesses simply can’t survive if they don’t sell flavored e-liquids. Tens of thousands of vape shops will close, the tax revenue will be lost, and thousands and thousands of employees will be out of a job.

Vapers will start making their own e-liquids – Many of us are perfectly capable of making our own e-liquids, but what happens when millions of inexperienced people start buying bottles of nicotine and flavors to make their own flavored products. We’re going to have people handling strong levels of nicotine, spilling it on their skin, and storing it in cabinets where kids or animals can get into it. And a lot of these people won’t know what flavors to buy. We’re going to have people mixing essential oils into their e-liquid. This is not going to end well.

More black market products will hit the market – Banning a product will lead to a much larger unregulated market that can’t be taxed. If you think the lung damage scare is bad now, wait until the black market takes over. Many more people will get sick. And on top of that, the government won’t get any taxable revenue from it.

People will go back to smoking – This is the biggest issue of them all. Kids, your friends, your mom, your family members. Maybe even you.

What Can You Do?

Sign the petition on WhiteHouse.gov – A lot of people say that these petitions don’t make a difference, and that might be true, but it doesn’t hurt to do it anyway, as long as it’s not the only thing you do. We need 100,000 signatures to get a response from the White House, so sign it and then work on other ways of helping.

Call the White House – CASAA sent out a call to action telling people to light up the switchboard at the White House. They give you the number to call and some examples of what to talk about. I’ll put the link in the description.

Talk to your vape shop employees – Ask your local vape shops to support petitions and to donate to organizations like CASAA. Ask them to talk to their customers about it. Ask them to call the businesses they work with to see if they’re helping too. Ask them to print out advocacy printouts that they can hand out to customers. Talk to friends and family – Share your thoughts in person or on social media. Explain the facts. Tell them that the sicknesses around the country are caused by black market THC cartridges, not regular e-liquid sold in stores. The Washington Post shared the results from FDA lab testing that explains that they found Vitamin E Acetate in nearly all of the samples they tested and that they found nothing unusual in nicotine-only products they tested from the patients.

Comment on negative news – When you see a news story online that talks about the vaping lung issues, leave a comment and explain that this is not the result of vaping, but rather of black market products. And add a link to reputable sources so they can read it for themselves, like that Washington Post article I just mentioned

Donate to pro-vaping organizations – Organizations like CASAA and the American Vaping Association are non-profits that do a lot of good for the industry, but they need money to survive. Greg Conley from the AVA and Alex Clark from CASAA have been doing an amazing job in the last couple of days and we need to keep them going with donations.

Sign up to CASAA.org to get alerts – CASAA sends out up-to-date notifications with call to actions for your city and state. They help you find the lawmakers that you need to contact to voice your concerns. This is one of the most important things you can do. It’s free, so sign up at CASAA.org.

Check out UnitedVapersAlliance.org – This is something I just learned about from the most recent Vape Team live show featuring the guys from The Vaping Legion. The Vaping Legion created this organization and have actually been working on this for months now. The paperwork is being processed to make this an official 501(c) organization. Once it’s all official, they plan to rally in Washington D.C. They expect this to happen within weeks, so keep an eye on this for updates

I think that covers it. If I’ve left anything out, please leave a comment. It’s a scary time for sure but we can fight this. And if this goes through, it won’t be immediate. The government works slow. There will need to be a grace period, and there’s no doubt that there will be lawsuits that stretch out legislation even longer. But for now, do what you can, educate people, and keep on fighting.