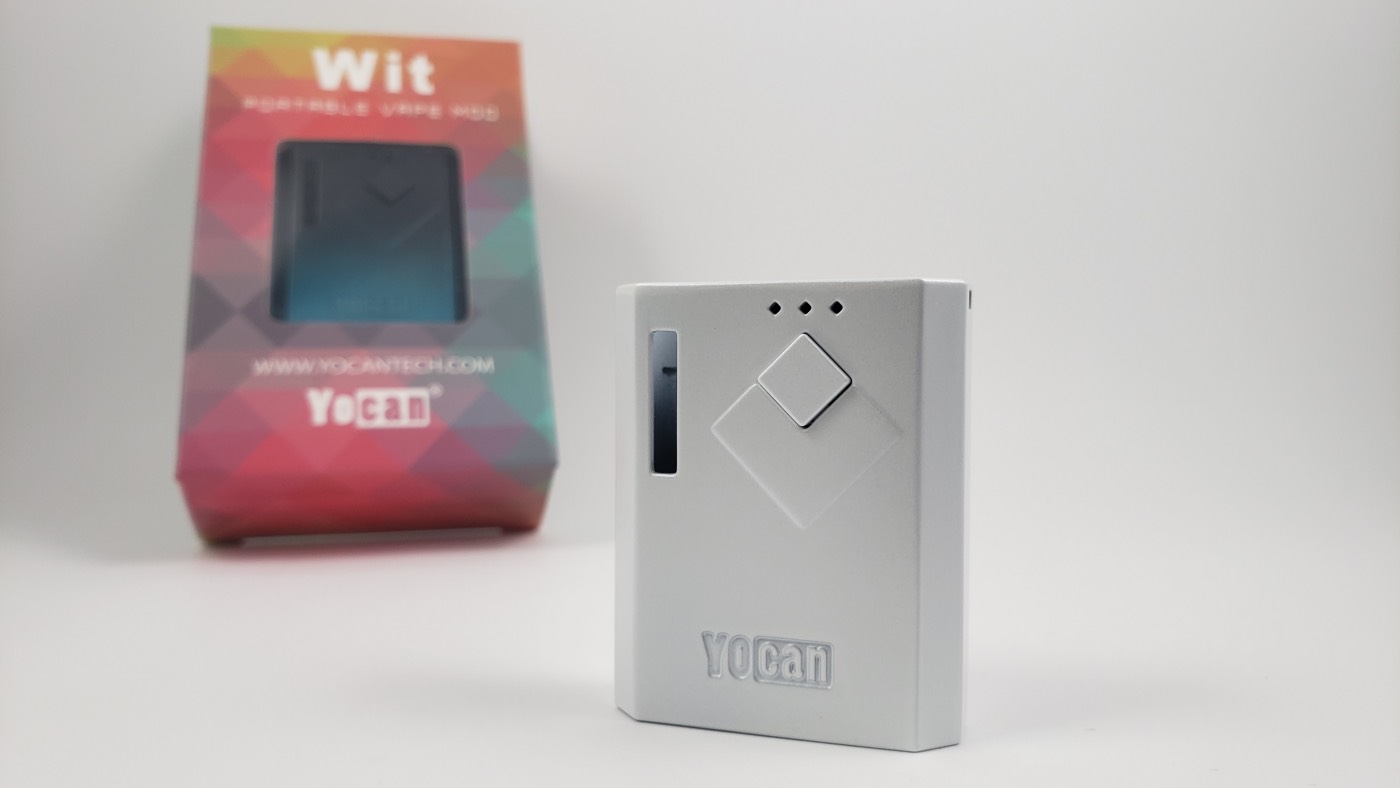 If you’re not familiar with Yocan products, they are a company that caters more to the crowd interested in CBD and similar products. Wink wink. I have no problem with that. So that’ll give you an idea of why the Wit device is designed the way it is, in particular, two design features; preheating and utilizing a drop-in atomizer. But this can be used just fine with nicotine vaping too, but with some caveats, mainly atomizer size limitations. So let’s start with the atomizer connection. To use the Wit, you need a very small atomizer that sits somewhere between the diameter of 9 to 11.5mm. These are the types of atomizers that you’ll usually find pre-filled on the back wall of your local vape shop or head shop. The device doesn’t come with one, so you’ll need to buy one before using the Wit. I bought a refillable tank from a company called Dop (dope) AF.

If you have some of those old-school e-cig cartomizers, those will work too, as long as they have 510 threading. If you’re wondering what I’m using here, these are cartridges from Mimic Ecigs. They’ve been working really well in the Wit.

The Wit is described as being 510 threading compatible, but you don’t actually screw the atomizer into the device. You need to use the included magnetic 510 thread adapter on your tank. This adaptor screws onto any 510 threaded tank and allows it to attach to magnetically make the connection with the Wit. And it sticks strong. Once the tank drops down into the device, it doesn’t come out unless you want it to come out. I like how strong that magnet is.

And Yocan also built in a liquid view window on both sides of the Wit so that you can easily see how full your tank is. That’s a handy feature. Above that firing button are three LEDs which indicate the power level that the Wit is set at. There are three power voltage settings; low, medium, and high, and those translate to 2.5v, 3v, and 3.5v respectively. The battery indoor the Wit is an internal 500mAh battery, so it’s small, but not surprising considering the small size of the device as a whole. I’d even say that the 500mAh battery is big for this device.

A fully drained battery will charge in 30 minutes, so it charges fast,

You can vape the Wit while it’s charging, but the user manual warns against it. The box does say that the Wit has passthrough as a feature, so I’m guessing that it might be safe to do occasionally or perhaps the user-manual included the warning by accident. Either way, I’d suggest not overdoing it if you decide to do it. I think these devices are perfect for their intended purpose. If you usually vape medicinal e-liquids that come in pre-filled cartridges, the Wit is awesome. You don’t need to put a tiny cartridge on a big bulky device anymore. You can slide it into the Wit and have a small and discreet vape. And you also get multiple voltage settings, which is awesome. I really think this is a very cool device for pre-filled cartridges.

This was sent to me for review from YocanTech.com and you can get the Wit for $23.99.