The Vandy Vape Pulse BF 80w Box Mod was sent to me for review from Sourcemore.com. Check it out here. This is the infamous device from popular reviewer Tony B. that created the controversy within the vape community in regards to Voopoo. Here’s a link if you want to learn more. But this review is all about the Pulse, so let’s talk about it!

Ok, now here’s what you get in the box:

The size of the Pulse is 82mm tall, 56mm wide, and 27mm in depth. If you’re in the U.S. and don’t understand the metric system like me, that roughly translates to about 3 inches tall, 2 inches wide, and 1 inch in depth. Because it’s made with same plastic as the original Pulse, it’s very lightweight. 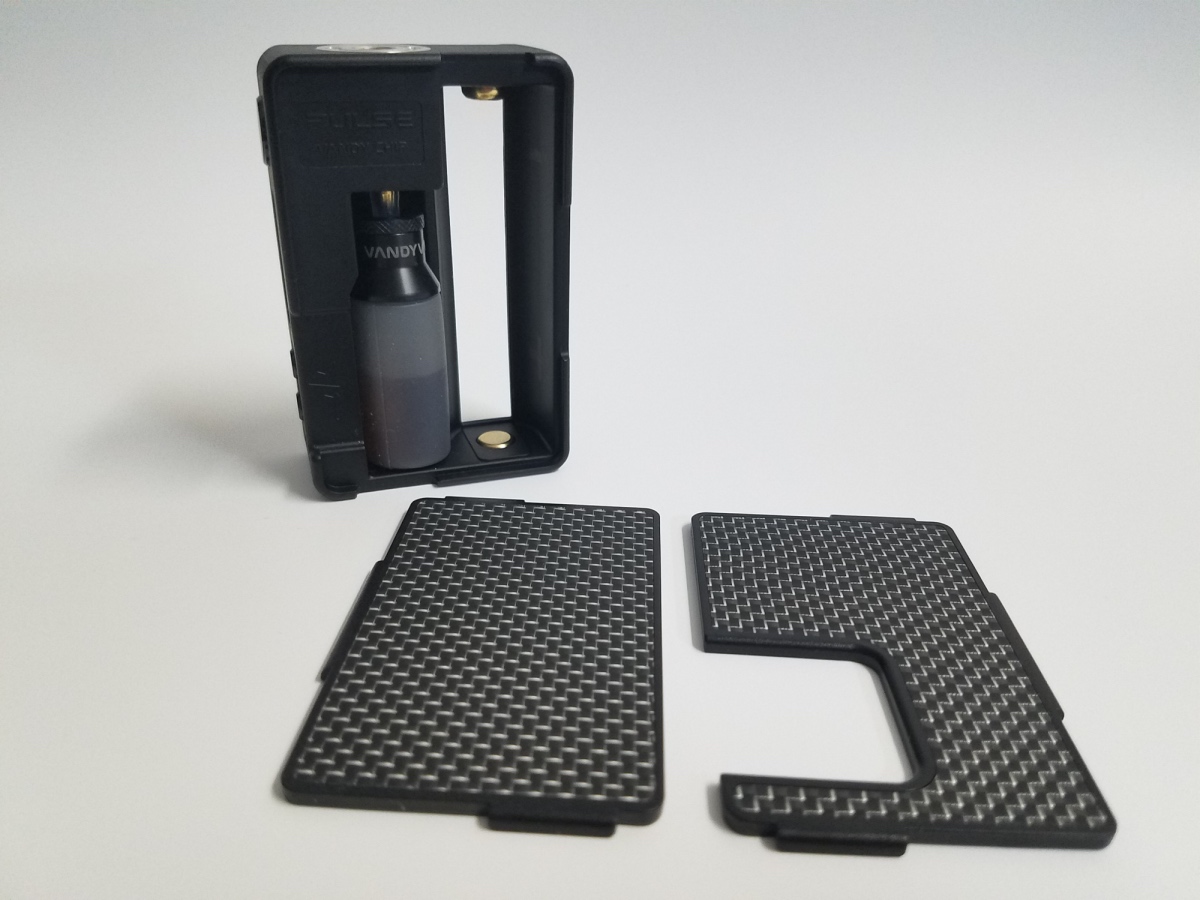 There are a bunch of different panels available for the 80w Pulse and you can order these individually from a bunch of different vendors, which is awesome because you can easily change up the design of the device however you want. I like this a lot because if I have a colorful atomizer, I want a matching device. From what I’ve seen, the carbon plates are the cheapest at around $6 for a pair, which means front and back plates. The fancier resin plates cost about $8-12 per pair depending on where you look.

The plates are held in place on the device with two magnets on each plate. They look small, but they hold tight. I don’t have any problems with them falling off or with them wiggling around.

Like with the original mech mod version of the Pulse, if you take the front plate off you get access to the squonk bottle and the battery compartment. 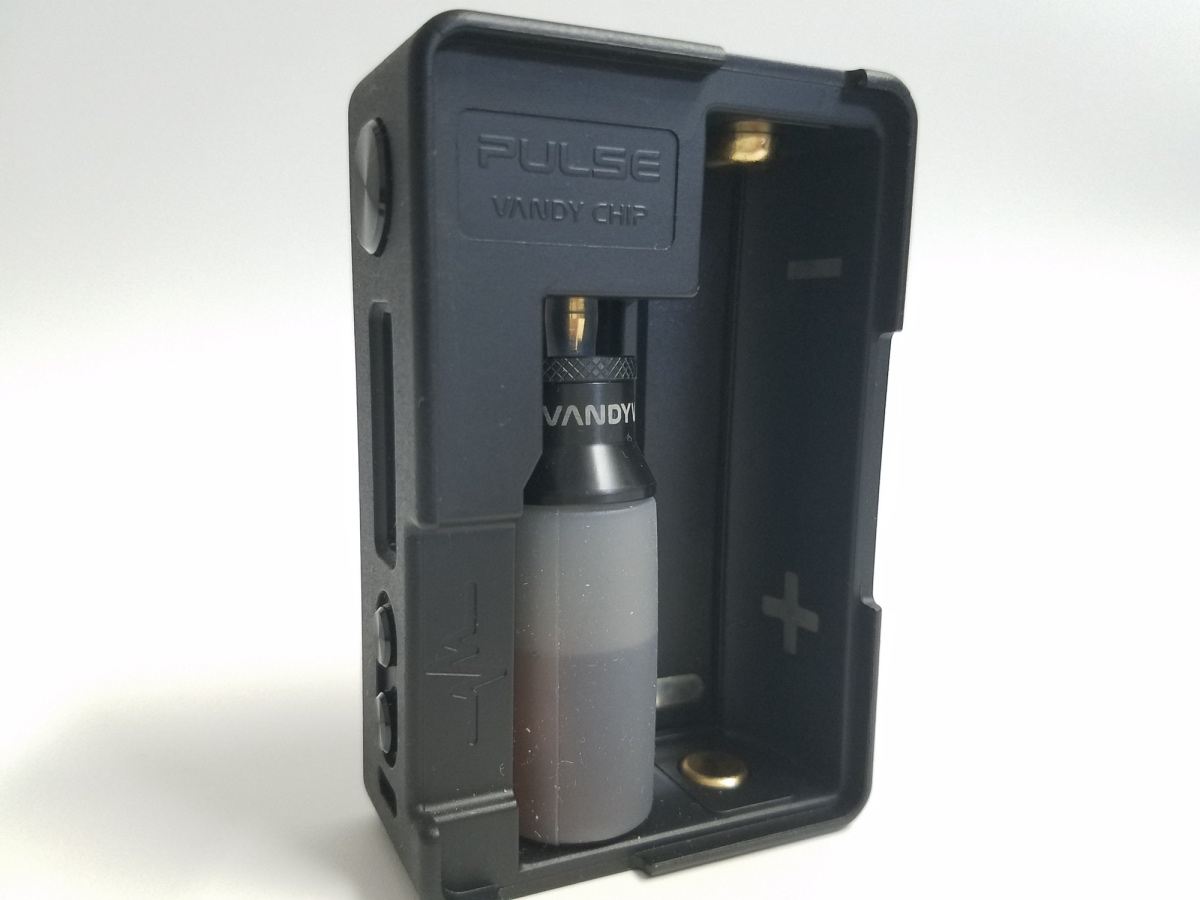 If you take the back plate off, you have access to the battery so that can push it out. You also get access to the cover that leads to the internals.

The Internal Components of the Pulse 80W Mod 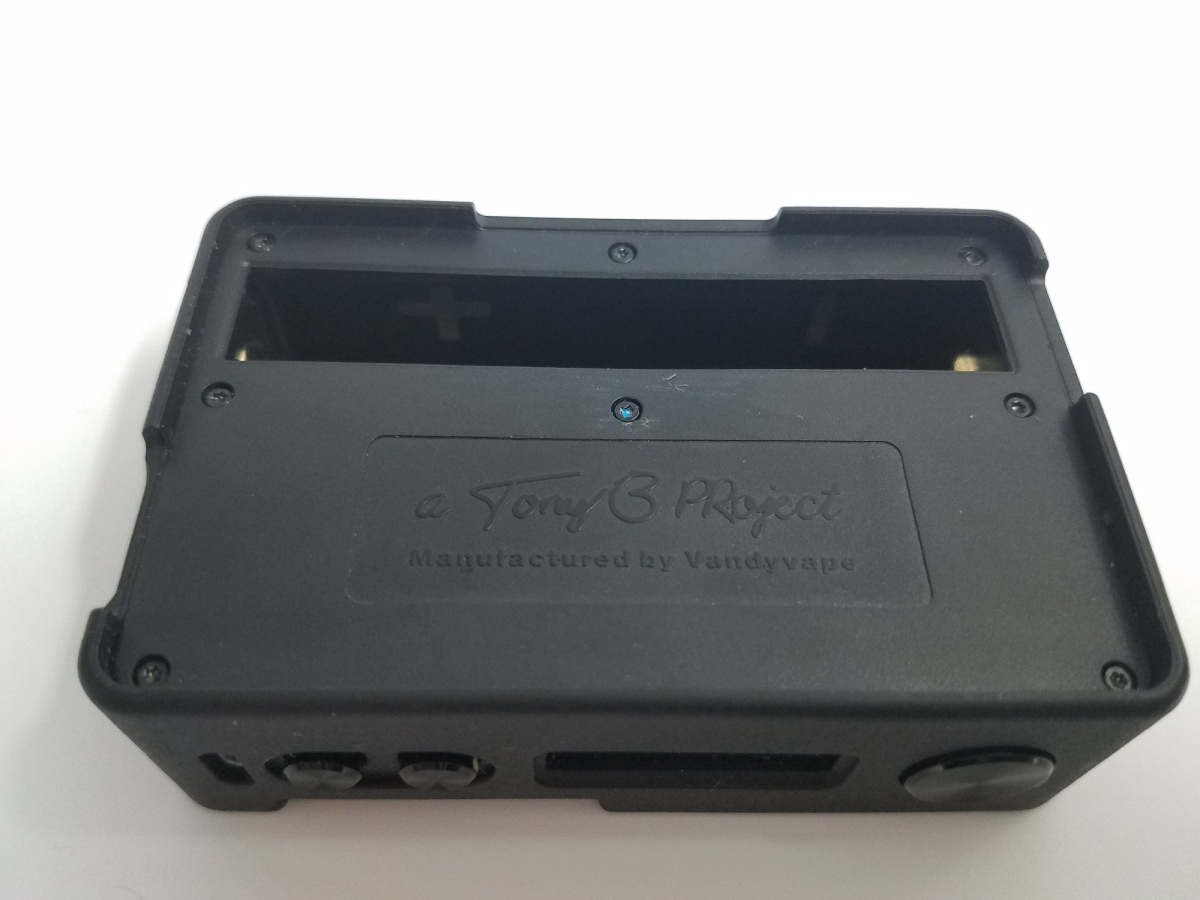 If remove the backplate, you’ll see that the back of the device can be removed. These little screws are T4 Torx screws if you’re wondering. Also, if you take it apart, know that there’s a small screw underneath the small blue sticker, so don’t break the cover by trying to tear it out.

After removing the cover, you’ll see the internal components and how this is all assembled. 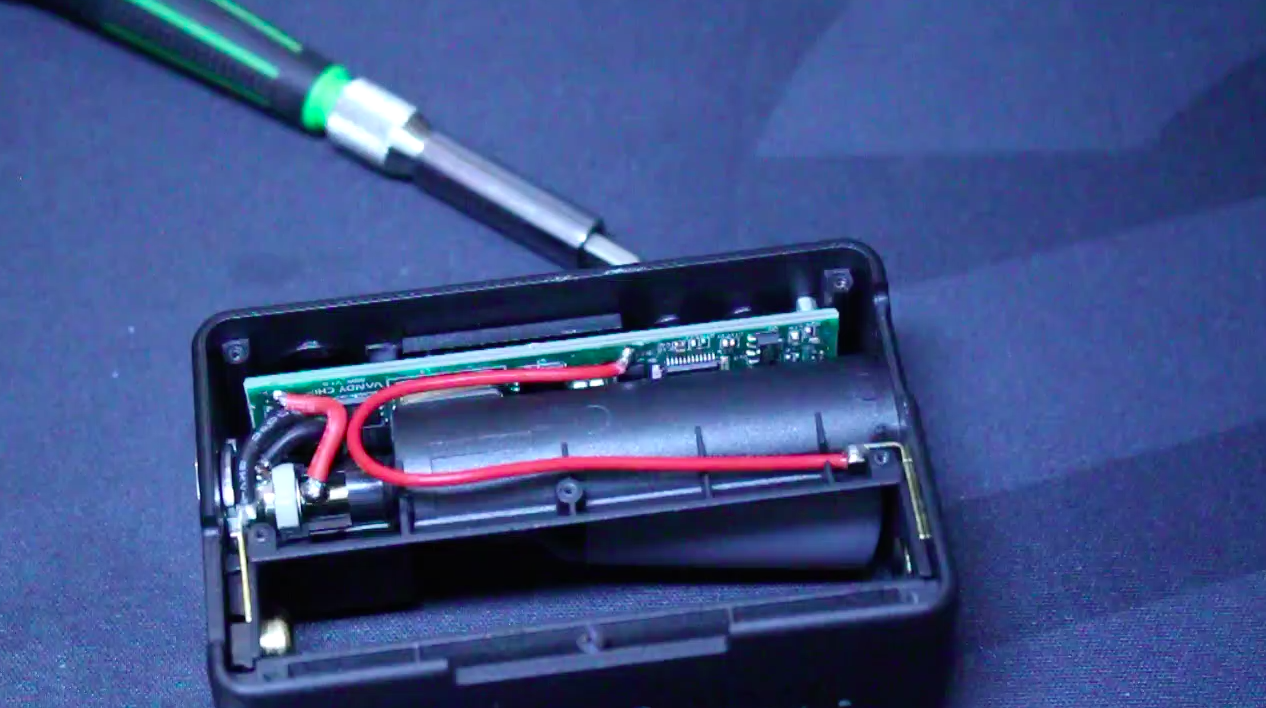 This is why Vandy Vape is claiming that the 510 connector has an anti-leaking design. There are several seals in here and also one you can’t see around the 510 assembly.

Everything inside looks good to me but I’m no electronics expert! 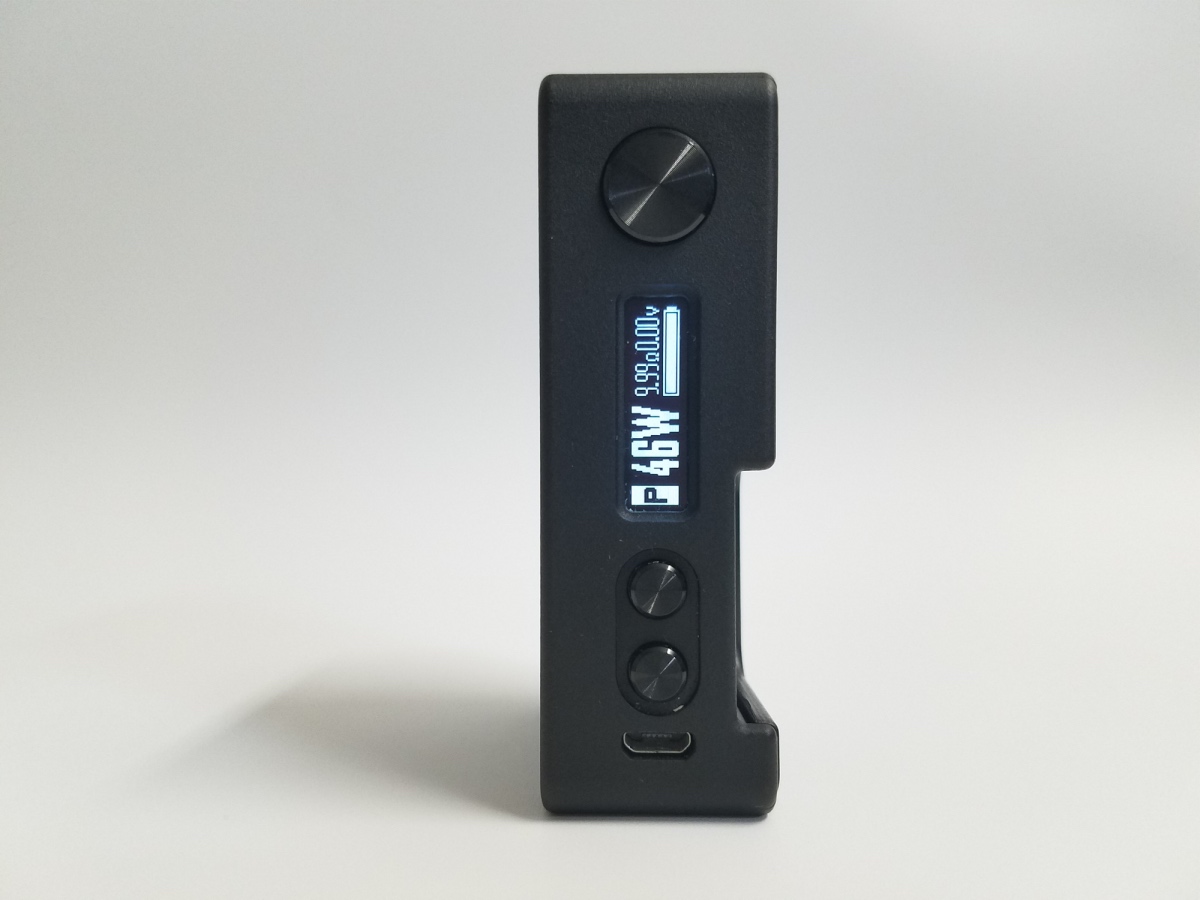 It has a very clean front panel, which has:

The Vandy Vape Chip and Functionality 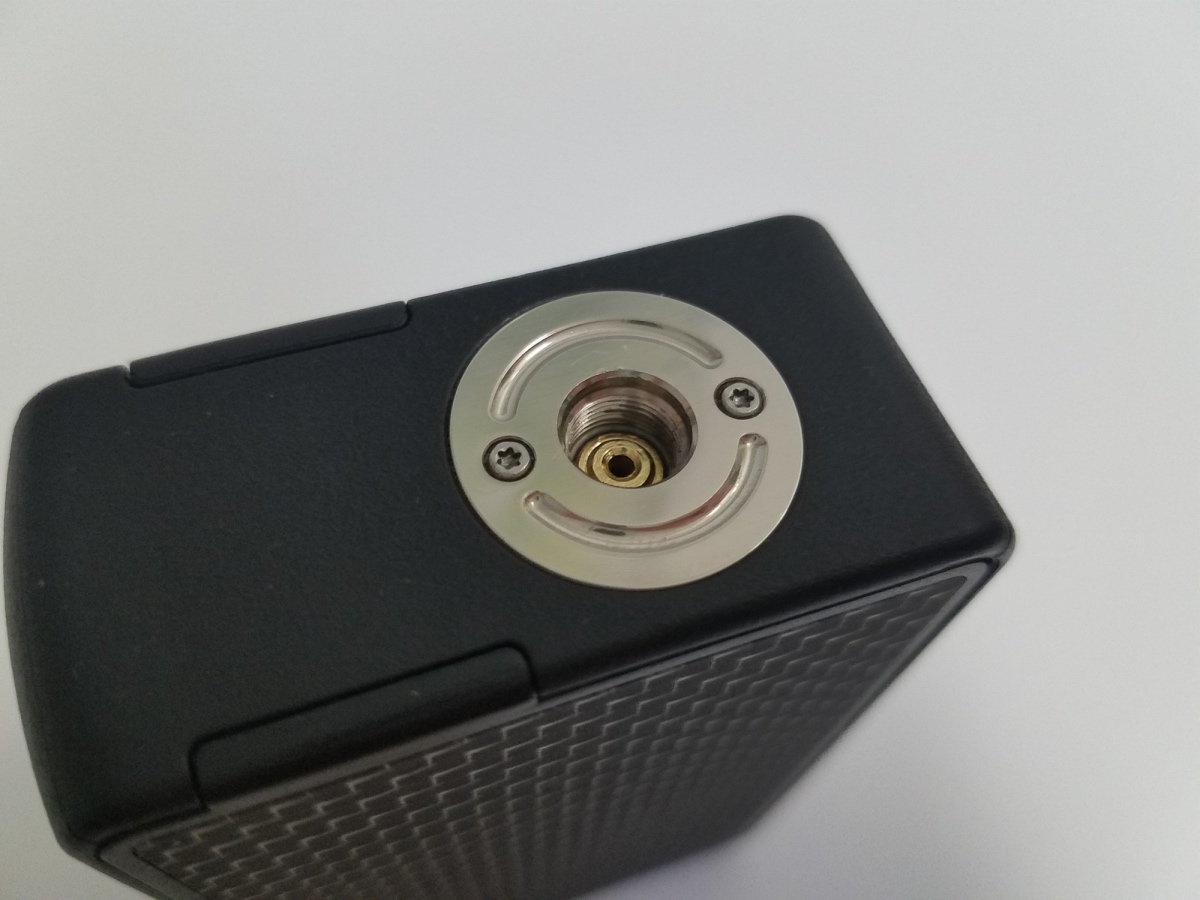 The Pulse 80w uses Vandy Vape’s new chip technology, called the Gene chip. It has all of your typical safety protections and it seems like a really nice chip. And it’s pretty damn fast. It fires immediately with no delay whatsoever. It fires so fast that sometimes it fires on me when I’m trying to turn it off or change settings.

And a feature that I think is really cool with this chip is that it detects the build on your atomizer and tries to automatically match the power that it thinks will work best for the build. For example, if you’re using a 0.3-ohm build, it will set it at 42 watts. I’ve found this feature to work pretty well.

When the device is on, press the firing button three times fast to get into the menu.

You have power mode, bypass mode, and several temp-control modes. 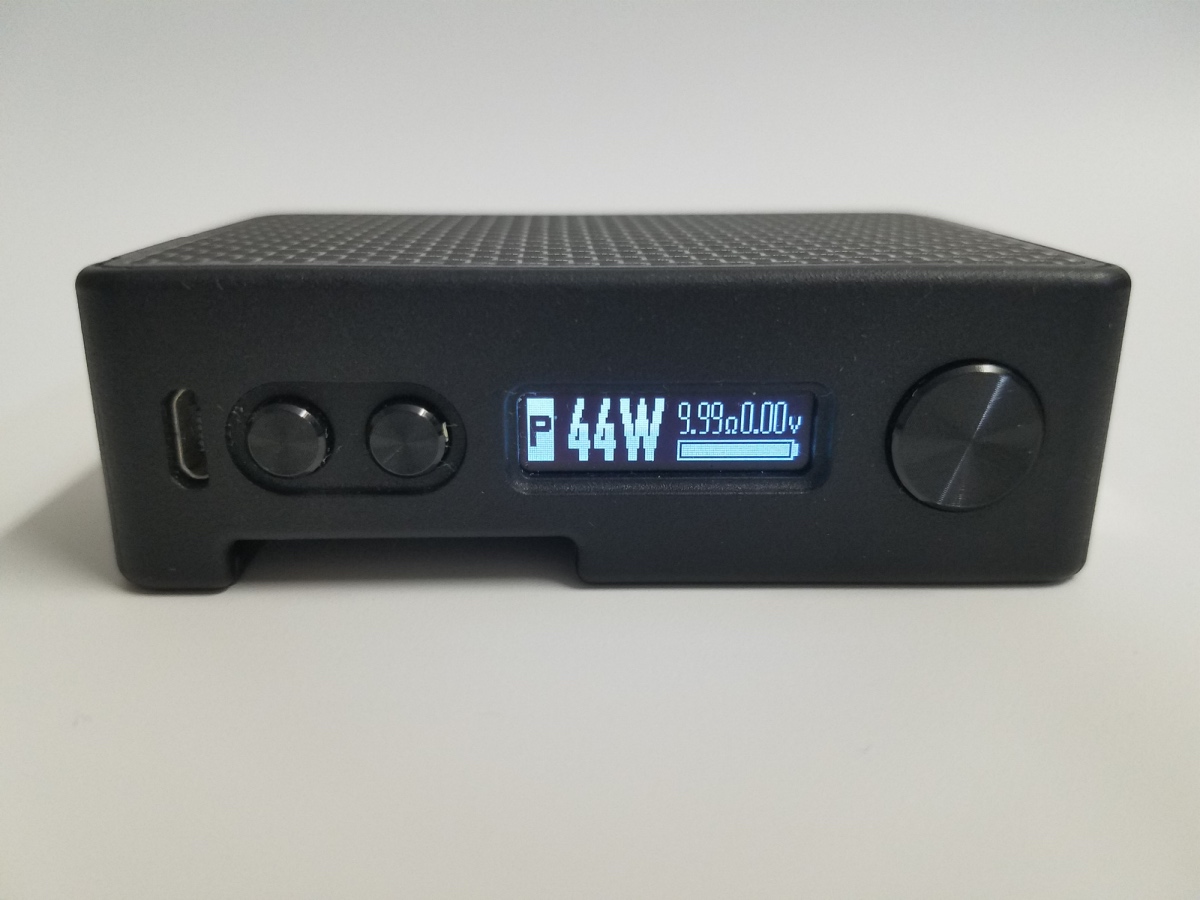 Bypass Mode: This makes the device work like a mech mod, but with regulated safety features. This powers your atomizer based on the level of charge of your battery. The manual says that the best range to use in this mode is 0.08 to 0.15 ohms. 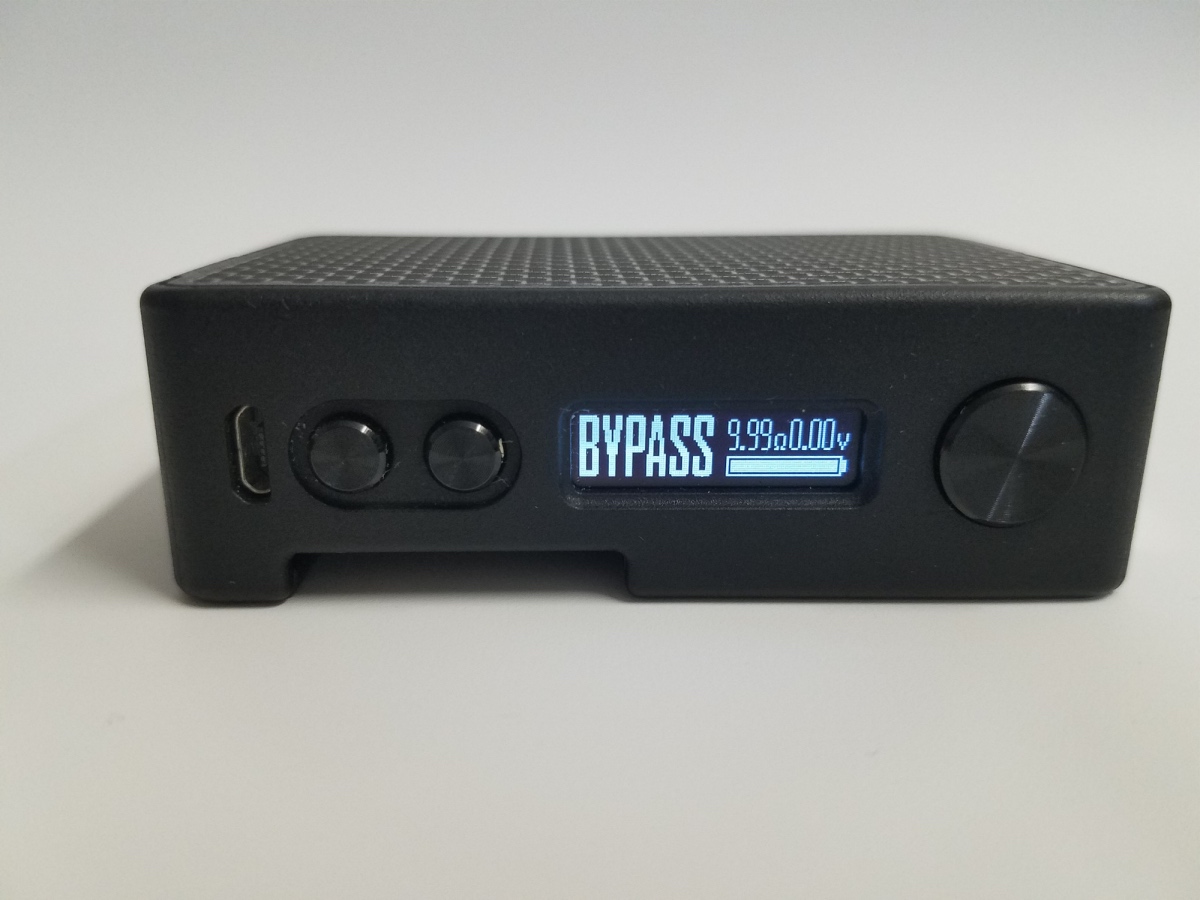 Temperature Control Mode: Within this mode you have the option to use Ni200, Stainless Steel, and Titanium coils. If you press the firing button 4 times while in any of the TC modes, you can adjust the wattage that it starts at.

Outside of the various modes, you also have some other features:

If you press and hold the firing button and the up button at the same time it locks the device. You can’t change the wattage settings or fire the device when it’s locked.

If you press and hold the firing button and the down button at the same time it will flip the screen. 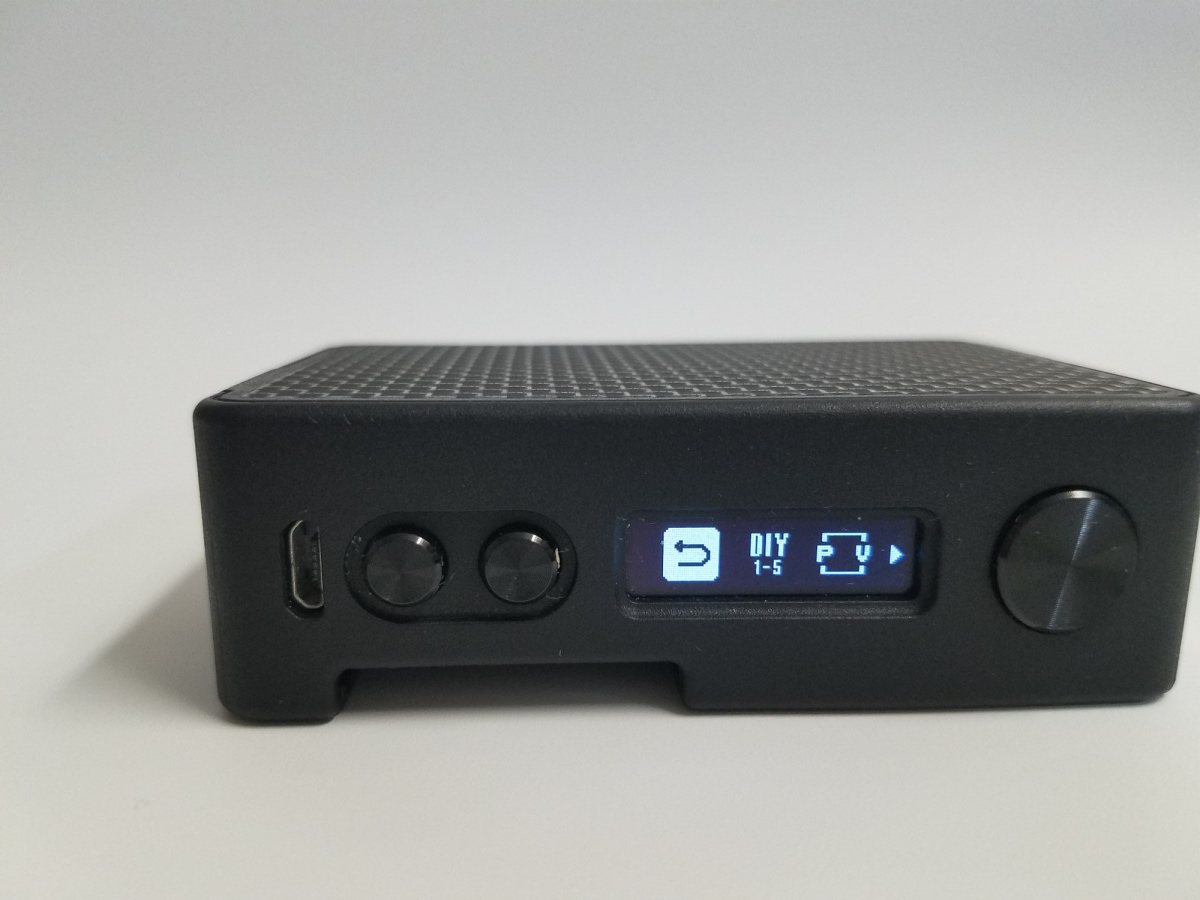 If you hold the up and down buttons at the same time, you enter a secondary menu. This menu is a little different depending on if you’re in power mode or temp-control mode:

In power mode, you can set custom curves and switch between power mode and voltage mode.

In the temp control secondary menu, you can set custom curves, lock in your resistance, and you can set TCR values.

P-V Option: Here you can change the device to adjust based on voltage instead of wattage. This is probably more for the hardcore or old-school vapers since voltage settings are what we used to use. It’s a nice little feature if you want it. You can adjust voltage from 0.5 – 8.5 volts. 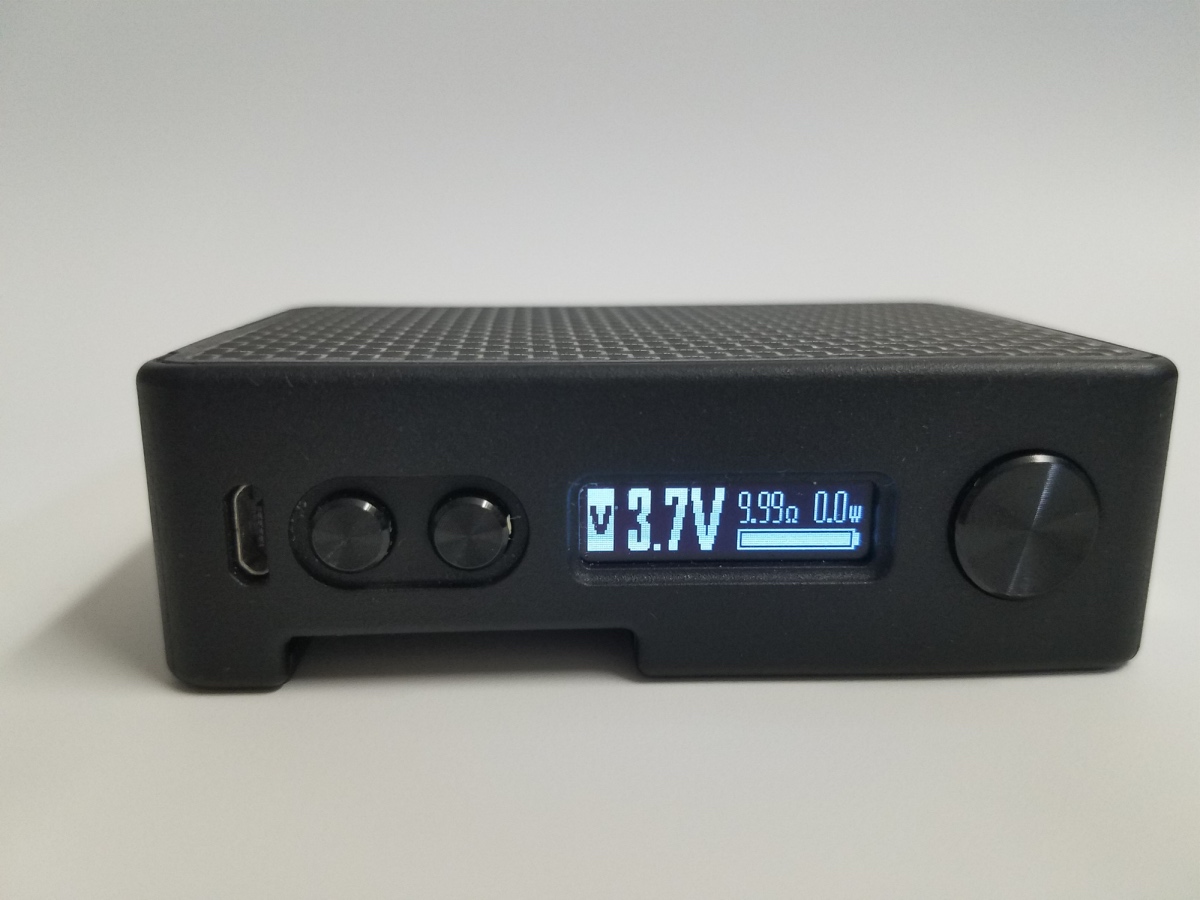 Resistance Lock: This basically gives your device a reference point of what your atomizer is built at when at room temperature. TC wire resistance fluctuates while it’s being fired, so locking the resistance helps the device understand what the base resistance is and makes it work correctly.

TCR: TCR lets you adjust the temperature coefficient resistance of the specific wire you’re using. For example, a lot of devices will set a generic TCR for stainless steel, but there are different types of stainless steel which have their own TCR values, so you can set that in the device to get more accurate temp-control.

The last two options in the secondary menu let you see the ID of your device and the firmware version you’re running. 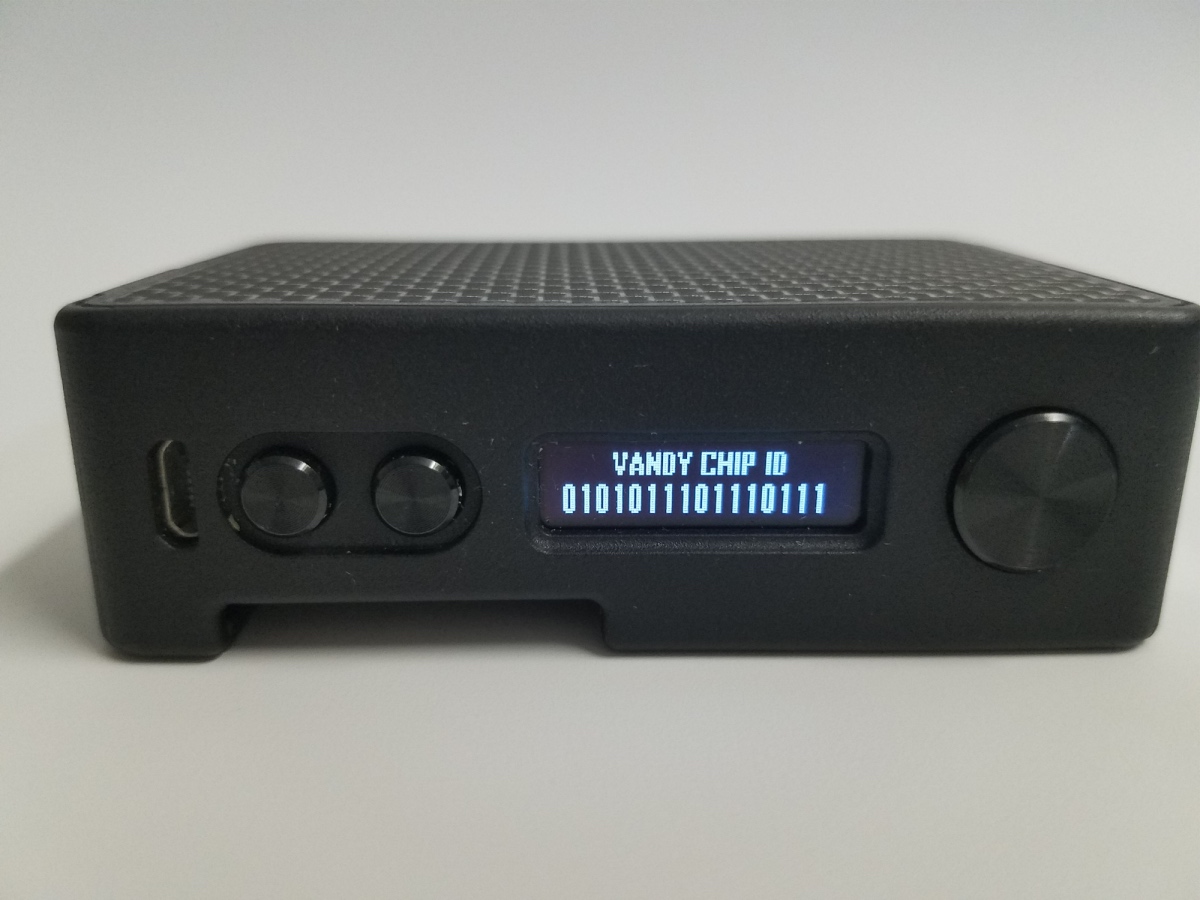 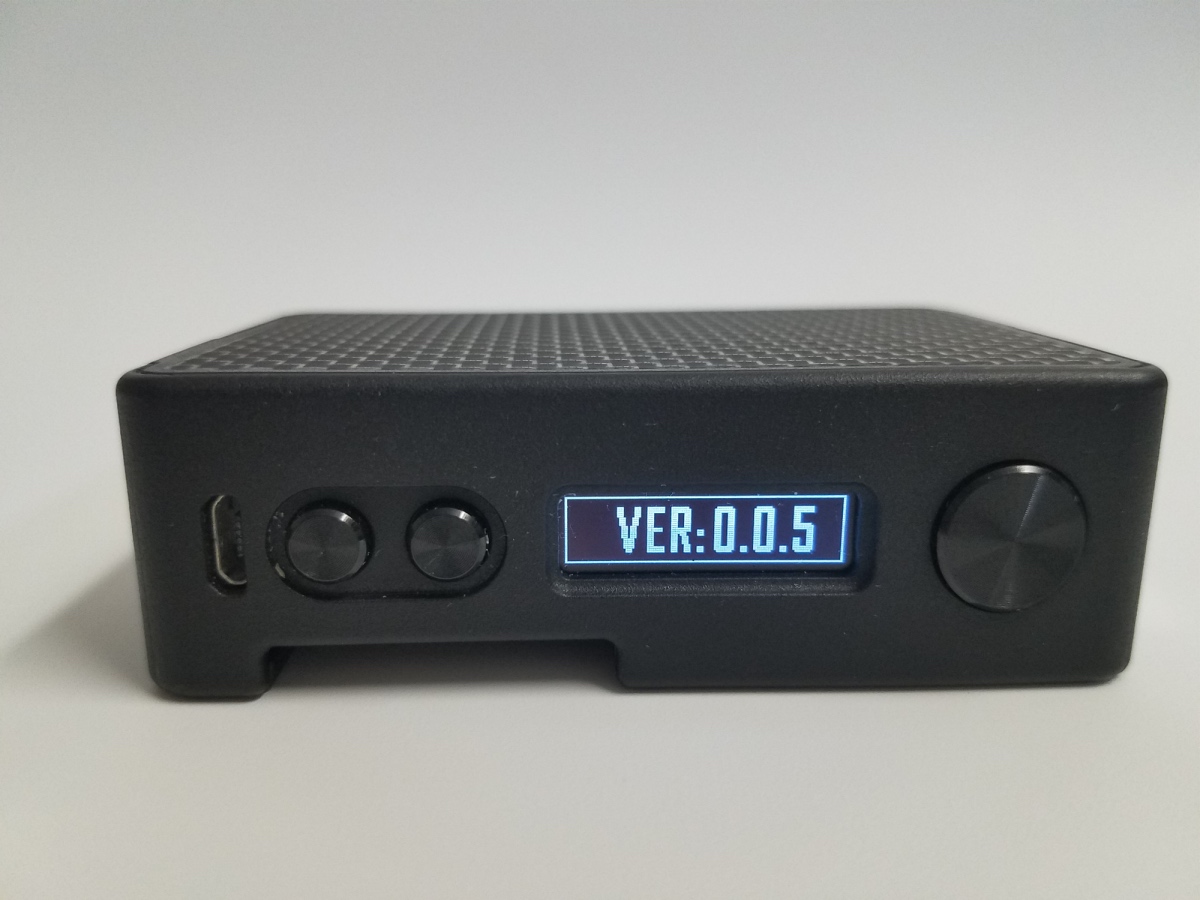 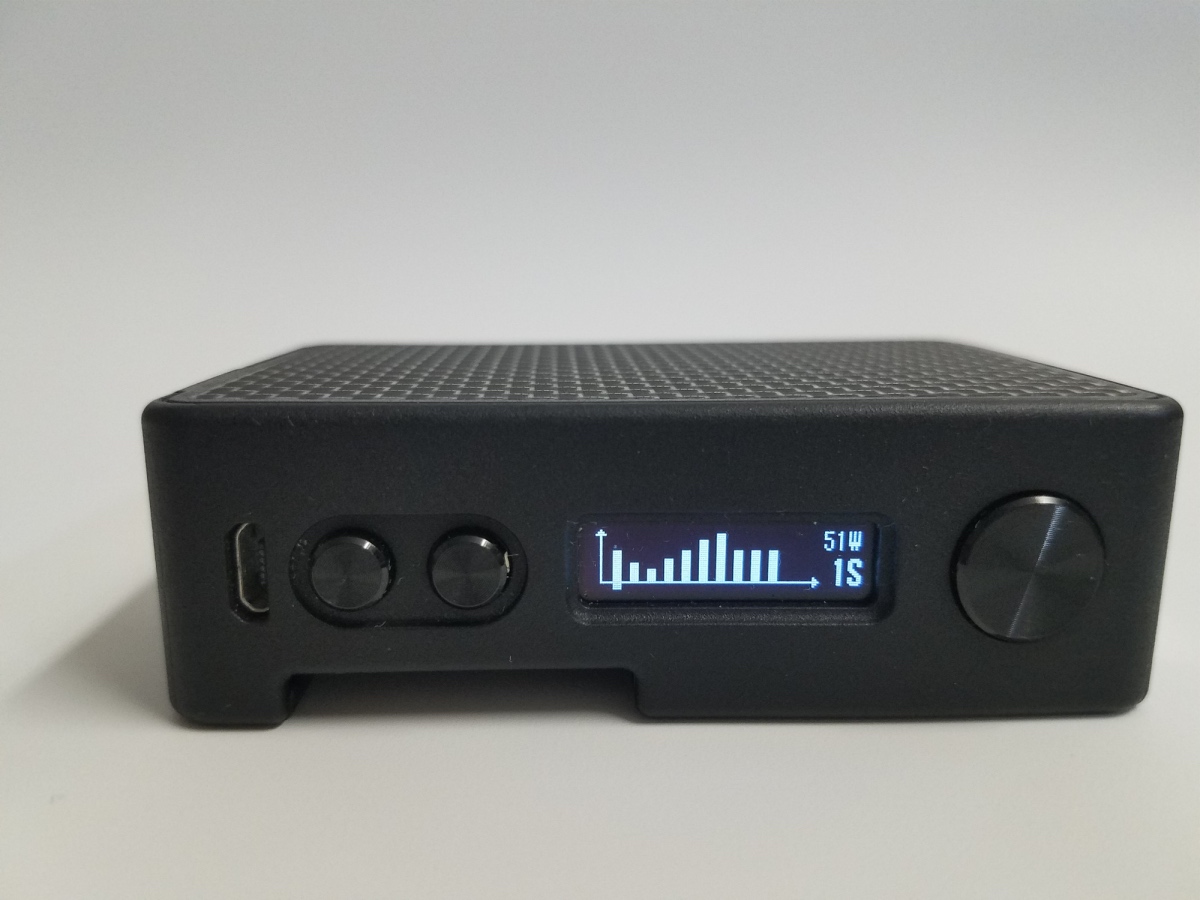 DIY 1-5: Here’s where you can set custom curves. You would use this to change how the Pulse vapes over the course of several seconds, for example, if you want the device to fire at 50 watts on the 1st second and then immediately drop to 30 watts for the next several seconds, then drop again to 15 watts on final few seconds, you can do that. You can customize the wattage for every second of your hit, up to 10 seconds.

This works the same for Temp Control mode, except that you change the temperature for each setting. 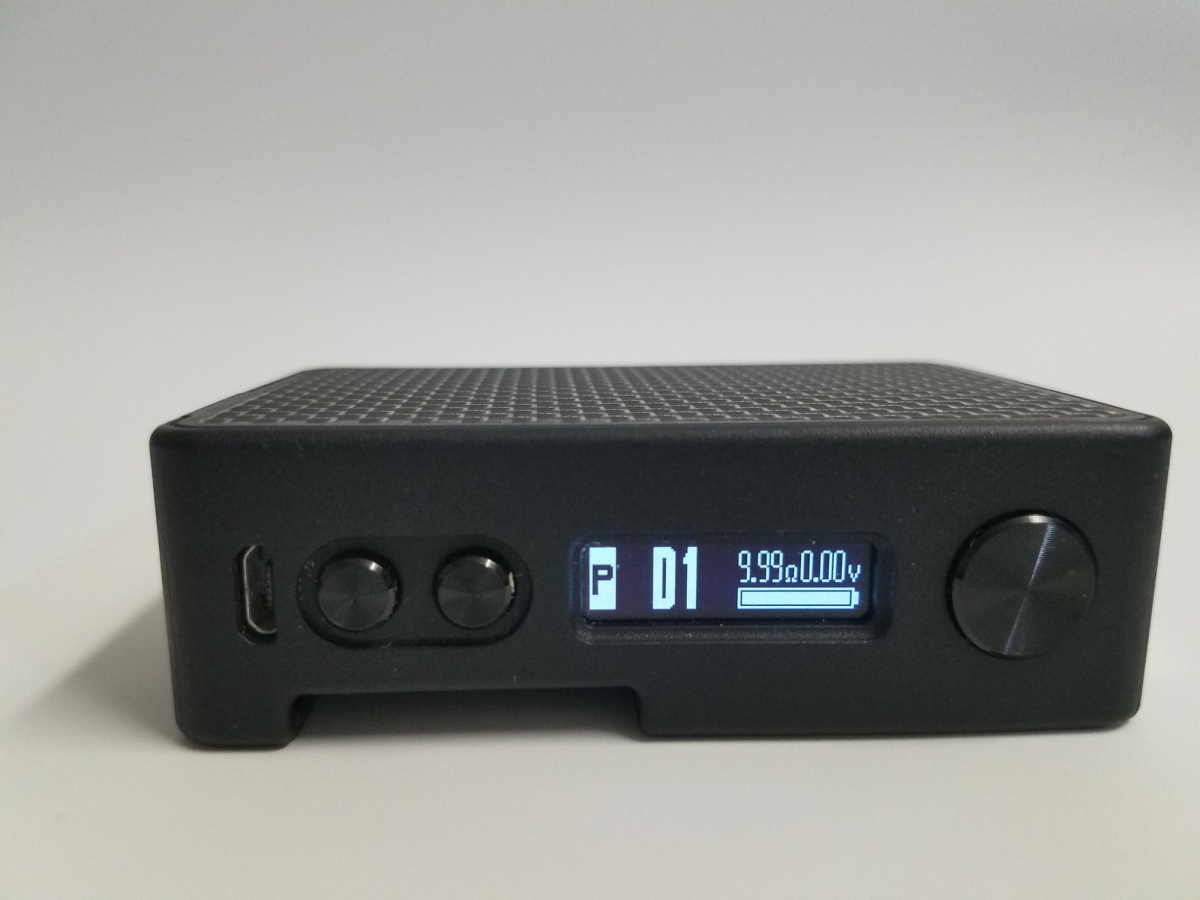 While in the D menu, you vape right from there. You don’t need to exit. If you do exit, you’ll go back to regular mode and you’re no longer using the custom curves.

So that’s it for curves. 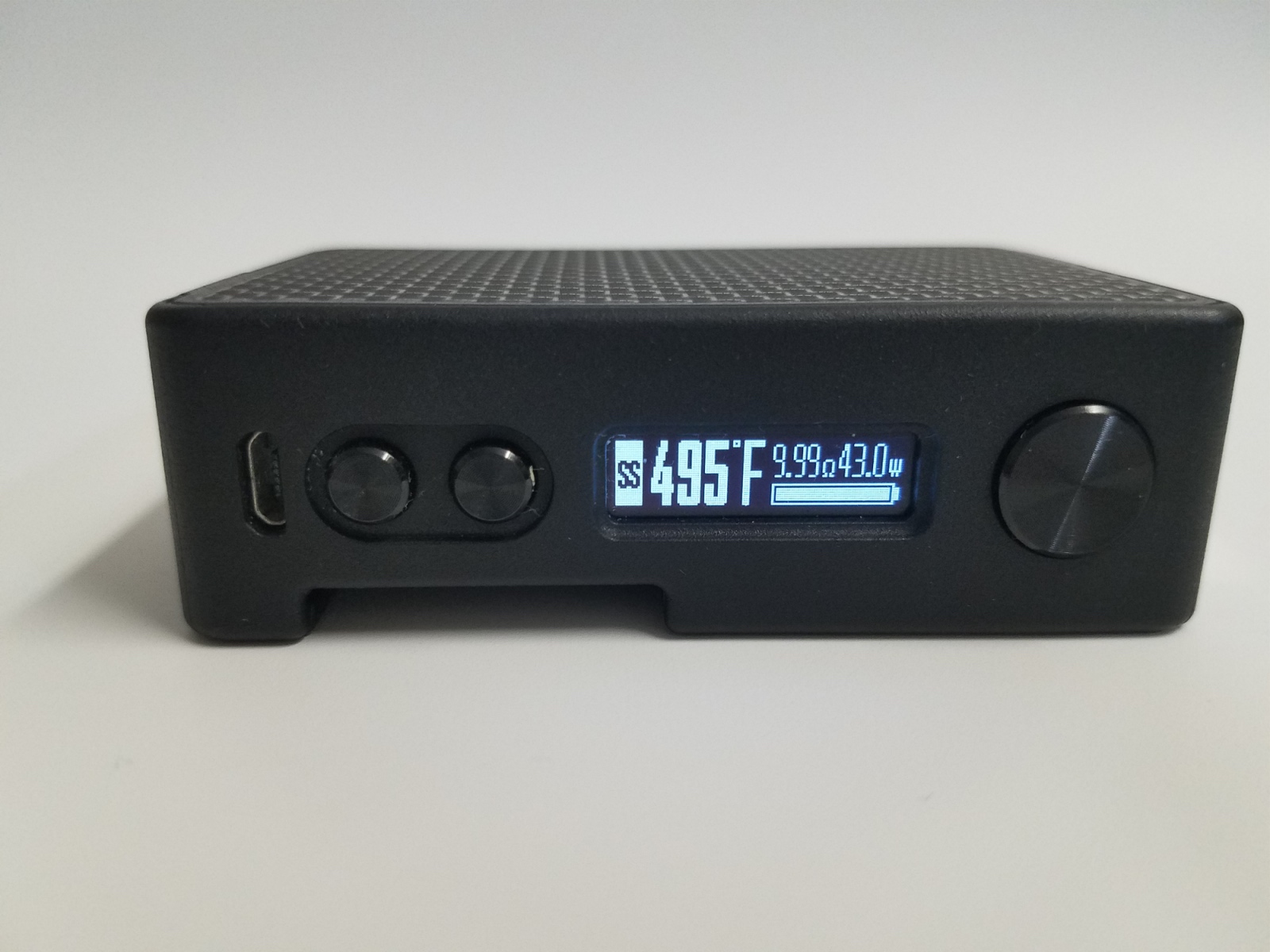 Ok, as for how temp-control works, I don’t use temp-control so I’m not a pro. I have been using it exclusively for past two weeks so I have enough experience with it on the Pulse to talk about it. Basically, it works okay. It slows down the chance of getting dry hits, but you can still get a dry hit pretty easily.

Many people have already talked about the performance of TC mode in the Pulse and I’m just going to tell you what every else is saying. Basically, firmware v0.0.5 works decently enough, but if you update the firmware to v0.0.6, temp-control works poorly. A lot of TC users are actually downgrading back to v0.0.5. So just a heads up on that. I’m sure Vandy Vape will release an update, but as of right now, if you use TC, don’t update the firmware.

You can do firmware upgrades on this and Vandy Vape has already released one update and has made the original firmware available if you need to downgrade. I haven’t updated my chip yet, so I can’t tell you much about it, but here’s more information about that.

The squonk bottle capacity is 8ml, so that’s pretty good to me. The bottle is tinted dark, but it’s still pretty easy to see the juice level. The metal screw cap on the top of the squonk bottle is manufactured very well and has nice threading. The tube inside is cut at an angle and it sucks up e-juice perfectly. And the bottle isn’t too soft and it’s not too firm. It feels just right. 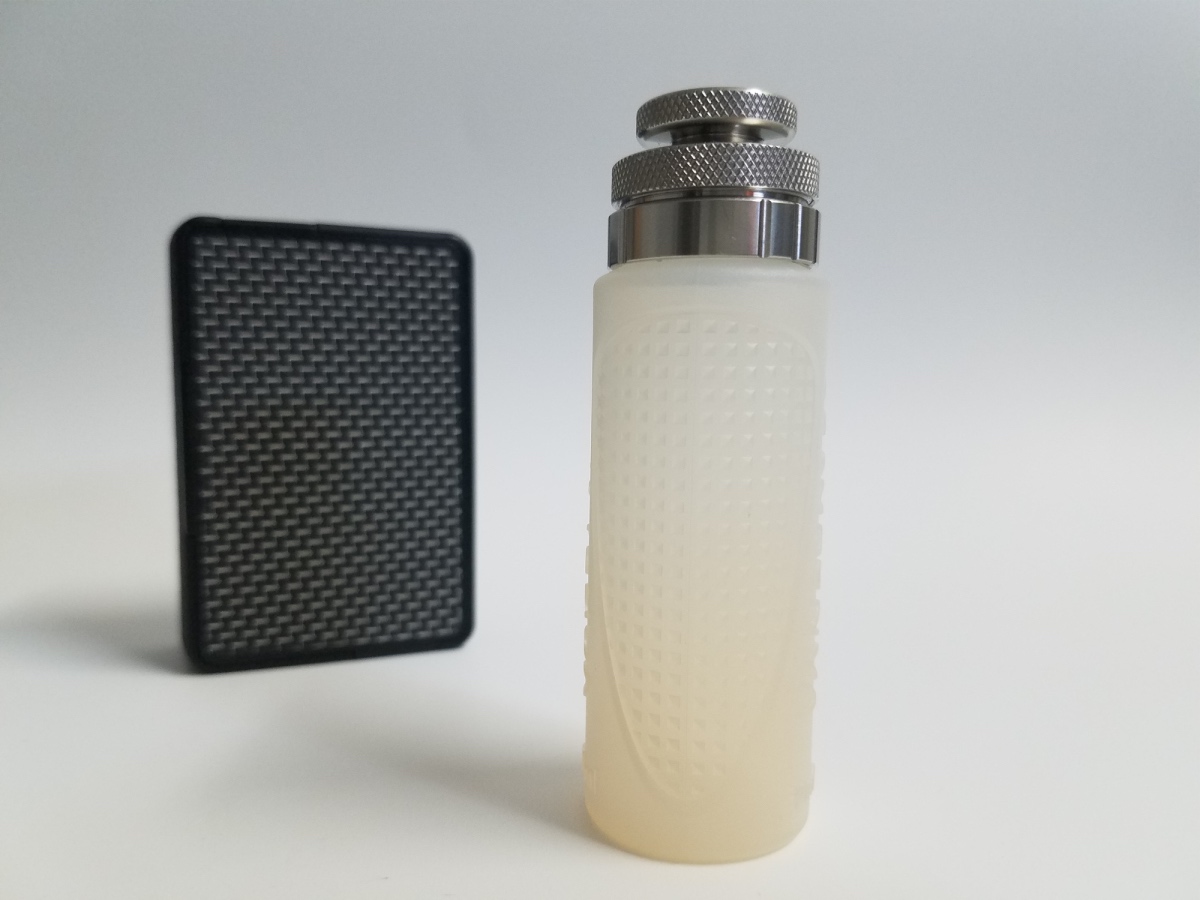 If you get the high-end version, you also get this squonk refill bottle. I’ve been really skeptical about the usefulness of these ever since they came out more than a year ago. I just never felt like it was hard to take a squonk bottle off to refill it. But after using this refill bottle, I feel stupid for not buying one a long time ago. This makes refilling squonkers so easy and mess-free. 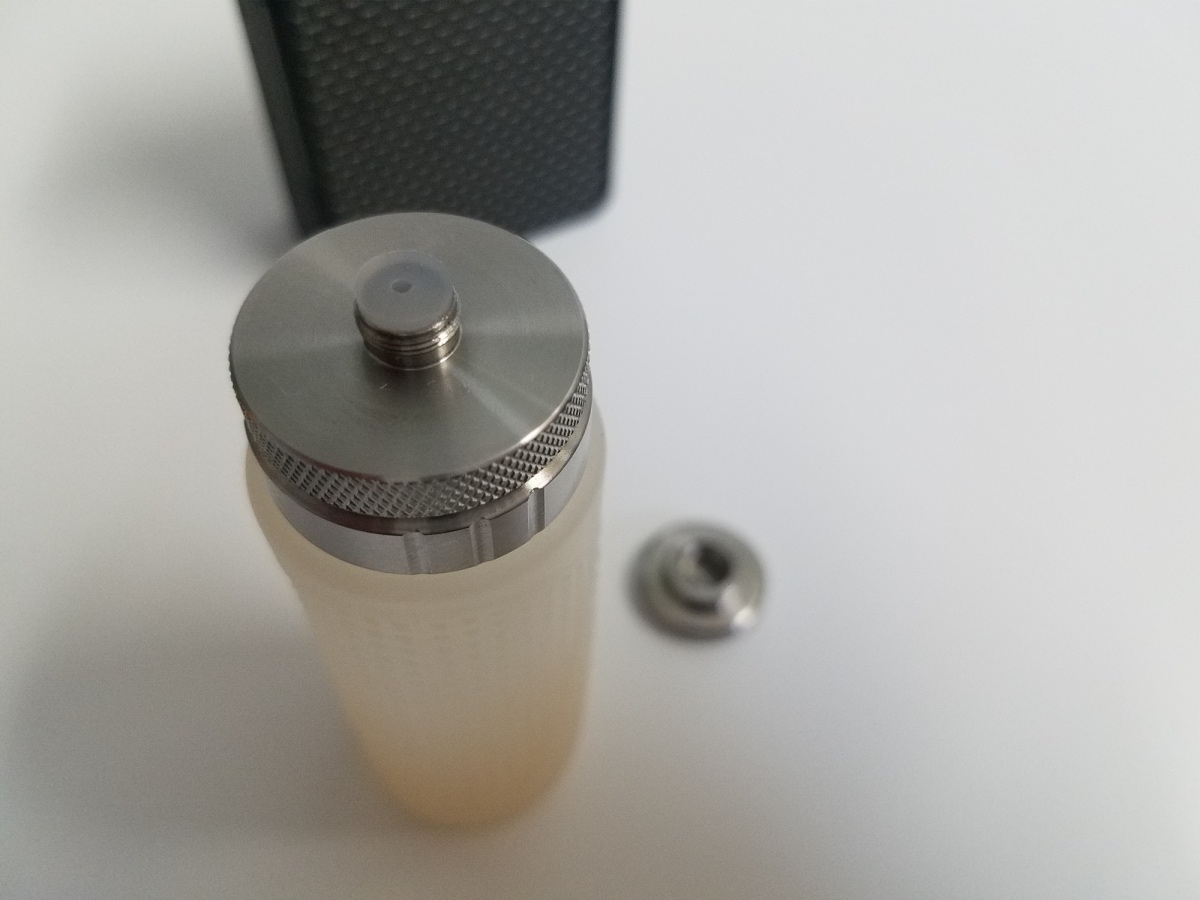 I thought it would be a pain to clean it out every time after using it, but I don’t even clean it. I always change flavors in my atomizers without changing cotton or coils, so I figured a few drops in the bottom of the refill bottle is the same thing. So that’s how I use it. But if you did want to clean it, it’s not hard either. Add a drop of soap, a little water and shake it up. That’s good enough for me. 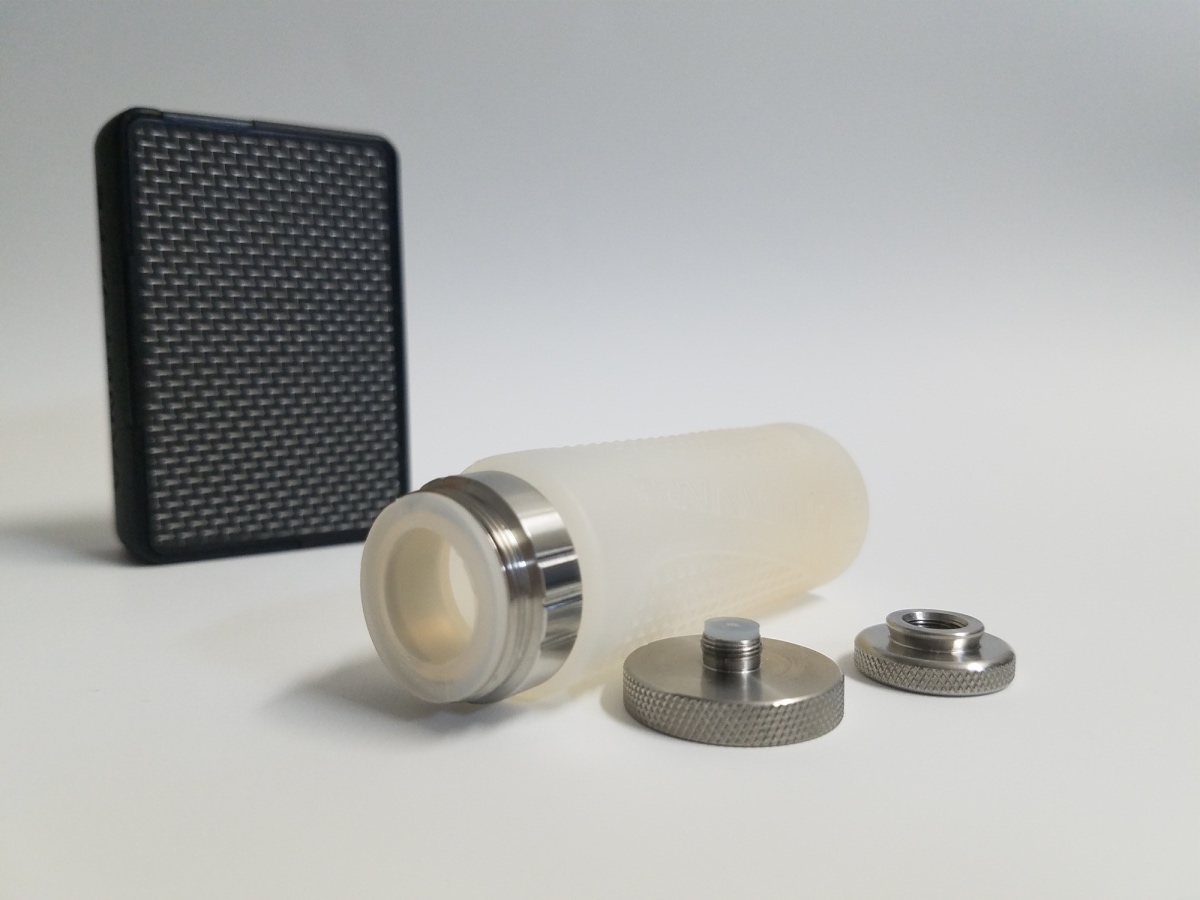 Using the bottle isn’t intuitive if you’ve never seen how to use one. I tried using it without watching a tutorial and I learned the hard way. If you fill it up, screw it on and just try pushing e-juice into the squonk bottle, you’ll push e-juice and air into the bottle. And when you take the refill bottle off, the pressure pushes the e-juice out of the top of the device. That’ll make a huge mess. 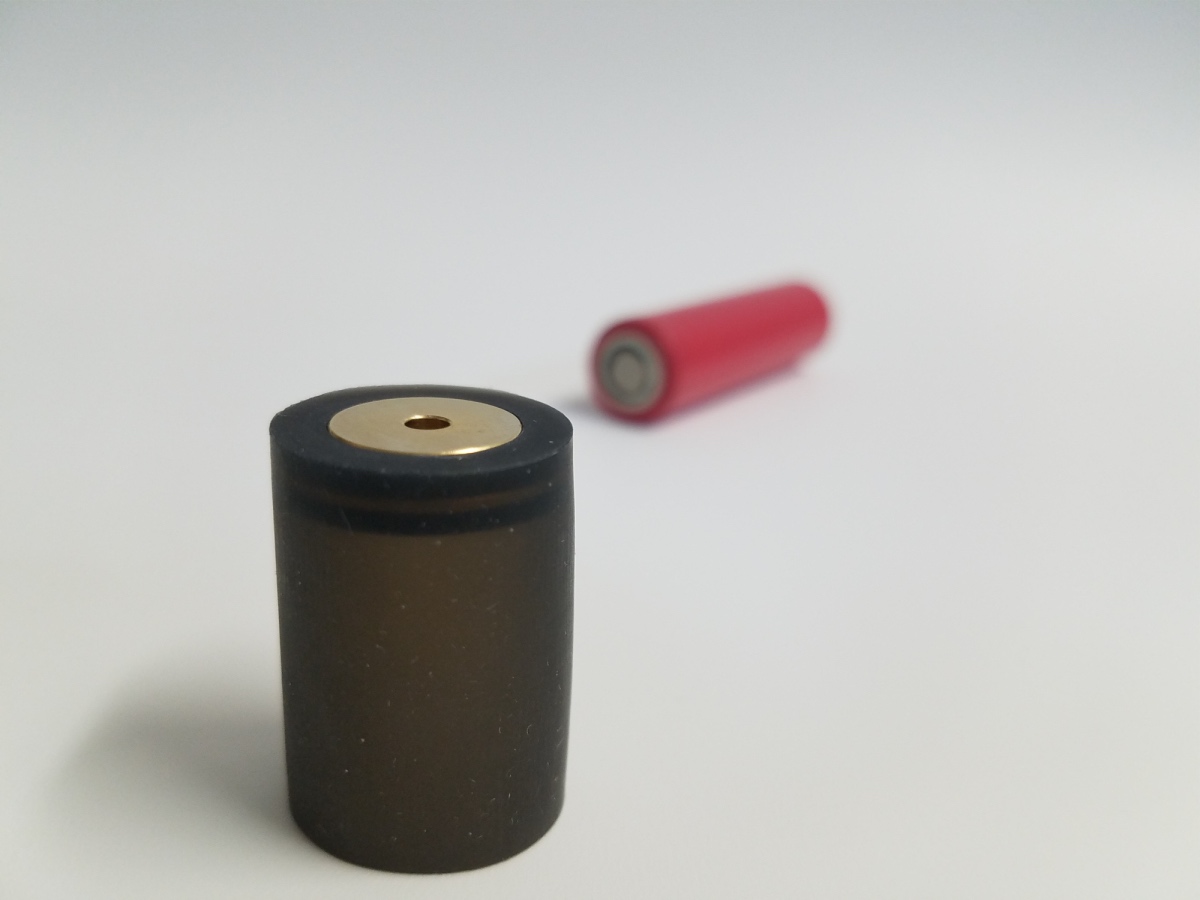 The device comes with a USB cable which allows for both firmware upgrades and to charge your device. So you can charge your battery directly in the device. You can also use the device while it’s charging, but Vandy Vape recommends that you don’t. 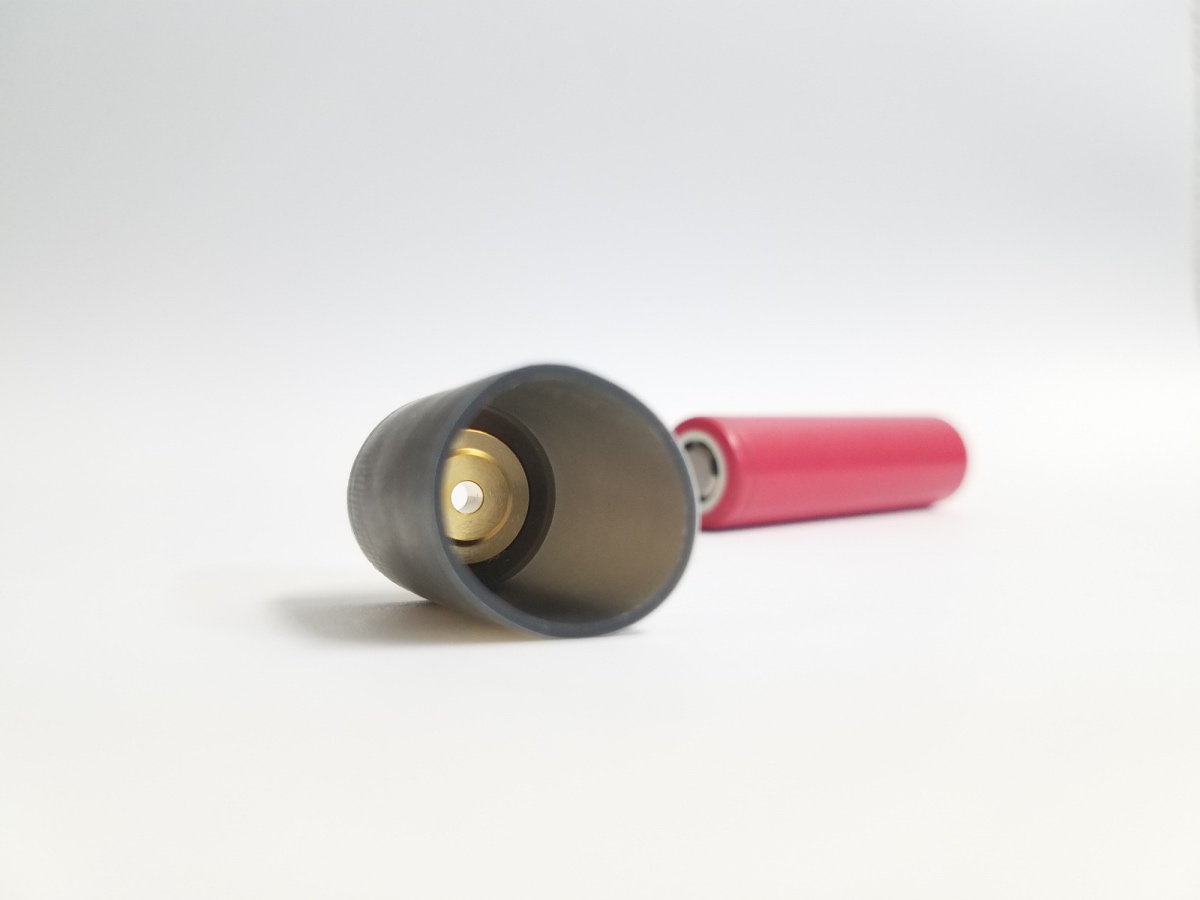 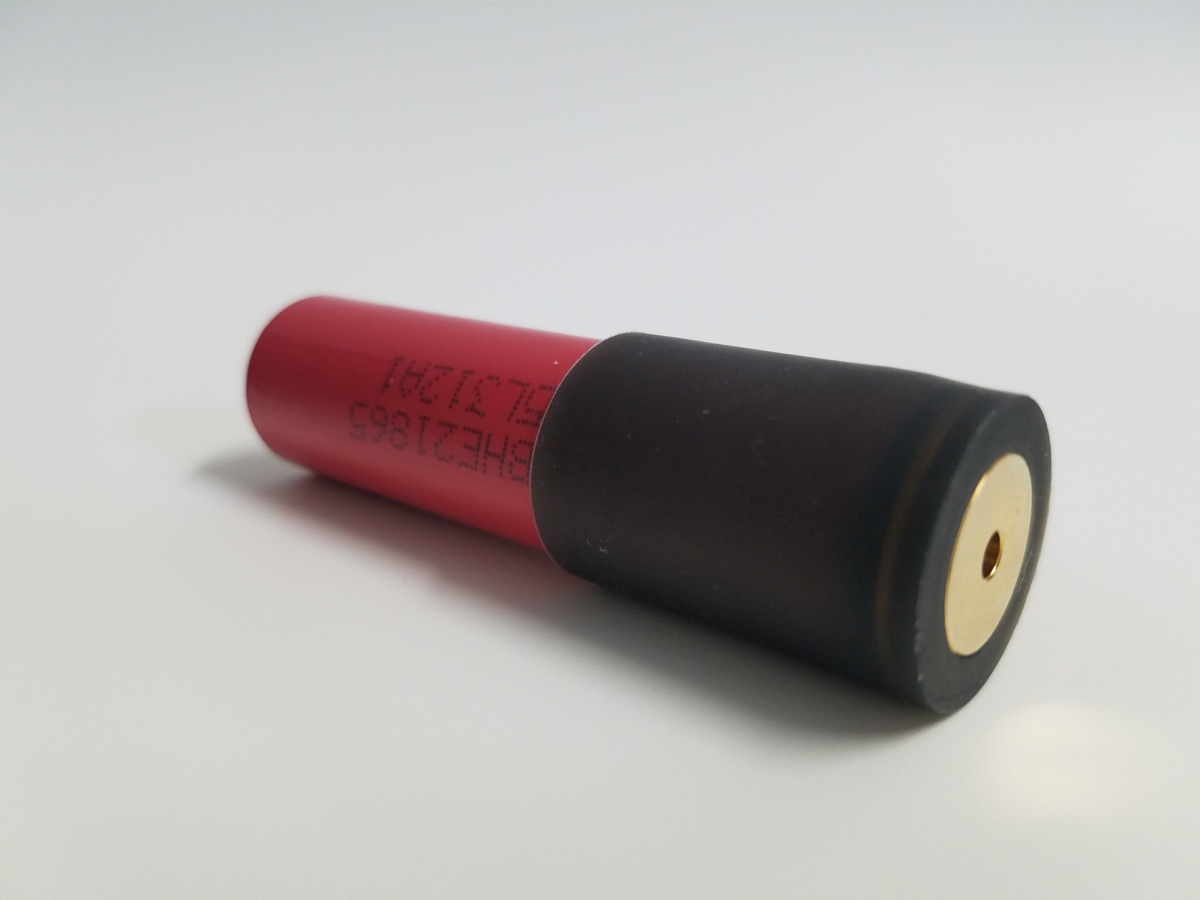 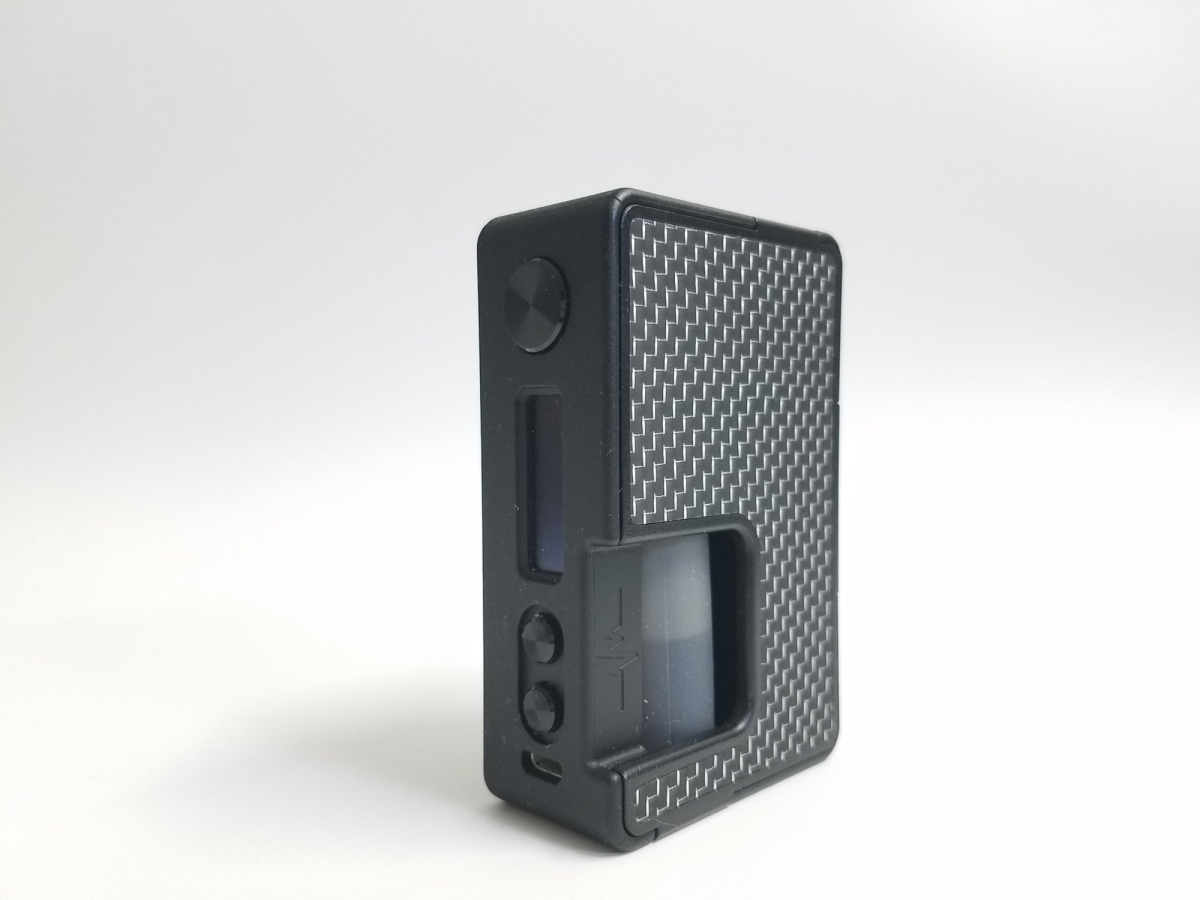 I think I’ve covered everything, but let me know if you have questions.

Overall, I think the Pulse 80w is an awesome device. It fires so damn fast, it has a ton of features to customize your vape, it’s comfortable, it’s light, and it looks really nice. The only con that I really have is that the temp-control seems to have issues, but hopefully, Vandy Vape fixes that in a firmware update.

The price for the 80w Pulse is different depending on the package and the plate designs, for example, the resin plates are about $10 more than the carbon fiber models, but you can get it from Sourcemore.com for anywhere between $68 and $85 with free shipping.