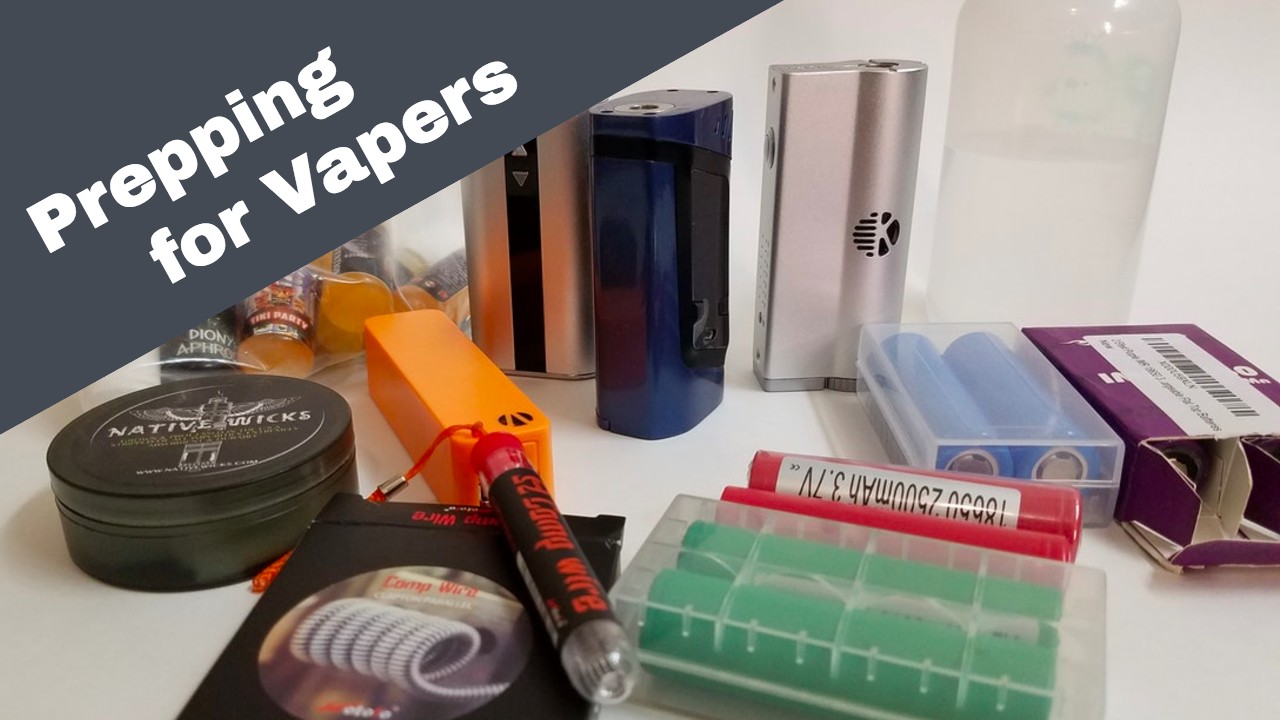 I want to start out by saying that this segment has nothing to do with prepping as far as food, water, heat, or sanitation is concerned. I’m not a prepper and if doomsday happened, I’d probably be one of the first people to die. Well, I might live to Season 2 of the Walking Dead, but probably not much longer. Anyway, I’ll only be talking about how to prepare for a disaster as it relates to vaping. As for the other stuff, you’ll need to figure that out on your own.

With Hurricane Harvey finished and Hurricane Irma probably down to a category 1 storm by the time you listen to this, this advice is a little too late for anyone who has suffered through these recent natural disasters, but things like this will happen again and it’s never too soon to prepare for a future disaster.

In the case of most major natural disasters like floods, earthquakes, and tornados, the biggest issue you’re likely to run into as a vaper is that you won’t have electricity. Since electricity is a necessity for charging your batteries, it’s obviously pretty important for vaping.

And it doesn’t need to be a natural disaster either. Some places around the world have to deal with rolling blackouts due to the inability to keep up with energy demands. Or a major electrical line in your neighborhood might go down. Or it might even be an overnight power failure that lasts no longer than 4-6 hours. For some people, even small power outages without a fully charged e-cig can result in smoking a cigarette.

So what can you do?

First, I’d recommend getting several sets of batteries, having multiple devices ready if you need them, and charging everything up fully. That’s a good start.

Many preppers go all out and buy generators, such as portable models that cost around $300-400 that can keep your fridge and other appliances running or more powerful models that can power your whole house for $1000-$2000 or more. That’s a pretty big investment. If you just need something for small electronics, you can get a small generator for as low as $130 that can provide 1000 watts of electricity. It won’t power a fridge, but it’s more than enough to run several lights sources, power radios, and run battery chargers. Just remember that these need to be kept outdoors usually since they will cause Carbon Monoxide (CO2) poisoning if it’s running in your house.

If you have access to an automobile and you’re able to turn it on, that’s another source of temporary electricity. You can get a power inverter that plugs into the car’s cigarette lighter that will turn the car’s DC power into AC power. The inverter has plugs just like you’d find on the walls in your house. You can get these for anywhere between $20-$40 at places like Target and Walmart and they work great. I actually use one of these every time we travel to visit my wife’s family because it takes about 2 hours to get there so I plug in my laptop and get work done while on the road.

Another option is to buy portable power banks. Power banks typically have large batteries, or multiple sets of batteries, that allow it to store a lot of energy. For example, I’ve seen one on Amazon that holds 20,000mAh of charge and it has 2 USB ports so that you can plug in your phone or other USB-rechargeable devices. You can get large 20,000 mAh models for around $40 or smaller models for less than $20, depending on your needs. You can also find power banks that have solar chargers built in so that they can constantly charge back up.

And finally, while on the subject of solar energy, consider buying a solar charger. You can find foldable solar panels that have USB ports built in that provide around 16 to 22 watts. Something like this would take a long time to charge a large vape device, but it can be used to charge smaller devices or even store power to refill external power banks.

In a situation where you’re without power, try to conserve as much as possible so that you have it for when you really need it. For example, instead of using your flashlights all the time, consider using candles and matches, or hand crank or solar lanterns.

Personally, I would have a hard time justifying the use of power banks for vape gear when they should be used for things like cell phones and radios, but hey, if you’ve got enough of them, it might not be a big deal.

Ok, so that’s all I’ve got for external power. Now let’s talk about the other stuff.

You obviously need enough e-juice to get you through a period of time where none will be accessible, maybe enough for a couple days or even a few weeks. It can get a little pricey to stock up on that much e-juice all at once, but if you have the cash, go for it. If you don’t have that kind of money, go for the basics necessities. You can get a gallon of Vegetable Glycerin for $30, 250ml of nicotine for $25, and then just reuse your old e-juice bottles. That’ll last you months or even longer. If you want to spend a little extra, you can get some clean bottles for a few bucks and a few flavors for a $1-$3 each. You can mix these up in bulk and have them ready if you need them.

In the case of flooding, such as with hurricanes, you need to keep your e-juice bottles and ingredients in waterproof containers. If they are under water, they will get contaminated and won’t be safe to vape. You can buy waterproof containers for around $20 from Amazon or large waterproof duffel bags from places like Cabelas.com for $120.

One tip that I’ve seen showing up on Facebook lately is to store important items in your dishwasher since they lock tight and are waterproof. This is not true. In a flooding situation, your dishwasher will fill with dirty water and mud too. So don’t do it.

All that’s left is other stuff, like atomizers, cotton, coils, and building tools. If you’re in an emergency, I think rebuilding will probably be the least of your worries, but if you must have these things, just make sure they are in a bag ready to go and maybe also in a waterproof bag if there might be flooding.

I think that’s about it. If you have any extra tips to add to this, please let me know.