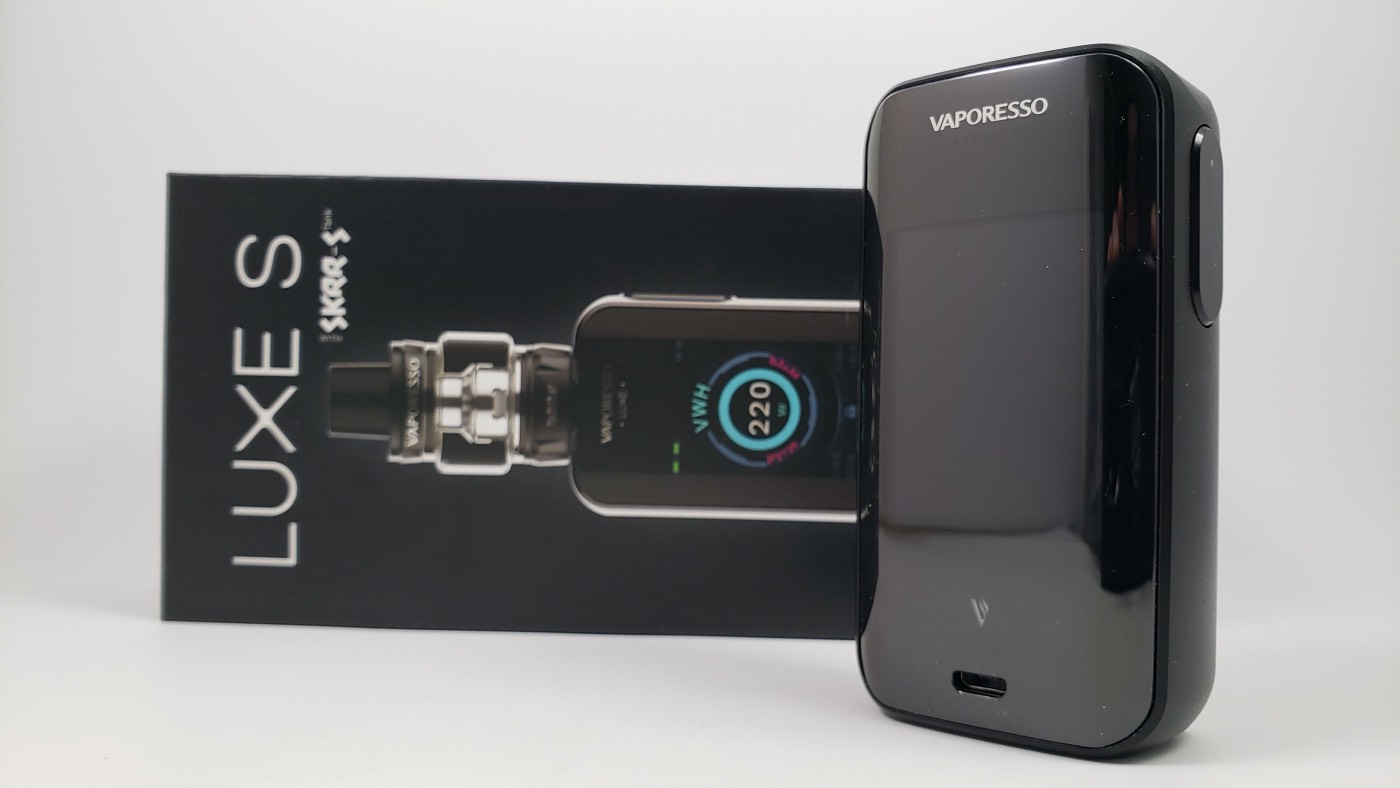 This was sent to me for review from Vaporesso. The Vaporesso Luxe S is a bit of an older one, having been released at the end of 2018, but it’s still a pretty cool device. This is a dual 18650 touch screen device. And if you’ve ever used a touch screen device before, you might be worried, but don’t worry, this one works well. The Luxe S looks really sleek. The body is stainless steel, the 510 connection is centered on the top, there’s a designer panel on one side of the device and a big screen on the other side. There are nine different panels to pick from, so you have plenty of options. The screen is a big 2″ edge-to-edge screen. Below the screen is a micro USB port for charging, and on the side of the device is a big long firing button. The size of the button makes it really nice and easy to fire. It’s firm and clicky too. Ok, let’s talk about that OLED screen. So like I said before, it’s a 2″ screen, so it has plenty of space to show details. You can see your battery life indicators for both batteries, the mode you’re in, your wattage or temperature, the resistance of your atomizer, the voltage, puff counter, and puff timer.

This screen is also has a touch screen, but the entire screen isn’t a touch screen – just the logo and the up and down buttons at the bottom of the screen respond to touch. The buttons are nice and responsive and they provide vibration feedback so that you know you’ve touched them. You can turn the vibration off in the settings if you don’t like it.

The Vaporesso Luxe S uses the OMNI Board 4.2. That probably doesn’t mean anything to you, but it’s a nice chipset that Vaporesso has used in a lot of their devices. In the Revenger device, they used the OMNI 2.0, which was an awesome board, so this one is several upgrades from that one. It fires extremely fast (0.001s according to Vaporesso), it works well, and it has a ton of features. The Vaporesso logo button is how you get into your settings. Three clicks of that button opens the menu. You’ll see a lot of stuff here.

Variable Wattage – The first three modes are variable wattage modes; one for hard, normal, or soft. The level you set dictates how hot it fires right off the bat.

CCW – This stands for Custom Curves. You can use this to set the wattage to specific wattages for each second of your hit. So for example, the first second can be set at 220 watts, the second at 100 watts, and the third second at 50 watts. You can set it however you like and for up to 10 seconds.

SP – This is Super Player mode. Vaporesso includes this in most of their high-powered devices. I’m not really sure why this is a mode that needs to be turned on, but basically what it does it allow you to use atomizers built at resistances as low as 0.03 ohm or as high as 5.0 ohm.

VV – This is Variable Voltage mode. It works a lot like wattage mode, but you adjust via voltage instead.

CCS – This is Custom Curves mode for temperature control, so instead of setting wattage for every second, you can set temperatures.

SS, NI, and TI – There are three pre-set temperature control modes – Stainless Steel, Nickel, and Titanium. Within each temp-control mode, you can also set a custom TCR value, you can specify the wattage you want it to ramp up to, you can adjust the power curves, and you can lock the resistance.

M1 and M2 – These are your memory modes

BP – Bypass mode gives you the ability to run your atomizer as if it’s a mech mod. So the power you get depends on the resistance of your coils and the charge of your battery.

Settings – Here’s where you can change things like the time and date, change the screen brightness, reset your puff counter, change the theme color, and you can turn off and on the Smart Mode, which is when the device tries to set the wattage to the perfect wattage based on the resistance of your atomizer. On the next screen, you can adjust the Auto On/Off feature, change how long it takes for the screen to timeout, adjust the brightness of the key lights, and you can change the strength of the vibration or turn it off entirely.

The designer panel is the battery cover. Pull that off to get access to your battery sled, which takes two 18650 batteries. The batteries pop into place and stay firm. There’s no battery ribbon to pull them out, but you don’t need one. The batteries are easy enough to pull out. I just reviewed the Skrr-S tank when I reviewed the Vapoeresso Gen, so it doesn’t make sense to review it again here. I would recommend that you go and check out the Vaporesso Gen review I did. (http://vapepassion.com/vaporesso-gen-skrr-s-tank-review/)

But just to give you my quick thoughts on it, it’s a fairly average sub-ohm tank, but it works well. It doesn’t really have any big flaws or anything, it’s just nothing special. Both coil heads that come with the tank work great, have a long life, and good flavor. I really like the Luxe S. I reviewed the Vaporesso Revenger a while back which I think came out a few months before the Luxe S and the Luxe S reminds me a lot of that one, but with a different design and upgraded. The Luxe S looks great, it fires fast, it has lots of features, and it just works well.