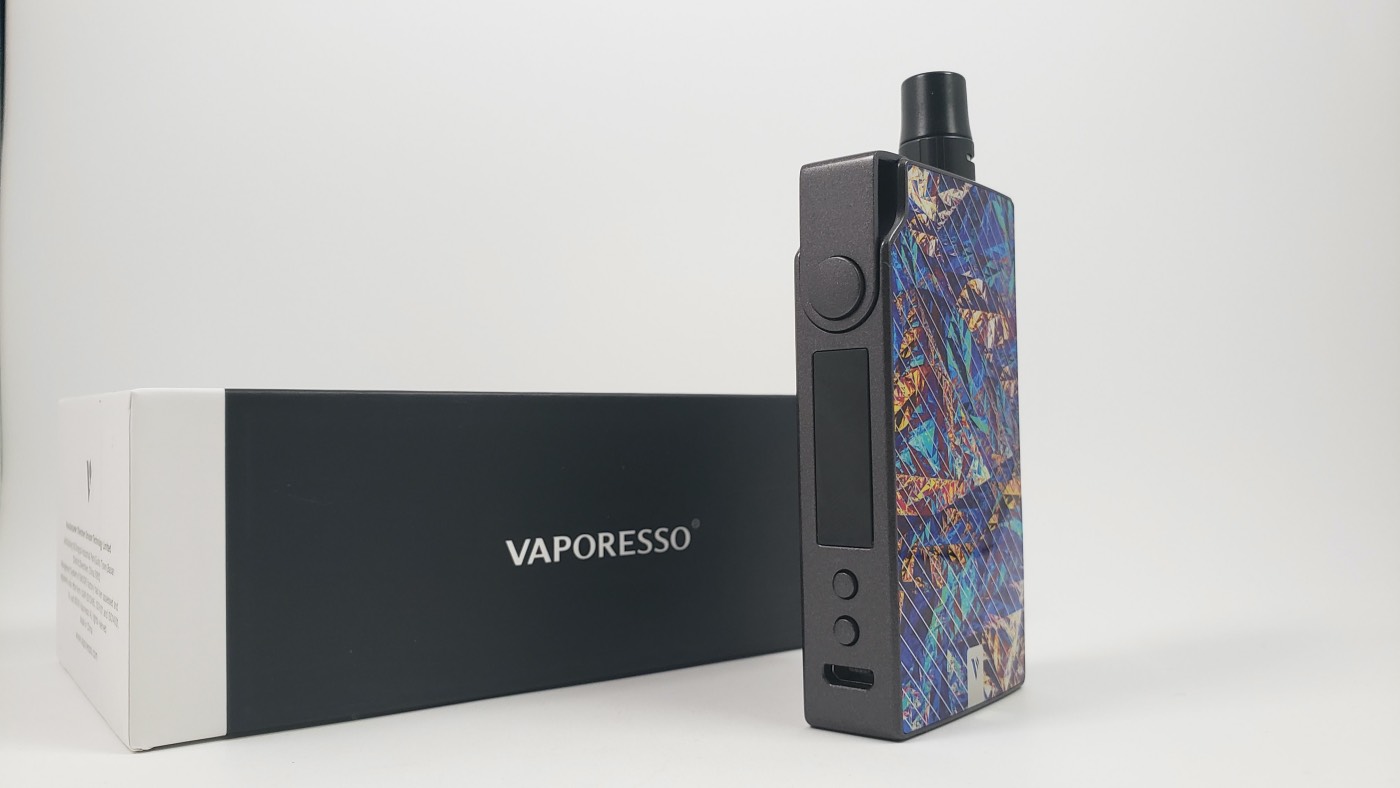 This was sent to me for review from Vaporesso. This is a beautiful looking pod device that comes with some nice features and can handle both MTL and Direct Lung vaping. The first thing I thought of when I saw this was that it’s similar to the Artery Pal, but that’s probably only because of the shape and the resin panel. The similarities pretty much end there. But wow, this is a great looking device.

There are several great colors to pick from; marble, lava, red, blue, silver carbon fiber, and grey carbon fiber. My personal favorite is the marble, but Vaporesso sent me the blue version. I still really like the design though.

On the front panel of the device is a firing button, a 0.69″ OLED screen, two adjustment buttons, and a micro USB port.

The OLED screen shows your battery level, ohms of your coil, how many puffs you’ve taken, and the wattage setting.

The device stands 90.5mm tall, it’s 41.5mm wide, and 16.345 mm thick. There’s also this opening built into the body so that you can use a lanyard on here if you want. Personally, I think it’s a little too heavy to hang from your neck, but hey, you have that option.

The AXON chip in the Degree has a dry hit prevention feature, which Vaporesso says is based on auto temperature controlled technology. From what I’ve experienced, the dry hit technology works really well.

If the pod is empty or getting dry, the device will stop firing during your hit and you’ll get a warning on the screen that says “Low E-Liquid”. The drip tip is not removable, but the cover comes off, so you can at least take that part off and clean it, which is nice because that’s the part that touches your lips all the time. The mouthpiece is comfortable to use and it works well. The Axon chip is super fast. Vaporesso uses a pulse mode to fire the device in pulses of every 0.02 seconds, so it fires quickly, but also continuously without dropping in power over the duration of the hit.

There are two types of coils that the Degree uses and the Degree will automatically set the device to what they believe is the best wattage and it also sets a cap on the wattage depending on the coil.

You can adjust the wattage to whatever you prefer as long as it’s not above the max wattage and I’ve actually found that the default settings work just fine. These pods pop in and out of the device easily using the battery ribbon, but even if you forget to use the ribbon, there’s a little lip on the pod that lets you get your fingernail in there to pull it right out. There are two types of coils built into the pods. 0.6 Ohm Meshed Pod – This pod is designed to be vaped at 16-22 watts. It works great at the max wattage and the flavor is very good. 1.3 Ohm CCELL Pod – This pod is designed to be vaped at 7-12.5 watts. This one also performs great. The flavor is very good and it works perfect at the max of 12.5 watts. These pods are also designed to be leak-resistant and that’s because it uses Vaporesso’s popular one-way valve port to fill the pod. And it’s awesome that Vaporesso left the fill port accessible from the top of the device so that you don’t have to take the pod out. I love that.

To fill the pod, you press the tip of a fine-tip e-liquid bottle into the valve so that it opens up, which you can see open inside the pod, and then you squeeze the liquid into it. The only drawback of this design is that you can’t easily change out the liquid if you want to use something else. You have to vape the pod empty unless you don’t mind mixing flavors together. What’s really nice about the Degree is that the airflow control is on the top of the device right under the mouthpiece, rather than being built into the bottom of the pod where the coil is installed, which is how most pod systems work these days. I love this. It’s so much more convenient than having the airflow on the pod.

The airflow works really well, although I would have liked for it to seal a little better. For example, if you want a really tight draw, you need to close the airflow slots completely. You can still get a draw this way and that’s how I prefer to vape high nicotine e-liquids. If you open the airflow wide open, it’s still a very restricted draw, but loose enough to get a lung hit. The battery inside the Degree is a built-in 950mAh battery, which is a nice size for a device of this size. I would expect it to get you through a full day without having to charge it, but of course, your results might vary depending on how much you vape.

To charge the battery, the Degree uses a micro USB cable and you can vape it while it’s charging. I really like the Degree. It looks awesome, it’s durable, the dry hit protection works great, it’s really easy to fill without taking the pod out, the airflow control is on the top of the device, and the flavor from the pods are excellent. I really don’t have anything to complain out. I like the whole thing. So that’s it! This was sent to me for review from Vaporess and you can get it from them for $47.90 from Vaporesso.com