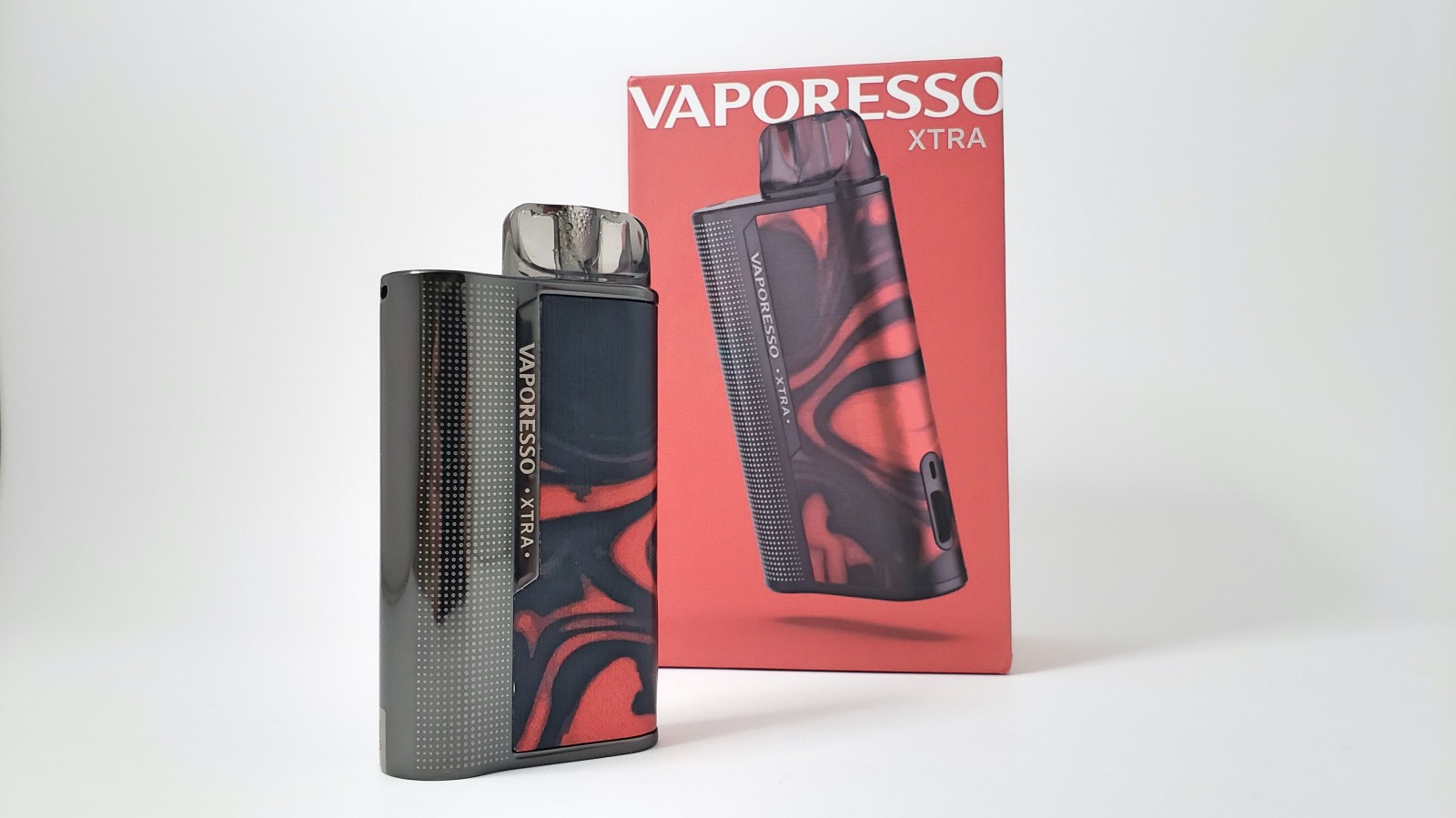 The Vaporesso XTRA was sent to me for review from Vaporesso. This is Vaporesso’s newest pod device designed to be small and ergonomic. It has a larger battery than other pod devices and they’ve also improved their mesh coils with better cotton. The XTRA comes in six different designs, three resin-styled and three other designs. I believe all of the designs are actually thick stickers. The model I received is the Grey Resin model, which has a dark grey metal body with a red and black resin design. It looks great.

The XTRA is very small, which is great for portability. It also has a curved design for a more ergonomic grip. Vaporesso says that the grip also has an anti-skid texture so that it doesn’t slip out of your hands, but it doesn’t seem to have more grip than anything else to me.

The XTRA does have a power button, but it’s draw-activated, so that button is only to turn it off and on. I like being able to turn the device off and on, so I really like that. Press the button five times fast to turn it on. The refillable pods hold 2 ml of e-liquid, so that’s what you’d expect from a pod device. You should be able to get about five refills from each pod before the flavor starts to reduce. At the top of the pod is a curved mouthpiece that is comfortable to use.

The coils are built into the pods, so you can’t remove or change them. If you need to change the coil, you need to replace the entire pod. I personally prefer replaceable coils because it’s cheaper and it’s less wasteful, but you don’t see that too often anyway, so it’s not a big deal. To fill the pods, just pull open the seal on the side of the pod and fill it up. It’s a decent-sized hole and works fine. These pods are made with the great coils that Vaporesso always uses in their products, but the mesh coils supposedly have an upgraded version of cotton, which they say results in better flavor.

There are two types of pods you can get with the XTRA:

The 1.2-ohm unipod is what you would use for vaping higher nicotine liquids. As always with Vaporesso’s coils, the flavor is excellent. The XTRA pushes 11 watts when you use this coil.

The 0.8-ohm pod is designed for bigger hits and more flavor than the 1.2-ohm coil. And yeah, the flavor is even better than 1.2-ohm pod because it uses mesh and better cotton. Most people would probably use this pod for lower levels of nicotine, but I actually use it for the same high nicotine strengths that I use in all of my pod devices, which is usually around 48mg. The XTRA pushes 16 watts when you use this coil.

When taking a hit, the airflow is designed for mouth to lung hits, but it’s loose. It’s not as tight as I like, because I like a really restricted draw, but I’ve gotten used to it. The 1.2-ohm pod has a tighter draw than the 0.8-ohm mesh pod. The battery inside the XTRA is a 900mAh battery, which is plenty for a pod device and is actually pretty impressive for a device as small as the XTRA. You should have no problems getting through a full day of vaping on this without needing a recharge. I don’t vape heavily, only once or twice per day, so this battery lasts me about a week.

To charge the XTRA, you use a micro USB cable. I would have like to see a USB-C charging port, but not a big deal.

To give you some sort of indication of the battery life, you have an LED light with three colors. Green means you have a high charge at least above 71%, blue is medium, and red means you’re low at 30% or less.

I like the XTRA a lot. It has a very satisfying vape, it looks great, the flavor from the pods is very good, it’s really tiny, and it’s easy to use. I really don’t have anything bad to say about it.

This was sent to me for review from Vaporesso and you can get it from them for about $30.