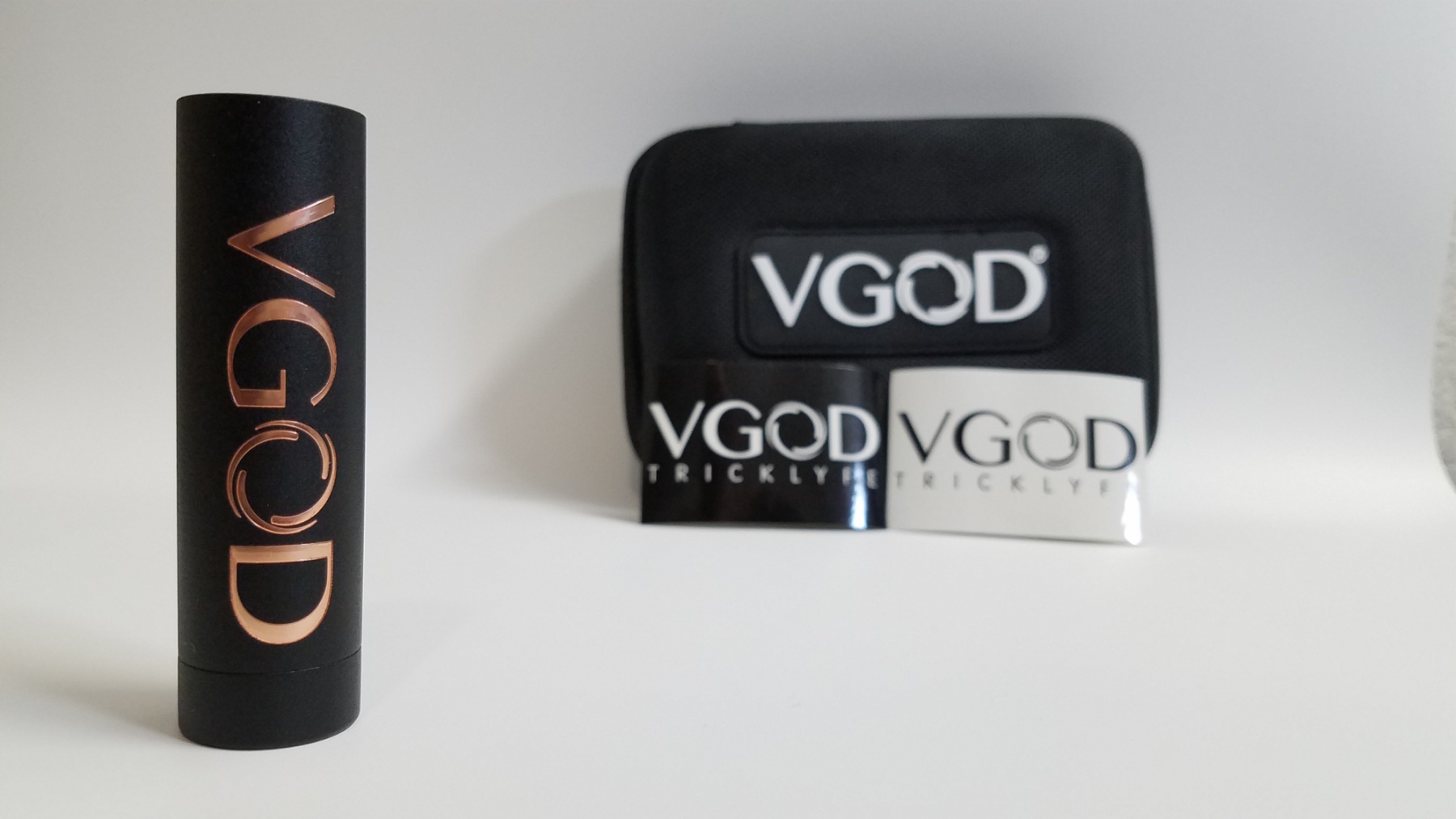 I was sent the VGOD Pro Mech Mod for the purpose of this review from Ave40.com. This is considered a higher-end mech mod and they sell it for $79.00. The VGOD Pro is considered a higher-end device and it comes with fancier packaging than most products. You get a hard zip-up carrying case to protect the mod. Inside the case is a lot of cushioning. And what’s really cool is that there’s a pocket to hold more vape stuff.

And if you want to repurpose the case, you can take the padding out and you’ll find this stretchy nylon organizer. These things are usually used for small electronics like USB drives and cables, but I actually use one of these to carry around devices and e-juice in my backpack and it’s awesome. So you have that option if you want to use.

As far as the design of the mod itself goes, this thing is beautiful. It just looks super-clean. I love the looks of it. It feels really solid and high-quality in the hand too. With many mech mods, you can unscrew the top where the atomizer connects. On the VGOD Pro Mech, it’s one solid piece. There’s no adjustments you can make here. As you can see it’s just a threaded hole that leads right to the battery.

This is a hybrid mech mod, which means the atomizer connects directly to the battery. If you’re not familiar with hybrids, this also means that you absolutely, ABSOLUTELY need to understand hybrid safety, atomizer pin safety, and battery safety.

You can’t just connect anything to a hybrid mod. You need an atomizer with a long 510 pin so that the battery doesn’t touch the outer wall of the 510 on the atomizer otherwise that will cause a hard short on your battery, which would be very dangerous. That pin also needs to be static. It can’t be spring loaded or a floating pin.

Basically, be very certain of your build before running it on a mech.

The button has the smoothest threads I think I’ve ever felt on any device. It’s so smooth! I like taking the button off and on just to feel how smooth and precisely machined it is. It’s that good.

At the top of the button, there’s a black spring-loaded battery contact. This makes sure that no matter the size of 18650 battery you’re using, it’s pushed all the way up to make a connection with the atomizer. That’s why you don’t need an adjustable top on this mod.

The button contact is also made of copper and the button itself has aerospace grade carbon fiber coating. That’s probably just a sticker or something, but sounds nice doesn’t it?

When taking apart the button, make sure you hold the button while unscrewing the contact because you don’t want the spring to fly out. After taking the button apart, you can see the insides of the button. It’s all copper and looks really solid. This is where you’ll find that gold plated spring if you ever need to replace it. That spring looks really nice too. It has a unique design that makes it much stronger and more durable than typical spiral springs.

When you put it back together, make sure the contact is screwed in tight. You don’t want a bad connection when you’re firing this. You should always do regular checks on that contact to make sure it’s tight because buttons on mechs get loose all the time.

So back to the tube. If you look inside you’ll see that those threads are copper. This whole tube is solid copper, which is great for conductivity. A lot of people hate copper because it changes color from the oils on your hands and it smells like pennies, but this is treated with a matte black coating so you won’t get any of those problems. It also looks like the inside has a plastic casing, which is a great safety feature in case you have torn battery wrap. I can’t be sure what that is though because I can’t find any specs on what it is, but that’s what it looks like to me.

And then you have vent holes in case you do short the battery and it vents and the gasses need to escape. But if the battery goes into thermal runaway, those holes won’t help.

How Does The VGOD Mech Pro Perform?

Ok now let’s talk performance. So I used a 0.24 ohm dual coil build (2.5mm diameter, 24 gauge kanthal, 6 wraps). The battery charged to 4.08, which would give me about 69 watts according to an Ohms law calculator. Of course that’s optimal conditions. Mechs don’t actually work that way. So with the voltage drop in mechs and also accounting for battery sag, maybe we could expect, say 55 or 60 watts.

I don’t have anything to test exactly what I’m getting, but I compared it to 50 watts on my regulated devices and that seems pretty much about what I’m getting. I also used the exact same battery and RDA on the Athena Mod, which a lot of people say has a very minimal voltage drop, and it performs identically. So I don’t know if that tells you anything, but that’s what I got. It performs as well as, or better than, the Athena.

If you vape at 80 watts and you want to get 80 watts out of this, you’ll need to build pretty low, like 0.18. That draws 23 amps from the battery, so that’s where you’re getting into dangerous territory for a mech mod, in my opinion (I know some battery and mech experts will disagree with me, but that’s too risky for me). So if you do go that low, just make sure you have a legit high-amp battery like an LG HB4, which is rated by Mooch to be a 30amp battery. I never go that low on a mech, so I can’t tell you.

With single battery mech mods, it’s usually suggested that you should build your coils as if the battery has a 3.7v charge, which will get you closer to your actual current. And Mooch has confirmed that in one of the Vaping Biker’s videos. I’d say that seems pretty accurate for the VGOD Pro Mech. So go use an ohms law calculator to figure out what you need to build to get the wattage you want. So that’s the VGOD Pro Mech! It’s an absolute beauty of a mod. It feels durable, it’s made of copper, the machining is precise, and it seems to hit hard without a lot of voltage drop.

If you’re in the market for a high-end single-battery hybrid mod that looks amazing, check this one out.

I use mech mods here and there, but I’m not a mech mod expert, so if I got anything wrong or if you have anything to add, please do in the comments.

Like I said earlier, I got this from Ave40.com for the purpose of review and they sell it for $75.