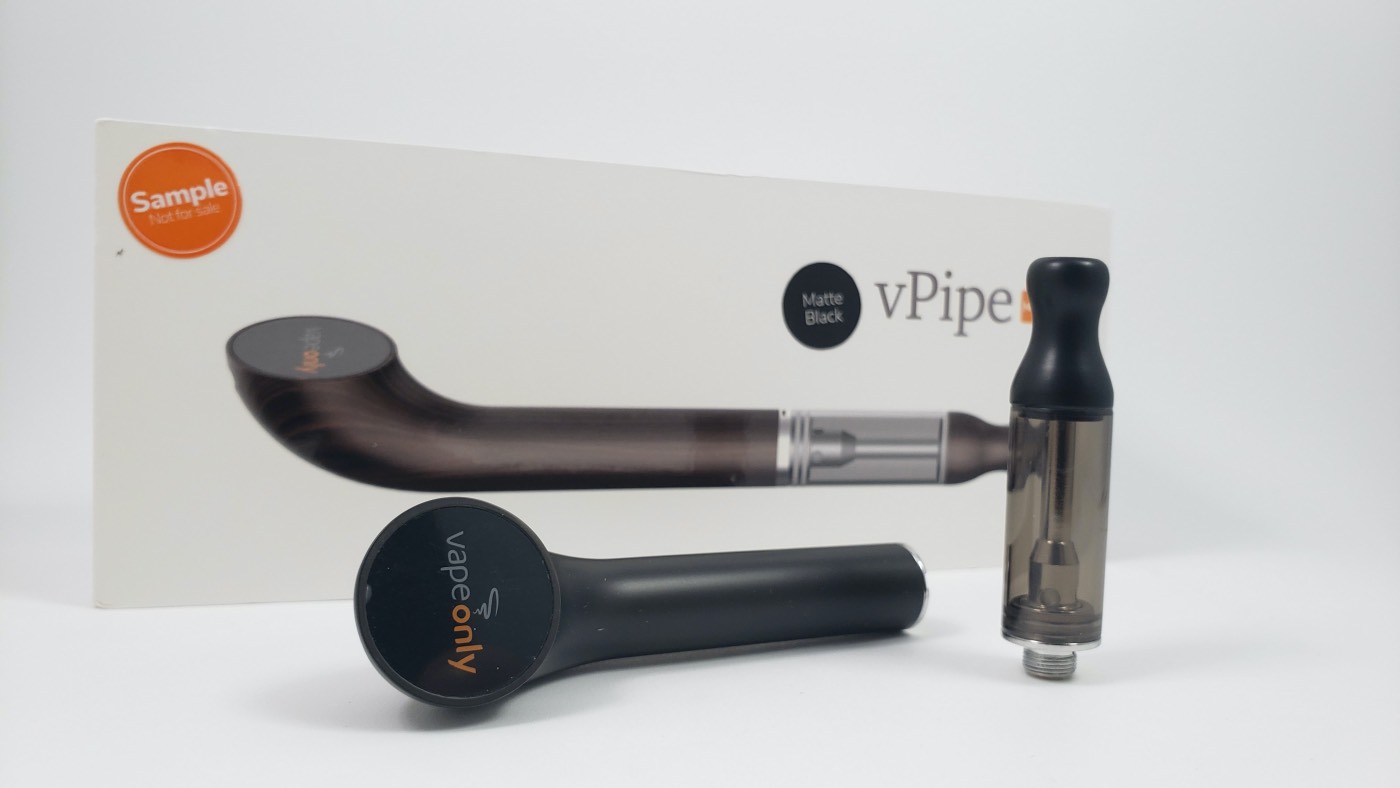 The Vpipe Mini was sent to me for review from HeavenGifts.com (check it out here). This is a little beginner device – sort of like a vape pen but shaped like a modern artsy pipe The design is very different, I gotta give it that. It’s basically a standard vape pen, but with a big curved end that makes it look like a pipe.

To me, it seems a little funny to vape something that looks like a pipe when it isn’t actually a pipe because the purpose of a pipe is to hold tobacco in a bowl. There’s no reason to have a pipe-shaped vape if it’s not holding anything in the bowl, right? But the benefit of this “bowl” is that you have a screen visible to your line of sight that provides a visual cue that you’re vaping.

And after using the VPipe Mini, I have to admit that there’s some psychological pleasure of imagining a pipe in your hand. It actually makes me want to enjoy a nice tobacco-vape with a scotch or a whiskey. So I’ve been enjoying using this for that reason. I’ve been vaping some of Black Note’s Cigar blend, which is an excellent naturally extracted tobacco flavor and it’s been great.

The device fully assembled is 129mm long, which is about 5 inches. The main body of the Vpipe Mini is 12.5mm in diameter and the bottom to the top of the bowl is 21.2mm. It’s a small compact setup.

It comes in four different colors; brushed brass, wood grain, matte black, and glossy black. I think all of the colors are pretty nice.

This is a draw-activated device, so there’s no button. Take a drag and it turns it on.

The Vpipe Mini has a max wattage of 11 watts, so it’s clearly designed for high nicotine e-liquids. Of course you can use whatever nicotine you want, even zero, but for people who like high-nicotine, strong throat hit, etc. this will be right up there alley.

There aren’t any modes to pick from on the Vpipe, so the only thing you’ll see on the bowl is the LED light light up when you take a hit. I think they should have put the screen to better use, such as by including wattage options or at least a puff counter and duration timer. The battery inside of the Vpipe Mini is a 360mAh internal battery. It’s a small battery, but plenty for a device of this size and max wattage.

It charges using a micro USB cable, which plugs into the bowl-end of the device. and the charging time for a fully drained battery is about 45 minutes. You can vape while it’s charging as well. The Vpipe Tank is a fully assembled disposable tank with the coil built-in. You can’t replace the coil, so once the coil goes bad, you need to replace the full tank, but don’t throw away the mouthpiece. A new mouthpiece doesn’t come with replacement tanks, so you need to keep it. The nice thing about these tanks is that they’re not expensive. You can get a three-pack of tanks for $6.80. The Vpipe Mini will only work with the included tank. I guess it’s not typical 510/Ego threading so that prevents the device from working with other tanks. I’ve tried using other atomizers on here, even tanks built at 1.0 ohm or higher and of various types of wires, and I just can’t get anything to work. So if you get this device, you have to use the included tank.

The tank will work with other devices though, but you probably won’t want to because of how the airflow comes in from the sides of the bottom of the tank. It won’t get good airflow intake on most newer devices since most devices no longer have airflow intake on the 510 connectors. You could loosen the tank to use on other devices but it’ll be loose and wobbly. But yeah, I don’t think you’ll want to use this on anything else anyway. VapeOnly says this is a PCTG tube tank. I’m not familiar with PCTG, but it’s basically a type of plastic that’s similar to PET plastic. It has high impact resistance and clarity, so that seems like a good thing. The tank has a capacity of 1.5ml and uses a 1.0-ohm coil. The flavor is pretty good and the coils seem to perform well. I do get a little spit back from these coils though. Not a lot of spit back, but I do seem to get a little bit of liquid in my mouth on a lot of hits.

The airflow comes in from the bottom of the tank through two little holes between the tank and the device. So if you’re vaping and the tank seems clogged, make sure your finger isn’t covering these holes.

The airflow isn’t adjustable, so you’re stuck with the only option available; a restricted mouth to lung draw. The draw is pretty tight and seems perfect to me. I really like how the Vpipe Mini performs and even how it looks. The flavor is pretty good, the vapor production is much better than a typical vape pen style device, and I never have issues with it firing. Overall, I’ve had a good experience with it.

This was sent to me for review from HeavenGifts.com and you can pick it up from them for about $25.