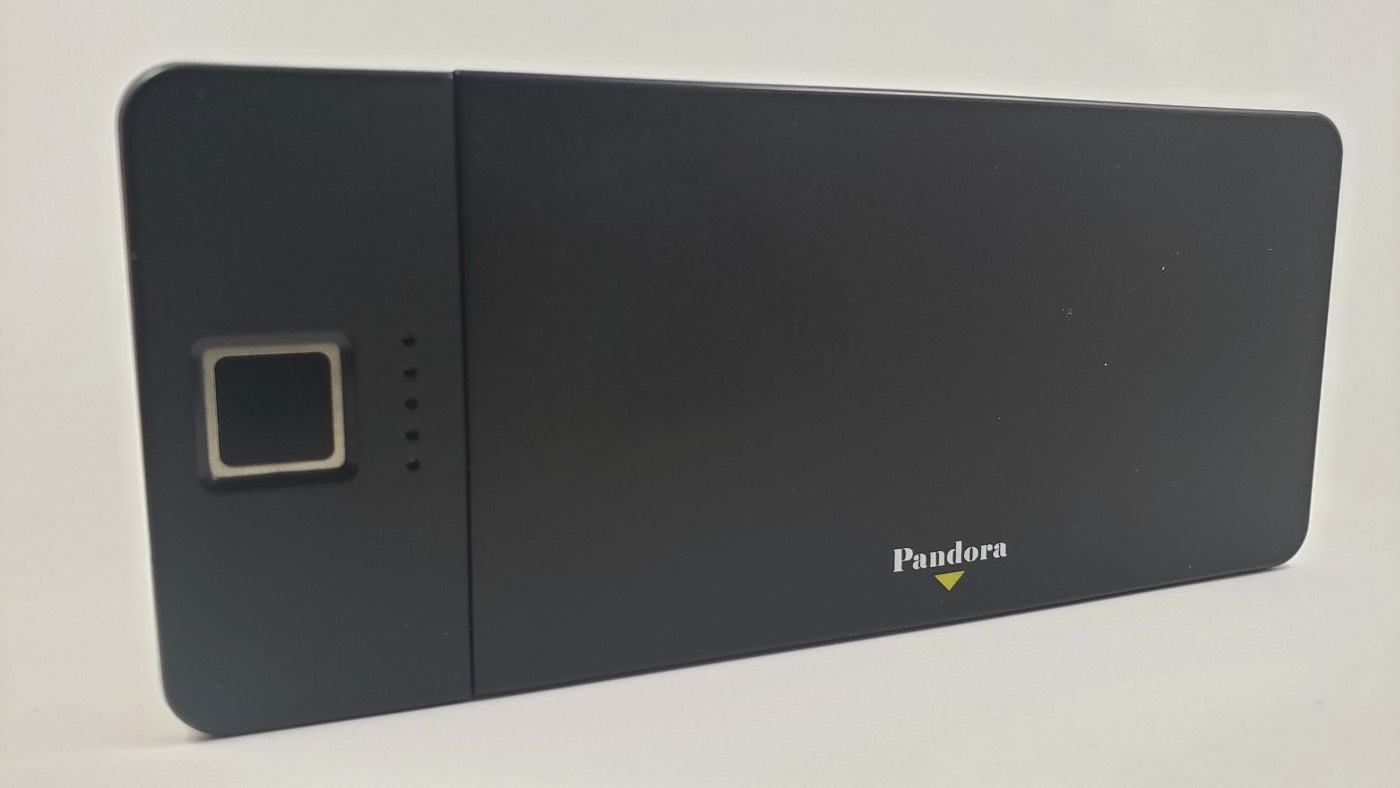 The Wellon Pandora was sent to me for review from Wellon. This is a new portable, fingerprint locked, Juul charger. The Pandora charger is pretty unassuming. It just looks like a small black box. As far as looks go, there’s not a lot going on. Nothing wrong with that though. That might actually be a good thing for a lockable case for the Juul.

The size is nice too. It’s a little bigger than the thickness of a phone, but it fits in my pocket comfortably. With all of the drama around the Juul and minors getting their hands on it, it was only a matter of time before a lockable device like this came out. As soon as you close the door on the Pandora it locks. And the only way to unlock it is with a fingerprint.

This isn’t designed to lock up your Juul like Fort Knox. You could easily break this into pieces if you wanted to get the Juul out. But that’s not the point. This lock prevents people from opening it. For example, a little kid isn’t going to break this open before you notice. And if you have an older teenaged kid and they break it open, you’re gonna know they did and you’re gonna catch them. Teenagers don’t want to get caught vaping, so they’re not going to break it open. And there aren’t any screws or anything on here that would make it easy to take apart and reassemble. So think the lock is a good idea. When you first get the Pandora charger, it doesn’t have any fingerprints saved to it, so any of your fingers will work to unlock it. Once you have the admin finger set, you can add other fingers either from yourself or from other users. You can add up to 40 different fingerprints to the Pandora, so you could open this with your toes if you wanted.

But actually it’s a nice feature if you share your device with your significant other or with friends!

To add a finger, hold your admin finger on the reader for 3 seconds until the five lights blink again. And then touch the reader with a different finger, again five different times. And that’s it. It’s really easy to add fingerprints.

And if you ever need to wipe the device, you will need to use your admin finger again. You would hold it on the reader for 6 seconds, you’ll get a long beep, and all of the fingerprints saved in the memory will be wiped.

To unlock the Pandora, just hold a programmed finger on there for about a second. All lights will light up, it’ll beep, and the door will pop open.

The fingerprint lock doesn’t work perfectly every time and Wellon does mention that in the specs. They say the misidentification rate is less 0.01%. It never opens with a non-programmed finger, but there will be times where it doesn’t detect your fingerprint. I think that 0.01% rate is accurate for the most part, but if the sensor is dirty or if your finger is dirty, you’ll have more problems getting it to recognize your fingerprint.

Is Your Fingerprint Secure?

One of the concerns that Wellon thought people might have this is that it’s reading your fingerprint. They’ve eased those concerns by pointing out that the reader is all contained. The Pandora doesn’t connect to your phone, Wifi, BlueTooth, or any outside device.

The Storage Space and Charging the Juul The Pandora can hold a Juul with a pod attached and three additional pods, so there’s a lot of space in here. I really like how much storage space this has. The Juul pods sit loosely, so if you tilt it with the door open, those pods will fall out. I would have liked for them to be more secure. The Juul seats into the charger nice and tight. It won’t fall out. You’ll want to remember to use the battery ribbon so that you can easily pull the Juul out when you need it.

The Pandora charges a Juul really fast. A fully drained Juul will take about 45 minutes to charge. But if you’re putting your Juul in here every time you use it, the Juul will stay charged all the time. It might take 5-10 minutes to bring it back to a full battery. You can tell how much charge the Pandora has by the five blue lights near the fingerprint reader. Each light indicates 20% of charge.

The battery in the Pandora is a big 1100mAh battery, so you can charge a Juul several times before needing to charge the Pandora. To charge the Wellon, plug in the included micro USB cable. Wellon says it can fully charge a Juul three times, but I think it might be even more. I’ve also found that the battery is really efficient. With other Juul chargers, I’ve found that the batteries tend to drain slowly even while not charging, but the Pandora doesn’t seem to lose much charge at all.

Portable Juul chargers have become extremely popular lately and I’ve already reviewed several different brands. This one is my favorite so far, at least in terms of performance. I don’t need the lock but I can see how it would be really useful for someone with kids who might get into it. But what I really like is that it stores three pods and a fully assembled Juul, it has a ton of battery life, and it charges really fast. If you have a Juul, and need a charger, this one works really, really well.

OK, that’s it. I got this for review from Wellon (check it out on their site) and you can pick it up for around $32 to $35 from various online stores.