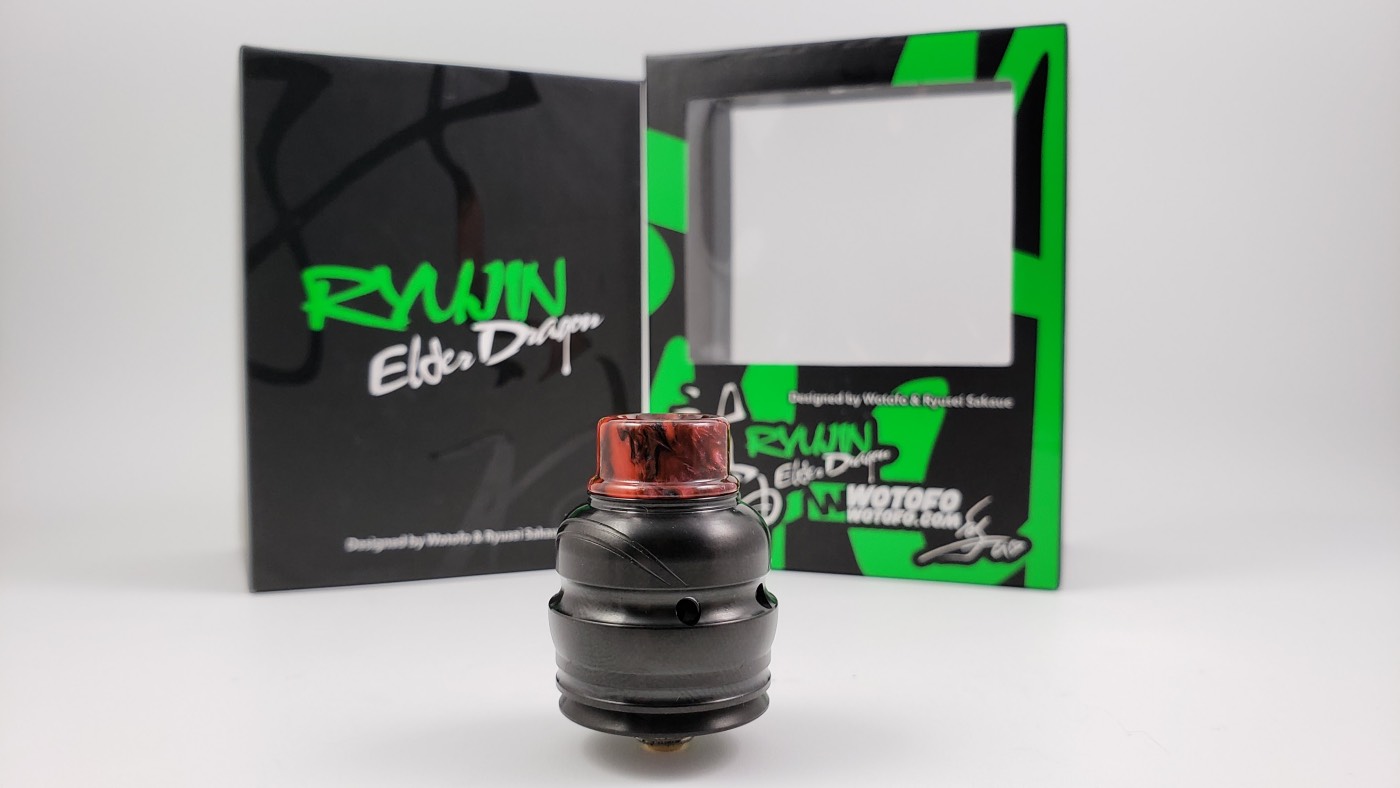 The design of the Elder Dragon is definitely unique. It has this short and sort of bulbous look to it. And the layered design is supposed to resemble a Japanese pagoda, which if you don’t know, is a sacred building of worship. And then on the bottom of the base, you have this Tai Chi, or Yin Yang symbol, which represents balance.

It’s really cool how much cultural meaning has been built into the design of this RDA.

As for the size, it’s pretty short and small. The pre-installed drip tip is a beautiful 810 resin drip tip. You’ll also get a spare white 810 drip tip which works just fine. And you get a 510 drip tip adapter if you want to use a smaller drip tip, which is a really good idea since the Elder Dragon is a single coil RDA. So it’s good for lower wattage vaping too, and I think a lot of lower wattage vapers like using slimmer 510 mouthpieces. The barrel has four airflow holes, two on each side and all the same diameter. To adjust the airflow, you can turn it left and right, but you can’t turn it indefinitely. There’s a stopping point on each side. I can’t think of a reason why this is better or worse than being able to spin it around freely, but I like it.

With the airflow wide open, you’ll get just a slightly restricted lung hit. If you shut it down almost all the way, you get a nice tight draw. But I don’t think this works well as a tight draw device. Even though it’s a single coil RDA and works well at lower wattages, it’s still designed for big hits.

The airflow intake holes are designed to pull in air at a slight angle. It forces that air down under the coil, then up and around the coil, and up the chimney.

That’s something to keep in mind when installing coils. If the coil is too low, it can impact how the airflow works because it will hit the sides of the coil instead of getting underneath it. If you look at Wotofo’s site, you’ll see how high the coil should sit. Basically, you’ll want the bottom of the coil to just barely sit in contact with the top of the airflow intake holes.

Another really unique feature of this airflow is that the intakes are detachable. To take those out, there are screws on the bottom of the base near the 510 pin. They’re big screws and easy to turn. Being able to take these intake pieces out makes it really easy for you to really get into the RDA to clean everything out. I use an ultrasonic cleaner, so I don’t need to worry about washing in those tight spaces, but I think this is a really cool feature for people who want just a little more control over their products. This is a postless deck with four slots to screw down your coil. You can only put a single coil in here, but by having four slots, you’re able to easily install a coil no matter which direction the coil legs are pointing, so that’s a nice feature.

To install a coil, simply unscrew the coil screws, drop a coil into the holes and tighten it down. You’ll notice that on the sides of the deck, there are two half circle cutouts. This makes it really easy to get your coil positioned in the right place. And Wotofo recommends cutting the coil legs at 6mm, so that helps to make sure you get a good height on here.

The post holes are nice and wide, so you can fit some decent sized coils in there. The coil included in the package is a 3mm inner diameter coil, and I would say that’s about the size you want to stick to, otherwise, go smaller.

And if you really like those coils and want to recreate them, these are tri-core fused Clapton’s made with three 26g N80 cores and wrapped with 38g N80 wire. They come out to 0.17 ohms, which Wotofo says run best between 40-75 watts.

The deck is pretty deep, so you’ll need to cut your wicks a little long. I’ve found that cutting the wick somewhere around the length of where it reaches the outer o-ring is just about perfect.

The flavor is really good and I think that’s probably the result of this RDA being so small and compact. The airflow is nice and comfortable, and the deck is also really easy to build. The biggest drawback for me is that it can leak out of the airflow holes somewhat easily. But all in all, this is a really nice single coil RDA that I’ve been enjoying. You can get it here (affiliate).