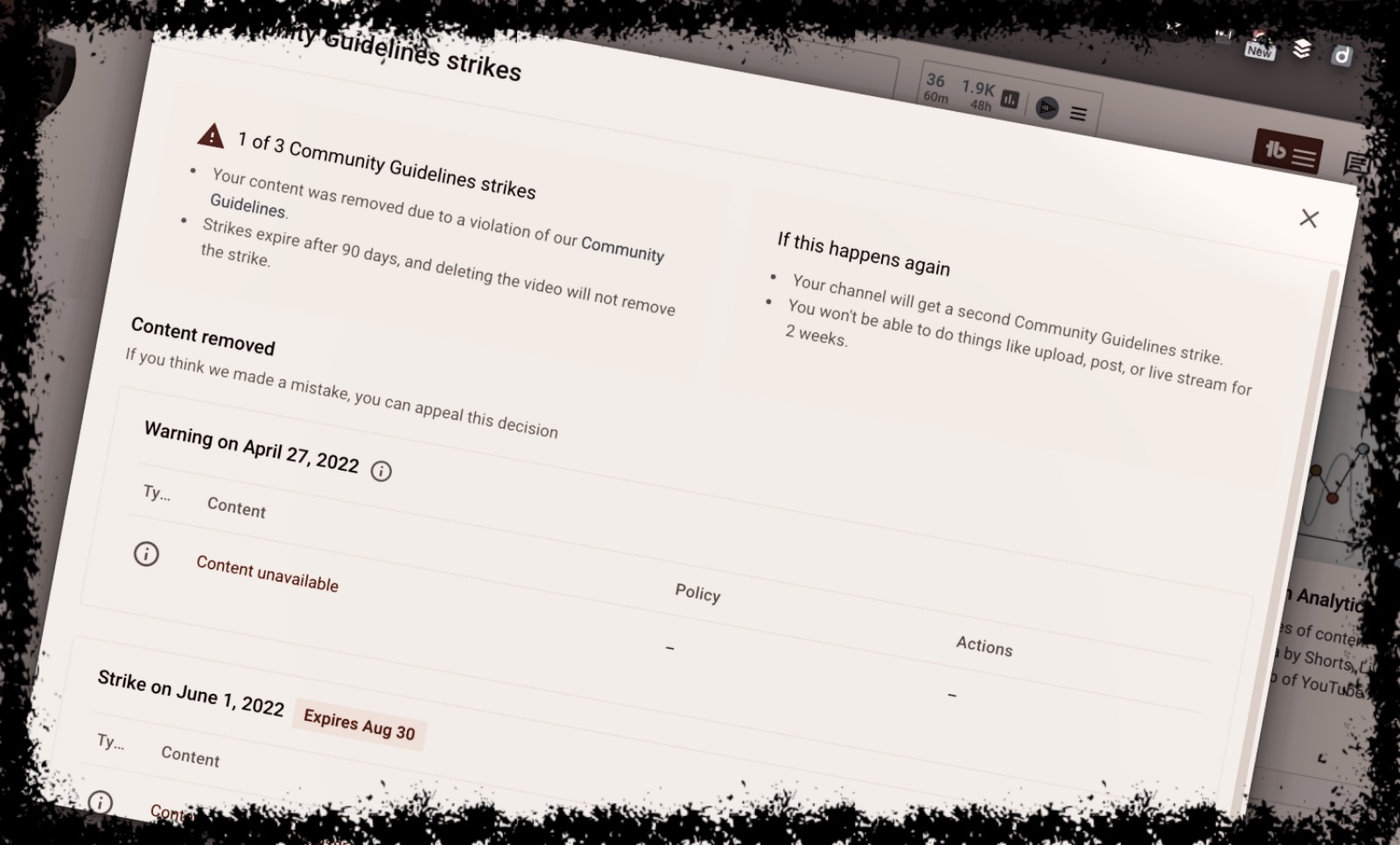 Over the last couple of months, YouTube has been going after vape creators for violating YouTube’s guidelines regarding “regulated goods,” or tobacco products. YouTube is either giving warnings or strikes for any videos that mention or even show a URL where you can buy a vape product.

For years now, it has been against YouTube’s guidelines to add links to online vape stores in the video description, but these rules against showing a URL in the video are new – or at least this is the first time that YouTube has enforced them.

Not only are YouTube bots looking for mentions of websites, likely through their automated transcription feature, but they’re also giving vape reviewers strikes for showing websites on product packaging and user manuals and even QR codes that lead to manufacturer websites.

When YouTube took action against reviewers for links in product descriptions, many of us had to update hundreds and even thousands of videos. But these new changes aren’t as easy to fix. You could edit the video using YouTube’s editor, but their editing program is terribly slow, inaccurate, and difficult to use. For long-running channels with hundreds of videos, with creators who do this for fun and who don’t have assistants working for them, this is a nearly impossible task.

Reviewers Who Have Gotten Strikes

Jai Haze received a strike “the sale of prohibited items.” He never mentioned any website at all in the video so he was confused about what was going on. After some back and forth with YouTube, he finally got a specific timestamp of the problem, which was a QR code on the box.

So that’s cool… @TeamYouTube I’m guessing that that broke policy too?? I’d love to know the timestamp of where the policy is broken. It seems like the algorithm is broken on your bots #targeted pic.twitter.com/HYtu70nW1P

Matt from Suck My Mod got a strike for showing a URL on a box. His appeal was rejected but he contacted the Team YouTube account on Twitter and reinstated his video.

I’m at home sick with Covid and figured since @TeamYouTube is coming after my channel again it’s a good time to do a 🧵 on my 8 years of experience as a YouTuber. Sorta long, but hopefully some find it interesting…

GrimmGreen got a strike on April 17th for breaking the “regulated goods” rule for a video he published 10 years ago, BEFORE these rules were in place. He appealed it and they rejected it. So YouTube is even giving strikes retroactively.

What a way to wake up! getting a community guidelines strike on a VIDEO FROM 10 YEARS AGO . A 🧵

I don’t understand why I keep getting strikes for following the rules @TeamYouTube can you please help me out.
Here is my YouTube channel https://t.co/77thMqnZcm
And here is the video https://t.co/FOBPDFl0HD
I’ve already appealed and got rejected 15 seconds later by the bot. pic.twitter.com/9rcywaa6kv

Zophie Reviews got a strike on May 7th but her appeal was approved the next day.

Woke up to good news, appeal won! No clue what happened. Video was age-restricted by me prior to posting, there were no links to vape products and I did not tell people where to buy the vape.

Those are the big reviewers but there are lots of others.

I’ve even received several warnings and a strike for mentioning the site that sent me a product for review. It starts with a warning (sometimes, if you’re lucky), but the second infraction becomes a strike. And if you get three strikes, the channel is shut down permanently.

Unfortunately, I’ve had to delete quite a few videos in hopes that I can protect my channel, but I worry I might just have to delete everything and start re-uploading just my most recent reviews.

What Should Vape Reviewers Do If They Get a Strike?

First, it’s important to understand just how big YouTube is. If you’re not on YouTube, it’s going to be hard to reach any new viewers. Here’s what sort of traffic YouTube gets in a month.

Daily Motion gets a lot of traffic but very low views on vape videos. They focus more on highlighting big news stories on their home page rather than smaller niche creators. Their policy guidelines don’t restrict videos relating to vaping or tobacco so it appears to be a safe place to upload vape videos.

Vimeo gets decent traffic and they also don’t have any restrictions related to vaping content (or tobacco content in general), at least not according to their guidelines at the time of publishing this article. But like DailyMotion, you’ll have a hard time getting anyone to watch your vape videos because they focus on selling their professional video services on their home page. And if you do happen to find your way to their watch section, you’ll see that they highlight videos from movie makers and indie creators, not small niche channels like vaping.

One of the biggest drawbacks with Vimeo is that it isn’t free. They do have a free account but you’re limited to 500MB per week and a total account storage of 5GB. So basically, if you want to create more than a few videos, you need to at least pay for their lowest-priced Plus plan at $7 per month which lets you upload 5GB per week and 250GB per year.

A lot of vape reviewers and their viewers are recommending Rumble as an alternative to YouTube because Rumble has very lax content guidelines and will probably never prohibit vape videos. Rumble has a format that’s a lot more like YouTube too. But these videos still get very few views, especially for vape videos. For example, Vaping With Vic’s most viewed video has 130 views and Mike Vape’s most viewed video has 90. That’s a big drop compared to their normal 10k-15k views on each video.

Odysee is up and coming, like Rumble, but appears to be growing faster than Rumble. Vape videos here also seem to get more views. This seems like a promising platform.

Odysee isn’t a free-for-all and they have community guidelines but most people will probably agree with their rules. Some of those rules could be interpreted differently and it’s clear that they aren’t a platform that will allow you to post anything but they seem to allow much more types of content than YouTube.

D.Tube has been around for a few years but hasn’t really grown much recently. They are a decentralized platform self-governed by 10 elected leaders. D.Tube also does not censor content and relies on users to self-censor with upvotes and downvotes.

Which Video Platform Should You Choose?

In my opinion, you should be prepared to have your YouTube channel shut down. Maybe it won’t happen and maybe YouTube will change its stance on these guidelines. But I’m not waiting to see what happens without also trying to grow my followings somewhere else.

I recommend creating accounts on all of these platforms, even the free version of Vimeo, just to have it there. Then, I would recommend uploading your videos to all of these platforms every time you create a new video. If that’s too much work than what you’re willing to put in, here’s how I would prioritize each platform based on traffic and how vape videos are performing.