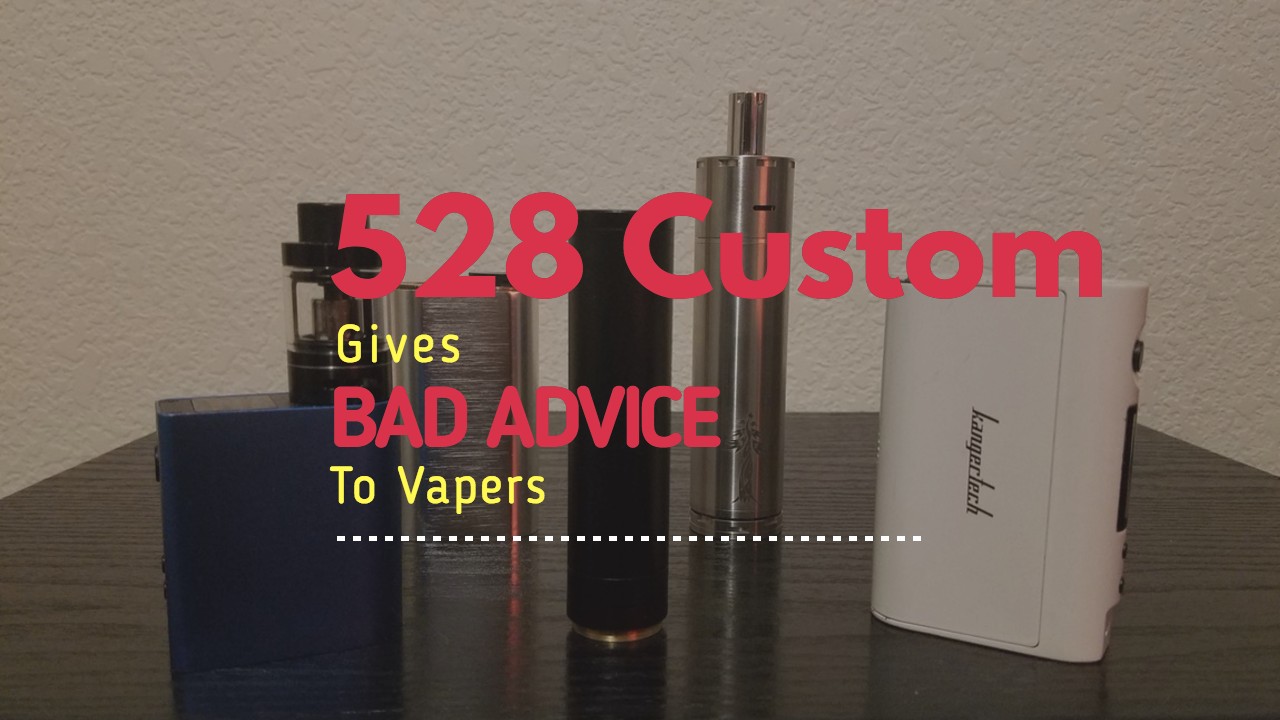 According to a post on VapingUnderground.com, someone sent an email to customer support at 528 Customs asking them for some advice on the Goon 1.5 RDA they just bought the day before. This person mentioned to 528 that they had just purchased the Goon and even after installing several builds, the ohms constantly jump around. He confirmed to 528 that the posts screws are tight and the coils don’t wiggle around at all. The RDA was also tightened all the way down on the device and it was tested on multiple devices. So basically, so there should be no reason for the ohms to move around once they’ve been fired.

Brittani Starkey of 528 Customs responded with this… She said “Have you tried it on a mech mod?”

She then followed up an hour later saying that her husband is the owner of 528 and the designer of the Goon. She said that the advice she gave was his suggestion and she said that it’s impossible for ohms to jump around on a mech mod. She said using it on a mech first will usually fix the issue. I don’t even know what to say about this. I guess it goes to show that even vape product manufacturers have no clue about vaping sometimes.

First, to say that firing an atomizer on a mech mod will produce different results than a regulated mod makes no sense at all. Either device will fire the coils. The only difference is that on a mech you’re limited by the batteries. There’s nothing physically different from how the atomizer receives power from the battery.

Then to say that it’s impossible for ohms to jump around on a mech mod is totally clueless. It’s impossible to know that ohms are jumping around because mech mods don’t have screens that show you the resistance changing, but that doesn’t mean it’s not happening. That’s equivalent to putting black tape over your check engine light in your car.

And to top it all off, someone posted the same issue on 528’s Instagram page. They were having issues with ohms jumping around. The owner responded condescendingly to this person saying that he already gave this person advice over email. The owner thought it was the person from earlier but it wasn’t. He goes on to say that he’s been vaping for more than 4 years and that using an atomizer on a mech mod tends to fix voltage issues. He also states that the Goon 1.5 is the one of the safest RDAs on the market due to the materials and insulators they use.

I honestly can’t believe this is the advice the owner of an RDA manufacturing company gave to a customer. And he throws out the fact that he’s been vaping for more than 4 years, implying that he knows what he’s talking about.

I’m not trying to crap on the Goon, because it’s an amazing RDA, although I’ve seen lots of bad reviews of the new 1.5 version. But I wanted to cover this story just because this advice is not only terrible, but also dangerous.

If the Goon 1.5 has some sort of shorting issue that’s causing the ohms to jump around, that could be extremely dangerous, especially on a mech mod. If the ohms jumped to below safe levels of the battery in a mech, that could hard short the battery and cause an explosion.

Seriously terrible advice. This might be an isolated issue, and not typical with the Goon 1.5 in general, but the advice they gave is so dangerous that I just had to talk about it.

528 Customs has since removed the Instagram thread and supposedly blocked everyone who commented on it, but the screenshots are on the Internet forever. And people are still commenting on other recent Instagram posts.