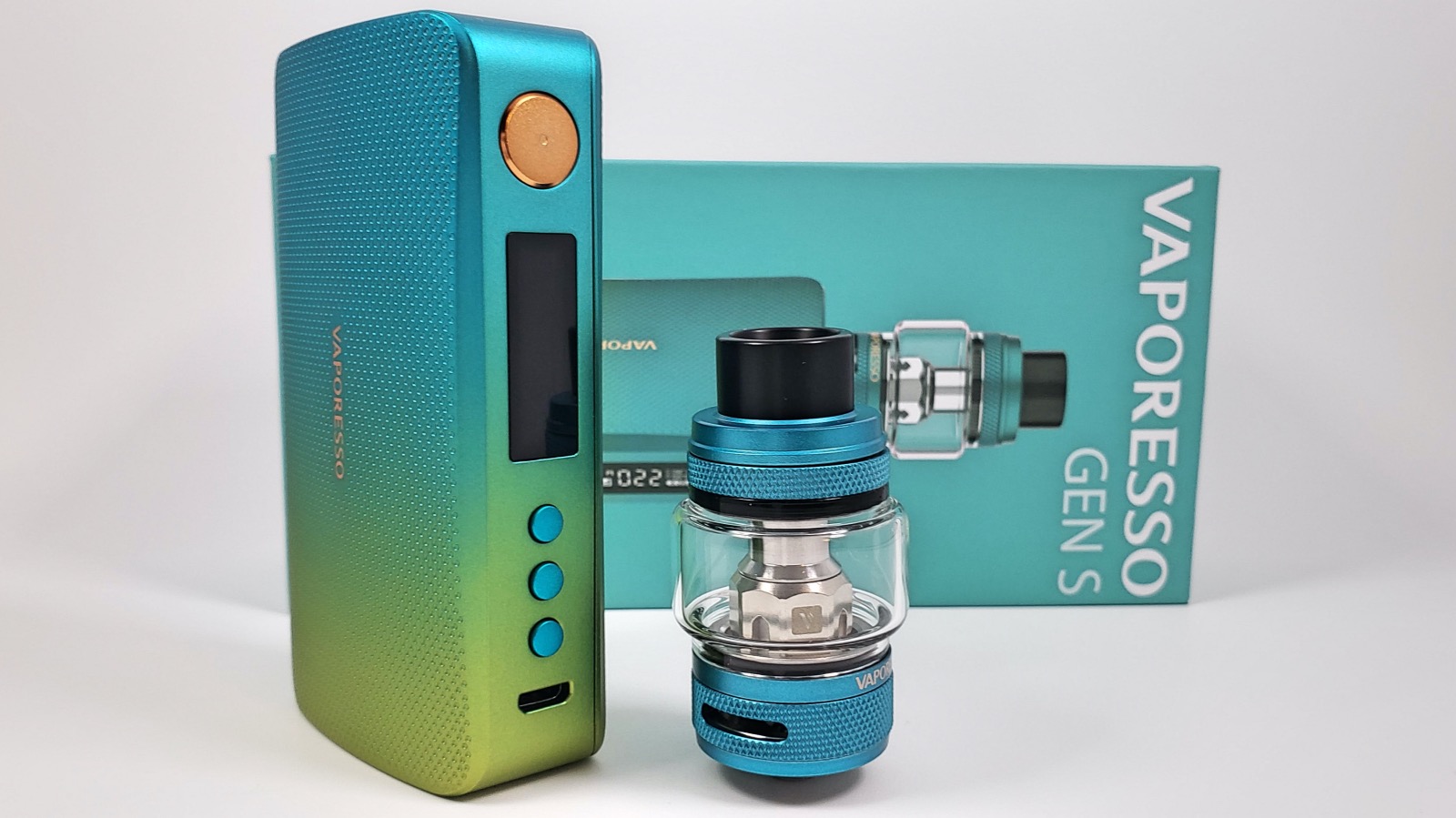 The Vaporesso Gen S was sent to me for review from Vaporesso (check it out here). This is the upgraded version of the very popular Gen that came out last year. I reviewed that one too and it was one of my favorite 18650 devices. You’re probably wondering what’s new and different between the Gen S and the original, and as far as I can tell, the only difference is that it comes in a few different colors and it comes with a different tank. That’s it. So if you already have the original Gen, there’s not a lot of reason to get this one.

Just like the original, the Gen S has this nice coating on it. That coating gives it a soft feel and it just feels good in the hand. There are several layers of coating that give it fire resistance, water resistance, and prevents fingerprints.

On the screen side, you have a firing button, a 0.91” OLED screen, an up button, Mode button, down button, and a micro-USB port. The Gen S still uses the same Axon chip from the original, which is a good thing. It’s a really fast chip that has lots of features.

In the menu you have several options:

Pulse Mode – this is the default mode that pulses the device every 0.02 seconds to give you a constant boost of ongoing power.

Power ECO – this mode is designed to save battery life once you get down to a 40% charge.

DIY – This mode opens up another menu which is more like the menus you’re probably familiar with on other devices. You can use regular variable wattage mode (with Hard, Normal, and Soft ramp-ups), Variable Voltage mode, Variable Temp mode, Custom Curves, Bypass Mode, and Super Player mode (which lets run as low as 0.03 Ohm or as high as 5.0 Ohm resistances).

System Settings – In the settings menu, you can reset the puff counter, change the screen brightness, flip the screen, or reset everything to default. You can also check the version info.

You can see the manual here if you want to look at each option more in-depth. – https://www.vaporesso.com/hubfs/imgs/downloads/manual/Gen-s-manual.pdf The device charges using a micro-USB. I’m really surprised that Vaporesso didn’t make this a USB-C charging port. I think that would have made the Gen S more of an upgrade. But it is what it is.

It still has 2.5 amp fast charging, which is good. The Vaporesso Gen S comes with the NRG-S Tank, which is a big 30mm diameter tank. The size of this thing is pretty telling of what it’s designed to do. Hold a ton of liquid and blow huge clouds. The drip tip is a basic black drip tip. And like the original NRG tank, this drip tip has a little lip on it that lets it slide over the protruding section of the top cap. That means that while you can use other tips on this tank, it’ll look a little funny. The top cap is where you fill the tank. There’s a little arrow that shows where to push the cover to slide it open to fill. You get two glass tubes in the box. The 8ml bubble glass tube is pre-installed on the tank and the spare in the box is a 5ml straight glass tube. The pre-built coils screw into the base. Nothing special about that. The base is also where the adjustable airflow is.

The adjustable airflow ring moves smoothly from side to side and it opens up two large airflow intake ports. Those airflow ports are big and give you the ability to get some big hits. Two coils come in the box. This coil is built at a resistance of 0.15 Ohm and rated for 50-75 watts. Normally, Vaporesso’s coils are great right out of the box, but for some reason, this one needed some break-in. It tasted really funny for a while, but it cleared up after vaping about a 1/4 of the tank. At 50 watts, it’s a nice medium warmth vape with a lot of vapor and at 75 watts, it gets much hotter. It worked well all around though. After breaking in, the flavor is very good. This coil is built at a resistance of 0.18 Ohm and rated for 50-85 watts. At 50 watts, the vapor is very, very cool. It has moderate flavor production. At 85 watts, the vapor is much warmer and much more flavorful. The 0.15 coil head has better flavor though. These two coils will give you a good idea of how the tank performs at high wattage, but there are also a bunch of other coils that you can use in here. There’s a large range of GT coils that you can use in the NRG-S tank, so if you have a particular style of vaping that you prefer, you’ll be able to find a coil to match it. They have coils of all different wattage ranges, metal types like Kanthal, ni-200, stainless steel, ceramic, and coil styles like regular or mesh.

All of them cost the same too. You can get a pack of three coil heads for around $19.20

I like that there are new colors and a new tank that comes with the kit, I would have liked for Vaporesso to make bigger changes to the Gen S model. I think they could have at least added a USB-C charging port. But the Gen S is still an excellent device that has a lot of power, a lot of features, it looks great, feels great, and fires fast. The NRG-S tank is a nice upgrade from the original. The tank is nice, hits hard, and has great flavor.

If you’re looking for something smaller, check out my review of the Vaporesso Gen Nano. It’s practically the same thing, just in a smaller size.

This Vaporesso Gen S kit was sent to me for review from Vaporesso and you can get it from them for $90.20.