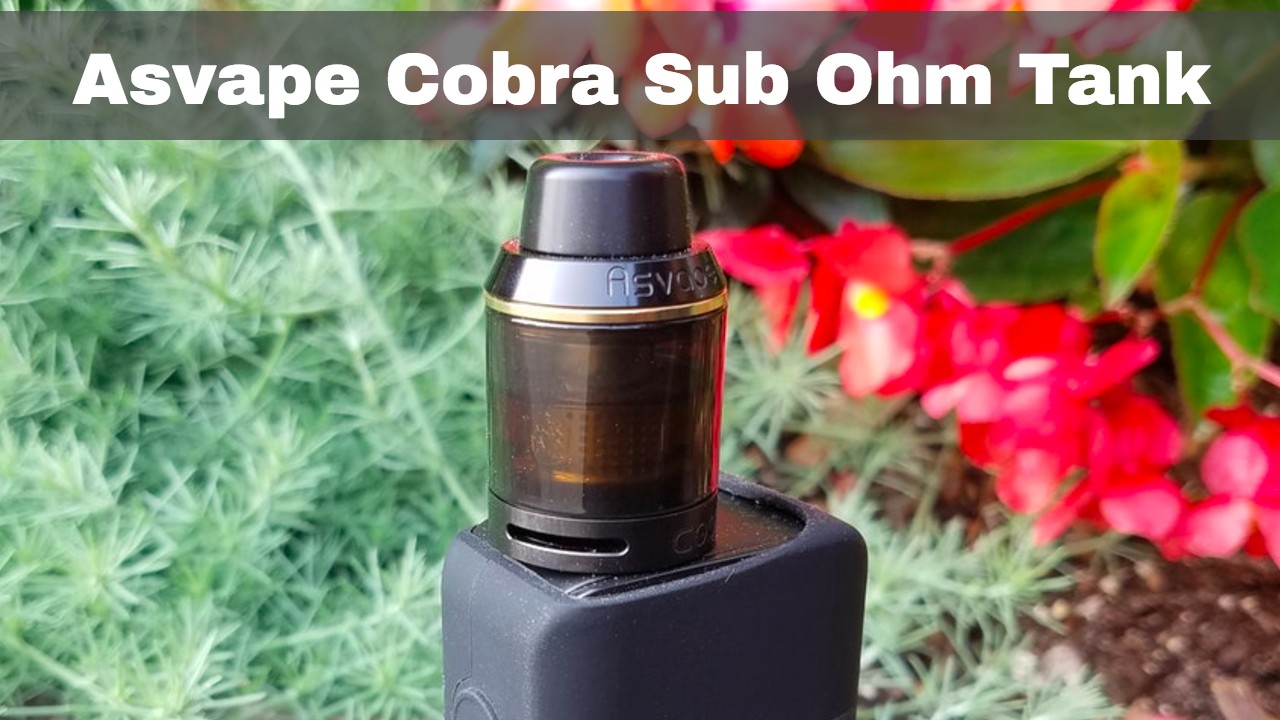 The Asvape Cobra was sent to me for the purpose of this review by HeavenGifts.com. They sell it for $37.99

This is a 24mm sub ohm tank created by Asvape. I took a look around their website and I’ve learned that the “A” and the “S” in Asvape stands for American Standard, which is interesting since they are in China. But I guess we’re their target market. They’ve been in business for about 7 years according to their Facebook page. They sell three different mods and two different atomizers – one of those atomizers is this Cobra Tank.

So let’s take a look at it.

In the box you’ll get:

I think the overall look of the tank is really nice. It’s small, sleek, and modern, at least in my eyes. The machining seems immaculate too. The threads are probably the smoothest I’ve seen on any tank yet.

In regards to the design of the tank, there are some things I would have liked changed. For example, I think the top cap could have benefited from knurling or some sort of grip, because while it might affect the aesthetics, it would make the top cap easier to take off and refill.

The 510 pin also doesn’t protrude much, so it’s not a tank you’d used on a hybrid, but that’s not a big deal since not many people use hybrids and it’s also not expected for a tank to work on a hybrid.

The o-rings seem decent, but at least on my tank, they were a little messed up right out of the box. Also not a big deal.

Ok, and now here’s the big one. I clean all of my tanks in an ultrasonic cleaner before I use them for the first time, and when I pulled this one, I saw little black specks in the water. I though, jeez, I’m glad I cleaned it. That thing was dirty. Then I started to put the tank back together and realized that all of those little black pieces were actually parts of the tinted coating from the tank.

It started to fall right off the tank in my hands. Just peeled right off. I’ve been using the spare glass tank ever since and it doesn’t peel at all with normal cleanings or general use though. So is that a con? I don’t know if it is to you, but it is to me. The black tank is the only one that has tinted glass. The stainless steel model has regular clear glass, so it’s not an issue with that one. So keep that in mind when buying. If you get the black one, don’t put it in an ultrasonic cleaner.

Their use of nichrome is really interesting because not many vendors do nichrome anymore. It’s pretty smart too. Nichrome heats faster than other wires, which allows it to perform well at lower wattages. That means you can get some really good performance out of these coils at only 35-45 watts.

Inside the coil head are two single parallel wrapped wires, making one coil. The two parallel strands of nichrome are wrapped in cotton.

The wicking holes are what make this coil really unique. There are 130 tiny wicking holes going almost all the way around the coil head, allowing it to wick from all sides. According to Asvape, their coils are designed to wick well with all types of e-juice, even 100% VG e-liquid. I’ve tested it and it’s true. It really does wick well with 100% VG e-juice. The coils are impressive.

I’ve found that coils have a typical lifetime, which for me is about two weeks. Then they start to lose flavor.

Like I mentioned earlier, these coils are designed for 35-45 watts. I typically vape hot, so at 35 watts it took me a long drag to get a satisfying hit. But it was still a good hit with plenty of vapor. At 45 watts, it’s much more satisfying to me and the flavor is still good.

The drip tip is basic and made of POM, so nothing special, but it’s very thick, which might help with heat dissipation. The drip tip slot is also a standard 510 size, so you can use your own drip tips if you want.

It has adjustable bottom airflow. There are two airflow slots on the base of the tank. Even all the way open, the airflow slots have of some restriction. It’s not like breathing through an RDA, but it’s a small sub ohm tank, so I think the airflow is perfect. The airflow control is also really nice. It moves smoothly and each little adjustment is noticeable. All the way down is very restricted, you can even do MTL but it takes a couple of drags to get a good hit.

It’s a top fill tank and it’s mostly easy to fill. The top cap screws into the top of the tank and you have to unscrew it to get access to the fill holes. The top cap is smooth and doesn’t have any grip or knurling so it might be hard to get off if you over-tighten it, but I haven’t had that problem at all.

The fill holes are a little small, but you can fit the tip of glass dropper bottle in there. But filling the tank might get a little messy.

The flavor is actually really good. I noticed how good the flavor is on the very first hit I took, which was at 35 watts. It seems just as good at 45 watts.

I haven’t any major problems with leaking, but it does seem to leak just a little bit around the airflow holes. It might just be buildup. I didn’t notice any e-juice leaking from it for over three weeks. So it’s not enough to spill out. I’ve only had to wipe it down a little, but it’s not leaking so bad that it get all over my hands or clothes or anything.

Overall, I think it’s a good tank for people who like to vape at lower wattages and for people who want good flavor. The cons that I have are minor and I think the pros outweigh them. But because of that issue with the tint peeling off, I’d recommend only washing by hand or buying the stainless steel version that doesn’t have tinted glass.