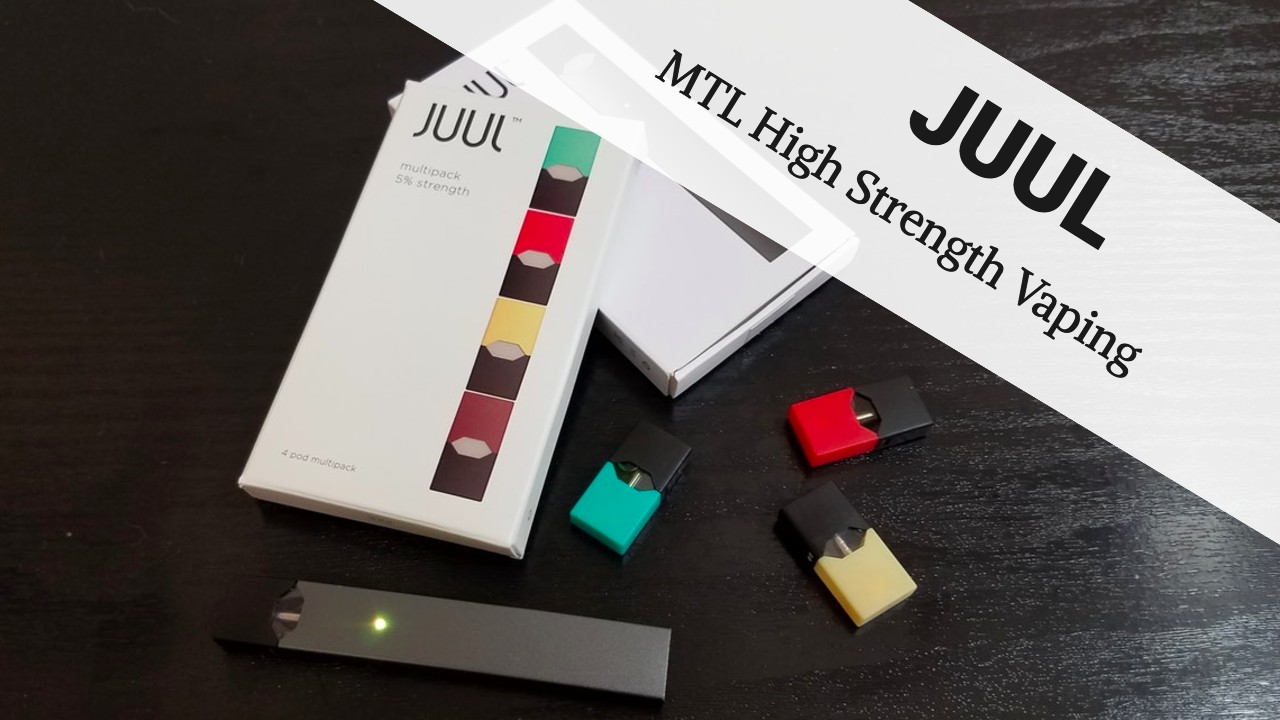 I purchased the Pax Juul starter kit myself. It comes in a nice little package with two boxes. One package has the pods and the other box has the Juul and the USB charger.

You can get a starter kit for $49.99 which comes with everything I just mentioned, as well as 1-year warranty.

For the average person looking to get off smoking, there’s not a lot that needs to be said about the Juul. You plug in a pod and hit it. It’s draw-activated using a pressure sensor, which means all you need to do is take a drag and it turns on. There are no buttons to press.

But if you’re interested in the technical details, let’s really dig in.

With a pod installed, it’s just under 4 inches tall. It’s a half inch wide and a 1/4 inch thin.

It operates using a lithium-ion battery and the casing is made of aluminum.

The Juul has two metal pins that connect to two flat metal plates on the pods.

Something to note about the pins is that they can get e-juice or condensation on them over time, which can cause misfiring. So you will need to clean those with a q-tip every once in a while, which is actually what Juul recommends also.

On the other end of the Juul, you’ll see four small pins. These connect to the included USB charger. The end of the Juul and the USB connector both have magnets to keep the device on the charger.

Juul explains on their website that you can charge using the USB port on your computer, but because the charger and device have magnets, it can sometimes cause some computers to go into sleep mode. It won’t damage the computer though.

Juul claims that a full charge should last as long as a full Juul pod, or about 200 puffs. A drained battery will take about an hour to charge.

As you’ll notice with the charger, this is made specifically for the Juul, which means that if you lose this little charger, you’ll need to buy a new one. You can buy the charger $9.99.

The pods are heat-resistant, food-grade plastic cartridges that fit right into the Juul. There are two metal contacts that connect to the pod. The wicking material is made of silica and the contacts that heat up the e-juice are made of nichrome. You’ll also see a small metal tube running up the middle, which is the chimney where the vapor comes through.

There are small ridges on the base of the pod where the indents on the Juul catch and hold the pod on place.

They are designed to be non-refillable, but you can find videos on YouTube of people who have taken them apart to refill.

There are five flavors:

Mango doesn’t come in the sample pack so that’s the only one I wasn’t able to review. I’ve heard from a lot of people that mango is their best flavor though.

Cool mint has a nice strong minty flavor, but I’m not sure I get peppermint. Either way, I think menthol lovers will like it. It’s a very good menthol flavor.

It’s definitely a mild tobacco e-juice, but I wouldn’t call it rich tobacco. It’s not bad but nothing special either. It’s similar to other cheap tobacco flavors you’d find on the market.

This one does taste like several fruits mixed together, but the grape flavor overpowers the others. I might get a little of the berries, but none of the peach. It’s a decent flavor though.

It has a creaminess to it, but it’s also a little earthy. I can taste the vanilla, maybe a slight hint of custard, but it’s not what I would call a creme brulee. But I can see that it was the flavor they were going for here. Not as good as I would have hoped, but I like it.

I think all of the flavors are good for what they are, but they don’t compare to other e-juices on the market. I would have liked for all of them to be stronger in taste, but considering the high nicotine content, I think the flavors come through well.

The nicotine in the pods is one of the features that Juul is well-known for. Their e-juice is strong at 59mg and is derived from nicotine salts. The nicotine salts allow them to use very high nicotine content without an extreme throat hit. They use benzoic acid to make the nicotine more absorbable by the body.

There’s still a throat hit here though and it’s different than regular freebase nicotine, which is what most other e-juices use. It has a bite that you’ll need to get used to. It makes me cough sometimes. Juul uses this formula so that the hit is more similar to a tobacco cigarette, which is what the Juul is designed for – smokers.

Juul uses a proprietary technology to control the power output. They claim that it delivers the appropriate power at all times during use and the technology monitors the quality and delivery of vapor, but they don’t explain anything else beyond that.

There is a small light on the Juul that lights up white while you are taking a drag and it can also tell you the battery charge. If you tap the device twice, the light will tell you the charge. Green means high, yellow means medium, and red means low.

It has a tight draw, but not extremely tight. You can’t really take a satisfying lung hit though. You’ll need to draw into your mouth, then into your lungs.

The draw is nice though. It felt a little airier than I would have liked at first, but I got used to it.

I haven’t had any issues at all with wicking. I get a great hit every time, even after taking multiple hits in a row.

There are only two things that I didn’t like about the Juul; bad connections with the pods and the magnet.

First the magnet. Most of us keep our devices in our pockets or purses, but because the Juul has a magnet, it can ruin the magnetic strips on your credit cards. So you have to make sure that you don’t keep the Juul up against any cards.

And secondly, the biggest problem with the Juul is that it doesn’t always make a strong connection. You’ll see a ton of people complaining about this online. Many people say that it’s an inconsistency in the manufacturing of the pods and some say that the connections need to be cleaned. Both of those things are true. I had problems on the very first pod I tried so I know the connections were clean. I had a connection problem with the second pod too. The third and fourth pod I tried worked great.

But with the bad pods, I had to push the pod against my lips while taking a drag to get it to connect. It’s not comfortable to use that way. It’s a really big con in my opinion.

My go-to portable device when I don’t want to use a full-size mod has been the NJOY Daily cigalike. I love those things. They taste good, deliver high nicotine, and they fit in my wallet. But they are disposable, so they don’t last long.

The Juul is a little slimmer than the NJOY Daily, it looks much better, and it has refillable pods. The taste is probably as good as the Daily and the nicotine levels are about the same too.

I thought about replacing the NJOY Daily with the Juul as my go-to discreet device, but since the Juul has a magnet, I can’t keep it my wallet or it might damage my credit cards. I like to keep my little cigalike in my wallet so the NJOY Daily keeps it’s spot there for now.

I both love the Juul and I hate it. I love how sleek it is, how strong the nicotine is, and how small it is. But I hate how hit or miss the pod connections are. That’s a huge problem for me and almost makes me want to avoid recommending. But when this thing fires, it’s great. I mean really great. When you get a good pod, it’s an awesome little device. So despite the drawbacks, I think I would still recommend it just because of how good the Juul performs when it has a good pod.