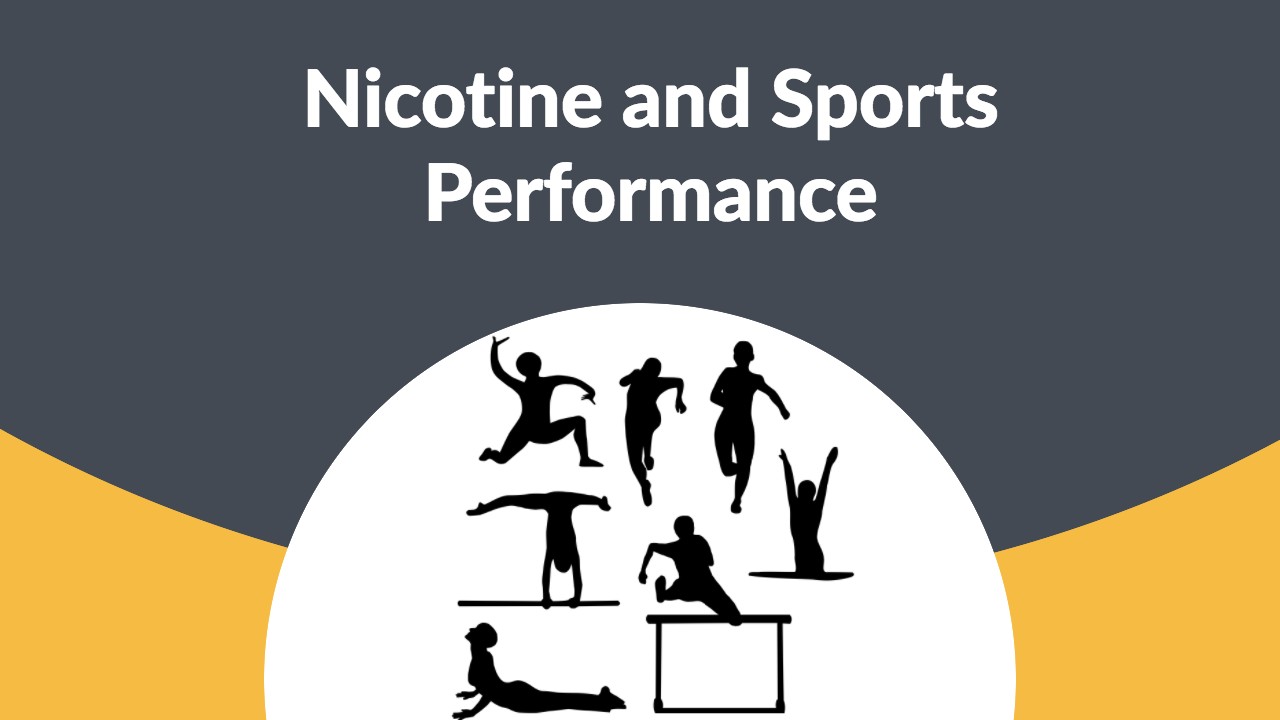 Here’s a question many newer vapers ask – is vaping bad for athletes? Any experienced vaper who has switched from smoking will tell you that they’ve seen very drastic health improvements after switching. But what about nicotine in general? For example, it’s been a long tradition in professional baseball with athletes chewing tobacco. This could be due to beliefs of nicotine and enhanced sports performance. Athletes and nicotine use appears to be growing.

According to a study published this month, anywhere from a third to nearly half of serious athletes playing team sports are using nicotine to enhance performance. The author of the study, School of Sport, Exercise and Nutrition Senior Lecturer Dr. Toby Mundel found that nicotine use is fairly high in team sports and is increasing. So he designed this study to try to figure out why athletes are using it and how it affects physical performance.

He reviewed 10 previously performed studies that looked at the effects of nicotine on muscular strength and power, endurance, and high-intensity exercise. From these studies he found that two showed nicotine as having an ergogenic effect (showing an increase in performance), one study showed that nicotine impaired performance, and the rest of them (7), showed no change.

All of these studies were small studies performed on healthy and active participants, although none studied elite athletes. But outside of the studies, there is other research that shows elite athletes are using it, which we’ll talk about next.

Who Is Using Nicotine?

Dr. Mundel excluded any studies that reported the use of smoking since tobacco smoking would not be beneficial to a high performing athlete. His research found that nicotine use is high within elite and professional athlete environments. It’s most prevalent in baseball and ice-hockey, but there is also high use in strength-based and winter sports. People in team sports use it the most and endurance athletes use it the least.

A regular doping control test at the 2009 men’s World Ice-Hockey Championships looked at 72 players, two men from each team. What the tests found is that out of 72 people, 53% of them had at least one of nicotine’s metabolites in their system. This likely means that they use nicotine, but maybe not for performance enhancement. But based on levels of concentration, 36% of these players appeared to be actively using nicotine, either directly before the game or even during the game. Two samples showed very high concentrations, more than a typical nicotine user, which suggested that these two players were using nicotine for performance enhancement.

That was the beginning of research into nicotine and doping. After this, a one year study took place that analyzed 2,185 urine samples from athletes in 43 different types of sports. Traces of nicotine were found in 23% of samples, with athletes in American football, ice hockey, and wrestling using it the most.

Why Athletes Are Using Nicotine

According to Dr. Mundel, athletes who use nicotine have stated that they do so because it prevents dry mouth, it controls weight, it improves reaction time, it improves focus, and it helps with relaxation. Dr. Mundel confirms that studies have shown cognitive enhancement, better memory, improved focus, and better motor skills.

He notes that there are various factors that impact the effects of nicotine absorption, such as the user’s nutrition, age, race, genetics, and other medications being used.

Different methods of delivery also affect absorption. Smoking results in the highest blood concentration of nicotine, followed by vaping, then by transdermal patch, then by snus. The fastest methods of reaching maximum nicotine concentration are by smoking which happens at 5-8 minutes, then by Inhaler at 30 minutes. Here’s where you can see another reason why smoking is so addictive. There’s a huge gap there. 5-8 minutes vs 30 minutes. Smoking is definitely the fastest way to get nicotine. Vaping actually falls at the very bottom of the list, taking about 70-75 minutes to reach peak concentration. It’s followed only by the patch, which takes 6-9 hours.

One quick thing I want to point here is that this doesn’t mean it takes 70 minutes for the nicotine to be absorbed by the body by vaping. That’s just how long it takes to reach the highest potential concentration. You might actually see results much sooner than that from lower levels of nicotine.

What the Studies Show

As for positives, researchers found that peak torque while jumping increased by 6% after using 2mg nicotine gum. Endurance time while cycling improved by 17%.

One thing I want to note here is that all of these tests were performed using smokeless tobacco, which according to this study, we now know takes 60 minutes to reach maximum nicotine concentration in the blood. All of the studies were done before participants reached that 60-minute mark. So I wonder if they would have seen different results if they would have waited longer.

Also, one of these studies specifically testing vaping nicotine, but this is one of the studies that saw no improvements in performance. This test consisted of 20 healthy non-smokers vaping on 18mg nicotine cartridges once every 30 seconds for 10 minutes.

So all said and done, it looks like there are pros and cons to when using nicotine for performance enhancement, and the pros probably don’t outweigh the cons.

And something that Dr. Mundel points out is that there are notable limitations in these studies and with the participants involved, for example, some subjects having different tolerances to nicotine, different individual responses depending on the delivery methods, and some participants failed to follow the scientific procedure.

So if you plan to try nicotine for performance enhancement, consider that you will probably have to test dosages and delivery systems to find what works for you.

I’ve actually known about the potential performance enhancing effects of nicotine for several years. It was one of the first things I tested on myself when I started vaping again in 2015. I’ve tested vaping nicotine several times both before and during weight training sessions. I’ve also tested it during endurance cycling rides. Personally, I don’t like it. It makes me sluggish. But my tests were very non-scientific. If I keep testing, eventually I might find the perfect dosage, timing, and delivery method that works. But then again, maybe I won’t.

Another question I hear a lot is about concerns with using nicotine before running. I haven’t tested this myself, but I would consider running a sort of endurance sport. Based on the results of the studies above (and with my experience during long cycling rides), nicotine probably wouldn’t help. But if you’re a former smoker, using nicotine detached from the smoke would be much better before going for a run.

And one more thing I think is worth mentioning here. Many elite athletes might not be using nicotine for performance enhancement. They might be using it to abstain from smoking. And this goes to show that even professional athletes can use nicotine and play at the top of their game without suffering the negative health effects of smoking.

This was a great study from Dr. Toby Mundel and I had a lot of fun reading it.