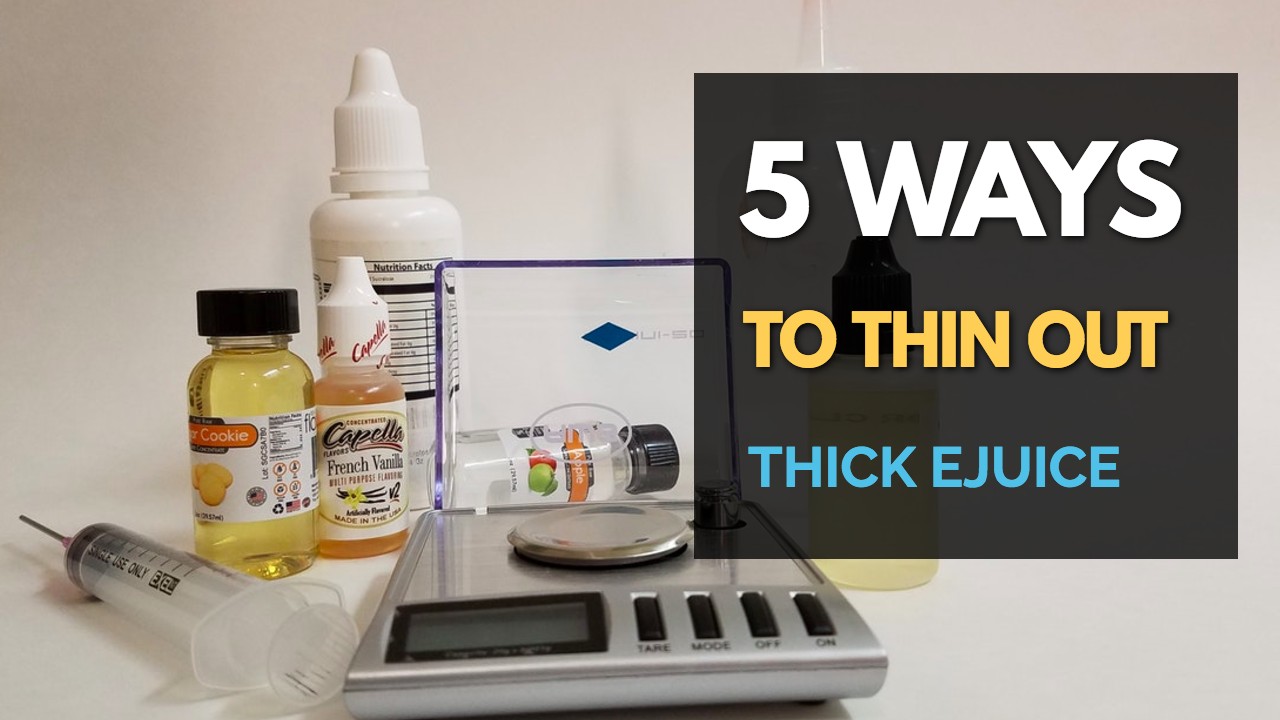 I came across a really interesting thread online about thinning out e-juice. This person has a friend that has an allergic reaction to PG, so his friend asked him to create a PG-free e-juice. The problem is that his friend uses a tank that can’t wick high-VG e-juice because it’s just too thick and viscous. So he’s asking if there’s a good method to thin-out 100% VG e-juice.

This is something I have actually considered before but never researched. Every once in a while I come across a high-VG store-bought e-juice that’s much thinner than usual. I know they are thinning it out, but I don’t know how. I’ve always assumed water.

Here’s what I found.

You might think adding vodka is dangerous, but you might not realize that a lot of the flavor concentrates that we use for vaping already have alcohol in them. It’s not a large amount of alcohol and not all flavors have alcohol, but if you vape, you’ve probably vaped e-juice that has alcohol.

It’s generally considered safe and is actually why many people suggest soaking old coil heads in vodka to clean them and reuse them.

If you want to thin out your e-juice, try adding 5-7% vodka. Be aware though that this will add a little throat hit to your e-juice.

1,3-Propanediol or PDO for short, is a PG alternative. Instead of using VG, you can use PDO to avoid the allergic reaction, but still, maintain some of the characteristics of PG. The issue with PDO is that it’s a little more expensive than VG or PG and it doesn’t carry flavor as well as PG. But it’s an option if you want to try it.

This is basically VG with distilled water added, typically diluted with 20% of water. I’ve heard that it’s much thinner than straight VG, but not as thin as PG. You would use this in place of PG. So if you’re going for a 70vg/30pg mix, use 30% AG instead of PG. Some people will make this themselves, or you can buy it for pretty cheap online. I’ve seen 4oz for $4.

Distilled water is typically recommended at the same percentages of vodka, so about 5-7%. You want to get purified, distilled water, preferably from a pharmacy or online from a reputable seller so that you know it’s sanitized and safe. Don’t use tap water.

Water for injection is water designed for medicinal use, such as for diluting or dissolving drugs to be injected into the body. This is a sterilized water that has no bacteria, antimicrobial agents, or added buffer.

So there you go, several ways to thin out your e-juice when if you can’t or don’t want to use PG.