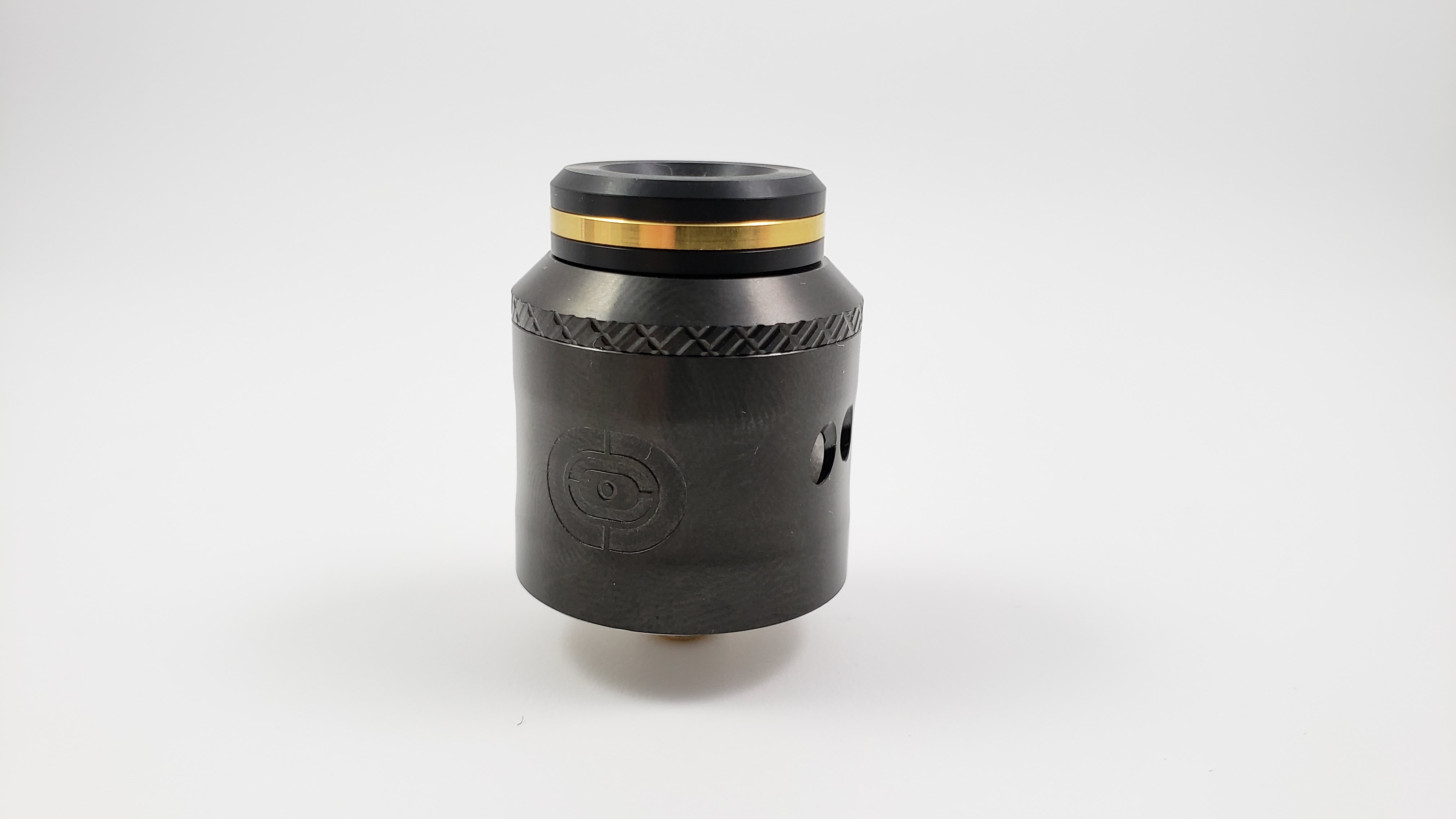 The Occula RDA sent to me for review from Augvape. This is a new RDA made by Augvape in collaboration with Twisted Messes.

If you’re not familiar with Twisted Messes, he’s known for the amazing coil builds he creates and puts up on Instagram, he’s known for creating several RDAs including the massively popular Twisted Messes RDA, and he’s known as Kent, the really funny redhead guy that shows up in a lot of Grimm Green’s travel vlogs. Alright, let’s talk about this new RDA. Twisted Messes usually develops his own products, but he said that he decided to work with Augvape on this one because he wanted to make something that was more affordable and accessible to vaper.

It’s a nice looking RDA. It’s really shiny, there’s some knurling on the top cap, there’s an arching line of airflow holes, and you’ll find the Occula logo on both the barrel and the bottom of the RDA.

That logo is particularly strange to me. For any of you gamers out there, you’ll immediately recognize that the name of the RDA and the logo come from the Oculus VR system. The logos are different, but the Occula logo is clearly inspired by the Oculus. And I know that Oculus is a real word. It’s the small opening in the middle of a circle. But I don’t see how that’s represented in this RDA. Anyway, I’m interested to know why they chose the Oculus for inspiration.

If you look closely, you’ll also notice that the barrel curves inward just slightly, kind of like the Recurve from Mike Vapes, but obviously much more subtle. It looks good. On the top cap, there is a really short low-profile 10mm wide bore 810 drip tip. There’s no o-ring on it, so it’s held in place with an o-ring in the top cap instead. It has a stainless steel ring on it that gives it a more interesting look and adds to the character of the overall design. It looks pretty cool.

This is the only drip tip included in the package, so if you don’t like your lips touching the top cap while you’re vaping, you’ll need to use your own 810 drip tip instead.

The package doesn’t include a 510 adapter either, so you can’t use 510 drip tips on here either, but I don’t think this really caters to the 510 drip tip crowd anyway.

If you look at this from the right angle, you can see that they airflow intake holes are angled down towards the deck.

If you pull the top cap out of the barrel, you’ll see that it has a really long wall and a shorter one. On the inside, there’s also some slots built in that prevents the barrel from spinning while it’s on the deck. That’s so that it doesn’t spin around freely when tightening or taking it off of a device, which is always a good feature. That also keeps your airflow holes generally in the right place to hit the coils while you’re vaping. You can move it a little bit to each side if you’re using only one or two airflow holes so that it hits the coils where you want it to.

With all airflow holes open, you get a ton of air coming through here. You can breathe through it. And that makes sense for an RDA designed for big coil builds. But you can also shut those down if you like a little more restriction.

Another plus here is that you can completely close off the airflow on both sides. That’s great for being able to put this in your pocket and not having to worry about it leaking out of the airflow holes. In the bottom of the liquid well of the deck is the Occula logo and two big blocky posts. These posts use a clamp system to tighten down the coils with these screws that look like heavy duty bolts. Those post screws are M3 screws. This entire deck looks like it can take some punishment.

When you open up the screws, the clamps open up and give you a ton of space to build on. This type of clamp system is a little surprising just because it feels a little old school to have only two big slots, rather than having four slots to separate all of the leads. I actually appreciate this as a sort of throwback or nod to OG coil builders. It certainly adds to the difficulty of building on here, but the difficulty is also one of the things that I think makes it fun to build on. So like with other decks like this, you need to get both coils in place before you can tighten either of the posts down. Get your coils measured, cut, and in place, then tighten one side down. Fine tune the other side a little and then tighten the other clamp down. Then you can position those coils you like. Pay attention to where the air holes are on the barrel and you’ll find the right positioning. You can put the coils at the same height or below since they point slightly downwards.

The Occula comes with a squonking pin in the accessories bag, so you can switch that out at any time. You’ll see that when it’s installed, it sits a little higher than the normal solid pin.

In my experience, I prefer using this RDA in a dripping mode rather than squonking mode, but that’s because I like to run big coils in here. And to get the power that I want to run big coils, I need a dual battery device. I have a couple of dual battery squonking devices, but I don’t like carrying those around because they’re so big and heavy. So I prefer a regular dual battery mod. It’s cool that this comes with a squonking pin, and I’m sure a lot of you like squonking, but I think this really caters more for dripping.

You get a lot of airflow with it wide open. You can pretty much breathe through it. If you like vaping at high wattage, you’ll like all of that airflow.

If you’re vaping at really high wattage, the top cap can get a little hot, and that drip tip is so short that your lips will touch the top, so that’s a drawback.

As for flavor, there’s a big difference between the various airflow settings, which is to expected. Wide open, and you get a lot less flavor. The more you close it down and the more flavor you get. The flavor is decent overall, but it’s not a flavor-chasing RDA by any means. Since this comes from Twisted Messes, a guy known for building crazy coil builds, this deck really caters to people who want a lot of room to build in. The clamp system makes it generally easy to build on, but it’ll be a little challenging at first for anyone who isn’t familiar with installing two coils into two slots. But that’s not much of problem.

There’s plenty of airflow, the flavor is good, and it’s a great looking atomizer. Overall, I think this is a pretty sweet RDA and I’m really glad that Twisted Messes collaborated with Augvape to make it accessible to more people.

I got this for review from Augvape. You can get it from them or other places for around $35.