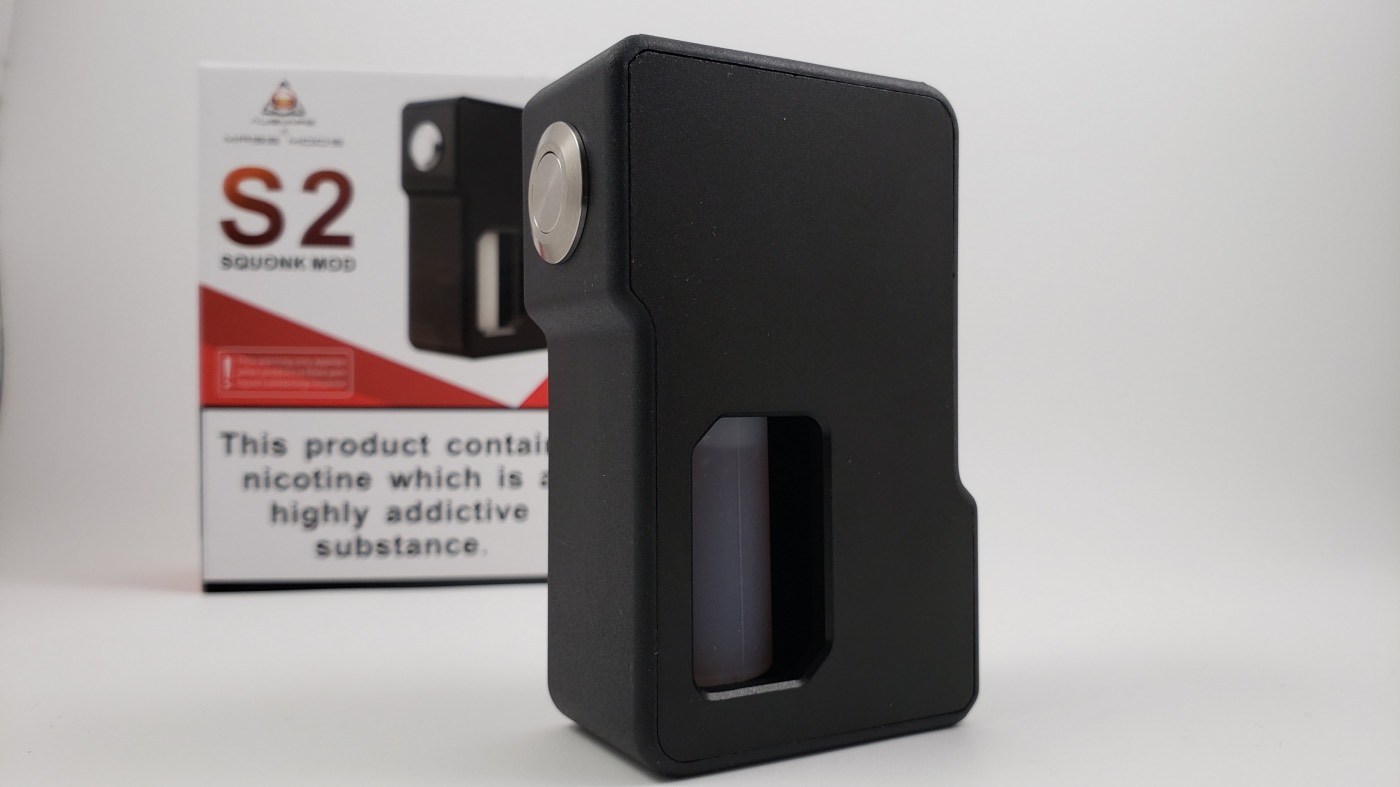 The S2 Squonk mod is a collaboration between Augvape and a company named Mass Mods. Check it out on Massmod’s website here. I’m not familiar with Mass Mods but it looks like they’ve released a few higher-end mech mods in the past. So my guess is that they wanted to bring their designs to a wider audience by making it more affordable by partnering with Augvape, just like what Twisted Messes did with the Augvape Occula RDA.

If you go to MassMods.com you’ll see that they specialize in unregulated devices. They only have three products up on the site, one of which is the CS1, which is the original version of the Augvape S2. That one sold for $200.

The original version had some very interesting specs, it came in multiple colors, and it had some crazy features like a human touch sensor on the button, a three-position master switch, a Mitec switch, and a colored LED battery indicatory. Those are the types of things that made the original version cost $200.

Most of those features are no longer included in the S2. The S2 is pretty much a stripped-down version of the CS1 that only comes in black, hence the reason why this costs $40 as opposed to $200. And that all makes sense to me. On the top of the S2 is the 510 connector, and you’ll see that it has a large o-ring in the middle of it. Since this is a squonking device and you’ll have e-liquid passing through the connector, that o-ring prevents leaking. It’s a cool feature.

The pin is also spring-loaded, so you get some extra compatibility here for any RDAs you might own that have really long pins. When you take the panel off of the S2, you’ll see that the battery positions are labeled very clearly, so there’s no worry of putting the battery in backward.

Since this is an unregulated device, that means there’s no chip in here to protect you from a short circuit. You need to understand Ohm’s law when using a device like this.

And while not everyone does it, I also highly suggest testing your atomizer on a regulated device to make sure it’s built correctly before you use it here. But hey, that’s just me.

When I use unregulated or mechanical devices, I build very safely. You can build however you like, but I tend to only use about a third of the amperage a battery is rated for. For example, I’m using a 30amp battery, but I only want to draw about 11-12 amps, so I’m building my atomizer to around 0.4 to 0.5 ohm.

That’s only about 35-45 watts, which means I need an efficient build to get a satisfying vape. So I’m going with the trusty Wasp Nano RDA. It’s a single-coil atomizer that runs really well with micro coils.

If you need a nice low wattage RDA for a mechanic squonk. Get the Wasp Nano. I’ve also heard that the original single-coil Recurve from MikeVapes is great for single coil squonking.

The button has a nice etched design to it, it looks good, and it’s large and comfortable to use. There’s only one safety feature here and it’s that you get a MOSFET on the button. The only thing that does is protect your button from shorting out.

The S2 uses a printed circuit board that switches on via a MOSFET. This is a type of transistor that takes some of the electrical load off the switch, which prevents the switch from degrading or failing quickly.

The PCB and MOSFET are located at the bottom of the device, which might be a little concerning, but Mass Mods says that it’s a water-resistant board. So if you do get e-liquid on it, just wipe it off and you should be fine. But I would still highly recommend trying not to let it get wet.

Oxidation is what you see when a piece of metal changes colors. That can impact conductivity, so the gold-plating is a nice thing to have on the battery contacts. The included squonk bottle holds 8.5ml of e-liquid, and that seems to be standard so nothing unexpected. It’s a proprietary bottle, so if you lose this, you’ll need to contact Mass Mods for a new one. The bottle is nice and soft and it works perfectly in the S2. When you squeeze the bottle, it easily pushes e-liquid up into the RDA. I haven’t had any problems with it.

The cap on the bottle looks really nice too and it also has a neat cup feature built-in. If you have e-liquid leaking for some reason, the bottle lid can actually catch it and hopefully prevent it from making a mess. It’s a really cool idea. That’s the S2 in a nutshell. It’s a basic squonk mod with a MOSFET to protect the button. But other than that, it’s basically a mech mod. It’s comfortable to use, it looks nice, it feels nice, and it works really well. There doesn’t seem to be a noticeable voltage drop either, so overall, it’s a great unregulated device.

This was sent to me for review from Augvape and you can get it online for $40.