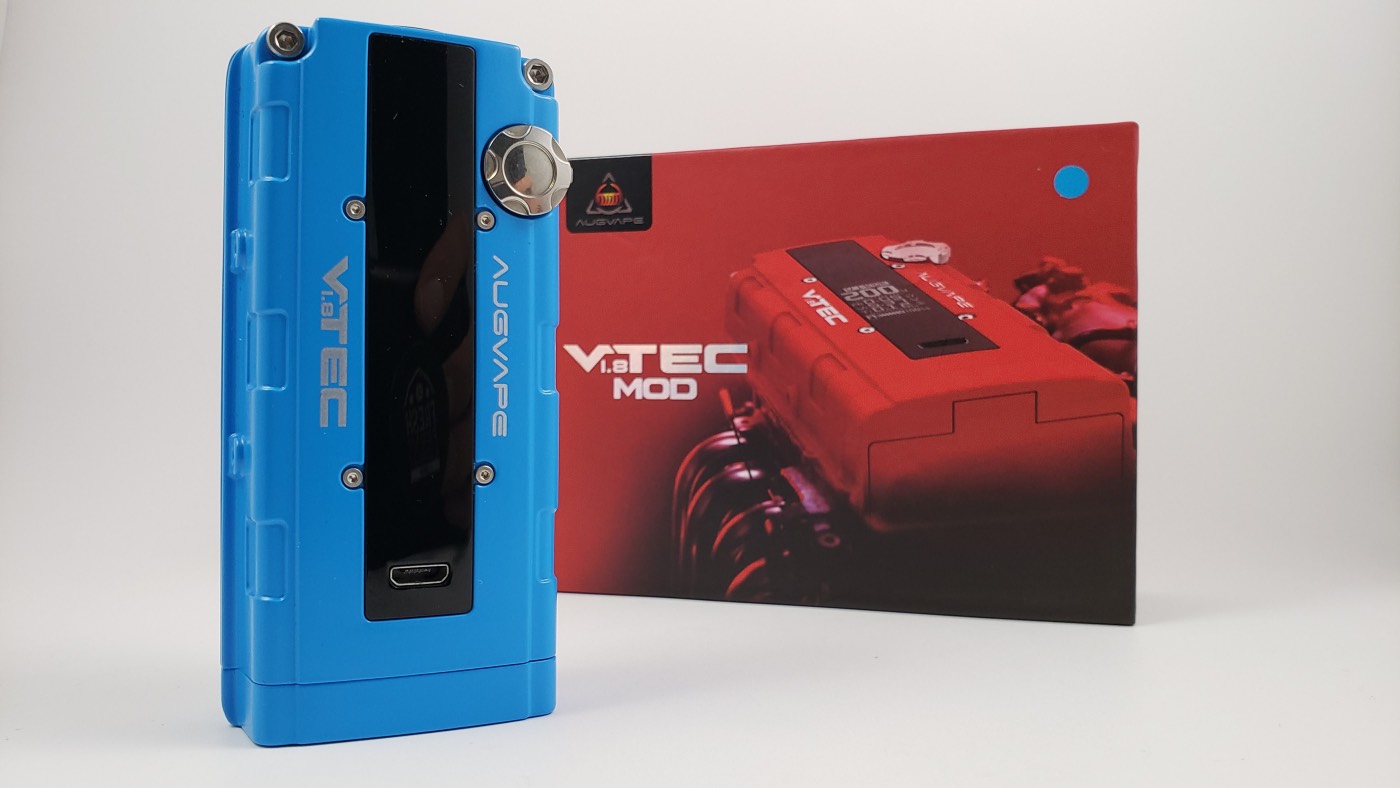 The Augvape Vtec 1.8 was sent to me for review from Augvape. Learn more about it here. This is the updated version of Augvape’s original V200 device, which I reviewed a while back. See that review here. I loved that device and I loved the concept of it too. Augvape says that they improved the battery cover, the software, and made it more affordable. But there are some other differences too. If you’re not familiar with the original V200 version of this device, the design of this device is inspired by the valve cover on the popular B18C Honda engine. It looks exactly like it. And the design of the new Vtec 1.8 is the same as the V200. On the outside, it’s nearly identical other than the names on the front of the devices.

There are some very minor changes in design though. On the original, the 510 connection was designed to look like a rim. On the Vtec 1.8, it’s smooth. The battery door on the original was flat, while the new model now has a slight indent that makes it easier to grab with your fingernail.

And on the back, there’s a strip that runs down the middle. On the original, this was a shiny glossy piece of plastic with the words “Inspired by B18C-r”. The lettering didn’t look particularly great and almost like it was a last-minute addition. It just didn’t fit well. On the new model, that glossy strip is now a matte leather strip with only the word “B18C-R” on it. The leather strip looks better and the typeface looks like it was more thought out. It looks way better.

As far as design differences go, the updates are small, but they seem better.

The one other difference is that the original came in the colors of white, red, and black, and the new model comes in blue, black, and red. So you lose the white device and now get blue.

But the rest of the device is the same. You have a spring-loaded 510 connector at the top, a micro USB port for charging, a nice OLED screen, the up & down scroll wheel designed like an oil cap, and the fire button is built-in behind the top of the screen. The screen is a nice OLED screen. The screen tells you what mode you’re in, the wattage it’s set at, the resistance of your atomizer, the voltage, the time (or how many seconds you hit your device), and the battery levels.

Like the original, this one is still a little hard to see in the sun. To turn on the device, click the firing button five times. And the same to turn it off.

You have four modes available; auto mode, bypass mode, VV mode, and V mode. To access those modes, click the firing button three times and then use the scroll wheel to cycle through. Auto Mode is a normal wattage mode, but it attempts to automatically set your wattage based on the build of your atomizer. But you can easily adjust the wattage at any time.

Bypass mode gives you wattage based only on the charge in your batteries and the build of your atomizer. So it’s like a mech mod. The batteries run in series, so you get the combined voltage of both batteries for more power. If you use this mode, here’s where you might notice a difference compared to the original. The original had a max input voltage of 8.4 volts while this one caps out at 7.2 volts. So you get less power, but it’s still a lot of power.

V-Mode is a normal wattage mode, but with faster ramp-up time than auto mode. It hits pretty much immediately and works great.

VV mode, or Variable Voltage, now lets you set the voltage you want to run, rather than wattage. While in this mode, you’ll also see that where voltage word was showing on the screen, it’s now replaced by the word “power”, which is your wattage. So you can still see how many watts you’re pushing. The battery door is one of the other upgrades that the Vtec 1.8 mod received. It has an indent to make it easier to grab, it’s more durable, and it also secures more tightly than the original. I never had a problem with the original sliding open on me, but now that I comparing the differences, I can see how it is quite a bit less secure than this one. I like the upgrades.

You can see the battery levels for each battery on the screen. I really liked the original V200 device and the VTEC 1.8 mod is basically the same thing, except with some minor upgrades. The best upgrades, in my opinion, are that there’s now a variable voltage mode and that it comes in blue. I love this light blue color.

You still don’t get a temp-control feature and the max input voltage is now 7.2 volts, so a little less power for anyone who likes to use Bypass mode, but overall, the device is just as awesome and even better in some ways, than the original. The biggest con for me would be the delay when firing it, but once you “activate” it, it fires fast.

This was sent to me for review from Augvape and you can find it online for around $45.