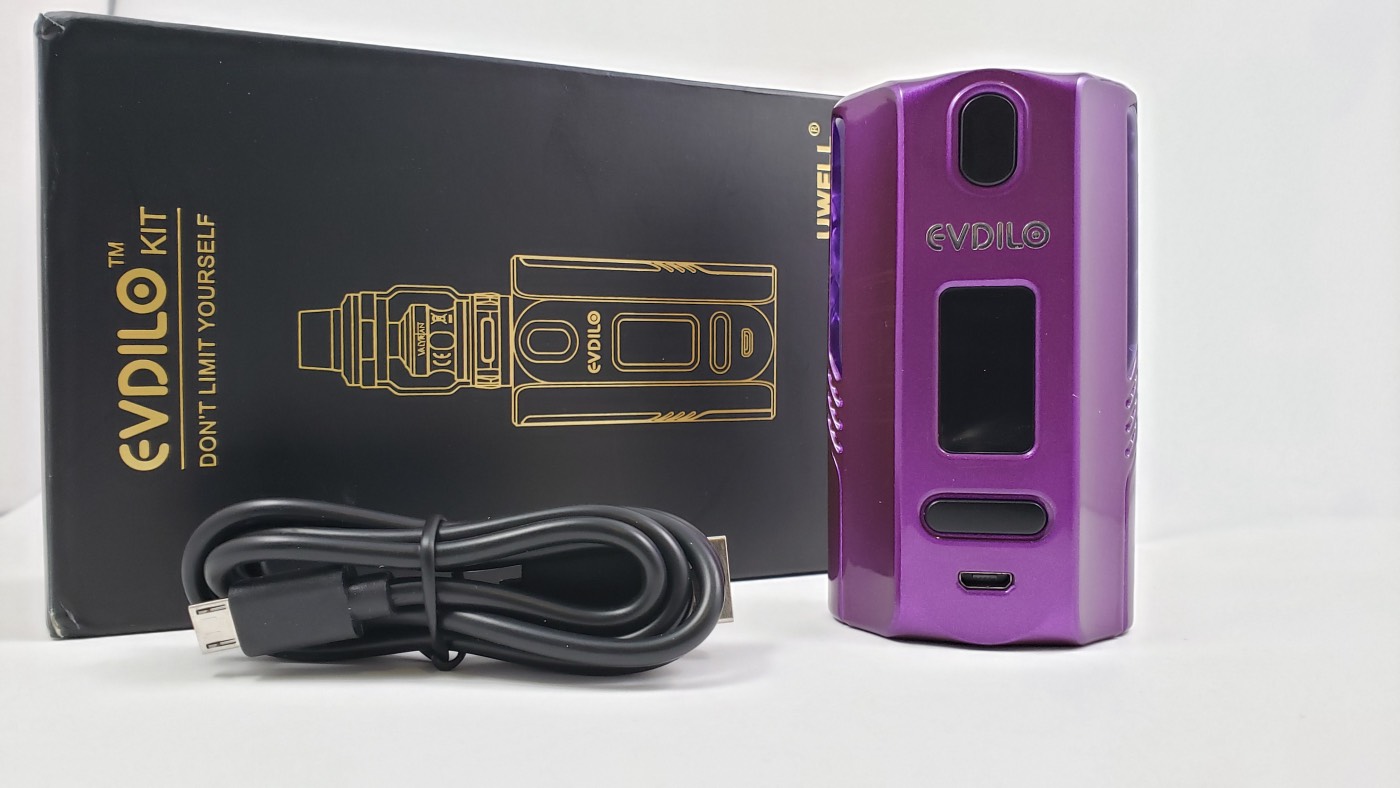 The Uwell EVDILO kit was sent to me for review from Sourcemore.com. Check it out here. This is a dual 21700 battery device that comes with the Valyrian 2 atomizer. I have no idea what device name means or how it’s supposed to be said, but I’ve been pronouncing it as “ehv-dillo” The devices have a nice glossy paint with some matching marble-like accents on the sides. All of the colors except for steel use this glittery sparkle paint which I think looks great. I used to really be into lowrider cars and bikes when I was a kid and we called this type of paint candy-colored paint. I still have an old candy blue painted bike frame in my basement that I’ve always wanted to fix up again. A group of my friends put this thing together with some baby Daytons, a twisted fork, twisted handlebars – the whole works. That thing was sweet, but eventually, the parts were sold over the years and I ended up with the frame somehow.

Anyway, back to the EVDILO.

Aside from the paint, the ergonomics of the device are interesting too. The back of the device dips in and it makes it comfortable to hold with any hand. At the top is the stainless steel 510 connection which has a spring-loaded pin. And because of the size of the device, you can easily fit some big atomizers on here without overhang – somewhere around 28-30mm diameter.

On the front of the device are the big firing button at the top, the bright LED screen, the up and down button, and a USB charging port. To get the batteries in here, you push the switch on the bottom and slide the entire backplate off the device. It’s really cool how they designed this. It comes off nice and easy. The batteries click into place nicely. And then all you need to do is slide the cover back on. Just keep in mind that the battery door has this little pin at the top that fits into a tiny hole on the device. Just make sure that’s in place and you shouldn’t have any problems getting the cover back on. This is a dual 201700 and 21700 device, which is interesting since there aren’t a lot of dual 21700 batteries devices on the market. Being able to use two 21700 batteries makes the device as a whole a little big, but it’s actually a pretty decently small size for having such large batteries. And if you don’t have 21700 batteries, they EVDILO comes with two 18650 adaptors too, so you have that option if you need it. To turn the device off and on, click the firing button five times fast. The bright LED screen turns on and you’ll see your wattage, the voltage, the resistance of your atomizer, a puff timer, and your battery levels.

To get into the menu, press the firing button three times.

From here you can switch between two modes; Power mode and TCR mode.

The power mode is your basic wattage mode. Set the wattage to whatever you like and that’s it. The wattage goes up and down fast, so it’s not a cumbersome process.

TCR mode is for temperature control. This goes from 100 to 315 Celsius or 200 to 600 degrees Fahrenheit. There aren’t any pre-sets here, which is really interesting because that means you need to set the coefficient number to whatever wire you’re using, which also means you need to know what that number is. There are sites online that help you with that if you do some Google searches. In TCR mode and while still in the menu, if you click the firing button once, you’ll be able to manually adjust the coefficient number specific to whatever temp-control wire you’re using. Press the firing button again and you can adjust the pre-heat wattage, which is what the device will hit before it reaches the temperature you’ve set it to. The pre-heat wattage goes to a max of 120 watts.

That’s really it, but you do have a couple of shortcut features outside of the menu. The Valyrian II tank is a sub-ohm tank that uses pre-built coils, so this isn’t a rebuildable tank. This tank uses mesh coils, which they all do these days right? But that means you’ll get a lot of flavor from it.

The Valyrian II tank has been out for a while and a lot of people have already done reviews on it, and it gets some really high ratings. People seem to love it. This is a 29mm tank, so it’s fairly big. And like I mentioned earlier about the EVDILO device, 30mm diameter tanks fit just fine, so this tank fits perfectly on the device. The drip tip is removable and is your standard 510 size, so most other tips will fit on this tank too. The drip tip that comes with the Valyrian II isn’t anything special. Just a plain Delrin tip. The top cap is a spring-loaded flip cap, so to open it, press the button here on the side and it pops open so that you can fill the tank. The fill holes are nice big bean-shaped holes. The tank comes with two bubble glass tubes, both the same size and it holds 6ml of e-liquid, which is pretty standard for a high-wattage mesh coil tank. It has a good capacity. Dual Mesh Coil (0.14 ohm) – This is rated to run best at 80-90 watts and this one works great too. The flavor is very strong and it has no problems running at 90 watts. In my experience, the coils last a fairly long time, especially compared to other coils from other brands. Lots of other people say the same thing. So these are nice coils. This is a bottom airflow tank and the airflow control ring is at the base of the tank. You can open that up wide open to get a lot of airflow if you want it.

That’s about it for the tank. The EVDILO has a terrible name, but it’s a very nice device. It looks great, it feels really comfortable, it can use 21700 or 18650 batteries, it fires fast, the buttons feel good, and the screen looks nice. I like that the menu system is really simple too, but I would say that one con is that the temperature control mode requires you to know the coefficient of your wire. The average user is probably never going to go through the hassle of figuring that out, so it’s more for the hardcore TC users.

The Valyrian II tank is nice too. This is more for the high-wattage vapors out there, and it makes sense that it comes with the 200 Watt EVDILO. The tank has excellent flavor in both coils and it just works well.

In the EVDILO Device Box:

In the Valyrian II tank box:

The UWELL EVDILO kit was sent to me for review from Sourcemore.com.