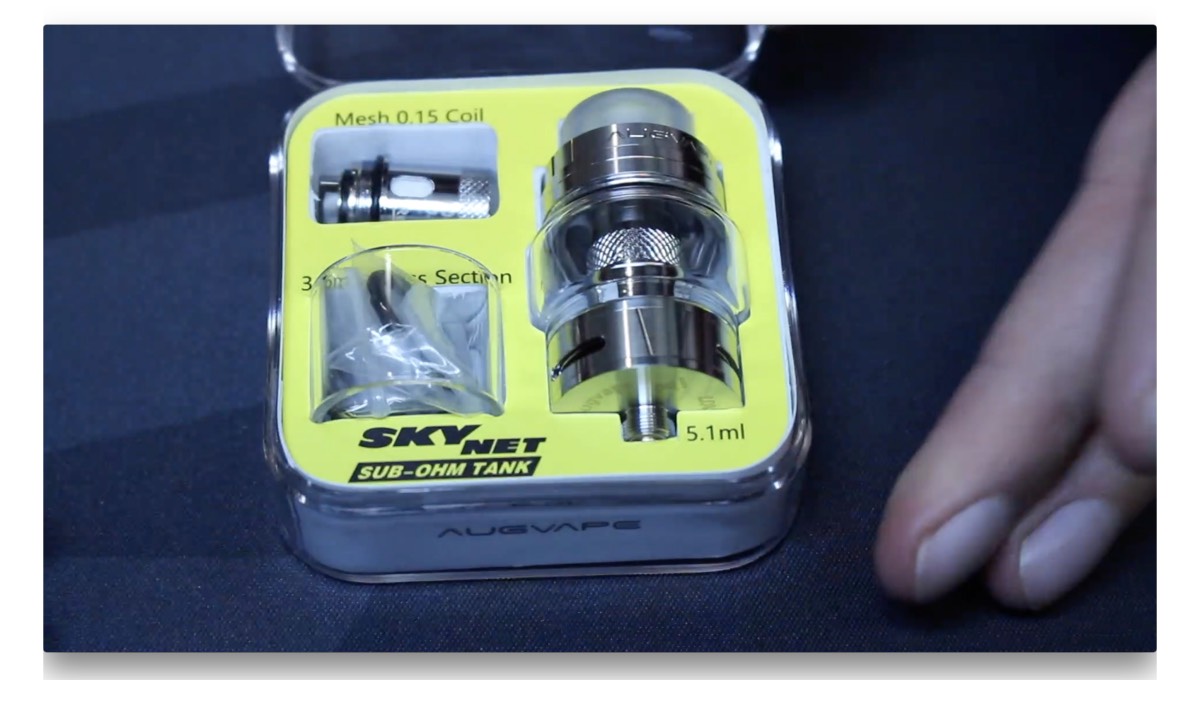 The Skynet Subohm tank was sent to me for review from Augvape. Check it out on their site here. There’s really nothing crazy about the design of the tank. I think it looks like a lot of sub ohm tanks on the market right now, but nothing wrong with that. I think it’s simple and clean. The drip tip is a clear frosted tip. It’s super thick, which seems a little strange to me, but it works great. I don’t know why they made it so thick, but maybe to prevent it from getting hot. Either way, it looks nice, it feels comfortable, and works just fine. It’s held in place with an o-ring on the inside of the top cap. The top cap screws into the chimney section of the device using very big threads, which is the first time I’ve ever seen a company do it this way, so I decided to do a little research on thread pitch and found some interesting pros and cons. So wider pitch threads like this are called coarse threading. Thin, close-together threads are called fine thread, which is what we’re most familiar with.

So there are pros and cons of each. I’d say in this application, it probably doesn’t matter much. From real use, it does seem like it’s less likely to become overtightened and I haven’t had any issues with it loosening up on me, so I think they’ve found a good middle ground here. It works well.

If you chain vape, the top cap can get a little warm, but I’m talking extreme chain vaping. I think I took like 20 hits in a row non-stop before I noticed it.

This is a bottom airflow tank, so it is more likely to leak. I haven’t noticed any issues with leaking at all, but it’s always a possibility with tanks like this.

There are three big adjustable airflow slots on this and with them all wide open, you get a ton of airflow. So this tank was designed with high wattage in mind, although you can close it down for lower wattage vaping too. It is a little noisy, but nothing too crazy. You get two pre-built mesh coils in the box. These are built at 0.15 ohms and are rated for best performance between 60-80 watts. At 60 watts, this to me definitely seems like a good starting point because it’s a satisfying vape with lots of flavor and vapor, but it’s very cool. 80 watts is more my speed and that gives me a much warmer vape, which is what I like. I’ve chain vaped nearly an entirely full tank at 80 watts and I never get a dry hit, so the coils are awesome. One thing I don’t like about the coils is how they are positioned in the base. The wicking holes on the sides of the coil don’t reach to the very bottom of the glass tank, so there’s no way to wick that last bit of remaining juice in the tank. That’s not a big deal if you always refill with the same juice, but I like to use different flavors every time, so I like to vape the tank empty and refill it with something new. I think that’s really about it. The flavor is outstanding, just like you’d expect from a sub-ohm mesh tank. And having the ability to handle such high wattages and offer so much airflow is a nice plus. The only two issues that I could come up with are that the coil wicking holes should be lower and that the airflow is a little loud, but those issues are so minor that I don’t think it’ll matter to most people.

And finally one other big pro on this tank is that most vendors are selling it for around $23 – $25, which I think is very affordable. A pack of five 0.15 ohm mesh coils will set you back around $12, so that’s also pretty cheap.

They also have a pro version of this tank, which they didn’t send me, but that one is 25mm in diameter, holds 7.1ml with the bubble glass, and uses double mesh and triple mesh coils for higher wattage vaping – http://www.augvape.com/product/skynet-pro-sub-ohm-tank/ and most places are selling that for only $1-2 more.

Where To Get It

Here are a couple of places you can get the tank and coils. (affiliate links)