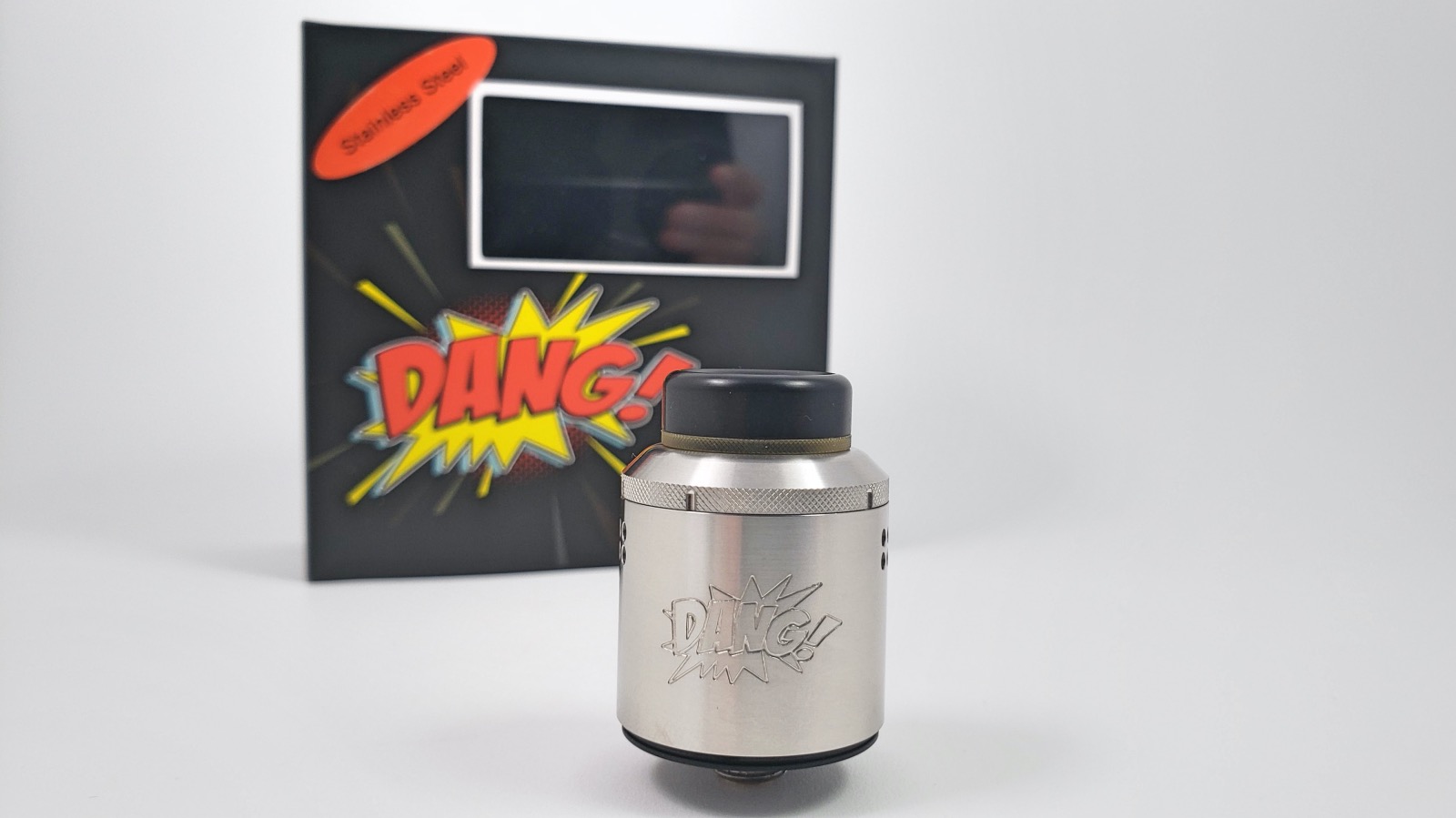 I’m in Grimm Green’s group on Facebook, Namberjuice, and in early November, Duane (OhmBoyOC) mentioned that his new RDA was up for pre-order on RecoilRDA.com. That was the first I’ve ever heard of it, but it looked really cool and Duane posted a 30% off coupon code, so I went for it.

I always read the user manual for everything I use, but I never really talk about it, just because there’s no reason to. But there are some interesting things worth mentioning in this one.

For one, there’s some funny stuff in here, like the quote at the top that says “Haha sucker! You bought our $#[email protected]…Now we’re RICH!!!” and more funny stuff about traveling to Tahiti.

There is also a great call to action to fight for our industry. It says, “The United States Government is trying to ban vaping, please call the Whitehouse at +1 (202) 456-1414 and tell them they shouldn’t do that.” That’s really cool, and I wish all manufacturers would do something like that right now.

And the only other thing I wanted to mention is that you might be wondering who made this RDA since it’s not listed anywhere in the manual or on the packaging. If you look up the customer service address in the manual, I find an address for Augvape. I can’t be certain, but it looks like it’s being manufactured by Augvape, which makes sense since Twisted Messes worked with them recently on the Occula RDA, so he already has a relationship with them. 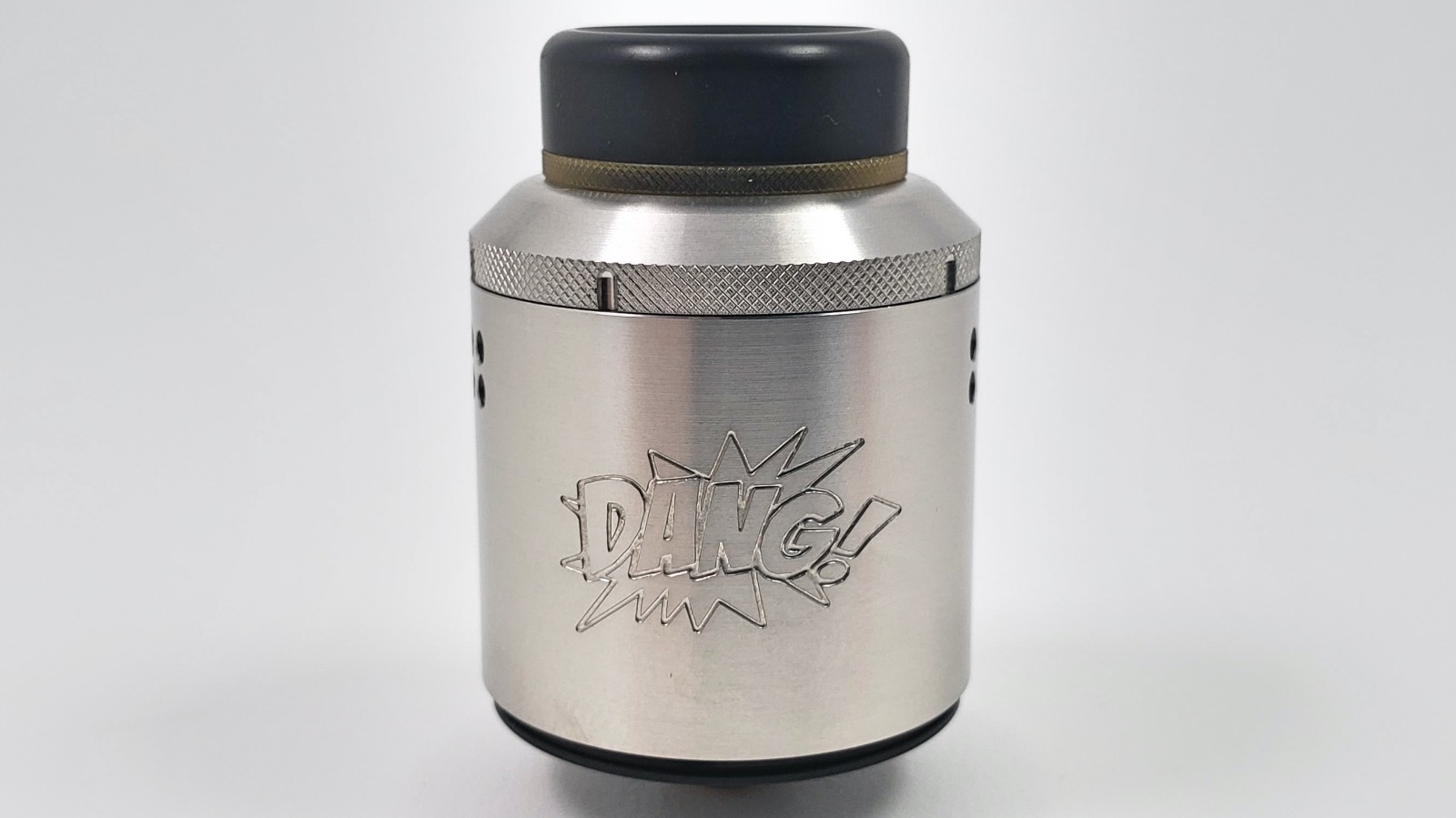 The DANG RDA looks nice. From the outside, it actually looks a whole lot like the Goon 1.5 RDA, except with a honeycomb airflow. The Goon looked great and so does this. You’ll also see the DANG logo etched into one side of the barrel, which I love because that logo is awesome.

The DANG comes out in Black, Stainless Steel, Ultem, and Rainbow. The black is a soft matte color, the stainless steel is a shiny steel, and the rainbow looks matte too, from what I can tell. And that Ultem design is really interesting. I actually really wanted to get that one because it’s so different, but I was worried about how the details would show up on camera, so I went with the stainless steel. But I think that one is really cool. I’m not a big fan of Ultem or anything, but I like really unique styles. 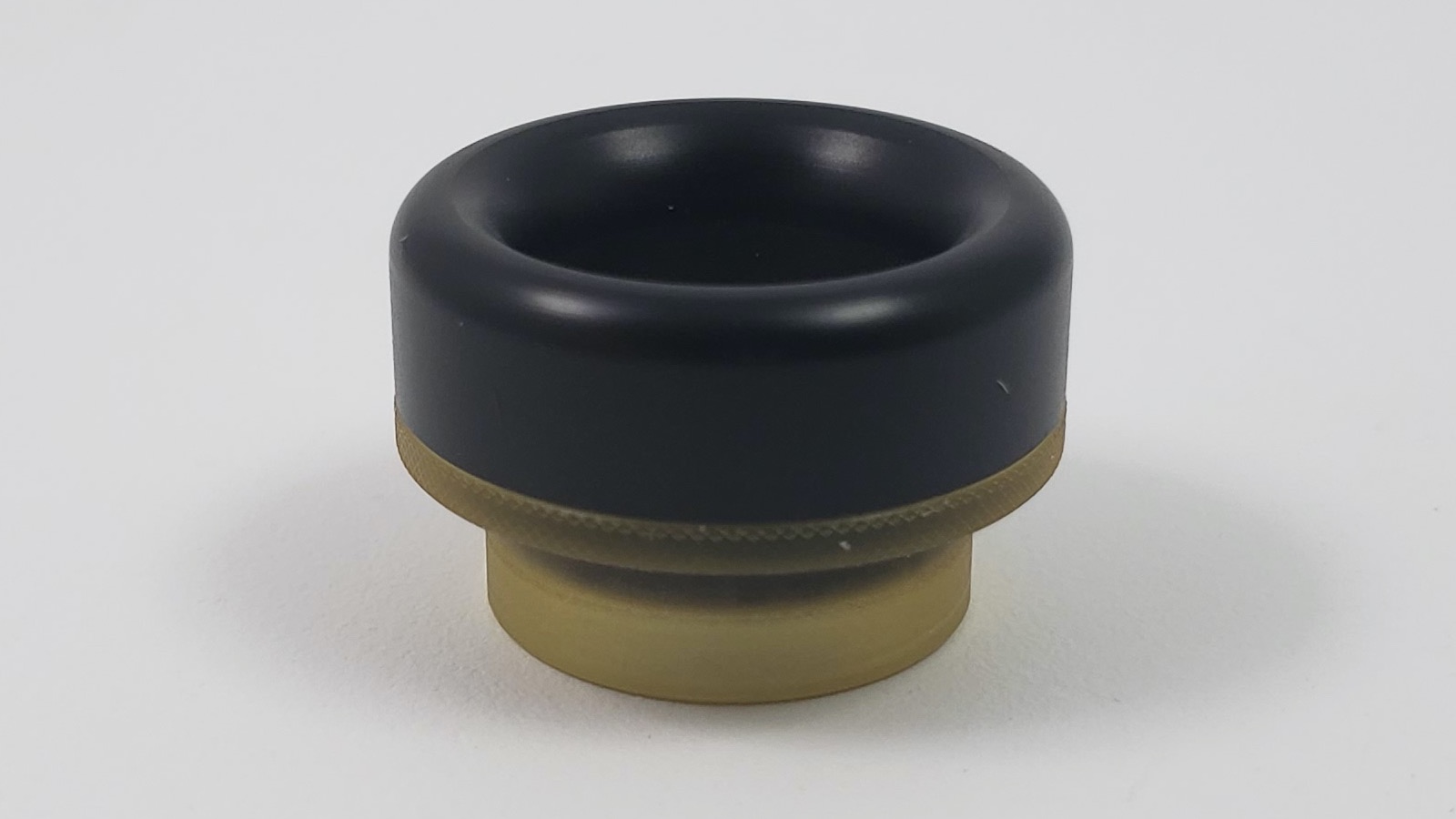 The drip tip is an 810 drip tip, perfect for lots of airflow, and it also has a cool two-layered design to it. On the top is what I believe is black Delrin, and then the lower half, which is just barely visible outside of the atomizer, looks to be Ultem. I think it looks really cool, but it also has high heat resistance with that Ultem, so it’s a cool idea for anyone looking for a hot vape. 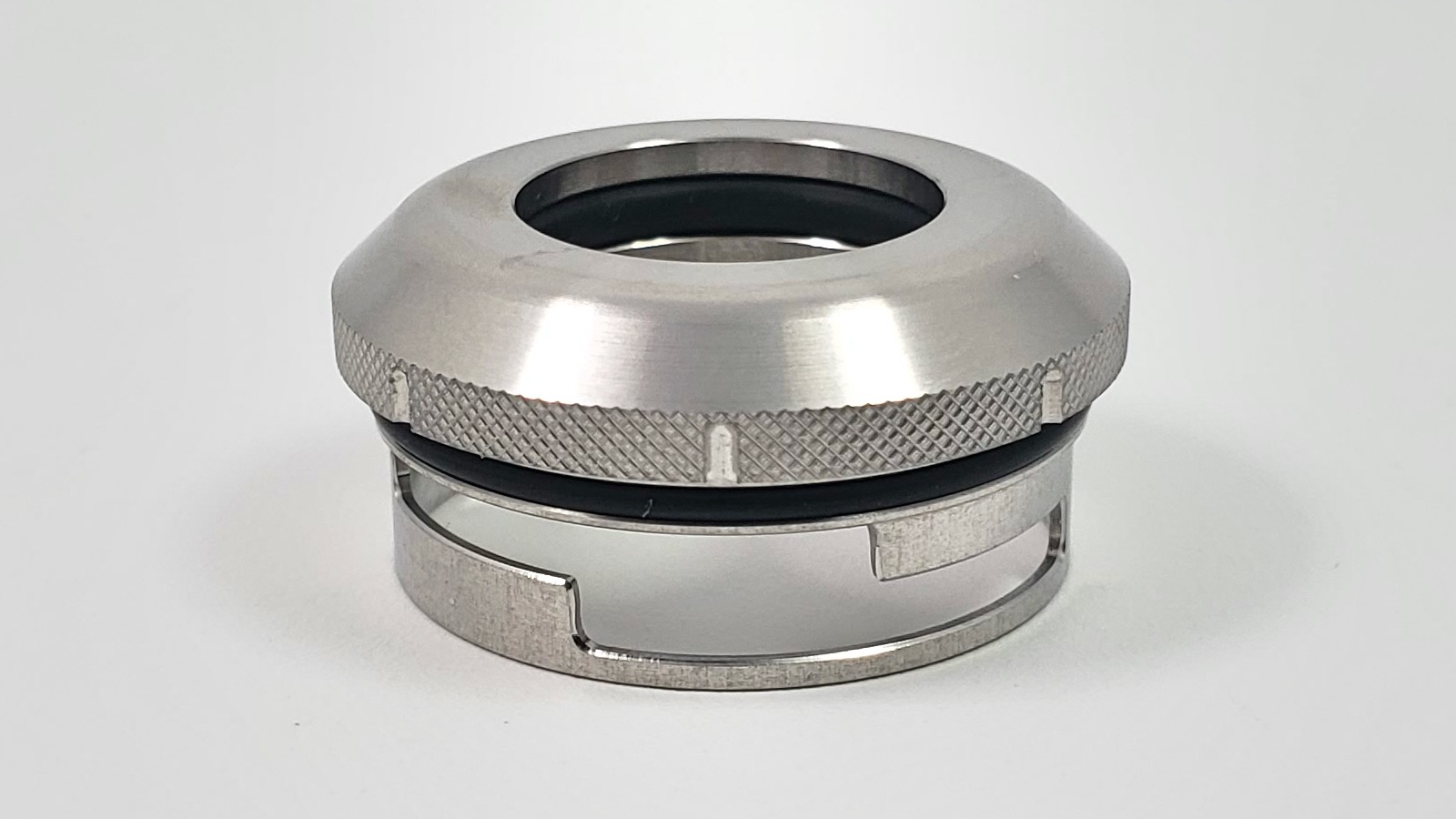 The top cap has some very small knurling on the outside, which helps with grip. And I can actually feel it gripping my skin, so it works. I see knurling on a lot of products that doesn’t work all that well, so this is nice. It doesn’t even really need that knurling though. The top cap is secure in the barrel, but it also turns really smoothly, even when everything is completely dry, so the restriction on the o-ring seems perfect.

On the outside of the top cap are six tiny notches all around the cap. I believe these are designed to indicate when you have the airflow holes perfectly lined up for each airflow setting. There are three settings, so if you turn the top cap to each notch, you can open just the bottom row, just the top row, or open them both. And it’s the same on both sides. Wide open, you get a ton of airflow coming through here. This really lets you get some massive hits on here if you like that. And of course, you can close it off as much as you like from there.

If you pull that top cap off, you can see the stepped airflow slots that let it close off each row. It’s also conical, which we see a lot these days since it creates better flavor. 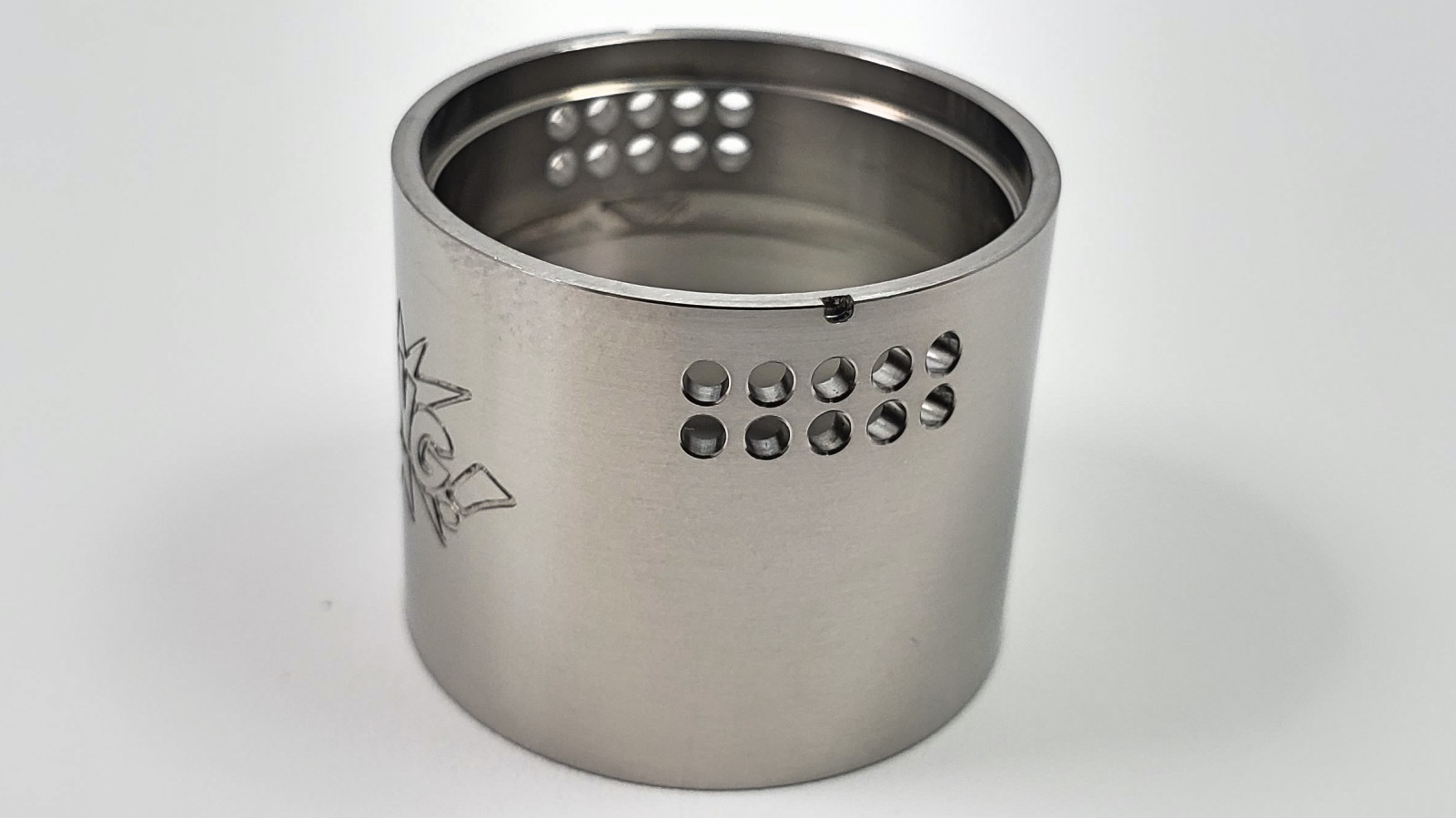 The top of the barrel has this smaller inner wall that the top cap fits right into. I think this is one of the reasons why the top cap works so well. It lets the top cap snap into place, sit snugly, but also move smoothly. It’s the little details!

The barrel has a honeycomb airflow, with 10 holes on each side, so 20 airflow holes in all. Honeycomb tends to have smoother and less turbulent airflow, and in this case, it seems to work well. The airflow is smooth.

When you look at the inside of the barrel from the bottom, you can see that the inner barrel gets smaller about halfway through. I don’t know the purpose, but I’m assuming it’s to direct the airflow. 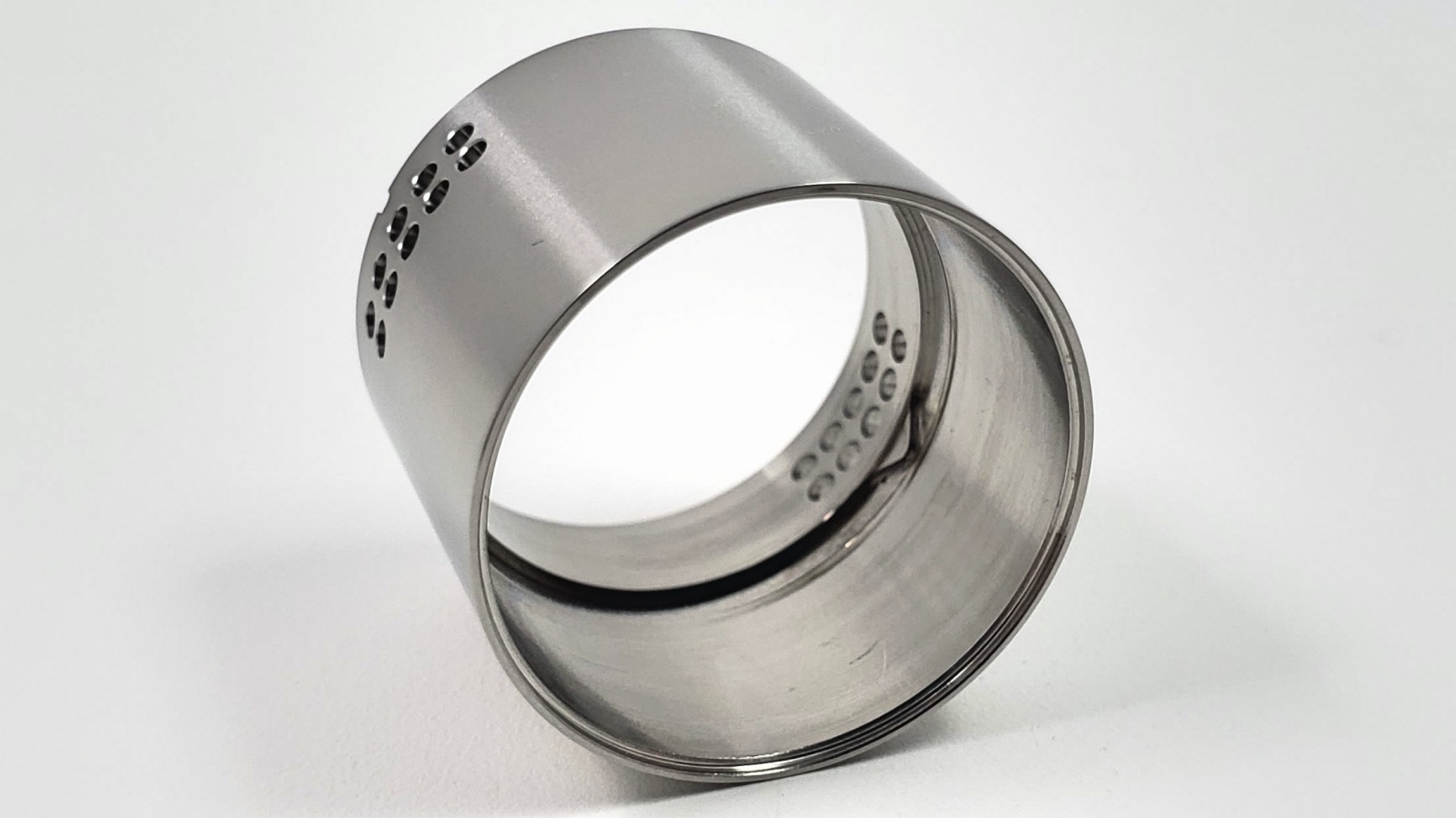 These fit into slots on the deck and lets the barrel lock into place, which is always nice for preventing the barrel from spinning around when you’re trying to take the atomizer off of a device.

The o-rings on the deck are much more restricted than the one on the top cap and when it’s dry, it’s hard to get the barrel on. So you’ll probably have to add just a tiny bit of e-liquid to it to make it move easily. I really mean just a tiny bit though. I only rubbed a small part of the inside of the barrel on the wick and that’s all it needed. Moves super smooth now. These will probably loosen up really nice after more use. 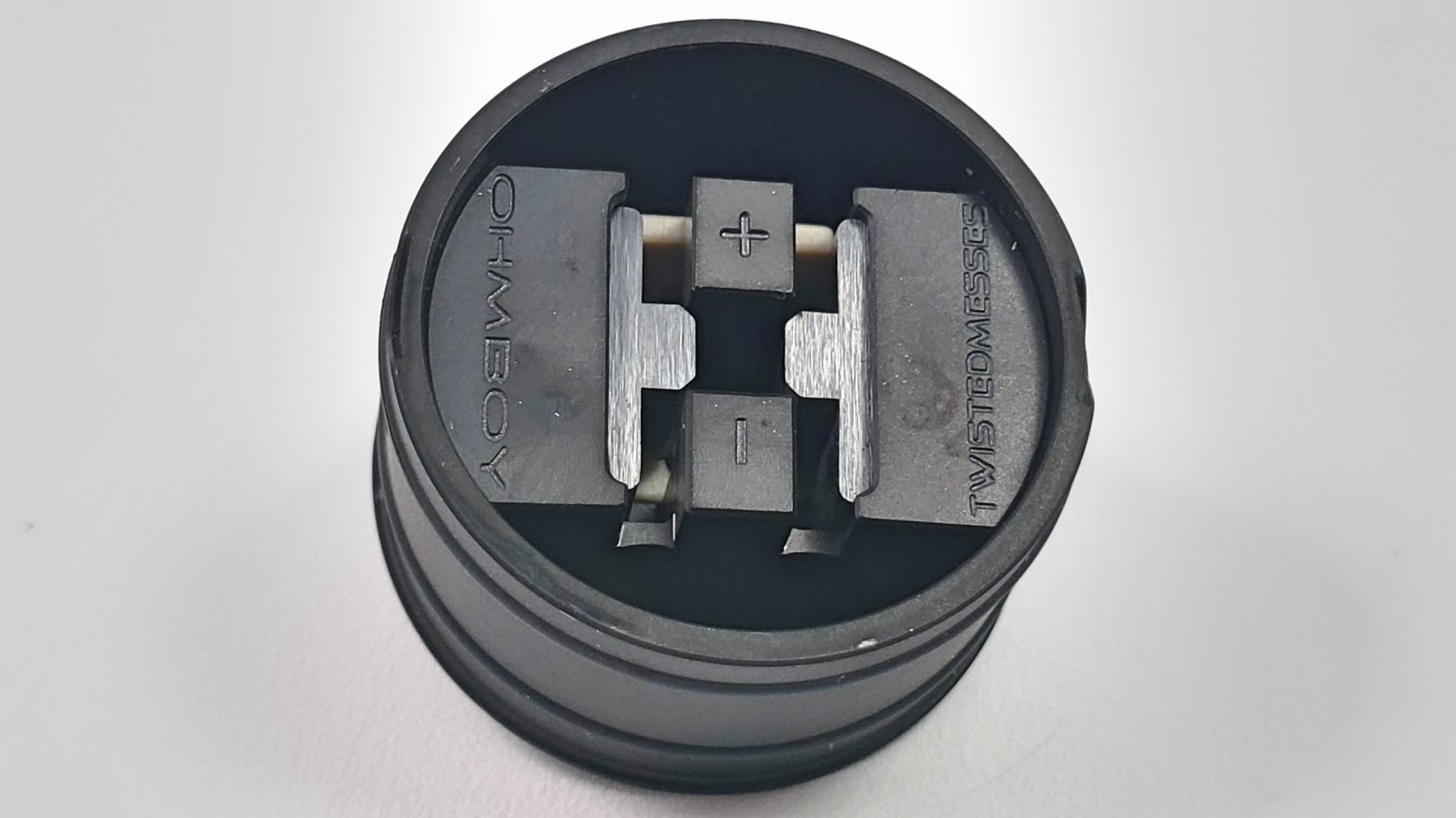 Ok, now here’s one of the coolest things about the DANG RDA – the deck.

They say this is the first postless clamp style deck. There are no posts here, so you just drop the coils down and clamp them into place. And the clamps grip really well and they move smoothly. They open up really wide too, so you can fit some big coils in here. This is one of the easiest decks I’ve ever built. Once you have your coil legs cut to the right length, it literally takes like 30 seconds to put the coils in and positioned. It’s so easy. 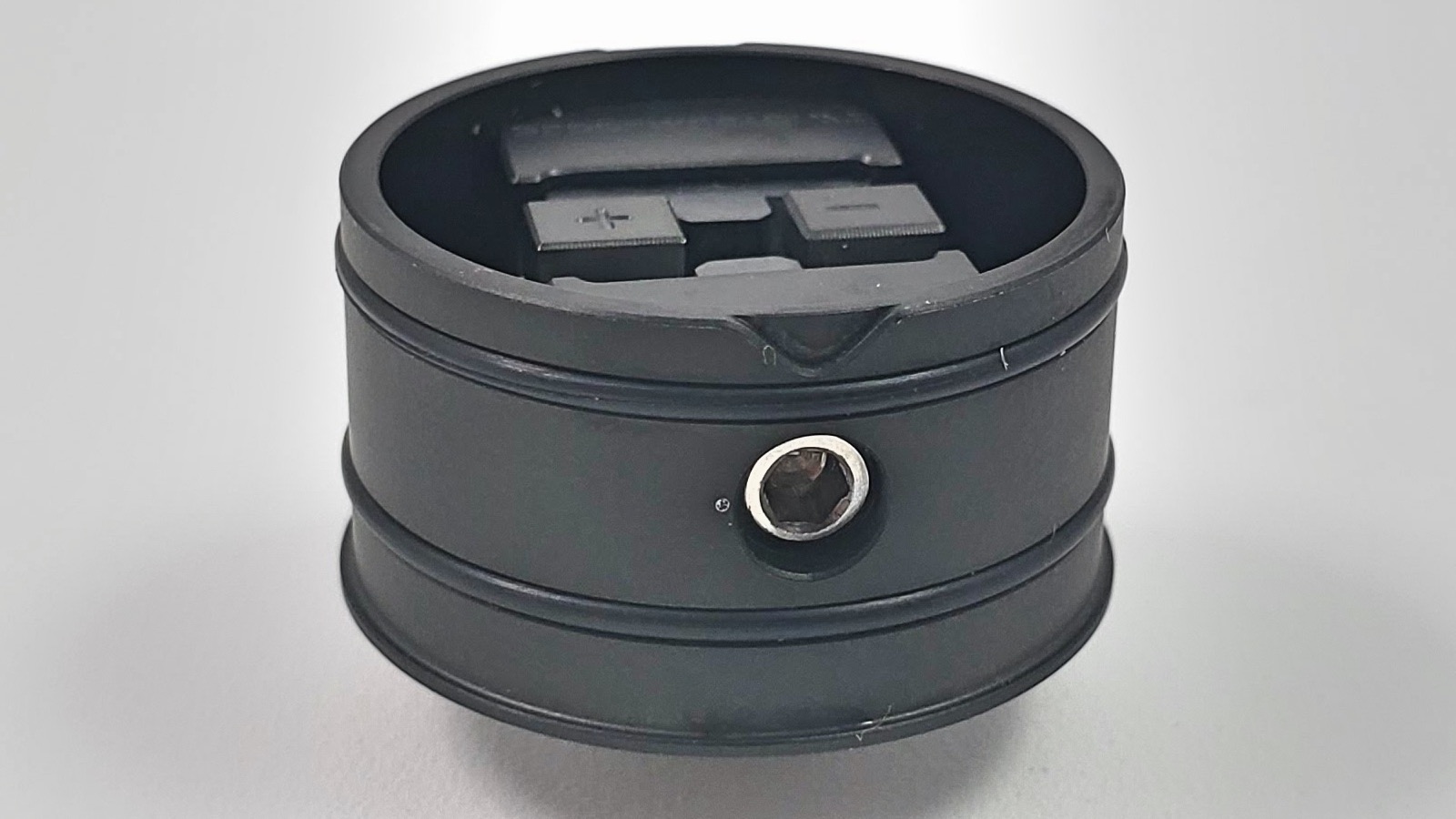 One interesting thing is that they used larger-than-typical hex screws to tighten the clamps. So if you have a drawer full of vape hex wrenches, they’re probably going to be too small. So you’ll need to save the included t-screwdriver for this RDA.

The deck walls are also really tall. This gives the deck a super deep 11mm e-liquid well, so it can hold plenty of liquid for an RDA. That’s always nice too.

The coil section of the deck is 7mm deep, so that’s about how long your coil legs can be. If you have a coil cutting tool like the tools that Augvape and Wotofo include in a lot of their devices these days, it makes cutting to the right length really easy. For example, I used the tool from the Augvape Intake Dual RTA, which is set at 6mm. It worked perfectly. 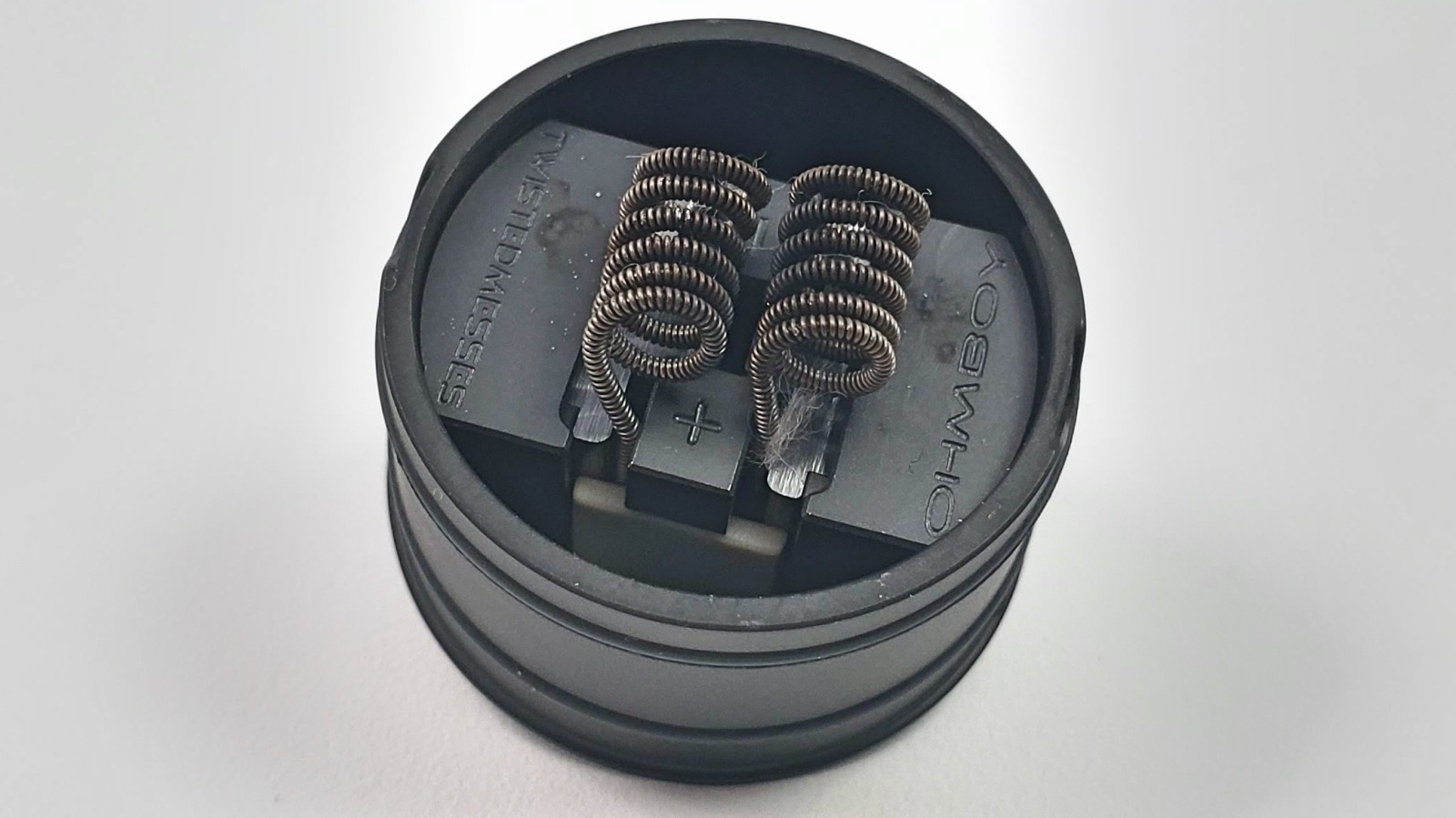 Then to wick it, just make the cotton somewhat tight in the coils and cut the length somewhere around 5mm past the outer edge of the deck. At least that’s where I cut it, which worked well for me. I think what you want to do is probably have it so that the ends just reach the bottom of the deck and it’s not all piled up in there and has issues with wicking.

As for flavor production, the flavor is very good. It doesn’t seem to be muted in any way and I have no complaints at all about that. I think as long as you have your coils position at the airflow holes, you should be able to get some great flavor. I played around with the height of the coils and for me, it seems like the closer they are to the deck, the better the flavor was. As I moved them above the airflow holes, the flavor became less, but the differences were so minuscule that it could just be in my head. 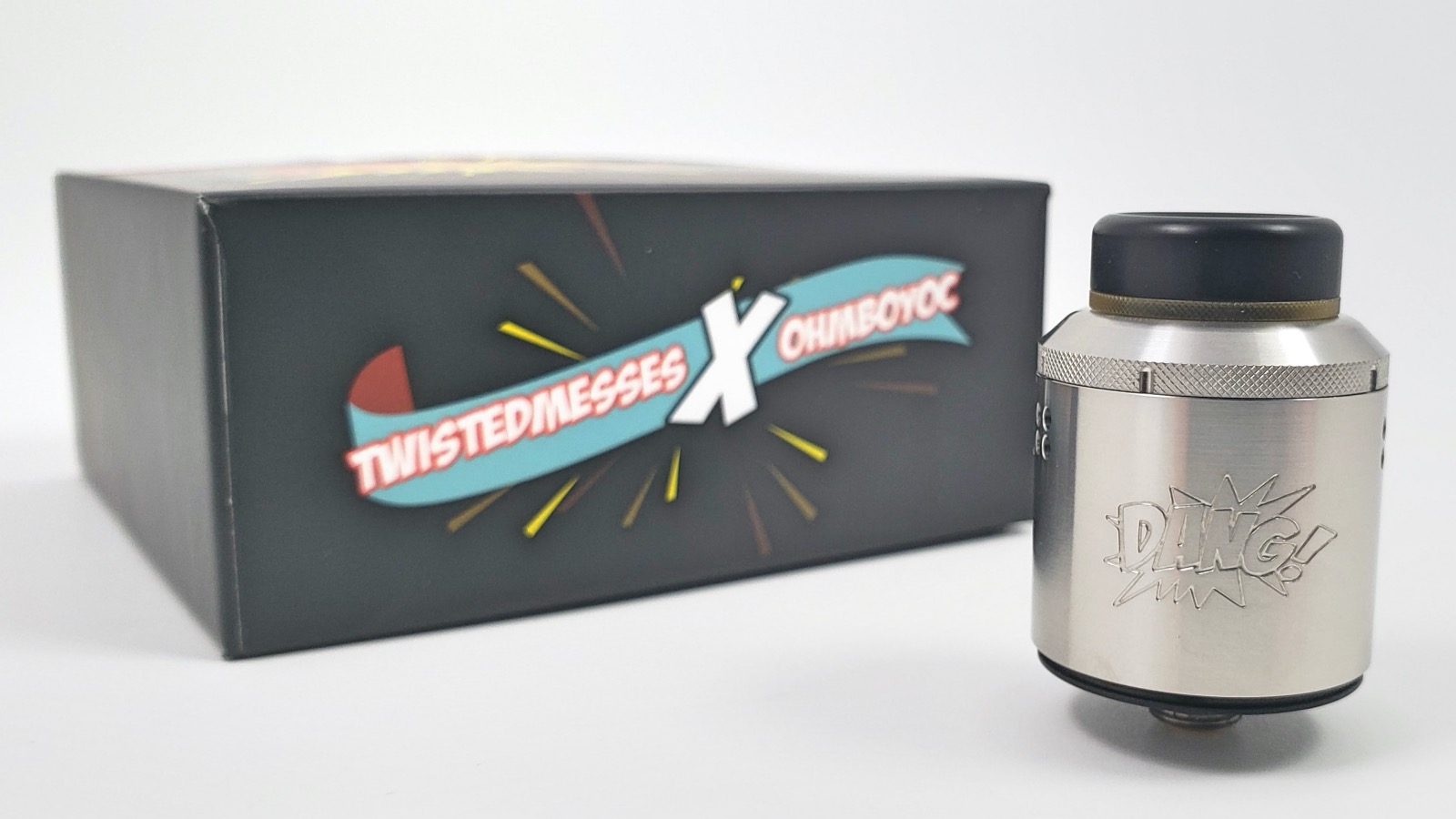 That’s really it for the DANG RDA. The flavor is great, it has a ton of airflow if you want it, the airflow is smooth, the little details they’ve added actually make a difference, and the deck is definitely the easiest deck I’ve ever built on. This is a great RDA.

Ok, that’s it. I purchased this myself, so this isn’t sponsored in any way. You can get the DANG RDA from RecoilRDA.com for $60 or check out the Namberjuice Facebook group and see if they’re running any coupon codes.