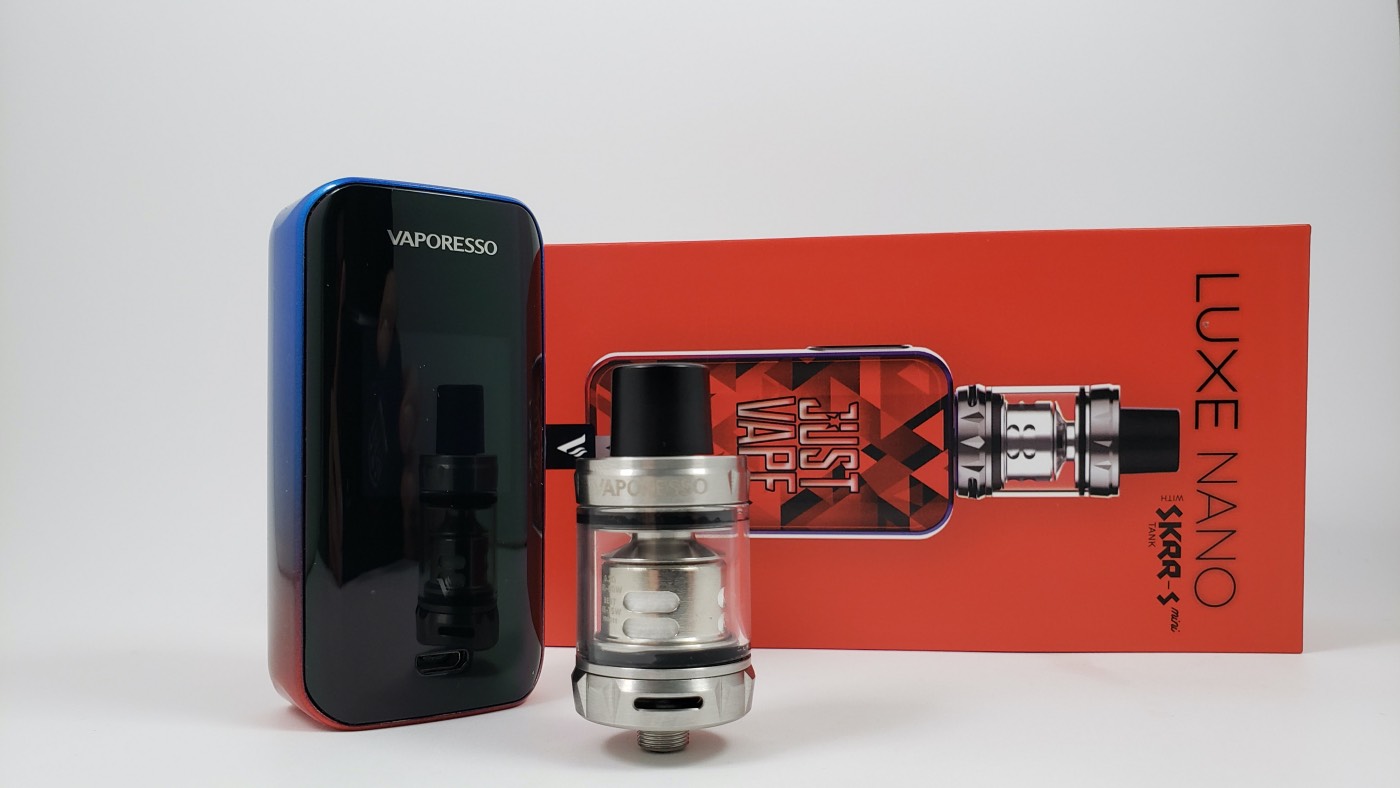 The Luxe Nano kit was sent to me for review from Vaporesso. This is a smaller version of the Luxe S kit and is very similar in a lot of ways. The main differences are that it’s smaller, has an internal battery, and it pushes a max of 80 watts. The Luxe Nano is a great looking device. The body comes in six different colors, each color with its own specially designed back panel, and on the front is a sleek edge-to-edge black LED screen and a micro USB port. The screen is a 1.3″ touch-responsive color screen that looks great and is nice and bright in the sun. The screen shows plenty of details. There’s a battery life indicator, a clock, the mode you’re in, the wattage or temperature it’s set at, the resistance of the atomizer, the voltage, the puff counter, and puff duration timer.

Five clicks on the firing button turn it on and off. It’s a big clicky button that takes up a third of the size of the device, which makes it really easy to access and use.
Just like the Luxe S, the Luxe Nano also has responsive touch-based setting buttons on the screen. These work great and vibrate to let you know that you’ve hit them. And to prevent accidentally touching the buttons, the screen locks after a few seconds. It’s a little annoying having to unlock it all the time, but you really need that to prevent changing settings on the touch buttons.

The Luxe Nano uses the same 4.2 version of the OMNI board as the Luxe S. That means it has all the same features and firing speed. The only difference in features that Vaporesso made is that it’s capped at a max of 80 watts.

To change modes and settings, click the Vaporesso logo on the screen, right between the two up and down buttons. That will give you several options to pick from. Variable Wattage – This is your typical wattage mode. You can also adjust this mode to have a soft, normal, or hard ramp up.

Super Player – This mode lets you expand the range of resistance that the device supports. If you turn it on, you can run an atomizer built as low as 0.03 ohm or as high as 5.0 ohm.

Variable Voltage – This lets you adjust the power of the device using voltage instead of wattage.

Custom Curves – This lets you specify the wattage or temperature for each second of your hit, up to the max of 10 seconds.

Bypass Mode – This lets you run the device in unregulated mode.

DIY Mode – This lets you customize the functions of the variable wattage, variable temperature, and custom curves modes.

Settings – Here you can reset everything to default, set the time, adjust the brightness of the screen, reset your puff counter, turn off and on the smart mode (which auto sets wattage based on the resistance), set the auto on/off setting, set your screen timeout, adjust the key light brightness, and turn on or off the vibration feature. The Luxe Nano has a built-in internal 2500mAh battery inside. It’s a big battery for a little device. The device charges with a micro USB cable and the Luxe Nano also has passthrough charging, so you can vape it while it’s plugged in. This is the 23mm, 3.5ml mini version of the Skrr-S tank, which Vaporesso includes in quite a few of their different kits. I’ve reviewed the Skrr-S before which I really liked so I would expect this to perform just as well. One issue I had with this tank was taking it apart. I just couldn’t get it apart. I think it’s because the glass got stuck to the seals on both ends, so it just wouldn’t release. I ended up putting needle-nose pliers into the fill port to use as leverage to open it up from the top. But once I got it open, it was fine taking it apart again later.

The drip tip is your standard 510 drip tip. It’s removable, so you can use your own tip if you’d like. The top cap twists off and gives you access to a single fill port, which is a nice size so it’s easy to fill. The Skrr-S Mini is compatible with two different coil heads; a 0.15-ohm strip coil and a 0.2-ohm mesh coil, both made with flax fiber and cotton. Vaporesso designed these as bullet-shaped coils to provide better control of the airflow and also to prevent spit back from coming up through the drip tip. As far as spit back prevention goes, it works great.

QF Meshed Coil – This is a 0.2-ohm coil also designed to be fired between 50-80 watts and performs best between 65-75 watts. This coil is designed for amazing flavor, according to Vaporesso and yeah, it has very good flavor. It performs every bit as good as the strip coil and has even more flavor. It’s a great coil head. The airflow is built into the base of the tank. The adjustment ring moves smoothly and gives you access to three small airflow slots. You can open it up wide enough to get a big hit or you can close it down as tight as you want for a restricted hit. But this tank is designed for bigger hits, so you’ll probably find this more satisfying with the airflow opened up. You get a lot of airflow through here too.

The base of the tank has been redesigned from previous versions and Vaporesso says that it has leak protection. I haven’t had any issues with leaking so it seems to work.

My one complaint about the airflow is that it’s pretty loud and a little turbulent, even a little whistle-y. This is a great setup that I really enjoy using. It looks great, has a ton of features, it’s easy to use, it’s small and it’s powerful. The tank works great as well. The only thing to keep in mind is that if you’re vaping this at 80 watts, the battery will die much faster and the tank will drain super-quick. A 3.5ml tank with a mesh coil at 80 watts just sucks down liquid. But that’s expected. The main draw here is that this thing is a small and powerful device. Overall, I really like it.

This was sent to me for review from Vaporesso and you get it from Vaporesso.com for around $90 for the full kit including both the device and tank.