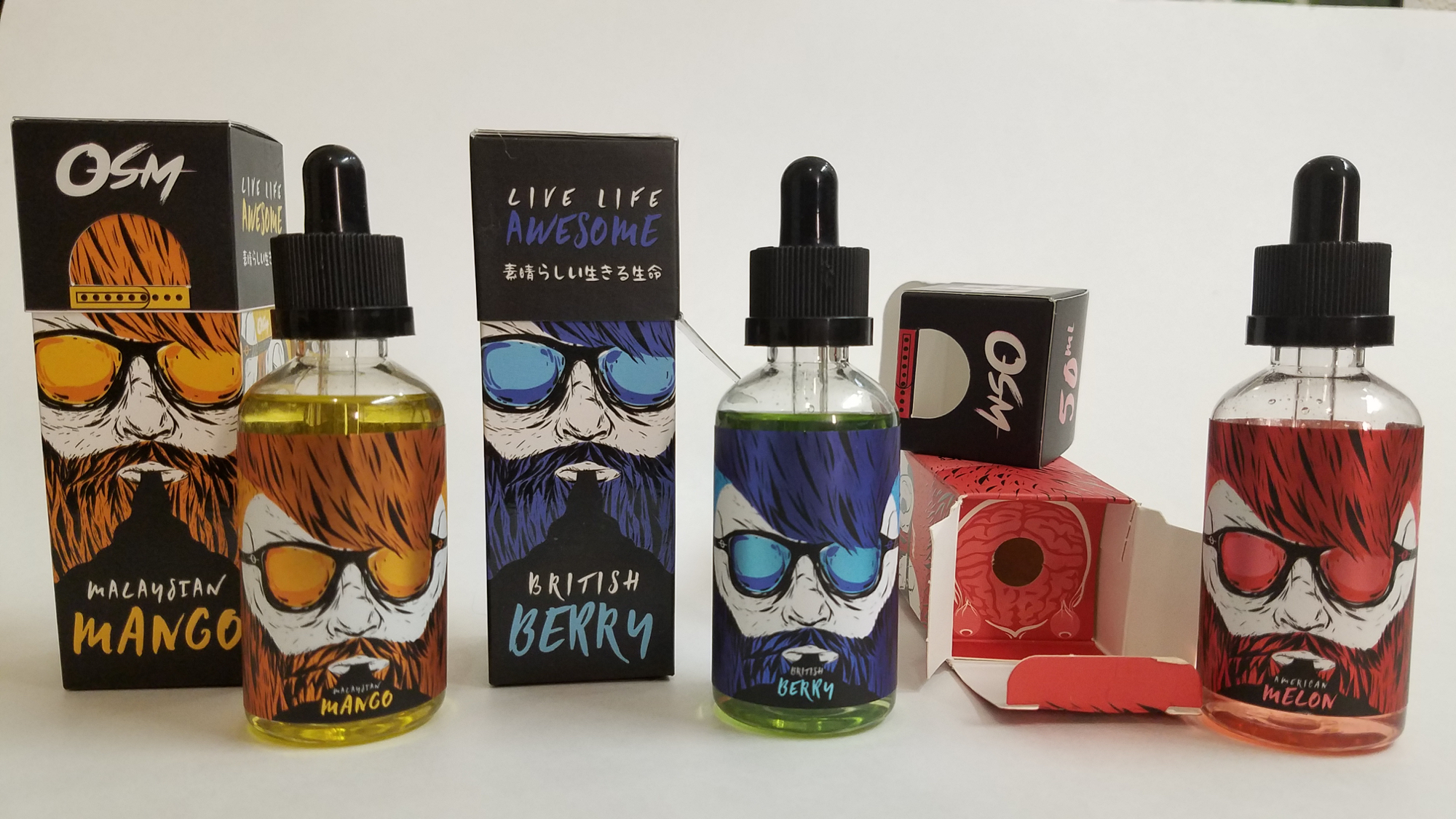 Flavahub is a company out of Malaysia who makes several lines of e-juice. They reached out to me to see if I would review their Ossem Juice line (pronounced “awesome”), which is a fruit-based line with a koolada kick. If you don’t know what koolada is, it’s kind of like menthol but with less of the menthol taste. It provides more of the sensation of menthol, rather than modifying the flavor much.

You can get Ossem Juice from FlavaHub.com or OssemJuice.com in 50ml bottles for $20.99. All of the e-juices in this line are 30pg/70vg and you can get it nicotine strengths of 0, 3, and 6mg.

Let’s take a look at each flavor they sent me.

“British Berry is an extraordinary juice that is carefully blended to perfection giving it the taste that you will never forget. The taste of berry will burst inside your mouth with a wonderful sensation making you crave for more and more. This fabulous juice should be your daily companion every time you need a refreshing boost!”

This is supposed to taste like berries but it doesn’t taste like what I’d expect. I have no idea what this tastes like. It tastes like a fruit of some kind, but I don’t know what it is. It seems exotic, or at least not a type of fruit that’s common here in the U.S. The only way I can think of to describe it is that it reminds me of the unique taste of something like Mango or Papaya.

This has Koolada added, so it has a minty/menthol taste, and it’s pretty strong, but it’s not too strong. It’s not a flavor I’m familiar with, but I like it.

“Enjoy this delicious Malaysian Mango, passionately brewed to create this magnificent flavor! This luscious juice, without doubt, will captivate your taste buds on every puff, leaving you a great pleasure. You will definitely be delighted with this velvety smooth juice till the last drop! Ossem!”

This one also has Koolada, so it’s a little minty, but it’s not strong at all. The cooling sensation seems to work really well here. This one is really good. I can taste the mango, but it’s not overpowering. It actually tastes like a mix of mango and pineapple, even though they don’t mention pineapple in the description.

I used to make a lot of dried fruit in a dehydrator, and this reminds me exactly of dehydrated pineapple.

This e-juice is sweet, but it’s not extremely sweet. It almost seems like it doesn’t even have a sweetener added at all but just has the natural sweetener of the concentrate. I don’t know if that’s true or not, but that’s what it seems like to me. Except for the Koolada, the flavor tastes very natural. This one is really good. I like it a lot.

“The juicy and aromatic red American Melon bursting in your mouth will leave you craving for more and more. Enjoy the sweet and succulent taste of the ripest watermelon carefully blended to make up this masterpiece. We definitely recommend you to try this awesome flavor!”

The first note I get is natural watermelon. It tastes like a very authentic watermelon flavor to me except that it has a little earthiness to it, sorta like it has a bit of rind. The rind isn’t bad though. Sometimes the earthiness comes out a little strong, which I don’t like, but most of the time it’s barely noticeable.

This one also has koolada, but it’s not strong. This one seems to have the least amount of Koolada out of all of them.

This is another one that I like, although I think the flavor could use some fine-tuning, especially because of that earthiness taste. I’m sure that earthiness will turn some people off, but most of the time it’s not bad.

What’s really interesting about these flavors is the Koolada that they’ve added. It doesn’t have nicotine, but it gives it a throat hit that makes it satisfying as if it has nicotine. I don’t even need the nicotine to make it satisfying. This is an e-juice that I might keep on vaping without ever adding nicotine.

The flavors all tasted like natural fruit, without a bunch of sweeteners added. It has Koolada, so if you don’t like that menthol / minty sensation, you might not like it, but I think it works very well in all of these flavors.

This was a really good line. I wasn’t a big fan of Flavahub’s “Fantastic” line, which also uses Koolada, but this line doesn’t have such an overwhelming minty flavor and the flavors were pretty good.