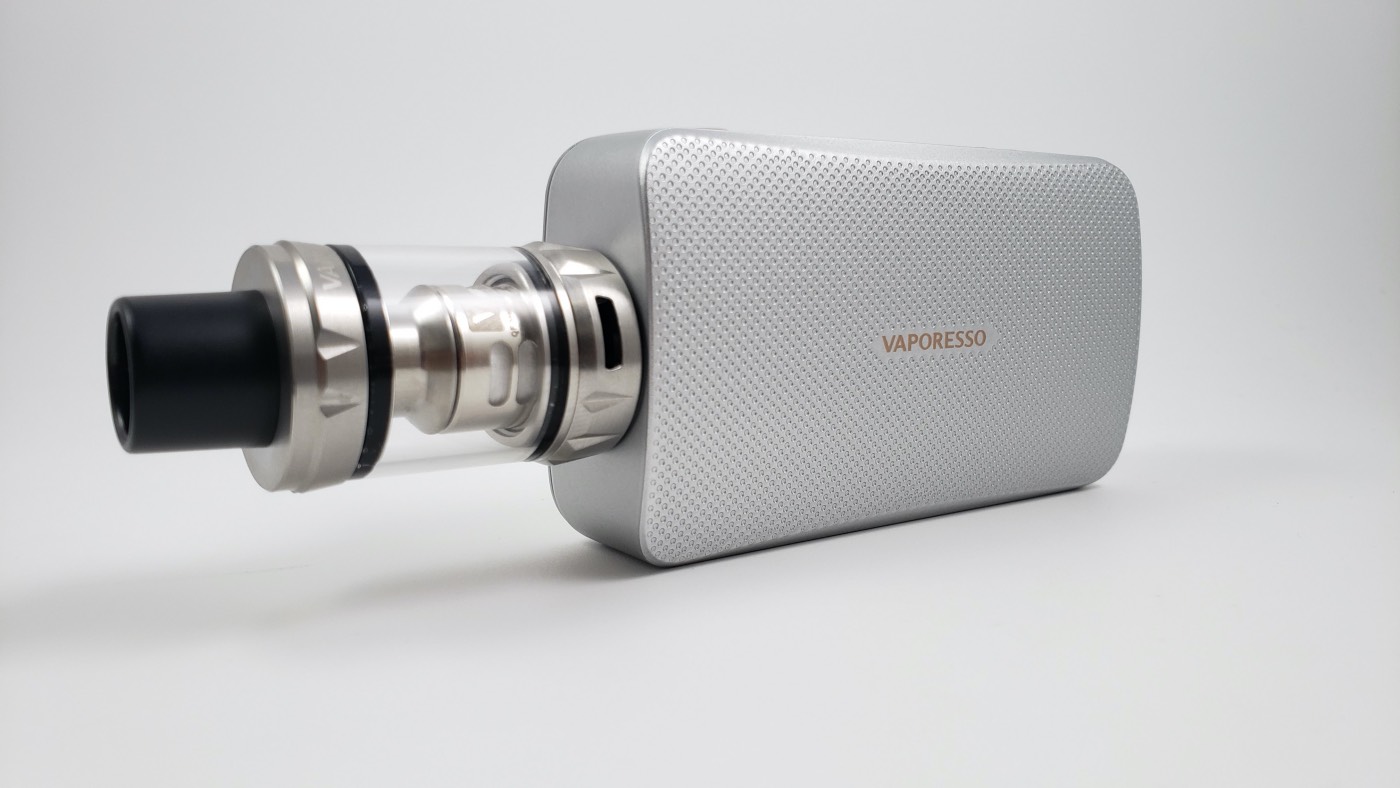 The Vaporesso Gen and Skrr-S kit was sent to me for review from Vaporesso (check it out here). This is an awesome high-wattage dual battery device paired with a decent sub-ohm tank. 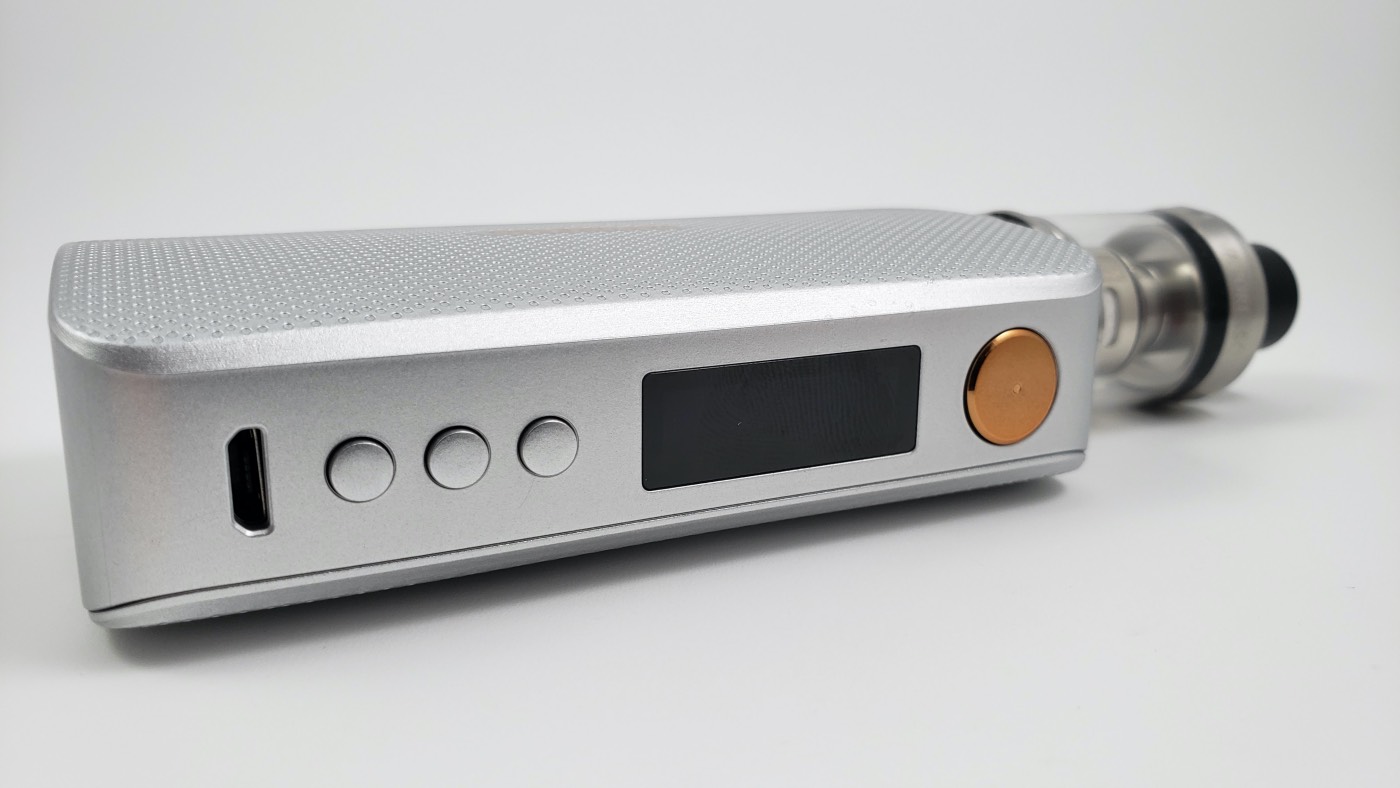 There something about the design of the Vaporesso Gen that makes me think high-end. It’s not a high-end, limited edition product, but it sure looks like one. It’s sleek and classy.

The soft rubber casing makes the feel of the Gen really nice too. Vaporesso says it’s created with four layers of coating to give it a soft and smooth feel. And what’s really nice is that the final layer is a protective coating that makes the device resistant to scratches and flame. It’s super durable. 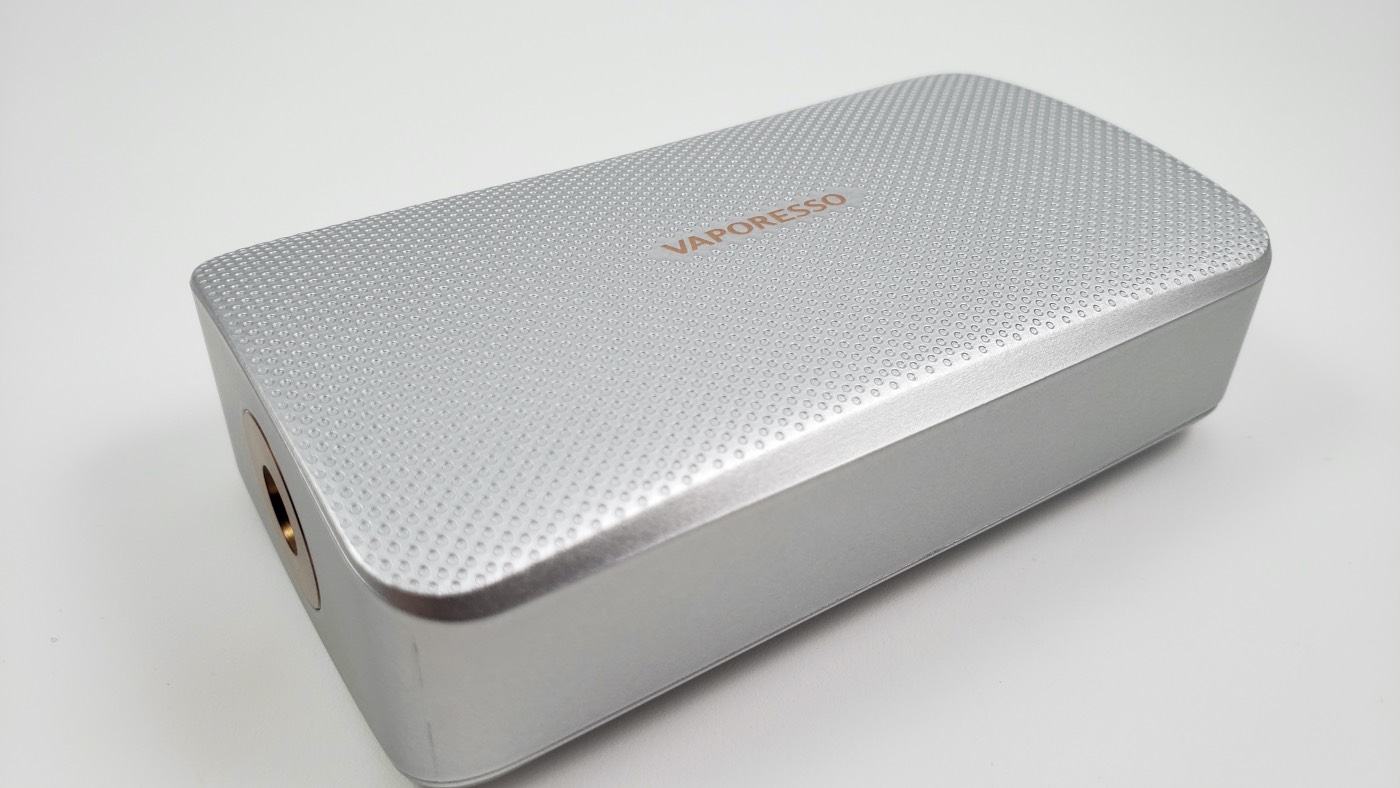 One of the features that Vaporesso promotes is that this is a 220-watt device that weighs only 107g without batteries inside. That’s probably hard to put into perspective unless you weigh things for a living. It’s 3.7 oz, so it’s about as heavy as a 1/4 lb hamburger patty. Does that help? Ok, I’ll just say that it’s pretty light. 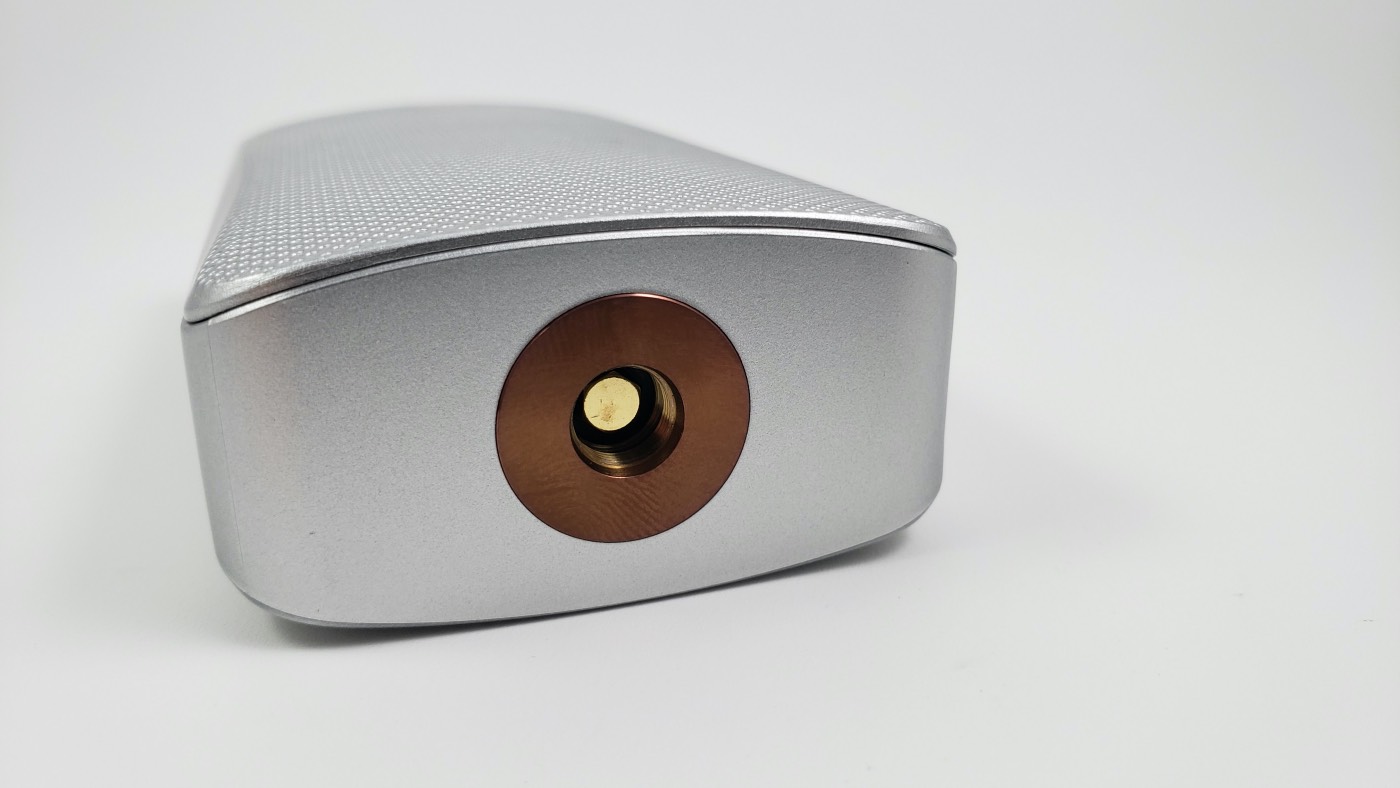 On the front of the device are a nice fire button, a 0.91″ OLED screen, and up and down button, a mode button, and a micro USB port.

The screen shows your battery charge, the resistance of your atomizer, puff duration, your wattage or temperature, and whether or not you’re in Pulse mode.

Vaporesso has created a new chip for the Gen called the AXON. Honestly, that really doesn’t mean a whole to me but Vaporesso has had some excellent chips in the past, for example, the OMNI board in the Revenger mod, so I trusted that this new chip would be an improvement.

You might not notice some of the things going on with this chip while you’re vaping, but you’ll definitely realize that you’re getting great performance out of it.

One of the new features of the AXON chip is that it has a pulse mode that fires up to 500 times in one puff by pulsing every 0.02 seconds. This is designed to give you consistent power throughout the entire hit. I actually find this really strange because this is a feature that was needed with devices two or three years ago, but not really today. Years ago, devices would have a significant drop in power over the duration of a hit, especially at higher wattages. So pulsing was used to prevent it. But the chips in devices have improved drastically since then and I don’t think most chips even use that technology anymore. Anyway, it’s a feature on the Gen. 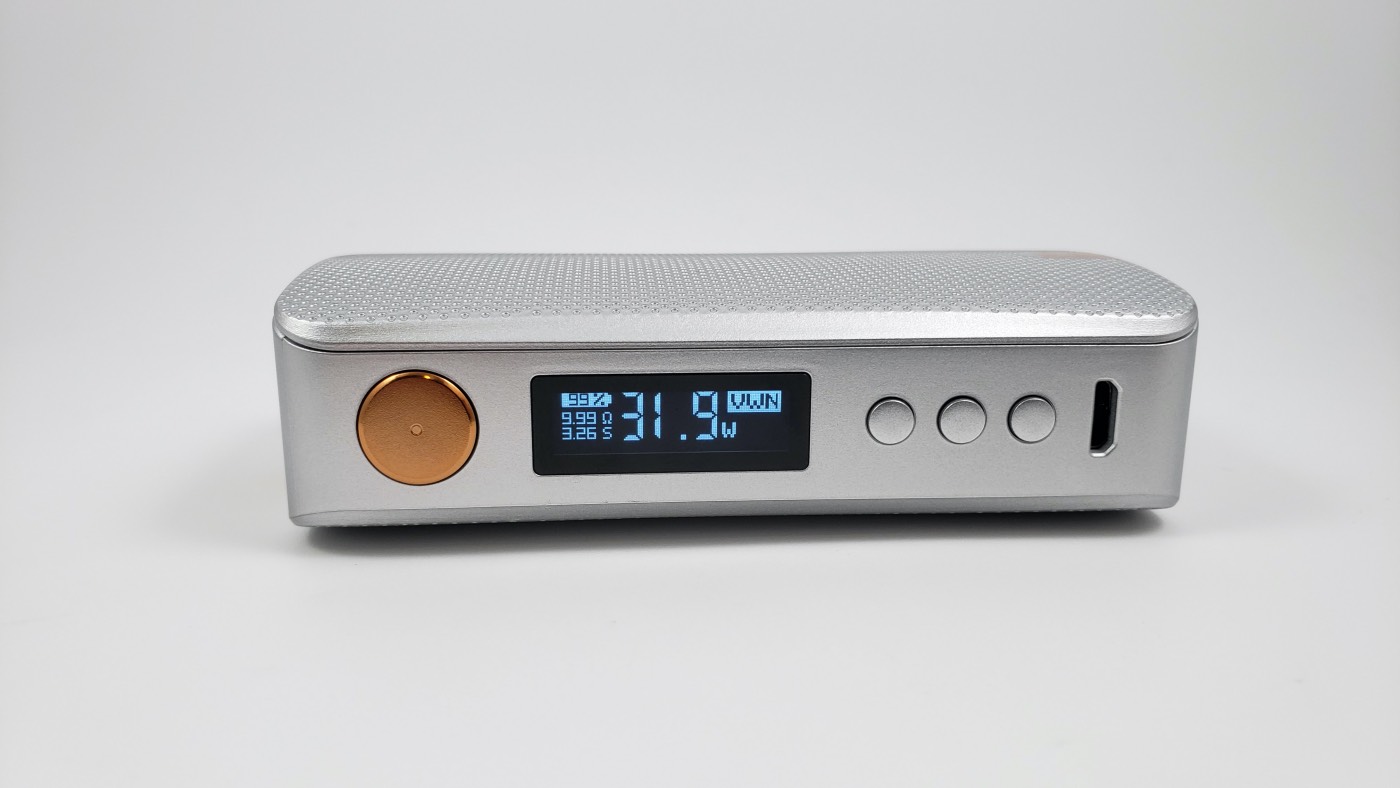 Like most devices, five clicks turns it off and on.

If you click the fire button three times while the device is on, you’ll lock the device settings but you can still fire it.

If you hold the fire button and middle button, you’ll see the firmware version you’re running.

Pulse Mode – This uses a pulse fire to keep you at a consistent power through your entire hit, but this mostly works like your typical wattage mode.

Power ECO – This mode is supposed to help you save battery life once you get down to 40% charge. I don’t know how well it works though I haven’t noticed a change whether it’s on or off.

Smart TC – This is designed to detect the wire you’re using and know how to fire it based on that. To lock your resistance in this mode, you hold the up and middle button for a couple of seconds.

DIY Mode – Here’s where you find the modes that you normally have on most other devices. I have no idea why it’s buried in the menu system, but anyway, you have variable wattage (with Soft, Normal, or Hard ramp-up), variable temperature (with presets for SS, NI, and TI. You can also adjust TCR and wattage once you select a wire), Variable Voltage, CCW for custom curves (this lets you adjust the wattage for each second of your hit), Bypass mode to use the device kind of like a mech mod, and finally Super Player mode which is designed to support a wider range of resistances – so 0.03 to 5.0ohm.

System Settings – There isn’t much here, but you can see or reset your puff counter, adjust screen brightness, turn off or on the Smart Variable Wattage feature, flip the screen, auto eco mode for battery life, and the option to reset the device to factory default.

Another interesting feature of the Gen is that it can detect whether or not you’re using temperature control wire or not. If you’re in TC mode and use a non-TC wire, it’ll take you out of TC mode. And if you’re in regular wattage mode and use a TC-compatible wire, the device will detect it and will ask if you want to use TC. It’s really smart. 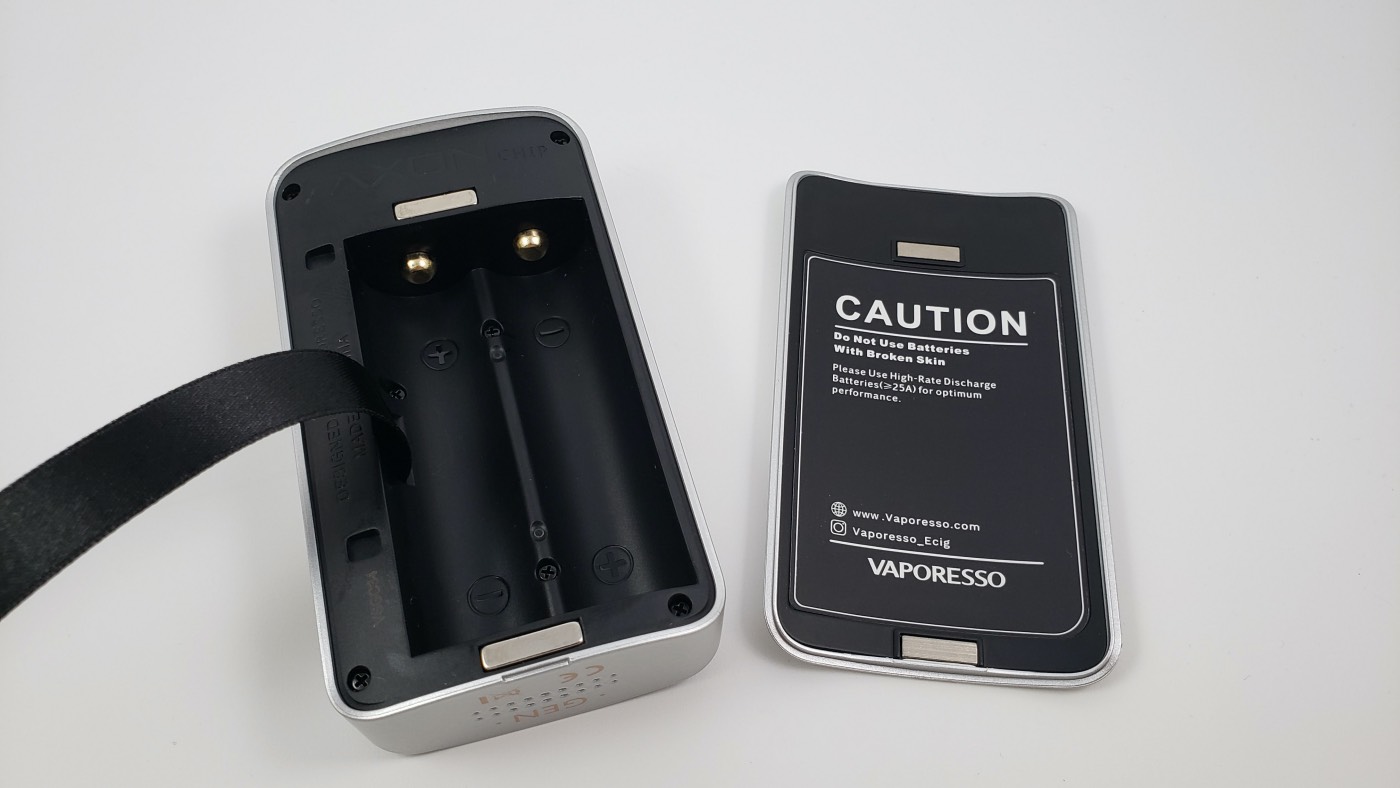 The Gen takes two 18650 batteries. Just pop them into the battery sled and you’re good to go.

You can charge the batteries directly in the device via micro USB, but I always recommend using an external charger since they’re safer. But you do have that option if you need it and the screen will show you the charge of both batteries.

You can also vape the device while it’s charging if you need to. 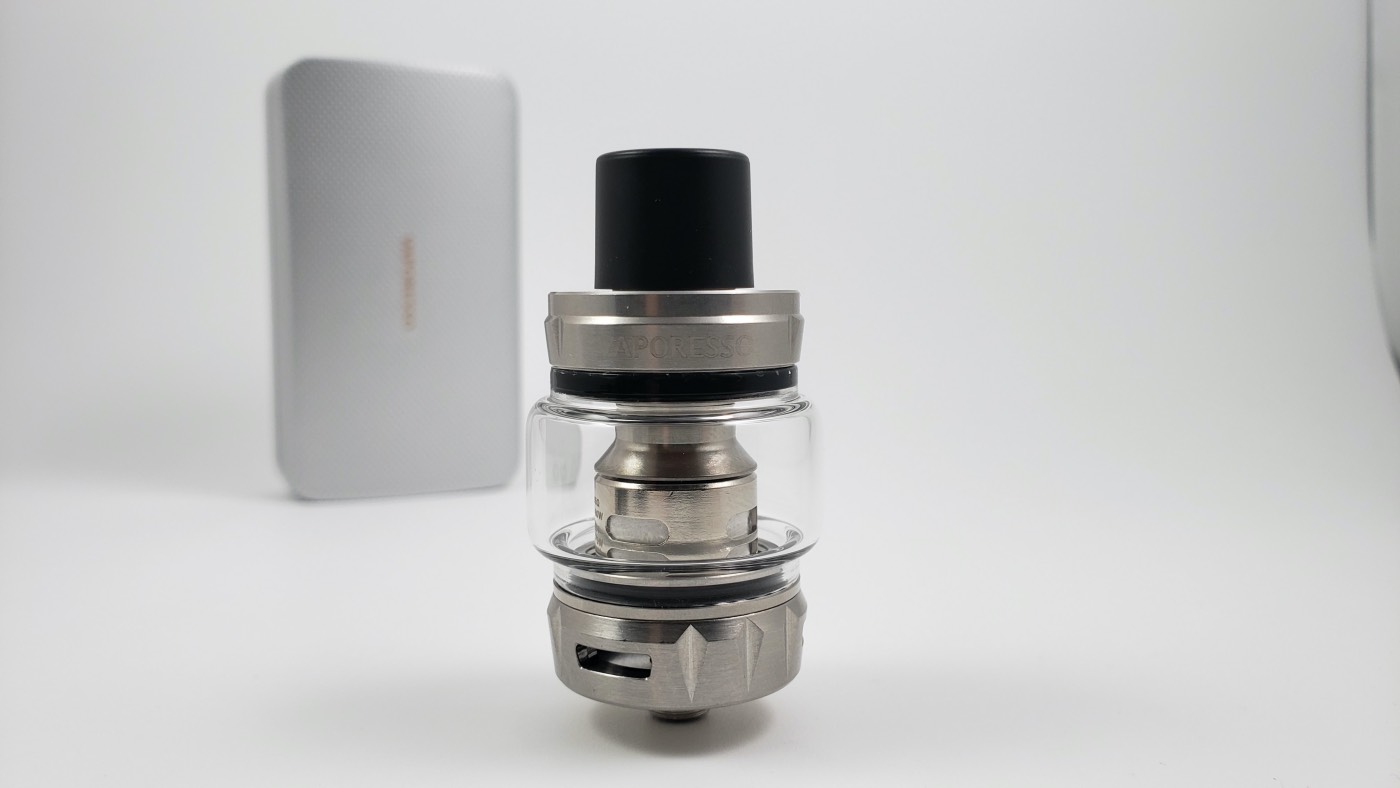 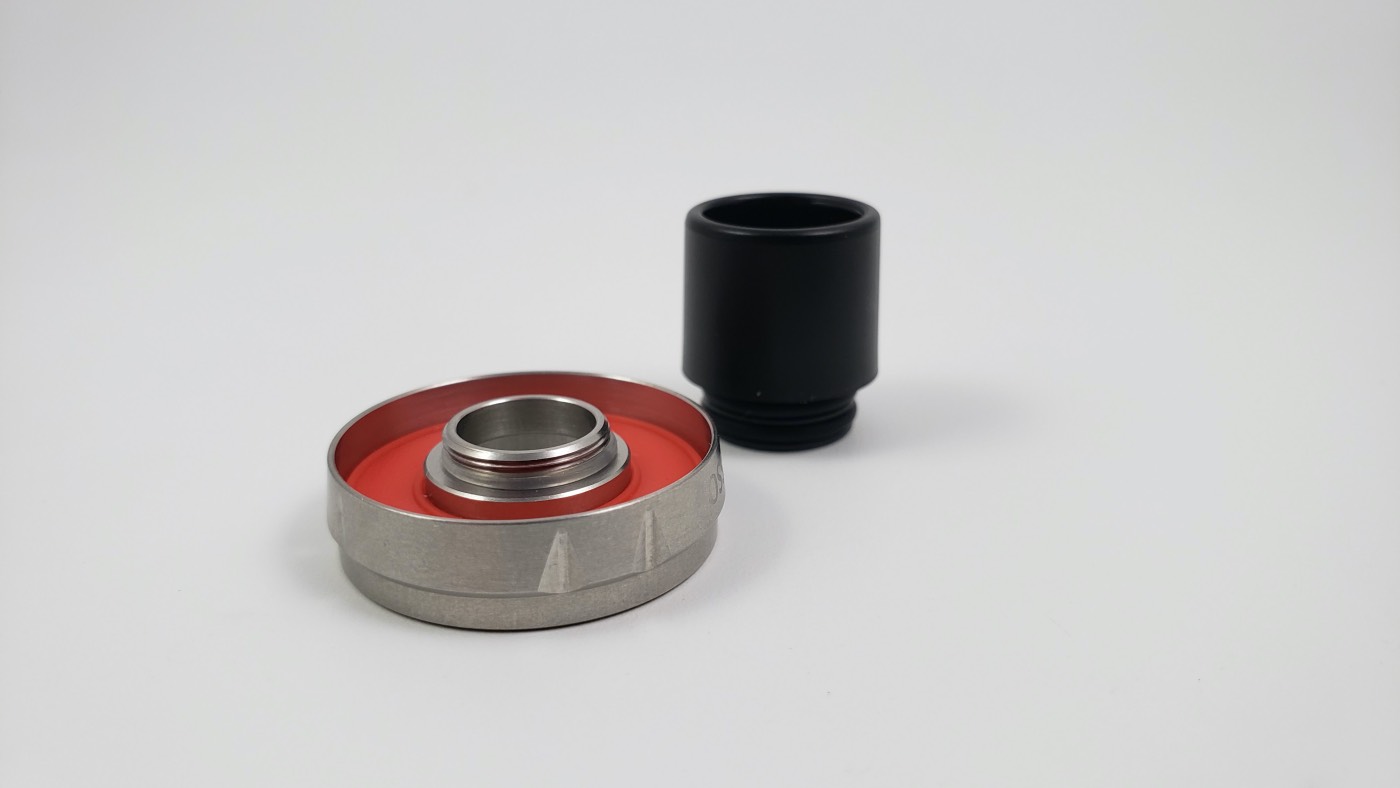 Starting at the top is the drip tip. This is just your everyday black resin tip. It’s a wide-bore 810 tip and that’s it. Nothing interesting about it. 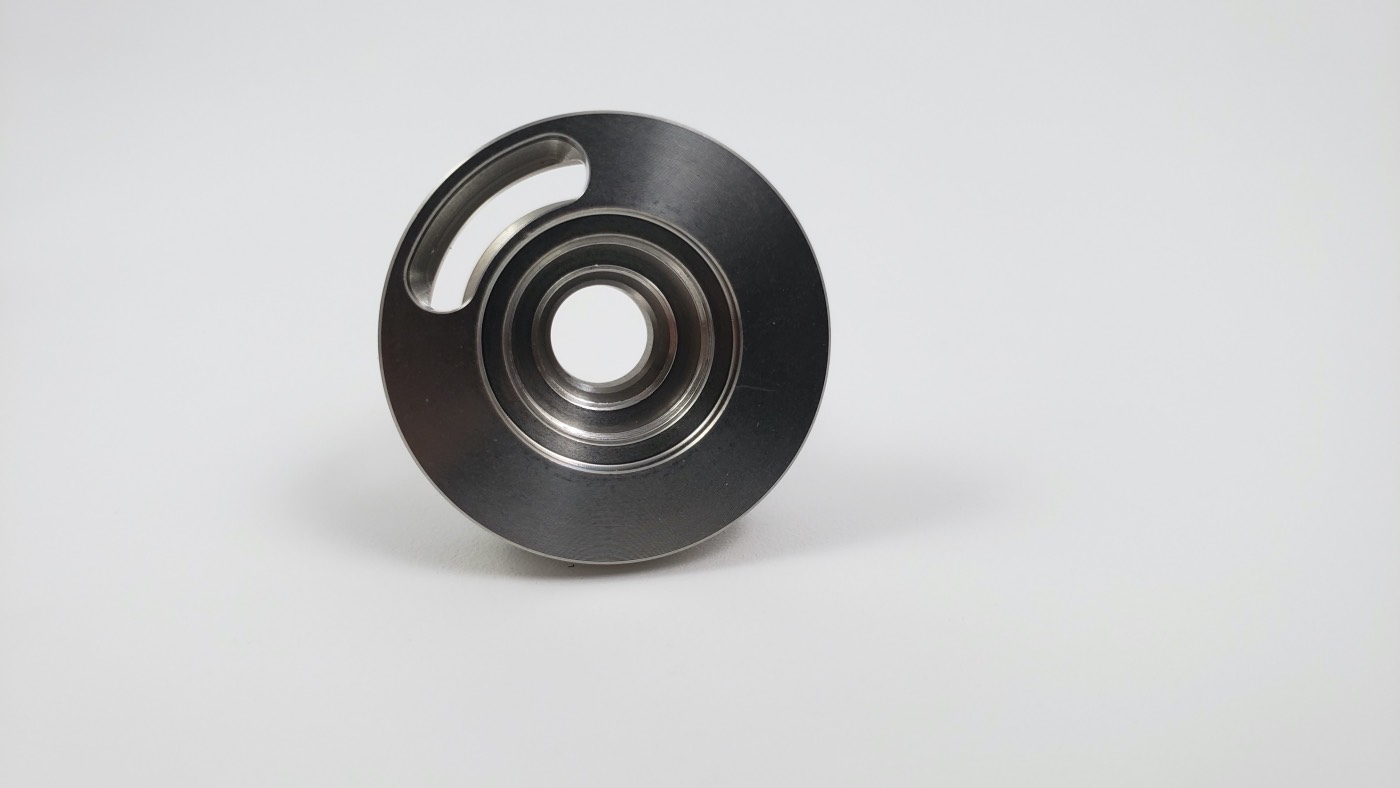 If you look into the top cap, you’ll see that there are threads down there. This is because the drip tip screwed into the top cap on the original Skrr tank and locked the top cap from opening. From what I’ve heard, it was more annoying than useful, so I guess they decided to reuse the top cap on this updated tank but they replaced the tip with a normal one.

The mouthpiece unscrews from the top cap and it gives you access to a single fill port. It’s a big fill hole that’s easy to use. 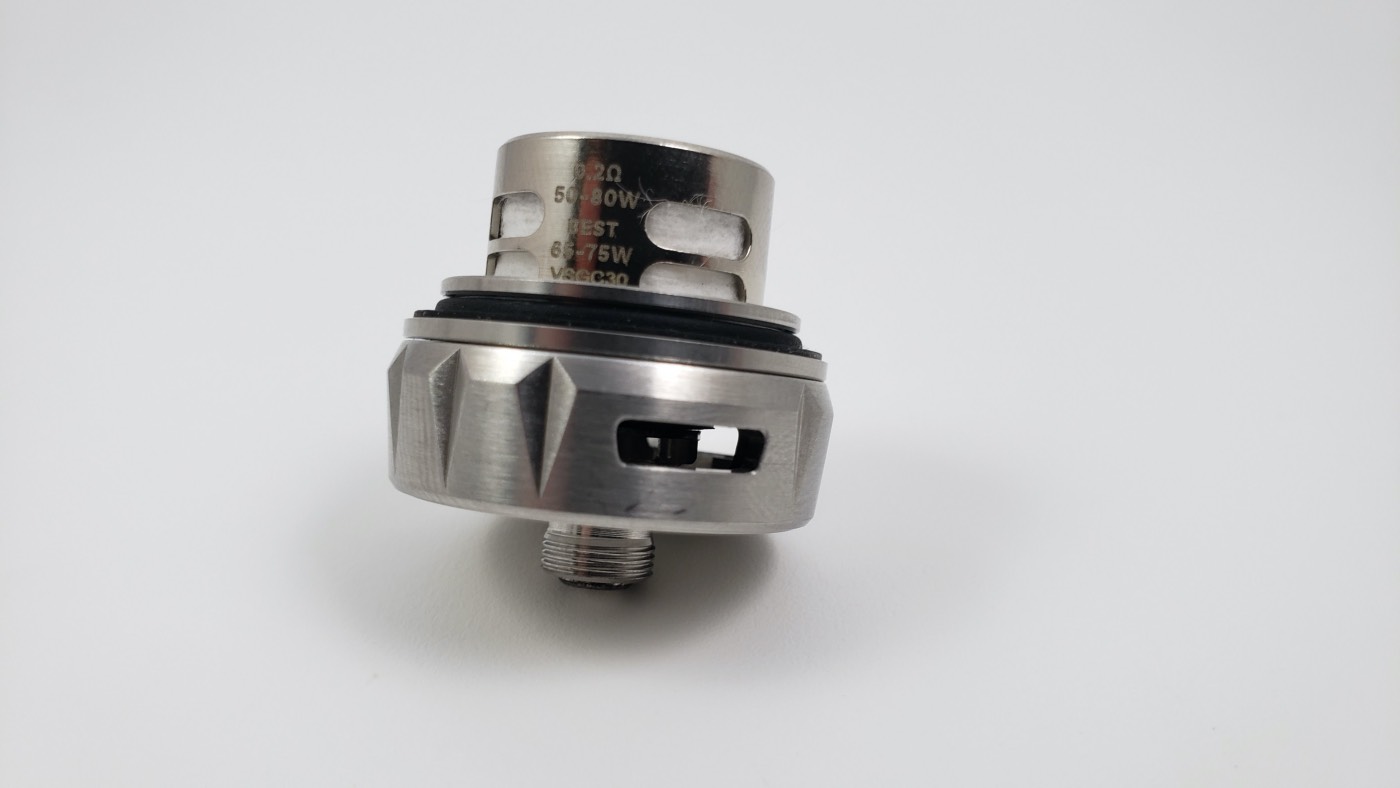 The Skrr-S has what Vaporesso calls the QF air distribution system. The airflow system is designed to deliver a warm vape and a lot of flavor.

The QF airflow also has a unique bullet-shaped design that forces the airflow outward and up, rather than directly up the chimney, which eliminates spit back. 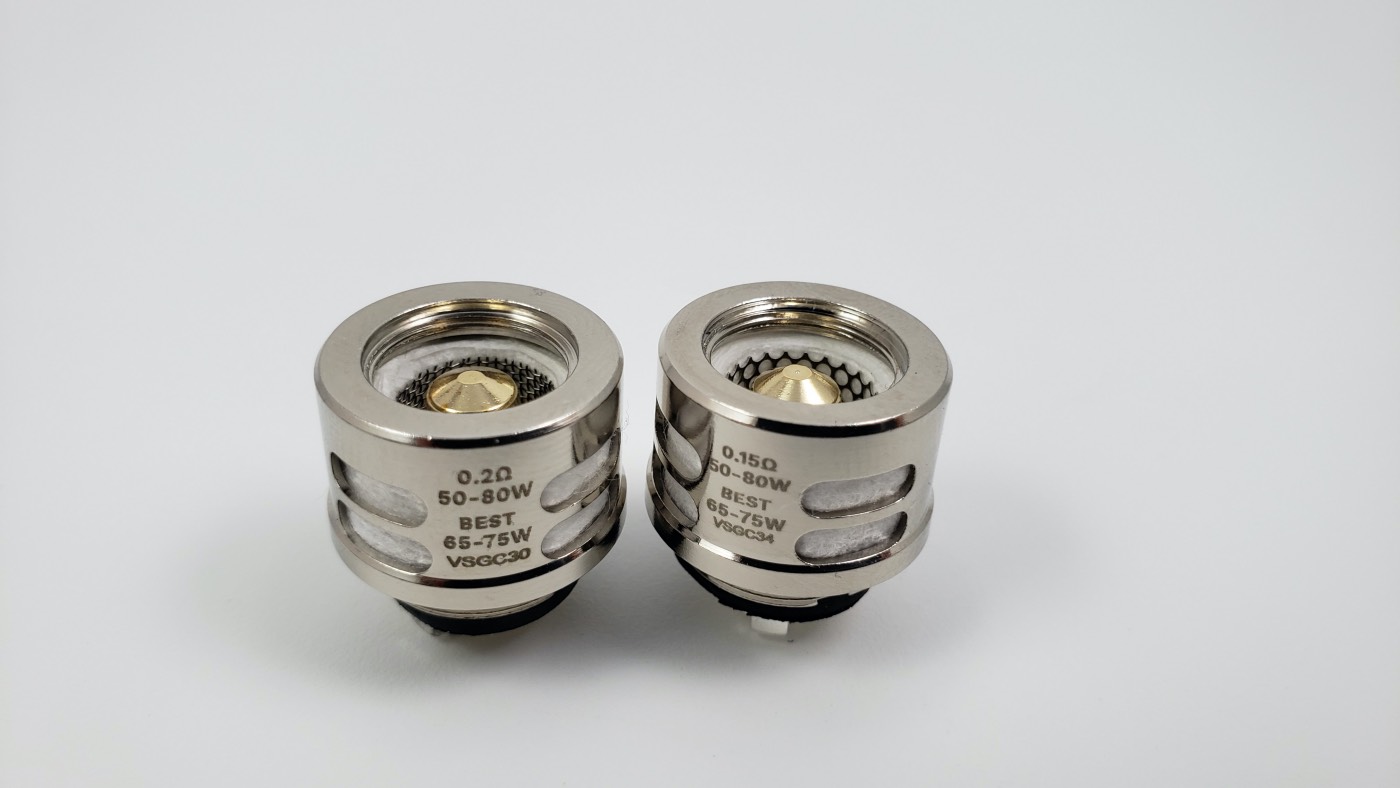 There are two coils available for the Skrr-S tank; the QF Meshed and the QF Strip.

The QF Strip is also a mesh coil, but the mesh has wider holes. This coil head is designed to live longer. It’s built at 0.15 ohm and also rated for 50-80 watts.

Both of these coils use a combination of flax fiber and cotton for the wicks and the flax is what Vaporesso says gives these coils their long lifespan.

Both of the coils have worked well for me. The flavor is good and they perform great at their recommended maximum wattages. 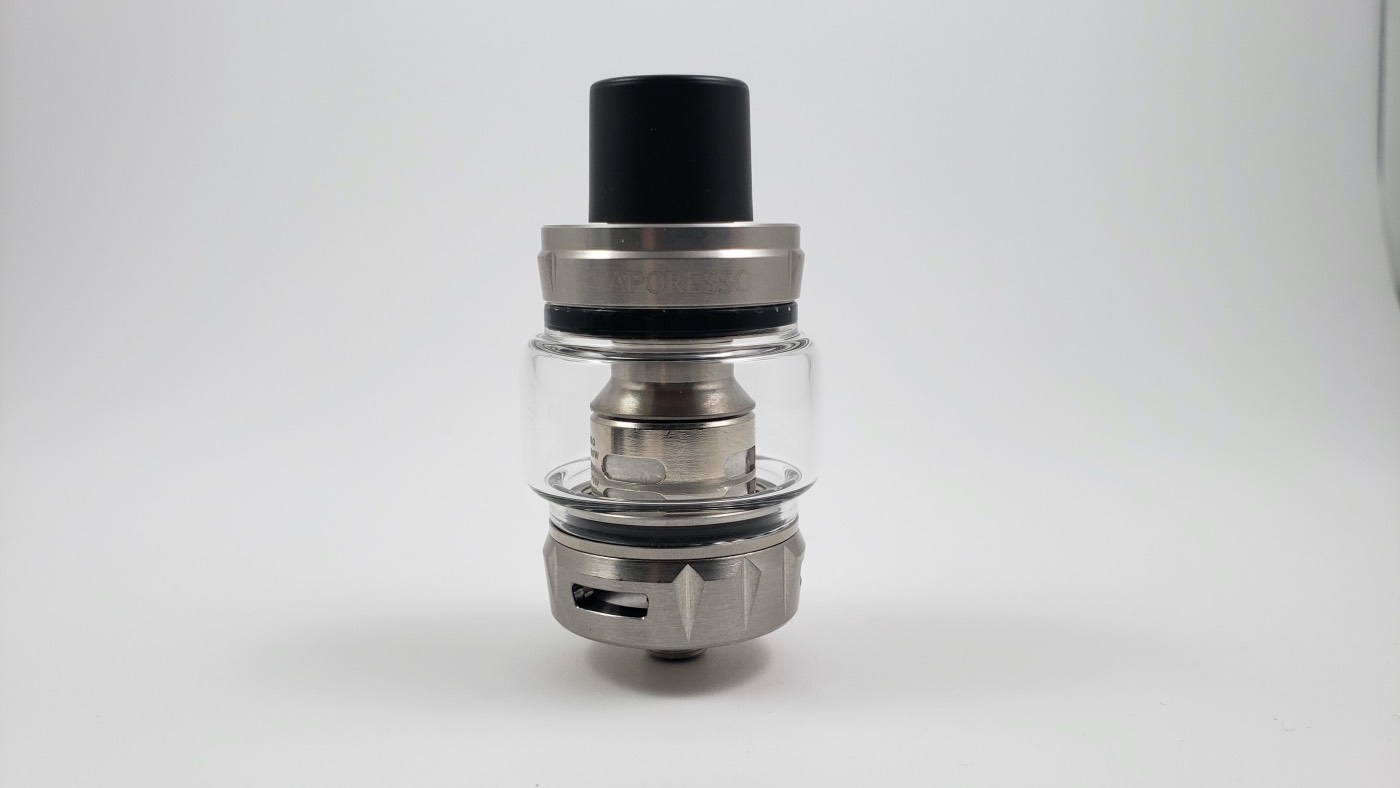 I don’t know if the original Skrr tank had issues with leaking but Vaporesso says that the new design includes an updated base that prevents leaking from the bottom airflow holes. I can’t say for sure how well it works in the long-term, but I haven’t had any issues with leaking since I’ve been using it over the last month.

If you want to buy the Skrr-s tank by itself, you can get it for around $28 and it comes in bronze, black, rainbow, and silver. 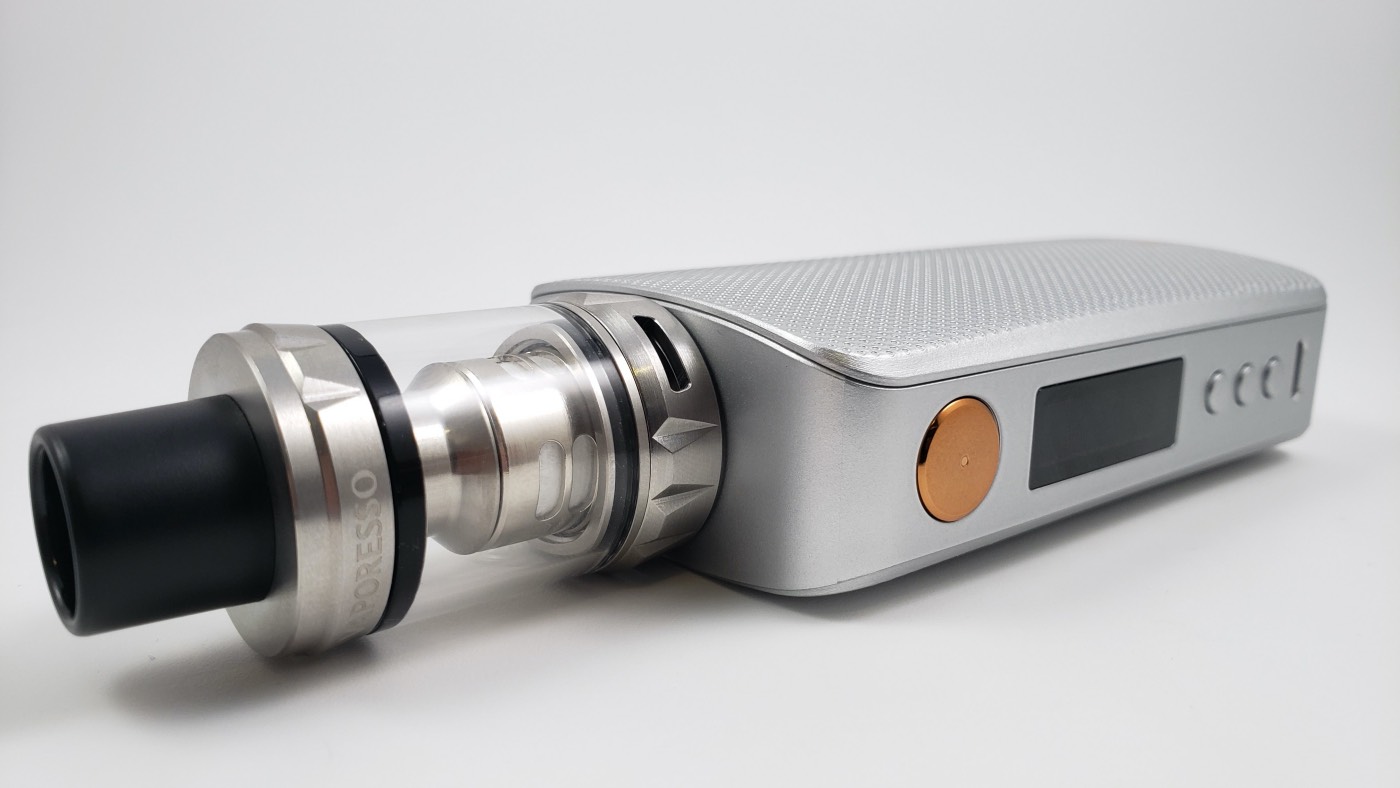 This is an excellent regulated device that I would absolutely recommend picking up. It’s a beautiful device, it’s manufactured extremely well (no rattling), it has all the features you would want, it fires fast, it has 220 watts, and it’s user-friendly.

The Skrr-S is a perfectly fine sub-ohm tank, but nothing special either. It’s like any other sub-ohm tank really. The biggest benefit of the tank is probably the long life of the coil heads. But it works fine, the flavor is pretty good, and it comes with the kit.

This was sent to me for review from Vaporesso and you can get the full kit for around $87 or the Gen mod by itself for around $66.