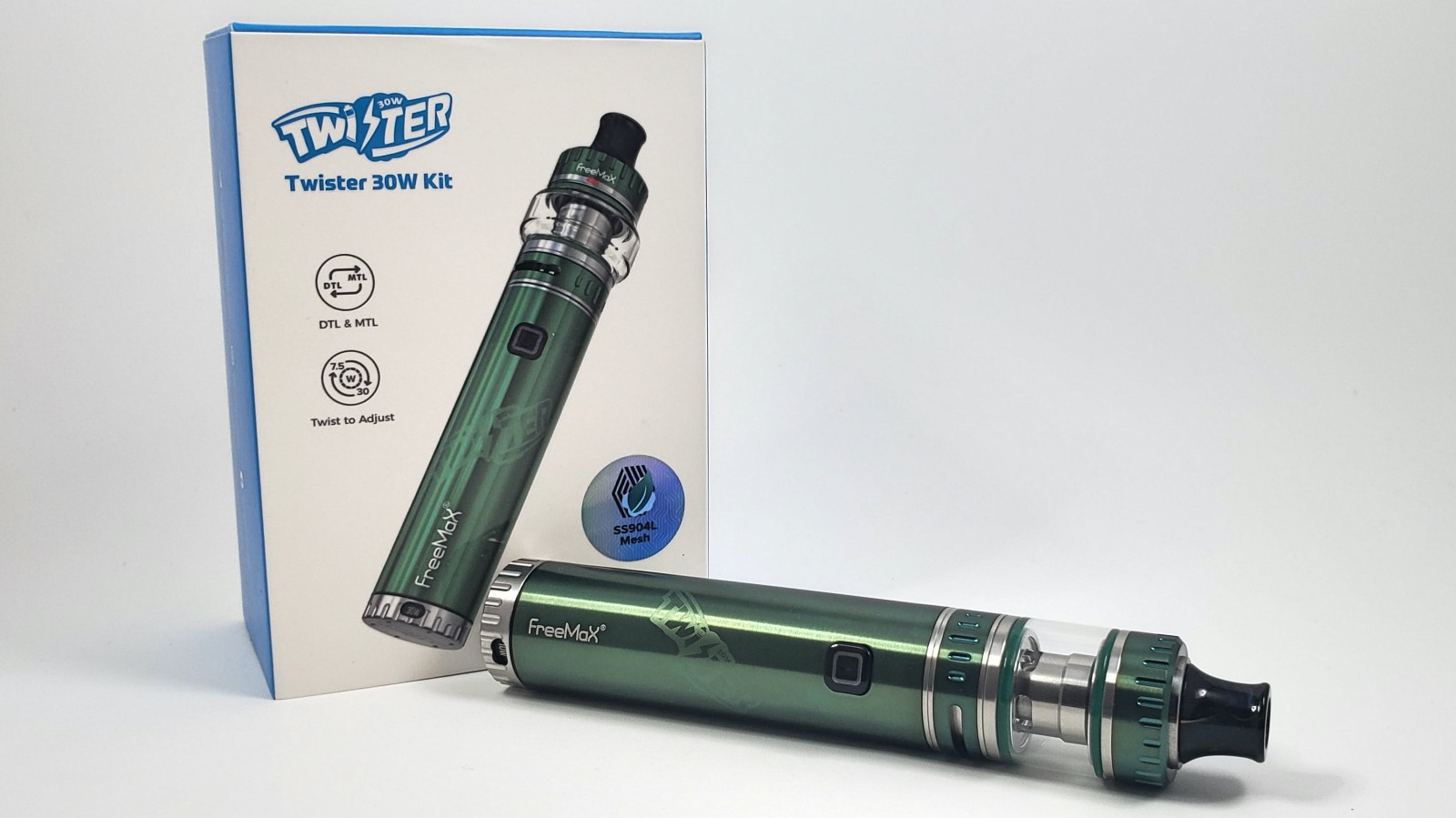 The Freemax Twister was sent to me for review from Freemax (check it out here). This is a new smaller version of the original 80w Twister, which seemed to be a pretty popular device. I never tried it, but it looks nice. And I’ve always been a fan of these round tube-style devices because I like how they feel in my hand and how low-key they are in my pocket. The designs on the tube look good. You have several different designs to pick from such as blue, stainless steel, gold, black, green, and rainbow. All of them have a shiny finish and have the Twister logo printed on it. The logo looks good, so I think it makes the design look good too.

There’s only one button here, which is the firing button. Five clicks turn it on and off and it has an LED light to indicate battery life The device has a range of 7.5 watts to 30 watts and is adjustable in 2.5-watt increments. Freemax used the old-school method to change wattage with a twisting ring at the bottom of the device. And that’s where the device gets its name. Even though it’s old school, it works, and well too. It’s easy enough to adjust wattage quickly. The ring doesn’t spin around loosely either. It clicks in place so you won’t have to worry about it changing accidentally in your pocket.

The battery inside the Twister 30w is a built-in 1400mAh battery that has 1.5 amp fast charging. From a dead battery, you can fully charge it in 80 minutes. The Twister charges using a micro-USB cable, so that’s one drawback. They should’ve used a USB-C cable instead. There are two 510 drip tips in the package. One is a short tip with a curved design and the other is a tall and skinny tip. Both of them have a marble-style look The short one will give you more airflow and works great for both MTL and DL vaping, while the tall skinny one has more restriction, so it’s better for MTL vaping. The top cap has a childproof design. To open it up to fill the tank, you pull up on the top cap and then slide it over. There’s a red mark on the tank indicating the right direction to push the top cap to open it. The features work really well. I like it.

The tank comes with two glass tubes. One is a 2ml straight glass tube and the other is a 3.5ml bubble glass tube. The coils that work in the Fireluke 22 are Freemax’s COILTECH 4.0 coils which are made with SS904L mesh and tea fiber cotton. This coil is rated for 8-12 watts and is best at 10 watts. And it’s suggested that you use 6-18mg freebase nicotine or 20-50mg salt nicotine. So if you like really high nicotine, this is the coil you’d get.

1.0-Ohm MTL Mesh Coil
There’s one other coil that you can use with this tank, but it doesn’t come with the kit and that’s the 1.0-Ohm coil. This coil is designed for restricted mouth to lung hits. It’s rated for 10-15 watts and Freemax says it’s best at 12.5 watts. They recommend this coil for 6-12mg freebase nicotine or 20-50mg nicotine salt liquids. They also say it’s best with 30mg nicotine.

All of their coils are mesh coils, so they’re designed for flavor. And if you’ve never used any of Freemax’s other tanks, you’re missing out because they produce some of the best flavors. And the same goes here. The flavor is excellent.

The tank is designed with a unique leak-proof design that allows you to change the coils even if the tank is full. When you insert a coil, the liquid feeding holes open up and let liquid into the coil, but when you pull the coil out, those holes immediately close. It’s a really cool idea. At the base of the tank is the airflow control ring. You have several holes to pick from to adjust the airflow to whatever you like. On one side you can open up all of the holes to get a lot of airflow or you can close that side down and flip it around to see just a single airflow intake that lets you really close it down. This tank is designed to work well for both direct to lung and mouth to lung and the airflow holes do a good job of meeting both needs. With the airflow wide open, you’ll have a restricted direct lung airflow and all the way down restricts it nicely for tight draw hits. The Freemax Twister 30w was designed to be a simple device that’s easy to use, performs really well at low wattages, works for both mouth to lung and direct lung vaping, and built with a large enough battery to lasts a full day or more. I think they did a good job of making all of those things happen here. Overall, it’s a great device especially for those of you who like MTL vaping

The Twister 30w was sent to me for review from Freemax and you can get it from them for $46.99.