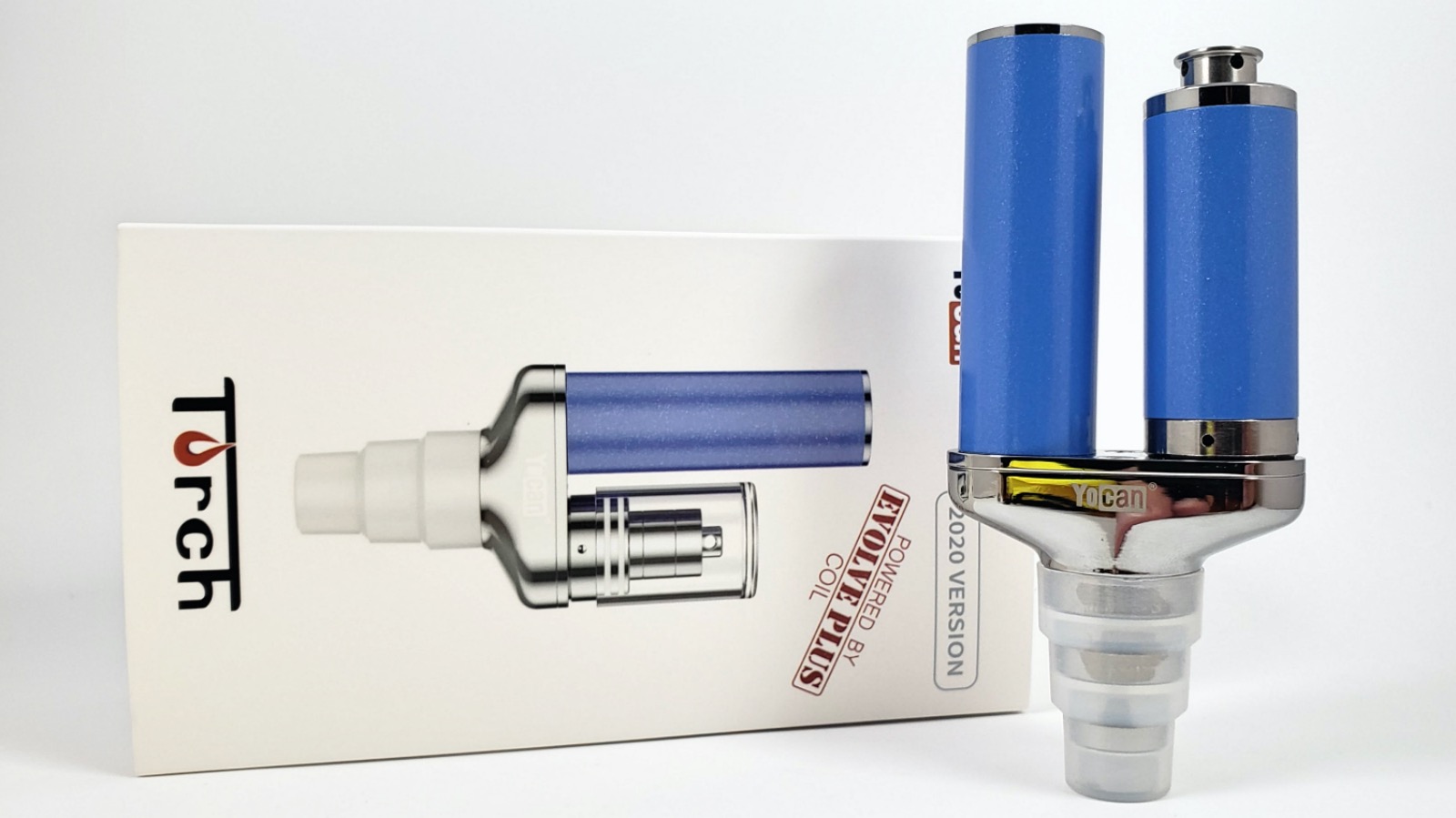 The Yocan Torch was sent to me for review on behalf of VapePenSales.com and YocanUSA.com (check it out here), which has exclusive rights to this new model. They’re an official Yocan distributor. This is an upgraded version of the original Yocan Torch concentrate vaporizer which I believe came out around 2016 or so. The Torch is a portable e-nail device that you would use for thick concentrates like wax and shatter.

I’m pretty new to dab nails in general so an electric enail is completely foreign to me. For any of you seasoned users out there, my thoughts on this might be pretty basic, but I think you’ll be able to get something useful out of this review. As far as I know, this is a totally unique design. I’ve never seen anything like it. It’s a T-shaped connector that a battery on one side and an atomizer on the other. On the bottom is an adaptor that you would plug into something like a water pipe. And even though this comes with a battery and atomizer, you aren’t restricted to using either of those. This is really more of an accessory that combines multiple parts, so you can actually change it up however you like. The connection for the battery is a standard 510 connection, so you could actually use any vape device you want on here. For example, you could screw on an Aegis Solo and fire it that way. This makes it a really cool kit. The adapter has a silicone sleeve over it so that you can plug into something and get a nice tight fit. In my own tests, it fits really snug. I’m not worried at all about it falling out.

To turn the Yocan Torch on and off, press the fire button five times, just like any standard vape device. The atomizer is specially built to pull airflow from the bottom of the atomizer and down into whatever type of rig you’re using. For example, I used this on a hookah setup. Since it pulls airflow down through the base of the atomizer, you can’t really use any other type of atomizer on here. The kit comes with two tubes to cover the atomizer section. You have a solid metal tube that matches the color of the battery or an enclosed glass tube so that you can see the vapor. With the solid tube, you have the option of using an airflow button at the top. This moves in and out of the tube and gives you more control over the airflow intake. It’s a spring-loaded carb that lets you feather your hit. The glass tube doesn’t have a carb but it would work as a carb like a regular nail, so you’d take your hit and pull the glass tube off. That glass tube is solid on the top, so it’s fully enclosed. The atomizer itself consists of a coil cap that screws into the top of the coil that works as a splash guard. Then you have a quartz coil and Yocan makes two styles; a dual coil or triple coil. And that screws into the atomizer base. When it’s all connected, you screw that into the main body of the Torch.

There are two types of coils that come with the Torch; the dual quartz coil that’s used in the Yocan Evolve Plus. And you also get a Triple Quartz coil which is used in the Yocan Regen. So if have those coils already, you can use them here. I like the cross-compatibility.

Other brands of coils will work here too, but your results will vary. Other coils will need to have the same threading as the Yocan coils to fit into the atomizer base and a lot of other brands do, but not all of them do. So that’s something you’ll need to play around with.

The device that comes with the Yocan Torch has a 1100mAh internal battery, which is a pretty good-sized battery. You should have plenty of charge for a full day of vaping.

But also, as I mentioned earlier, you can use any vape device on here, since it has a standard 510 connection. So if you’re using the Torch and the included battery dies, you can simply swap it out with any other device you have and keep using it. Stick devices will fit the best, but you can fit bigger mods on here too as long as it doesn’t block the atomizer connection. And that will give you more customization of the power. If you do this, just be careful that you’re vaping at the recommended wattage for the coils you’re using. It’s a really cool device and I love all of the freedom that Yocan gives you with this. It works perfectly fine with the included parts, but you can also use any other battery-powered vape device on here as long as it’s not so big that it blocks the atomizer connection. If I had any suggestions for improvements, it would have been to include some type of carb on the glass tube (maybe a hole with a silicone grommet?) and to have USB-C charging. But that’s really it. It works great and it’s a lot of fun to use.

This was sent to me for review from YocanUSA.com and it’s exclusive to them so that’s the only place you can get it. You can pick it from them for $54.99.