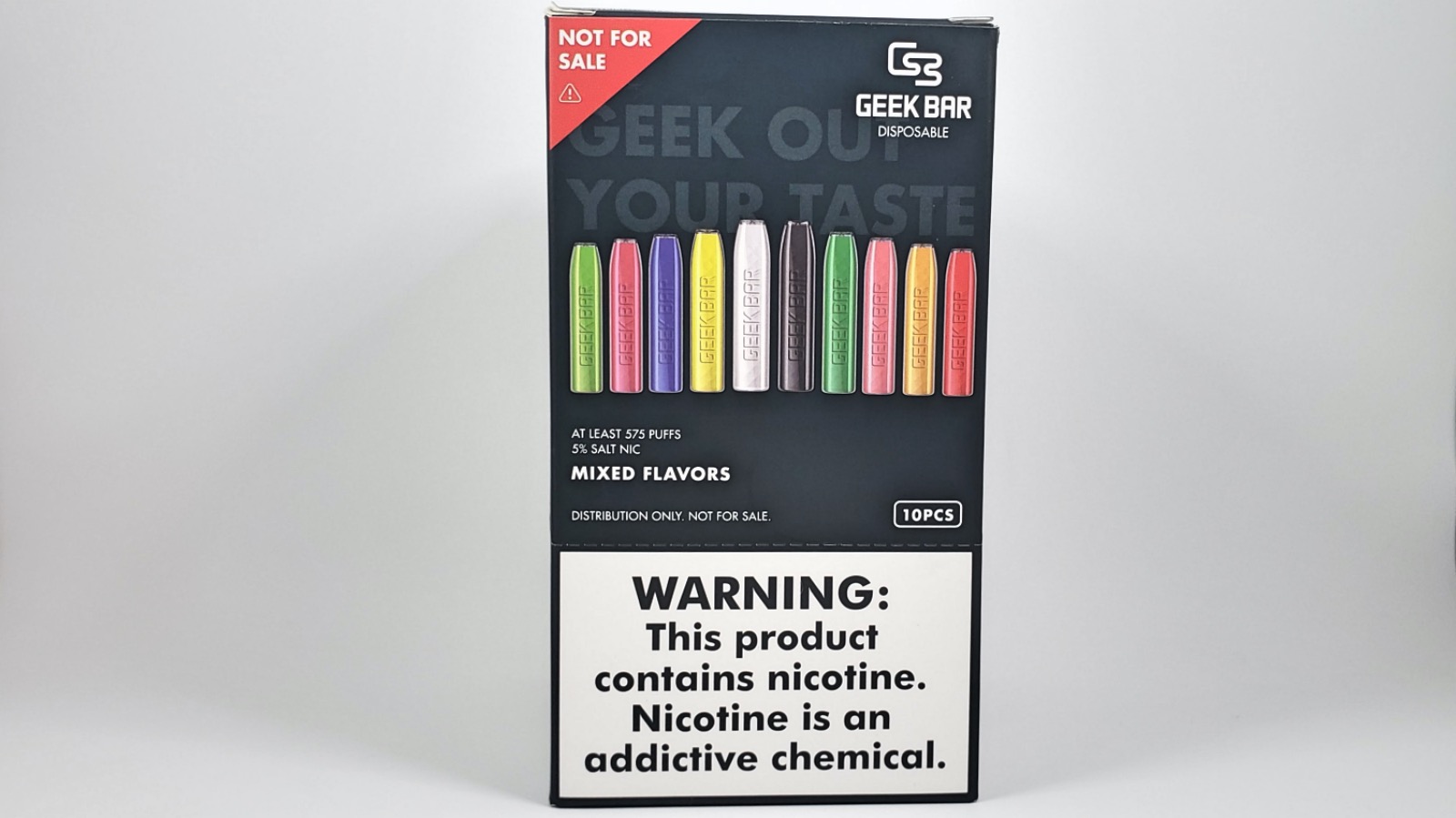 These Geek Bars were sent to me for review from HeavenGifts.com. These are disposable pod devices that are supposed to last 575 puffs and come in ten different flavors. I believe the Geek Bars are usually sold in individual packages for $9.99 each. You can get them from HeavenGifts.com here.

This must be the new popular style of disposable pod devices being manufactured in China because it’s nearly identical to the Elf Bars that HeavenGifts sent me a while back. There’s nothing wrong with that though. They’re good-looking devices.

These all come in solid colors with a clear layer of plastic over the top of it, and branding under the plastic that says “GEEKBAR”, which actually looks pretty cool. The ends are also clear and the mouthpiece is tapered. That’s really all there is to it as far as the design goes. The watermelon smell is extremely strong when you pop this out of the package. It smells really good. The taste is just as good. It’s a nice strong and sweet watermelon flavor with just a hint of menthol. The tobacco has a very interesting smell. It actually smells a lot like some type of alcohol, like whiskey. The flavor is similar. It’s very strange. It doesn’t taste a lot like tobacco to me or at least it’s a very light tobacco with a hint of brown liquor like whiskey or scotch. It also has a slight hint of sweetener. It reminds me of a mix of Five Pawns Castle Long and Blacknote’s Virginia tobacco liquid. This is a very strong minty menthol flavor. It doesn’t taste like tobacco or any other flavor, just straight up menthol, like a candy mint with a menthol throat hit. This one is more of a lighter lychee flavor, which lychee usually is so I think it works out well. It’s a good sweet lychee. If you like mango flavors and menthol, you’ll like this. The mango is really good and strong. It’s not a super sweet mango but more of a naturally sweet mango. This one is really good if you can handle the menthol. This is a rich and sweet strawberry candy with a somewhat earthier taste on the end. It’s not really earthy, but more of a darker flavor. I don’t know how to explain it. But nonetheless, it’s good. This one is a little different than your usual sour apple flavor. It does taste like sour apple, but it also has a sort of earthy taste on the exhale. It’s not bad, but it’s strange. This also has menthol in it so you’ll also get a bit of that hint in the flavor. This one tastes like a banana taffy with menthol. I like the flavor but I would have liked for the flavor to be a little stronger. It’s a little mild for a banana flavor in my opinion. This one tastes like a minty peach candy. This is a sweeter peach as opposed to a natural peach. It’s not overwhelming sweet to me, but I think it has just the right amount of sweetness.

All of their flavors have menthol so that’s something to keep in mind. I don’t always vape menthol so I know that it can be a little hard on the throat at first, but I tend to get used to it really quickly and end up really liking it. So you might be the same.

I did have one issue with one of these where I pulled it out of the package and the seal came off the end and it started to auto-fire. I had to take a couple of puffs on it to make it stop. It kept happening too and I had to take a few puffs again, one time while covering the airflow on the bottom. That’s a frustrating problem so I just wanted to let you know about that in case it happens to you.

You can get the Geek Bar from HeavenGifts.com for about $9.99 each.