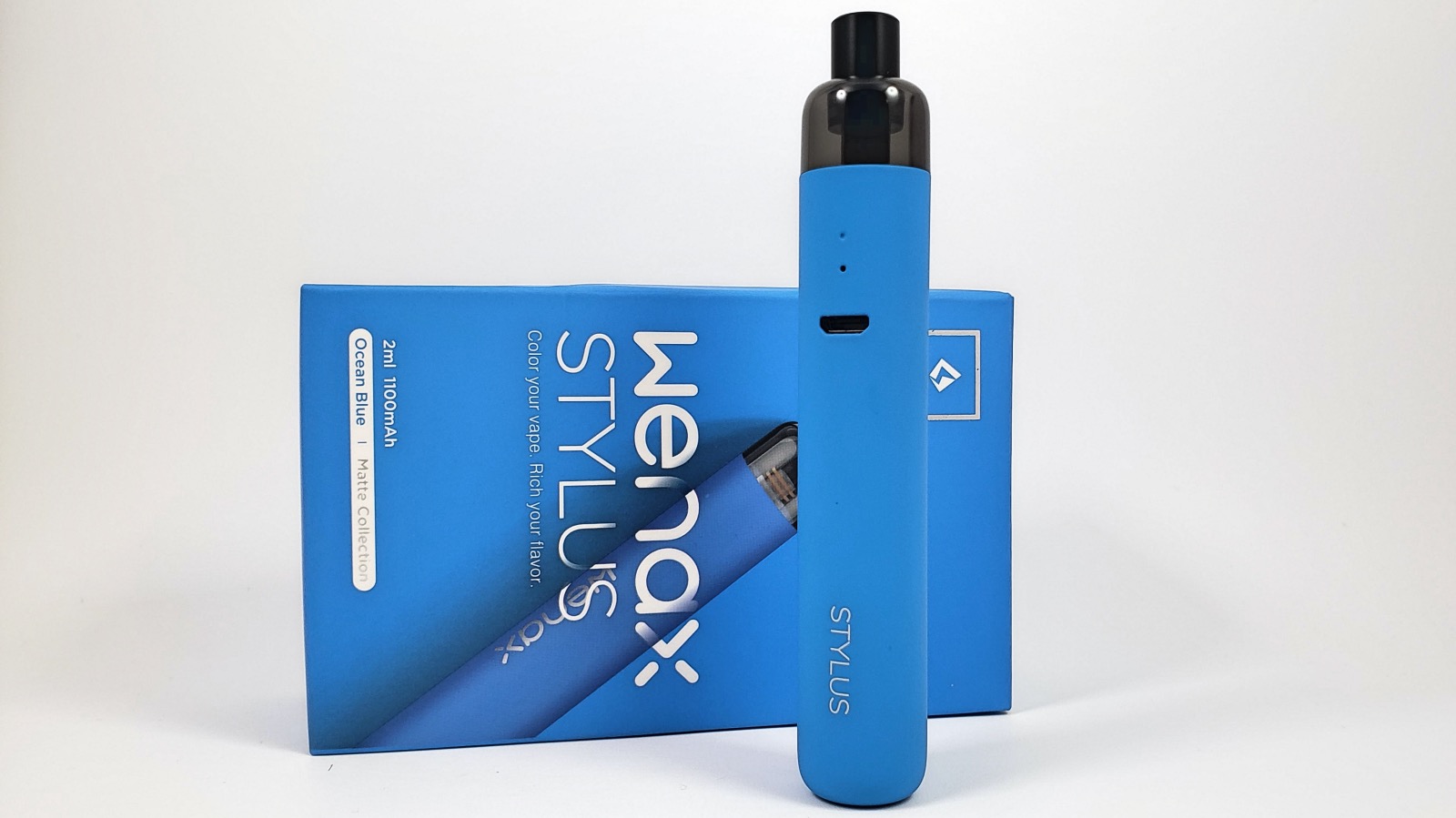 The Geekvape Wenax Stylus was sent to me for review from Geekvape. This is a new beginner pod device that Geekvape says is designed for comfort, simplicity, pro performance, and mellow flavor. Those last two features are really interesting, and a little confusing actually, to describe your own pod system. Pro performance from a pod device? How? And mellow flavor? So are they saying that it doesn’t have very good flavor? I’ll go over these things more during the review.

The Wenax Stylus is pretty basic. There’s not a lot going on here, but that’s okay. It’s very clean and minimal.

The first thing that came to mind when I saw this was the Ijoy Diamond Bae and VPC pod kit. The Ijoy device was very different than this but the pod looks very similar. The Wenax is like a wide stick battery with the same type of pod on it.

The diameter of the Wenax is 18.84mm, so it’s pretty slim. And it’s a unibody aluminum structure that weighs only 44 grams, so it’s really light too. It stands fully assembled at 112mm, which is about 4.4 inches.

There are several colors to pick from such as dark red, classic black, space grey, army green, ocean blue, and granite grey.

On the device, you’ll find some branding etched into the device – “Wenax” on one side and “stylus” on the other. You’ll also see the micro-USB port and an LED and airflow intake above that.

You’ll find the firing button on the very bottom of the device. Press that five times to turn the device on.

The Wenax Stylus has the ability to fire using either a draw-activated or button-activated method. There are no settings to turn one or the other off. You can use either one at any time. If you use draw-activated, the device will fire as soon as you hit it and will fire at whatever wattage setting you’ve set. If you use the button, it will always fire at the max wattage for the coil you’re using.

The button is on the bottom of the device so it’s a little awkward to fire. It’s a lot like a mech mod, so if you’ve used a mech mod, you might not mind the button position, but I think it would’ve been better to place the button on the side of the device, just to be more comfortable. 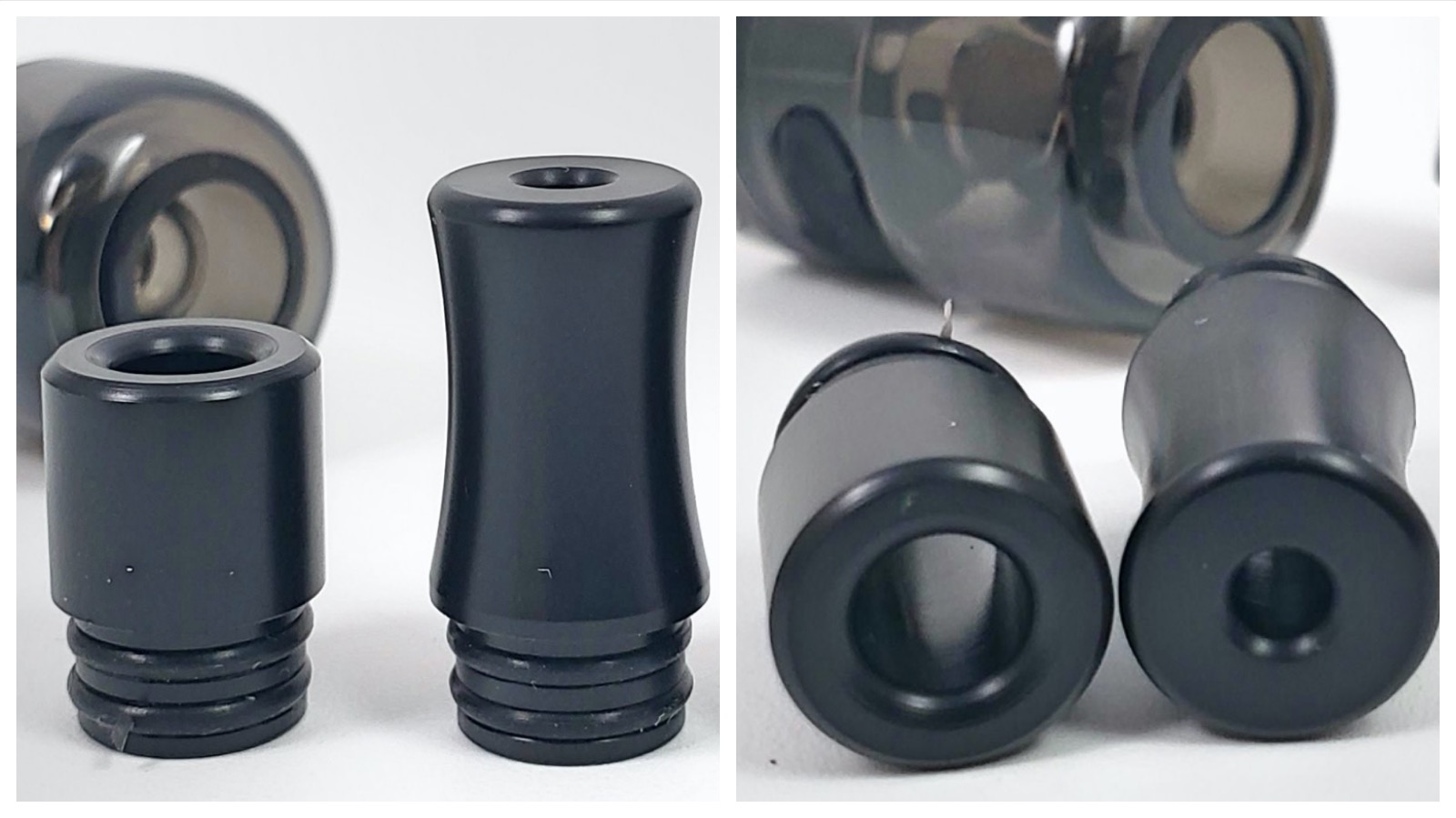 The pods hold 2ml and it comes with two removable Delrin drip tips. One tip is short and round while the other is longer and curved. They’re both comfortable to use and the curved one will restrict the airflow a little more, which I like. But It’s very cool that you can also use your own drip tip on here if you want. 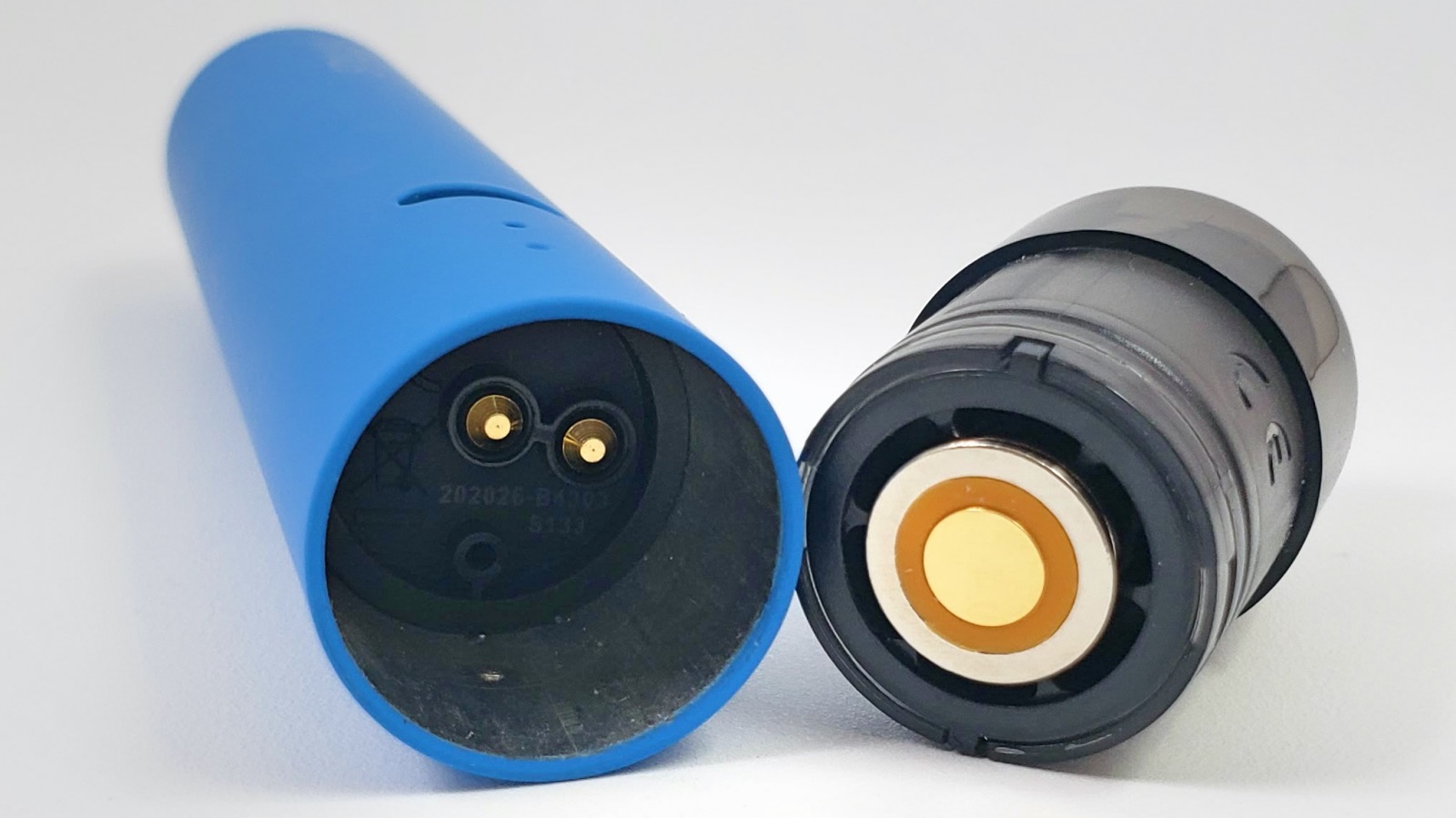 The pods drop into the top of the device and it sits real snug. There’s no worry of this falling out in your pocket. 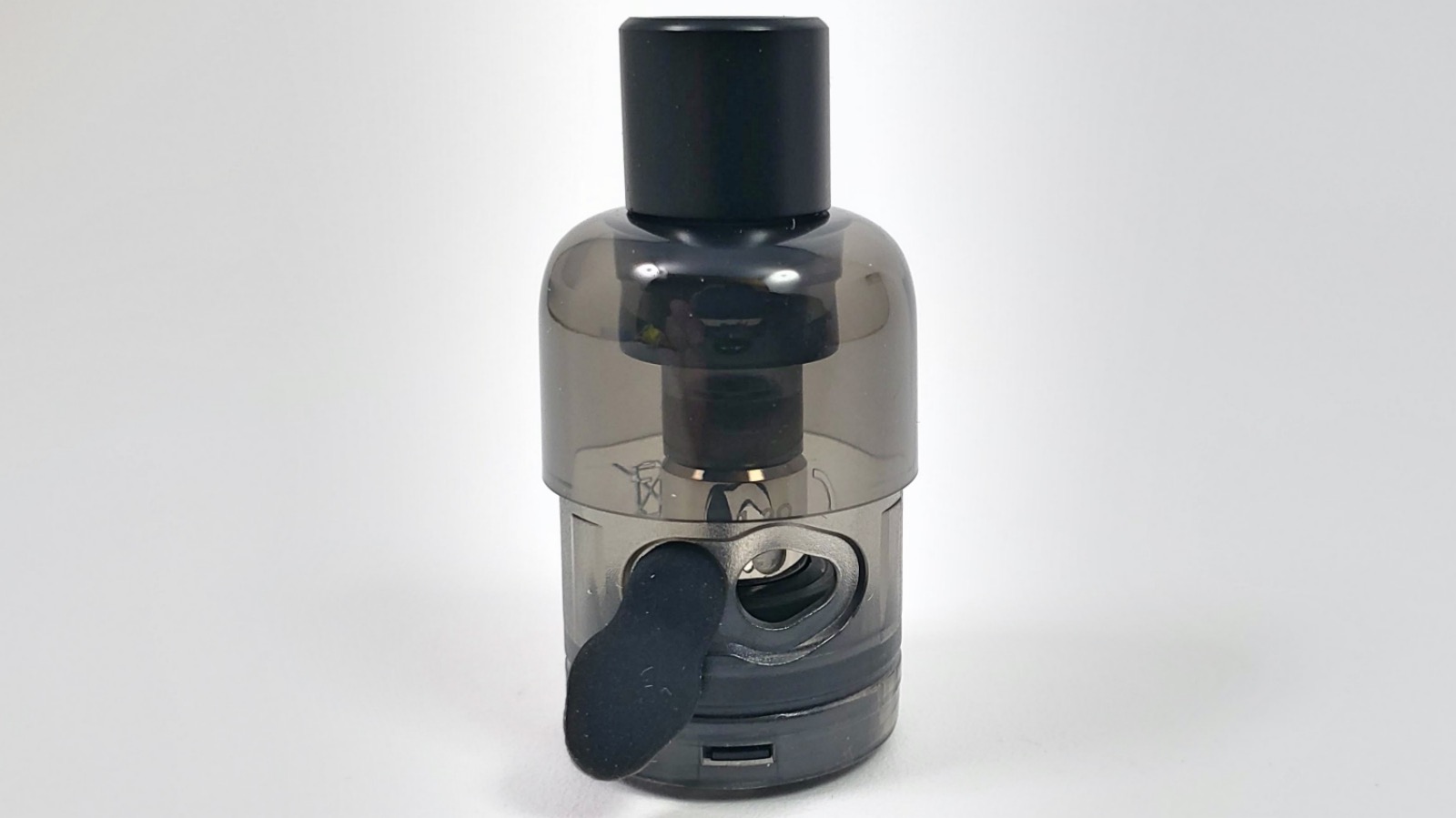 To fill it up, pull open the little rubber seal on the side and fill it up. 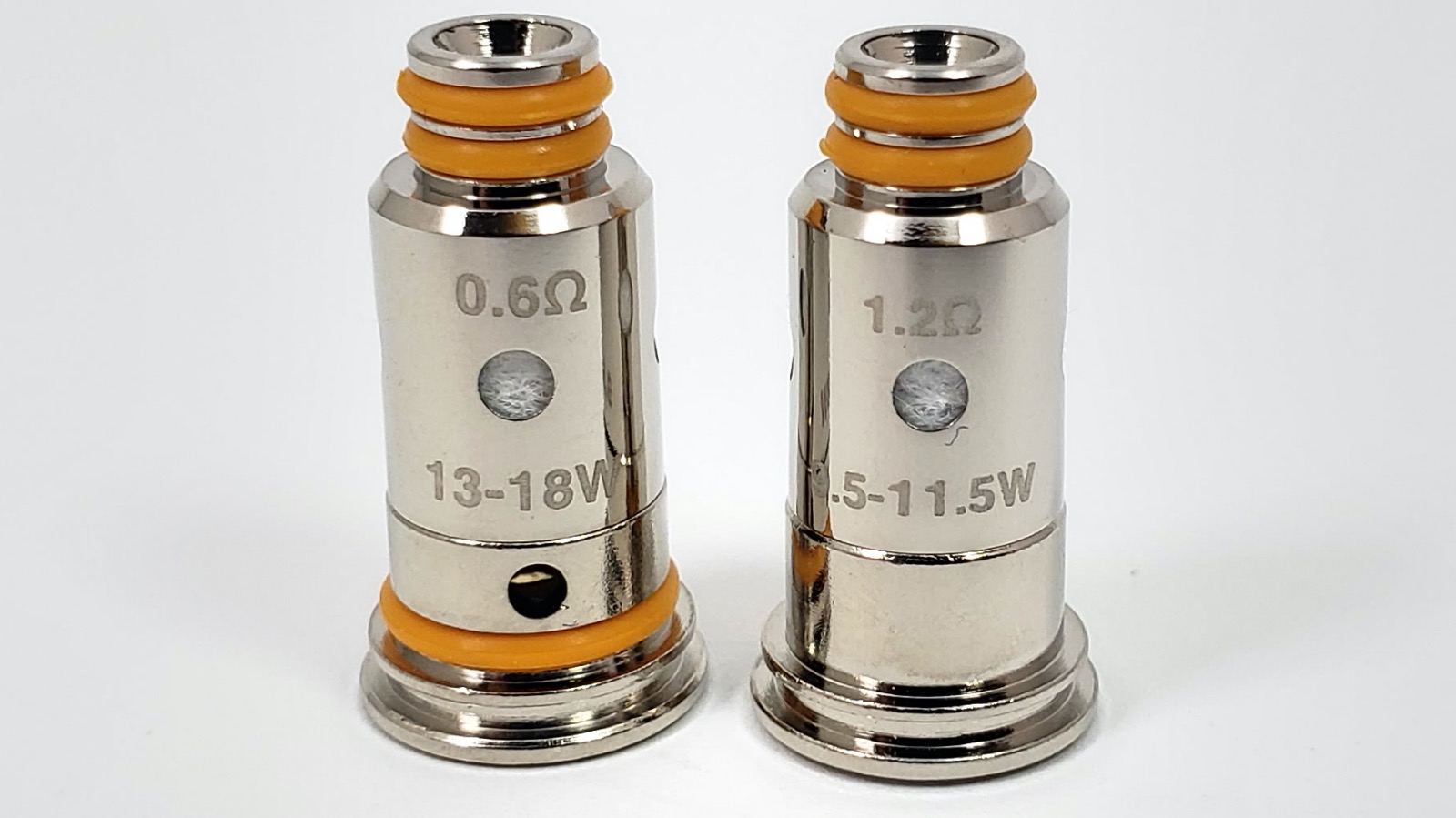 The coils are separate from the pod, which I think is great. I like that I can buy replaceable coils for this, rather than having to buy complete pods. 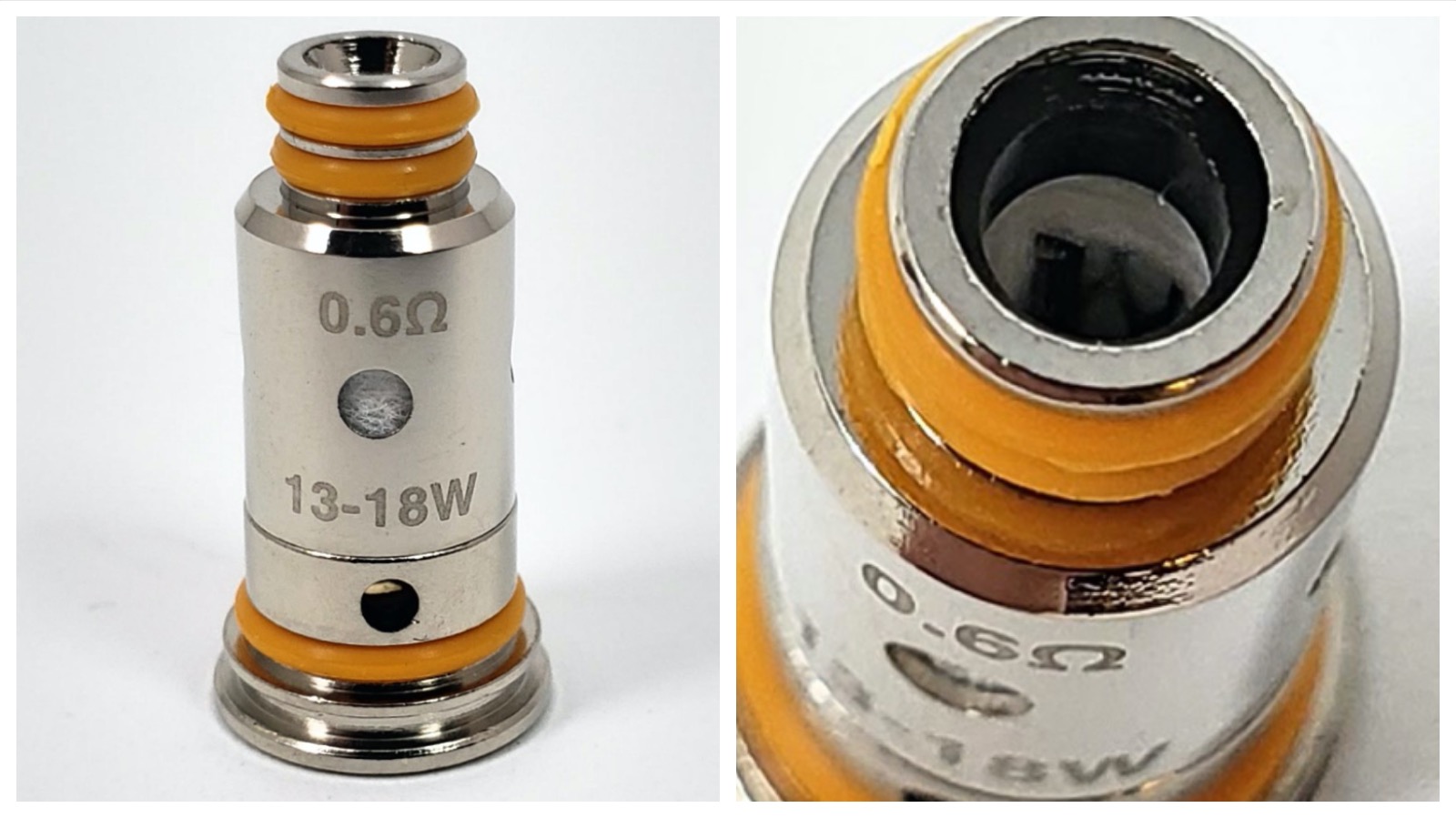 This coil is designed to run between 15-25 watts, but can only be run in the Stylus at 14, 15, or 16 watts. The flavor from this coil is pretty good and you can some nice satisfying hits from it. 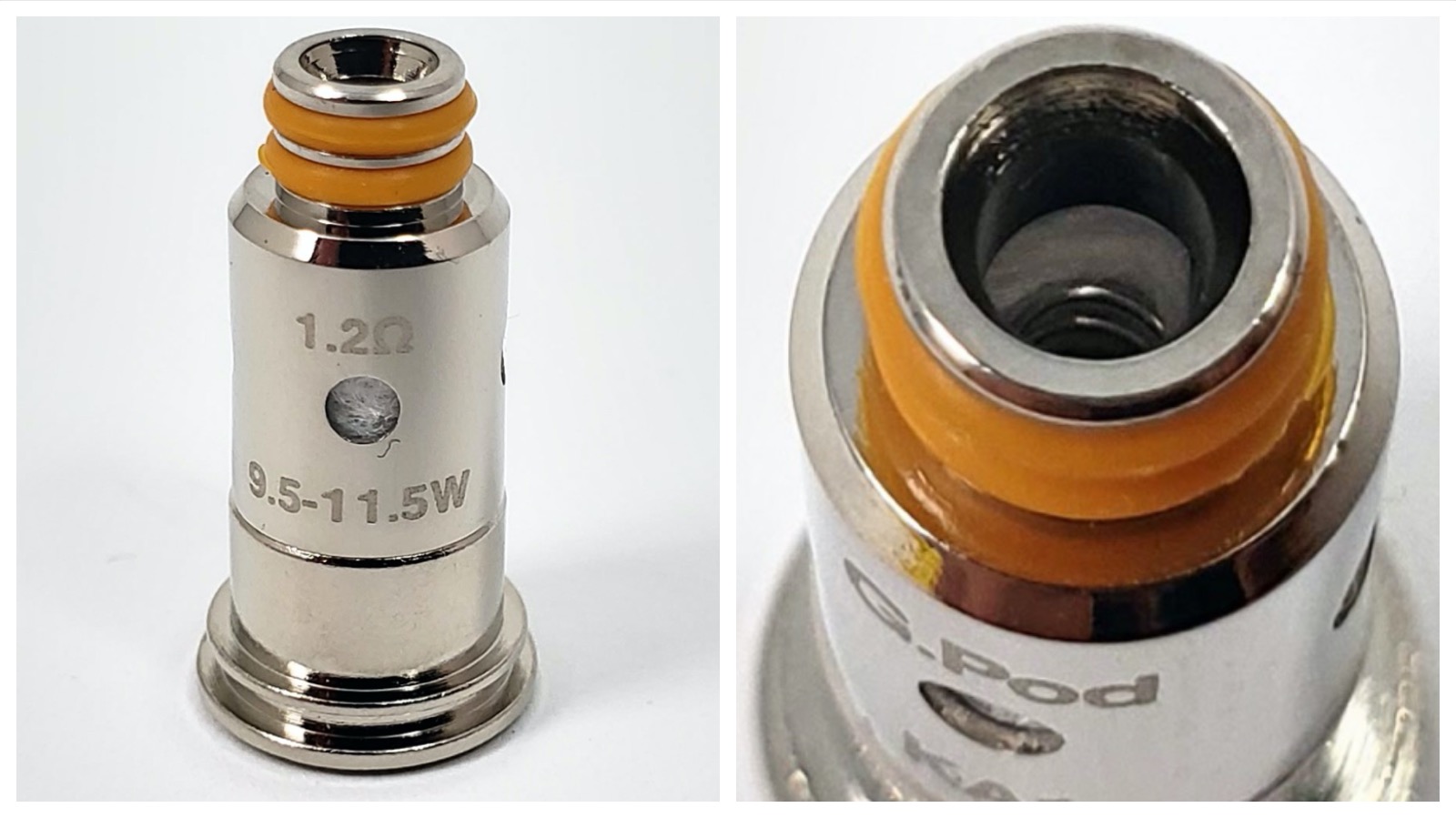 This coil is designed to run between 9.5-11.5 watts, but can only be run in the Stylus at 9, 10, or 11 watts. The flavor from this coil is pretty good but unfortunately, it has issues with wicking. I can usually get one or two hits in a row but then it starts to go dry. If that happens to you, you can plug the airflow holes and take a hard hit and pull more liquid into the coil. It’s not acceptable, but it works if you already have this device.

The coils are designed for a longer lifespan than most average coils. Geekvape says the coils should last seven refills of 2ml’s of liquid. Average is about 5 refills for most other coils, so they say you should get a little more. 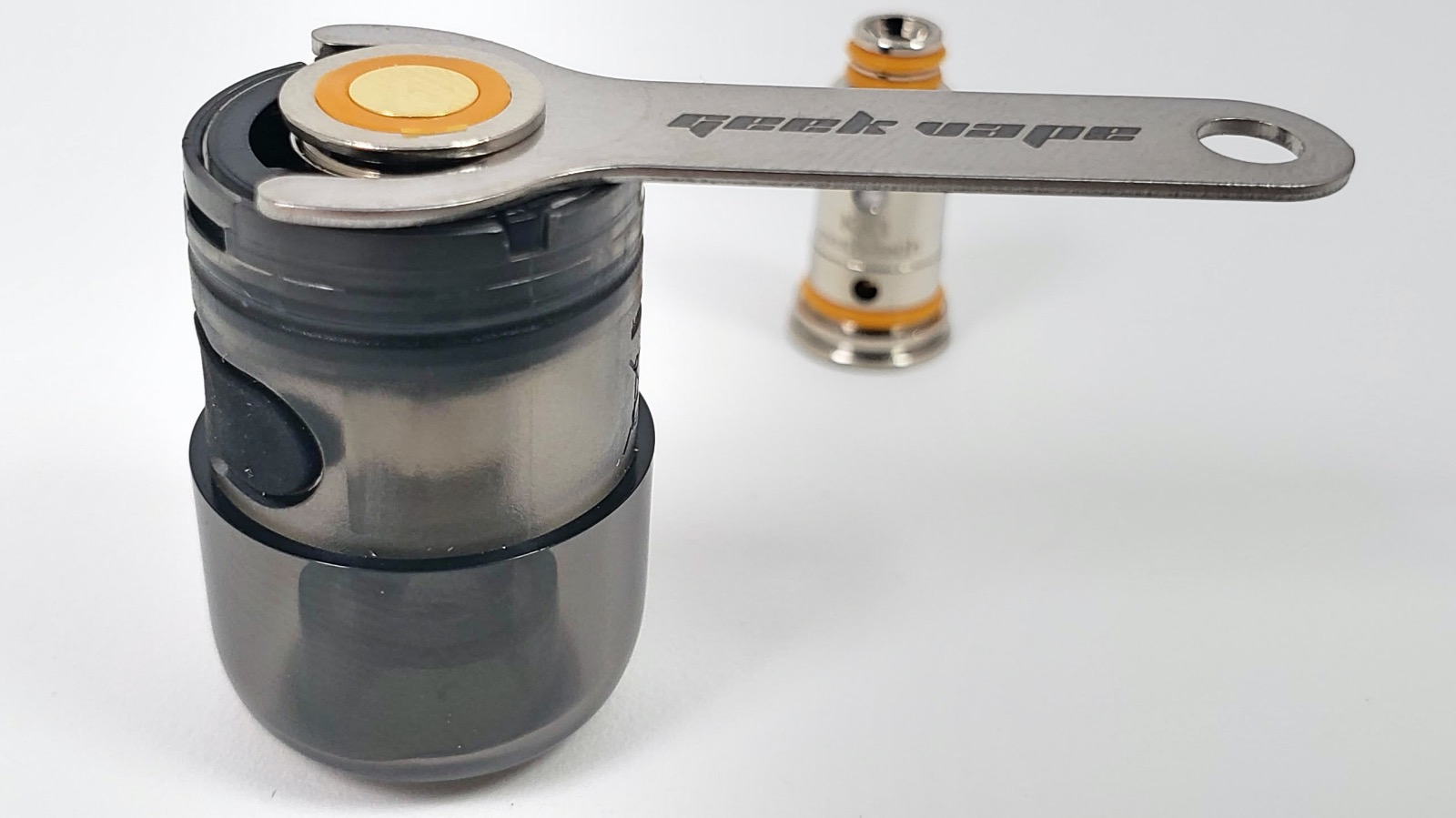 You’ll probably need to use the coil removal tool to get the coils out because they fit really tight. I couldn’t get them out with my fingernails.

Geekvape says that the Wenax was designed for mellow flavor, long-lasting consistency of flavor, and it gives you the ability to clearly identify mixed flavors.

I don’t have the sort of palate to be able to taste the intricacies of mellow flavors but I have used this with mellow flavors and it’s pretty good. I really enjoy the flavor I get from these pods.

There are two airflow inlet holes on opposite sides of the device. The airflow from the Stylus is a restricted mouth-to-luing hit. For me, it works really well and I like it a lot. 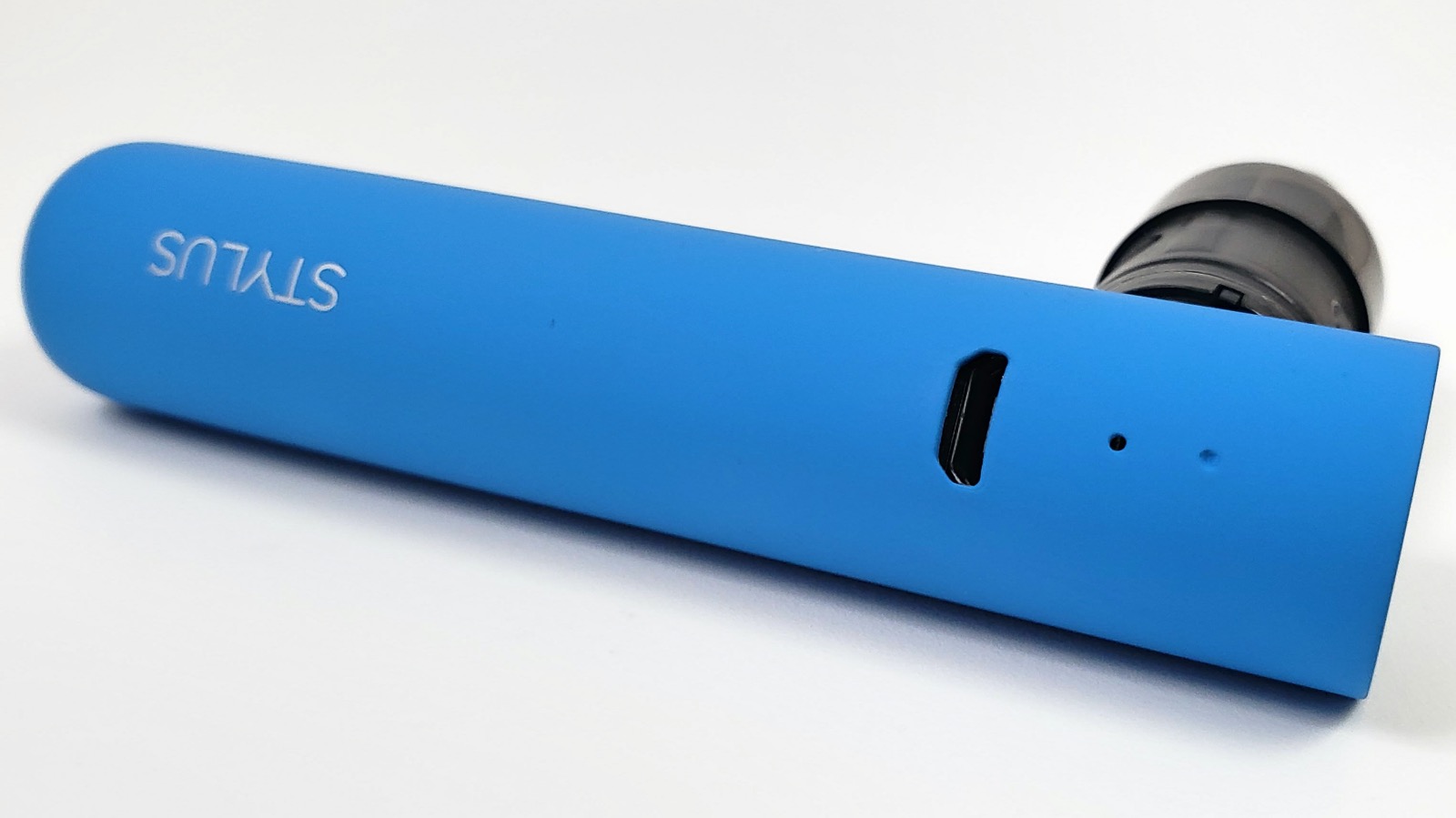 The battery inside the Wenax is a 1100mAh internal battery. Geekvape says this will last you two days and if you’re using high-nicotine and not chain-vaping, that’s probably accurate. For me, it definitely lasts 2 days, but that’s because I use 50mg nicotine and I don’t vape all day.

The battery charges using a micro-USB cable at a 1amp charge. 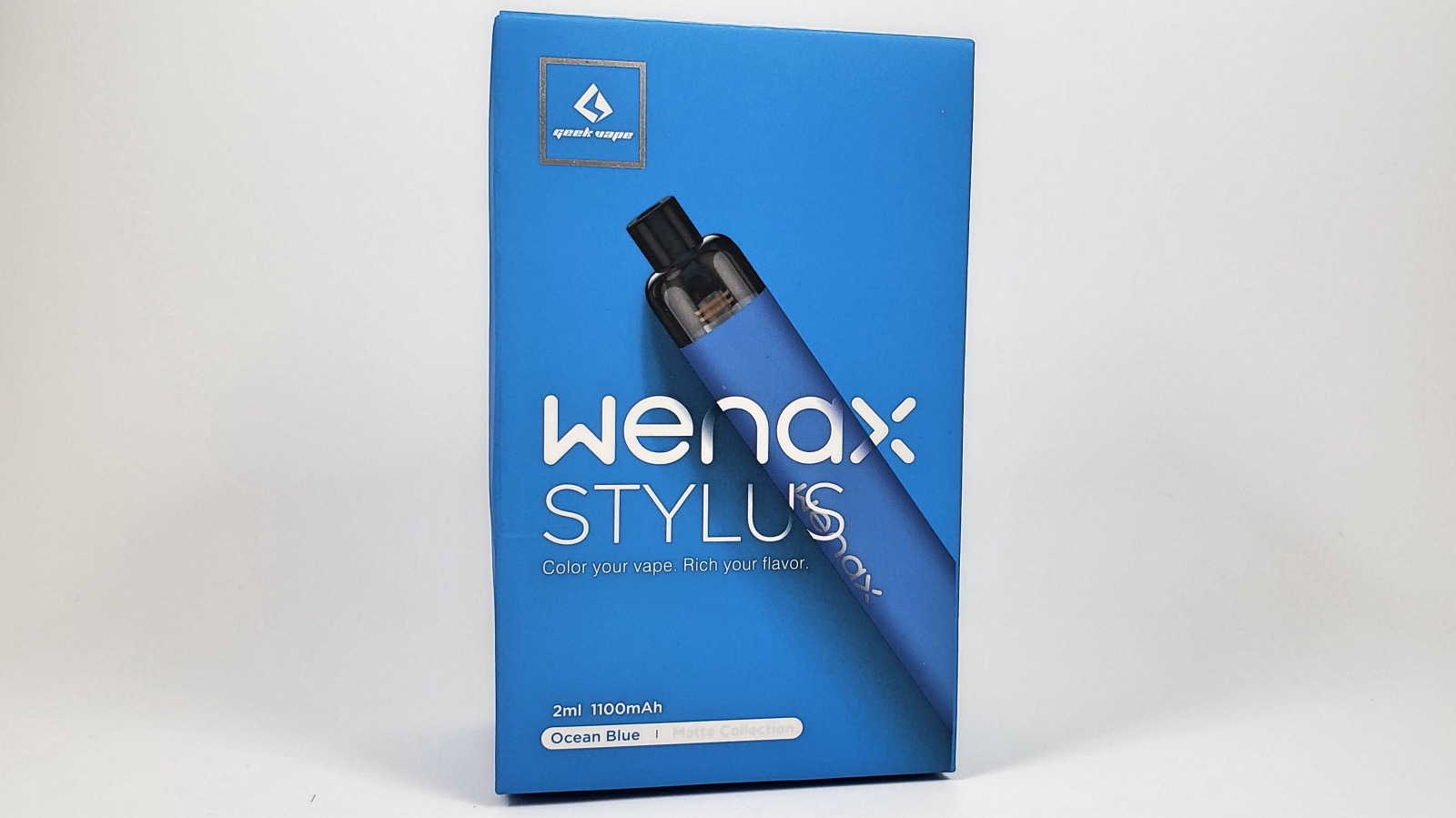 Geekvape included adjustable wattage, both draw-activated and button-activated modes, the coil heads are replaceable, and it can detect the coils and adjust the wattage accordingly. I think it has some nice features for a pod device. It would have been nice if it had adjustable airflow but other than that, it’s a great device. The 1.2 Ohm G.Coil was a failure for me, unfortunately, but the 0.6-ohm coil worked great.

This was sent to me for review from Geekvape and you can get it from them for $21.90