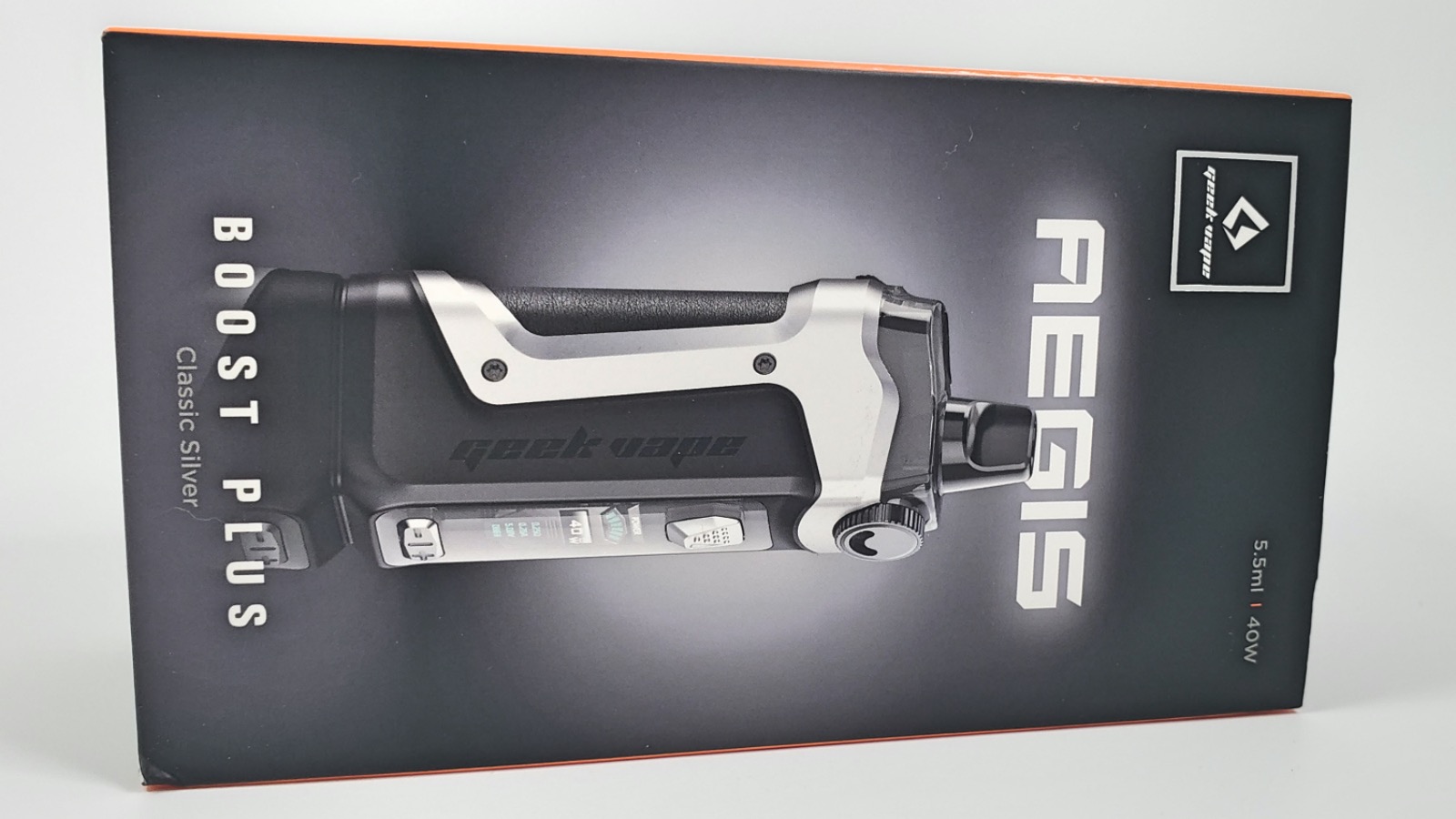 The Geekvape Aegis Boost Plus was sent to me for review from Geekvape (learn more about it here). The original Aegis Boost was really popular. It was a 40 watt device with shock and water resistance, an internal battery, and an optional RDTA coil. This new Plus model has all of those same features, the internal battery has been swapped for an external replaceable battery, the pods use Geekvapes new G.Coil coil heads, there’s an optional 510 adapter, and there are more colors available. You have your typical Aegis grip on the back. At the front of the device is an airflow control, a firing button, a colorful LED screen, and two up and down adjustment buttons.

There are several colors to pick from such as Devil Red, Space Black, Classic Silver, Gunmetal, Almighty Blue, and Aura Glow. The device turns off and on with five fast clicks of the firing button.

There are several modes to pick from:

You can also go into stealth mode, which turns off the screen but you can still vape. To do this, hold the power button and up and down buttons at the same time for three seconds.

And you can also change the theme. To do this, go into your settings menu first by clicking the firing button three times fast. Then hold down the up and down buttons at the same time. You can change the color of the text on the screen to blue, green, or red. The pods hold 5.5ml normally or 2ml if you’re in the UK. Geekvape says that they use ultrasonic technology to make their pods air-tight to prevent condensation.

The pods slide into the device and lock into place using a quick lock switch. To get the pod out, just push down on the quick lock and it’ll release the pod. The pods have a comfortable mouthpiece at the top which is shaped into a sort of duckbill shape. You can turn the mouthpiece in any direction so you can make it comfortable for whatever position you hold the device. If you don’t like this mouthpiece, there’s a round mouthpiece in the box too. The pods are top-fill, so you don’t have to deal with taking the pod out to fill it. Just pop open the seal on the top and fill it up. It’s really easy to access and use. There are two coils in the box: At 25 watts the flavor is okay but could be better. It’s very cool. The flavor doesn’t get much better at the max of 33 watts but it gets a little warmer. This seems like a good coil for higher nicotine liquids. This coil works much better at restricted airflow. Regarding flavor, it’s about the same as 0.4-ohm coil. It’s just okay at 15 watts and a little better at 25 watts. Performance between the minimum and max wattage is much different though. At 15 watts, this coil is great for restricted draws, high nicotine, and low vapor, while 25 watts is designed for a lung draw, lower nicotine, and lots of vapor. I like that this coil can do both. The airflow is controlled with a little dial on the pod. You can turn that to open or close however you’d like. We’re seeing this type of dial airflow on lots of pod systems lately and one thing that Geekvape did much better than other companies is that the airflow is on the same side as the firing button. That means you won’t accidentally cover the airflow while vaping. This was really smart.

The only issue I have with the airflow is that it’s a little hard to see how far the airflow is closed down depending on the light in the room, but it’s not a big deal.

Geekvape also makes two additional optional accessories for the Boost Plus. If you want to build your own coils, Geekvape sells an RDTA pod, which has an RBA deck built into it. Or if you want the freedom to use any atomizer you want, you can buy the 510 adapter, which basically turns the Boost Plus into a 40 mod. There are some drawbacks to having an external battery too though, especially in a pod device. Pod devices are great for all types of vapers but they’re particularly attractive to beginners. And for beginners, external batteries require a lot more knowledge about battery safety.

As always with Geekvape’s devices, the Boost Plus has an IP67 waterproof and dust-proof rating, which means it’s completely dustproof and it can be completely submerged in 3 feet of water for up to 30 minutes. The Boost Plus is also shock proof. There’s no rating mentioned, but it’s at least more durable than your average device.

This has been a really nice pod device. It’s light, it’s comfortable to hold, it has a lot of nice features, and it uses a replaceable 18650 battery. The airflow control on the pod works really well too. And the IP67 rating and shock resistance is great for durability. The only issue I really have with this kit is that the coils don’t have the greatest flavor output. But overall, it’s been a very nice kit.

The Geekvape Aegis Boost Plus was sent to me for review from Geekvape and you can get it from them for $42.99.