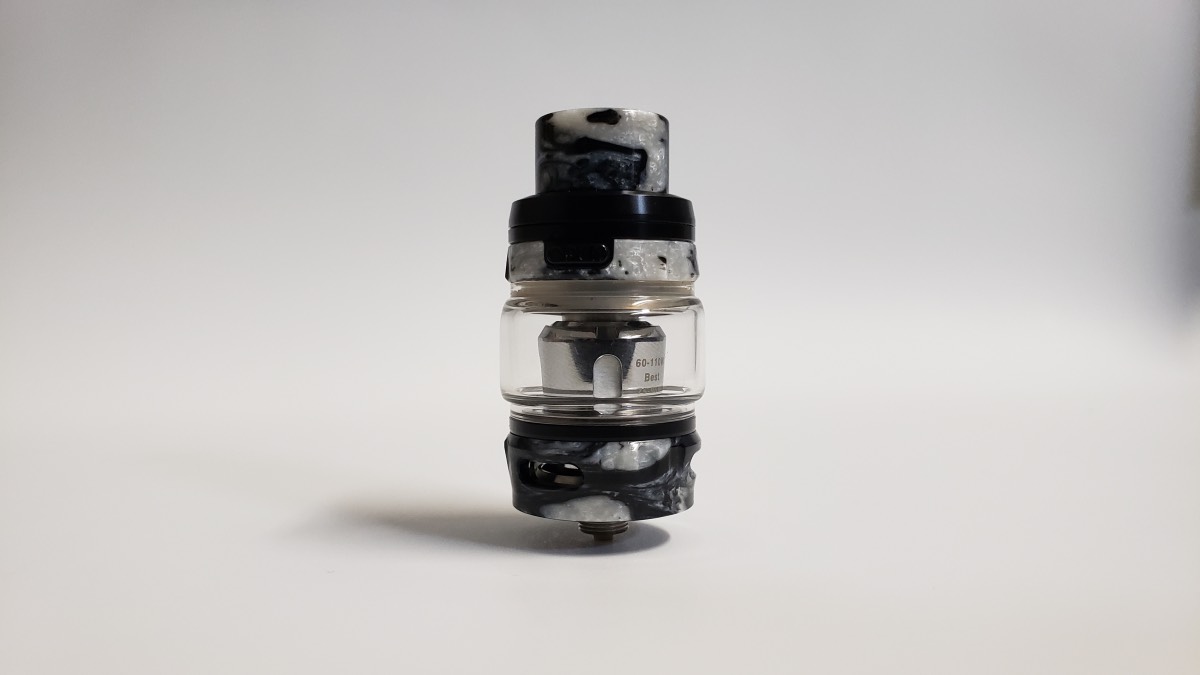 The Geekvape Alpha Subohm Tank was sent to me for review from HeavenGifts.com. This is a mesh coil tank that uses Geekvape’s new MeshMellow coil system, which they claim is a totally unique coil design and better than anything else on the market. The tank shape is pretty typical of most tanks, but one thing I like is the shape of the bubble glass. A lot of bubble glass tanks have such wide bubbles that they just look ugly. I’ve never been a fan of how any bubble glass looks, but Geekvape made this bubble glass a little slimmer, so I think it looks much better.

And the way the resin and steel colors work together is very nice. The drip tip, top cap, and base all have matching resin designs. There are five solid colors available too, if you don’t like resin.

I realize that it’s probably hard to describe the colors of resin products since there are several colors mixed in, but I just don’t think names like Ember, Twilight, and Flare are helpful. Those are the colors that Geekvape named these tanks. Basically, they have three stainless steel tanks made with red, blue, or mixed resin, and two black resin tanks made in either black or blue steel.

And all of the resin models match the resin designs of the Geekvape Nova device, so if you have one of those, this tank will match perfectly, but from what I’ve seen the resin on the tank is much glossier than on the device, so something to keep in mind. The resin drip tip is an 18mm wide 810 drip tip that looks nice and is comfortable to use. There are no o-rings on it, so it’s held in place with the o-rings inside the top cap. To fill up the tank, you press a little button to pop open the cap, kind of like a switchblade. It’s actually really cool the way it works. What I like the most about it is that I don’t have to guess the right place to push on the top cap to get it to open. Just push the button. It’s a very small feature that I like a lot.

Underneath the cap is a single fill port, which is also interesting because a lot of tanks often use two fill ports to prevent air pressure buildup in the tank while filling it, which can cause leaks later. But it doesn’t seem to matter here because I haven’t had any leaks while using this. The top cap has a wide seal to hold the glass tank to prevent leaks. The Benefits of Egyptian Cotton

Geekvape claims that their MeshMellow coils contain high-grade cotton imported from Egypt. That sounds special, right, but is it? So if you’ve ever boughten really expensive linen like bed sheets, you’ve probably seen products made with Egyptian cotton. Egyptian cotton really is a much higher quality cotton than from most other places, so it costs a lot more. It’s hand picked which puts less stress on the fibers, the cotton is longer, it’s more durable, and it has much finer threads, so it’s softer and more flexible. It’s also considered to have the highest purity, it can absorb more liquids, and it’s more porous than other cotton. This is all thanks to the climate in Egypt that allows cotton fibers to grow this way. Have I sold you on new cotton pillowcases yet?

So now you probably know more about Egyptian cotton than you ever thought you would. There’s no way of knowing what quality of Egyptian cotton Geekvape is using in these coils, but I think we can assume that even if it’s a lower quality cotton, it’s probably better than most.

Geekvape claims that their cotton is highly absorbent, 100% organic and sterile, has no artificial taste, uses no bleaching agents and has no hydrogen peroxide added. It sounds great. Alright, well lets talk about the other aspects of these new MeshMellow coils. They are mesh coils, so they are designed for high performance and lots of flavor. And they won’t let you down. Since mesh coils are able to fire extremely fast and over the entire surface of the cotton, they just work great.

There are two versions currently available: The MM X1 is a single mesh 0.2 ohm coil made with Kanthal metal. Geekvape recommends vaping these between 60-110 watts, but with best performance between 75-95 watts.

The MM X2 is a dual mesh 0.2 ohm coil made with Kanthal. Geekvape recommends vaping these between 50-80 watts, but with best performance between 60-70 watts. On the base, you’ll find the airflow control ring. It’s moves left and right smoothly and stops at each end. There are three 10mm airflow holes here, so you get a lot of airflow. There is a little restriction as the air passes through the coil heads, but you still get a lot of airflow if you want it.

Flavor From The Geekvape Alpha

Both coils produce amazing flavor. I tend to get more flavor out of the dual coil head but both are great. So if you’re looking for flavor, you’ll get that in whatever your preferred wattage is.

That’s it for the Geekvape Alpha Subohm Tank. It looks great and the flavor is amazing. I like the button on the fill cap too. The only drawback really is that the tank only holds 4ml, which is decent, but if you chain vape, which a lot of people do with tanks like this, you’ll be filling it up a lot. But yeah, this is an awesome mesh coil tank.

This was sent to me from HeavenGifts.com and you can get it for $29.99