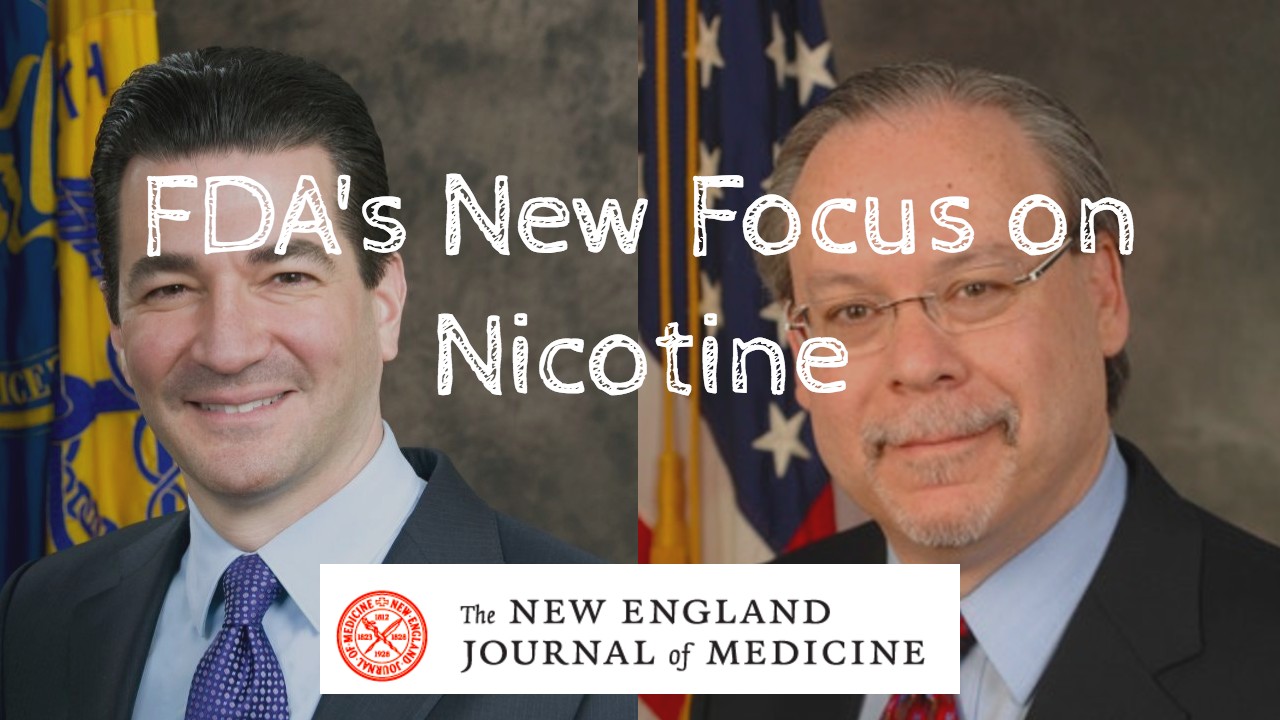 Scott Gottlieb and Mitch Zeller recently published an article in The New England Journal of Medicine further discussing their plans for focusing on nicotine in the Center for Tobacco Control’s new regulatory framework.

They say many of the same things Gottlieb and the FDA have already stated, like that their two primary goals are; 1) to reduce the addictiveness in combustible cigarettes and 2) to recognize the role that less harmful products can play in improving health.

This journal article mentions that while nicotine is responsible for getting people addicted in the first place, it’s also not directly responsible for cancer, lung disease, and heart disease. But it’s an issue nonetheless and why it’s the centerpiece for their new direction.

They also stressed the importance of giving medicinal nicotine products a larger role in helping smokers to quit. This is a really interesting subject that I wish they would expand on. They keep talking about it, but haven’t really said much about it. I’m wondering if they are considering allowing electronic cigarettes to be classified as a smoking cessation aid.

Now here’s something interesting mentioned in the article. Gottlieb and Zeller point out that the Tobacco Control Act gives the FDA the authority to alter the addictiveness of combustible cigarettes. This is called the tobacco product standard. The FDA can set standards for composition, construction, or any ingredient in a tobacco product, including the nicotine levels. The one thing the FDA can’t do is require that nicotine levels are zero.

The FDA is considering performing studies on maximum nicotine levels and the use of very-low-nicotine cigarettes. They also talk about exploring adverse effects of setting these standards, for example, if smokers instead smoke more cigarettes to get the nicotine they desire. They point out that there are recent studies showing that smokers don’t end up smoking more, but that it’s still something that needs to be studied more. This is a big issue I’ve seen a lot of people talking about in the last couple of weeks, so it’ll be interesting to see what further research shows.

Then the article turns focus towards harm reduction. They discuss the potential of improving the speed of delivering nicotine with FDA-approved nicotine products. And of course, the use of electronic cigarettes, which they say could conceivably deliver nicotine without the harms associated with combustible tobacco. The FDA plans to invest in science to help them understand the full risks and benefits of using electronic cigarettes.

So yeah, not a whole lot that hasn’t already been said, but a few new little interesting takeaways.

And going back to the topic of the FDA requiring that cigarettes lower their nicotine levels. I received a great comment from one of my subscribers, Tommy Krynock that asked if tobacco companies lower nicotine levels, would it be considered a new product and would it have to go through the premarket tobacco application (PMTA) process. I don’t see why they wouldn’t because it would be a different product. Or maybe they can submit a modified risk tobacco product (MRTP) application. And what’s also an interesting question is that if the FDA requires that all tobacco products lower their nicotine, tobacco companies would need to submit applications for all of their products, whether they want to or not. And would those applications be approved by the FDA? This could be a pretty big blow to the Big Tobacco industry.