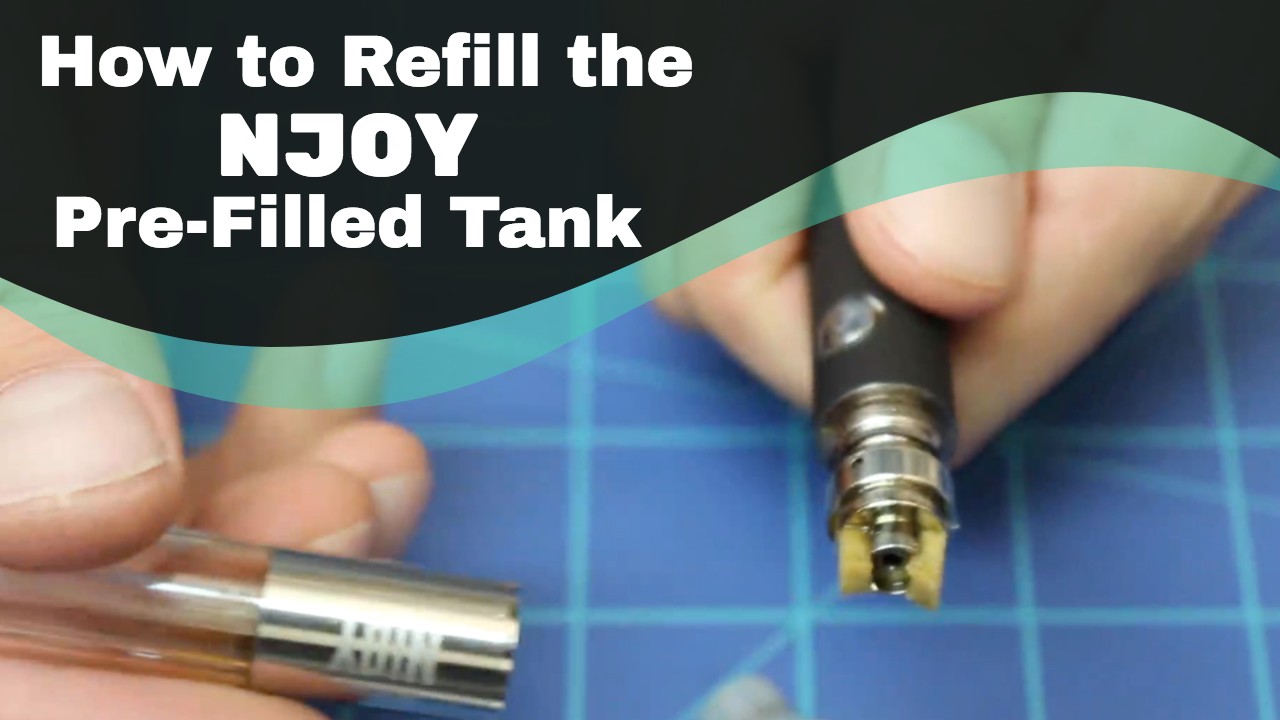 A while ago I did a review of the NJOY Convenient System, which is basically NJOY’s vape pen kit and it’s one of my most popular videos ever. I think it’s because it’s a beginner setup that’s extremely accessible since you can find it a Walgreens and 7-Eleven.

In my original review, I mentioned that other people online have said that they’ve been able to take the pre-filled cartridge apart and refill it. I’ve tried many times to get it apart with no luck, but this weekend, I was determined to do it, even if I had to break one to see how it was put together. And I’m happy to say that I figured it out and have now done it on three tanks.

So let’s take a look.

Seperate The Tank From the Base

NOTE: Watch the video above for a demonstration

From what I read online, people have said that you should put the tank on the device and rock it back and forth while forcefully pulling upward. That part is true, but I’ve found that it helps to get the separation process started with some pliers first.

That inner part of the tank that screws onto the vape pen is glued to the tank. I wrapped some paper towel around the metal part of the tank so that I wouldn’t scratch it and held it tight while turning the plastic part of the tank really hard with my hands. That seems to loosen up the glue a bit. You don’t have to use a paper towel if you don’t care about scratches. Some rubber coated pliers would probably be even better for this but I don’t have any.

When you have that part done, screw it back onto your device. At first, I was worried about damaging the vape pen by pulling so hard on the tank, so I put it on top of an old mech mod with an ego adaptor on top. But after getting the hang of the process, I don’t think that’s necessary. But if you do have an old device that you could use for this, I’d recommend it because over time you might damage the vape pen. But who knows, maybe you won’t.

Anyway, pull up with some force, rocking it back and forth, and it’ll pop right out.

I don’t think you’ll be able to refill this without some blunt tip syringes, which you might have if you ever make DIY e-juice. It might also be possible to use a glass dropper tip to push e-juice into the tank, but I didn’t try it.

Once it’s filled, push the base back into the tank until it sits completely flush on your device again. You’ll probably want the wicks to sit directly next to one of those wicking holes, but I really don’t know if it matters.

And that’s it. It should be good to use.

I have a couple of things to note after doing this. First, I don’t think you can do this indefinitely. One of the tanks I did this with eventually got really loose. When I screwed it onto the device, the tank started to spin separately from the tank base, so I would worry about the tank coming apart in my pocket.

Another thing to note here is that NJOY uses a very high nicotine salt e-juice, I believe 48mg nicotine, so if you don’t have high nicotine e-juice, it might not be as enjoyable to you. It’s important to note that they use nicotine salt based e-juice too, which lets you vape high-nic e-juice without the harsh throat hit. So if you find that after refilling it that you don’t like it as much, consider buying some high-nic salt e-juice.

For anyone who really wants to nerd out, I also fully tore down the base. Watch the video above to see it in all of its glory.

There’s a plug in the bottom that holds in the positive pin. That pops right out. And the coil is a single-spaced vertical coil surrounded by two pieces of wicking material. It looks like cotton to me, but I don’t know for sure.

I also don’t know what the coil wire is made from, but I did a little detective work. I compared it to various different wires and I’m pretty sure it’s 30 gauge wire. The inner diameter is 2mm and it has about 7 wraps with one short and one long lead. And If you put these tanks on an ohm reader, they read 1.44 ohms. So using an ohms law calculator it looks like this could be either Kanthal or Nichrome N80. It’s definitely not stainless steel or nickel. I’m leaning towards N80 based on the specs.

I only mention all this in case you’re wondering. I think this tank would be way too hard to rebuild with a new coil, but I know some of you out there are up to the challenge. Personally, I’d rather go out and buy a new one. 😉

Alright, that’s the pre-filled tank from NJOY. Finally! I hope that helps some of you out.