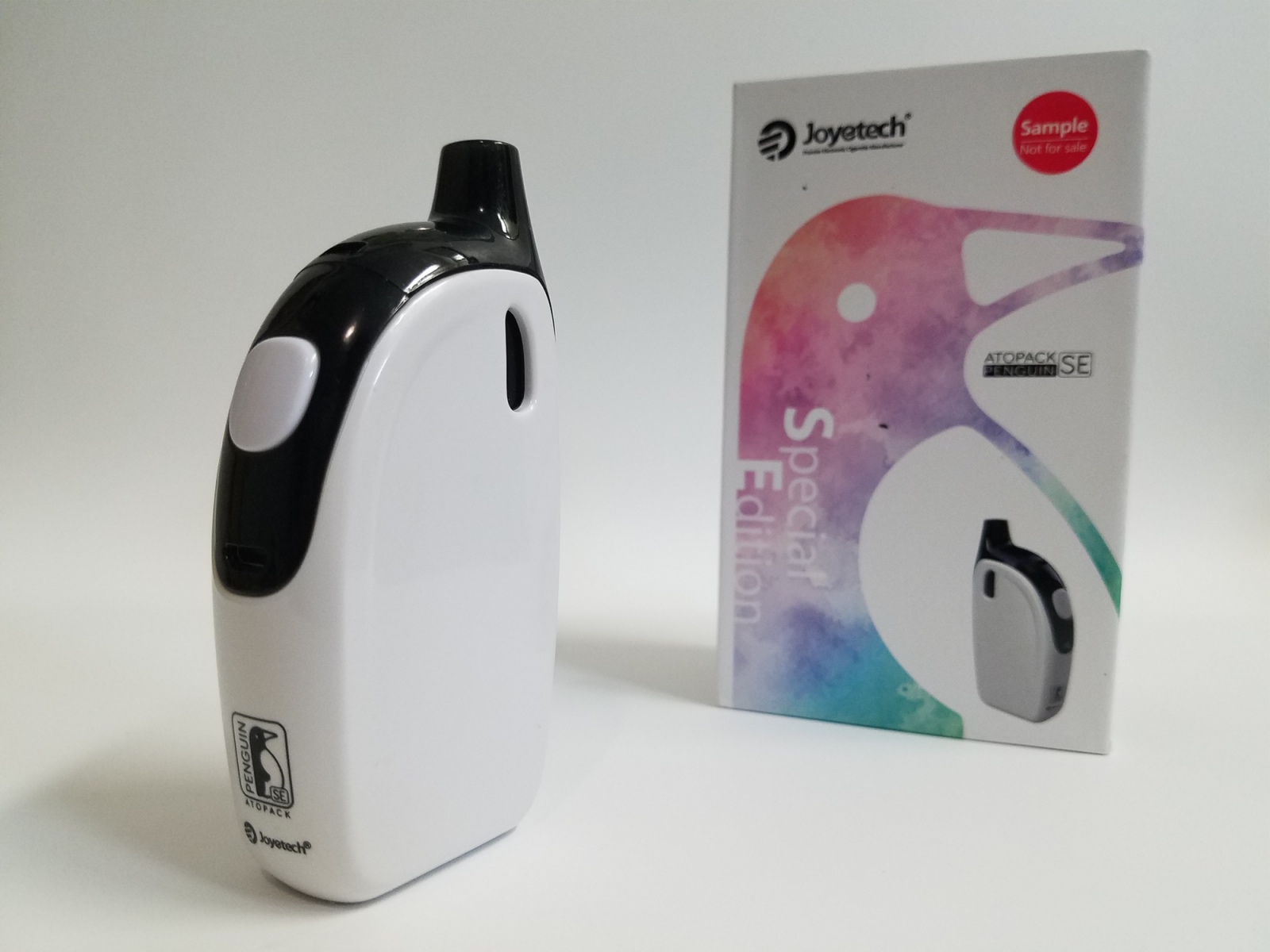 BuyBest.com sent the Joyetech Atopack Penguin Special Edition to me for the purpose of this review. I know this is an older device that’s been around since about August 2017, but BuyBest gave me a choice of about 10 other products, some much newer than this, but the Penguin has been something I’ve been wanting to pick up for a while due to all the positive reviews it gets, so I requested this one.

The Penguin is just a simple all-in-one device designed for beginners or people looking for ease-of-use. There are no wattage adjustments or airflow adjustments.

First, what makes this the Special Edition is that it’s lighter the original because it’s made of plastic, and it comes in more interesting colors. BuyBest sent me the basic white and black model, but some of those other colors are really crazy. The SE model also has these e-juice windows on the sides. My first thought when seeing this is that it just looks terrible. It’s not a great looking device. It was designed after a penguin after all, which is not an elegant animal.

It’s bulky, clunky looking, and it’s all plastic. But that’s just my opinion!

Don’t let the looks of it dissuade you from buying it, because it’s the functionality that really matters. And despite the bulky appearance, it’s actually very comfortable to hold.

How the Atopack Penguin Functions

Five clicks turns it on, and five turns it off. It’s as simple as that. There are no other functions or settings available.

I’m not sure how many watts this pushes to each coil, but from what I can find online, the device itself pushes a max of 50 watts. This is a direct output device, so the wattage you get will reduce as the battery power decreases, but it’s hardly noticeable at all.

You won’t get a hot vape out of the Penguin. It’s more of a cool to slightly warm vape.

It fires really fast and there’s no delay whatsoever. You just hit the button and that coil gets going. It’s impressive!

The battery is designed to charge at a 2amp max current, so it charges pretty fast. It’s also a 2000mAh battery, so it’ll hold charge for a decent amount of time.

If you want to see the battery level, click the firing button once. There are five LED dots on the screen that indicate the charge.

Right below the firing button is a mini-USB port, which is how you charge it. Since this is an internal battery mod, you need to plug the USB cable in to charge it. I recommend charging it with a high-quality USB wall adaptor, but Joyetech says that you can charge it using your computer USB port too.

The Penguin comes with two coil heads; a mouth-to-lung coil and a direct lung coil. You’ll see that they’re clearly labeled on the back of each coil. This is nice because you can pop out the cartridge at any time and see what coil is installed. On the bottom of each coil head are two metal connectors, which connect to the device. And these coils are cased in ceramic. They’re pretty heavy duty.

If you put the coils side-by-side, you’ll see that they’re almost identical, except that the inner diameter are different.

The way the coils work is that airflow comes in through a little slot on the side of the cartridge opposite of the mouthpiece. The e-juice is fed into the coil from the top of the coil head, which appears to be cotton.

And both coil heads are using single vertical coils, built in parallel and surrounding by organic cotton. These coils have this little ledge that you can use to pull them out of the silicone piece when you want to change them. The way to remember which side to grab is that the ledge is on the side with the mouthpiece. The Mouth To Lung coil head is built at 0.6 ohms. The inner diameter is 2 millimiters, so it’s tiny and it’s how this coil gets so much restriction.

The big problem with this coil head in my experience is that it isn’t actually mouth-to-lung. You can’t get a really tight draw from it. It is a very restricted lung draw though. But this one definitely needs more restriction to be called a mouth-to-lung coil The direct lung coil head is built at 0.25 ohms. The inner diameter is just a little more than 3.5 millimeters, so it’s a big one. While this is a direct lung hit coil, it’s still a little restricted, but this isn’t designed to blow massive clouds, although it does still put out quite a lot of vapor. The cartridge holds a massive 8.8ml of e-juice, so you won’t have to fill it up often. There’s also a 2ml version for those of you in the UK dealing with TPD restrictions.

To get the cartridge out of the device to fill, just push out towards the back of the device and it’ll pop right out. It has a little restriction, but don’t worry, you won’t break it.

If you look at the Atopack where the cartridge sits, you’ll see two metal contacts at the bottom, which is how the device fires the coil. There’s also a metal plate, that connects the internal battery when the cartridge is installed. If the cartridge isn’t installed completely, the lights on the screen will blink and it won’t fire.

There’s one drawback here. If you get e-juice in this cartridge space, it can be a little tough to clean out.

There are little windows on each side of the cartridge letting you see how much e-juice is in the tank. The stickers on each side also tell you how many milliliters are in there. You can see that one sticker has blank spaces so that you can label the e-juice if you want. I guess that’s useful if you only vape a few flavors and you have several cartridges laying around, but that’s not something I’d ever use. It reminds me of how how blank VCR or cassette tapes had labels that nobody would ever use!

And you can see that Joyetech did mention that the cartridge is made of PETG and Silicone. That’s plug at the bottom is the silicone part and the rest is PETG plastic.

The first time you use the cartridge, you’ll find a plug in the bottom. Pull it out and save it in case you ever need it. This is where you fill it up with e-juice. Make sure you fill it up in the middle hole, not the one on the side, otherwise you’ll have e-juice pouring out of the mouthpiece. This silicone piece comes out too, which I think is designed to do so that you can clean it, but you have to be careful because there’s a little o-ring that will fall out and a little metal plate on the side that will also fall out. Just remember where those parts go if you take the silicone out. I’m not really sure what the metal piece does because it doesn’t seem to connect to anything. It might just be to keep the silicone piece in place or help create a good seal.

Once you have the tank filled, pop one of your coils in and let it sit for 5-10 minutes so that the coils can soak up the e-juice before you fire it. You can speed up the process by sucking e-juice into the coil with the airflow hole closed, but you might flood it and get e-juice in your mouth for a few hits, if you just can’t wait.

Then you just slide the cartridge back into the Penguin and you’re good to go.

And if you ever need to store the cartridge, Joyetech included a silicone cover so that you can close it up and not have to worry about it leaking. The Flavor From the Atopack Penguin

The flavor doesn’t blow me away, but it’s actually pretty good. The flavor from both coils are good, but the mouth-to-lung coil does seem to have a little bit more flavor. But for me the restriction of the MTL coil is too much, so I made the trade-off in a little less flavor for the more wide-open airflow of the direct lung coil

This also comes with a silicone mouthpiece cover. I’m not really sure what the purpose is because it doesn’t get hot or anything, but then again, I vape regularly. Maybe it does feel a little hot to beginners, so it’s cool that they included it just in case. My Final Thoughts on the Atopack Penguin

BuyBest gave me the choice of about 10 different products to review and even though this one is a little old now, I chose it because I’ve heard so many good things about it that I just had to try it. Based on the simplicity and the looks of it, I found it hard to believe, but it actually is a great device.

I do wish that it looked a cooler and I would have liked for the mouth-to-lung coil to be more restricted. But the Atopack Penguin is just so easy to fill and use, I can chain-vape it without getting a dry hit, and the flavor is good, so this one is a win in my book. It’s perfect for a beginner and it’s great for someone just looking for ease-of-use.

If this looks like something you’re interested in, you can get it from BuyBest.com for about $27 and they do have free shipping for orders over $20, so that’s a nice plus.