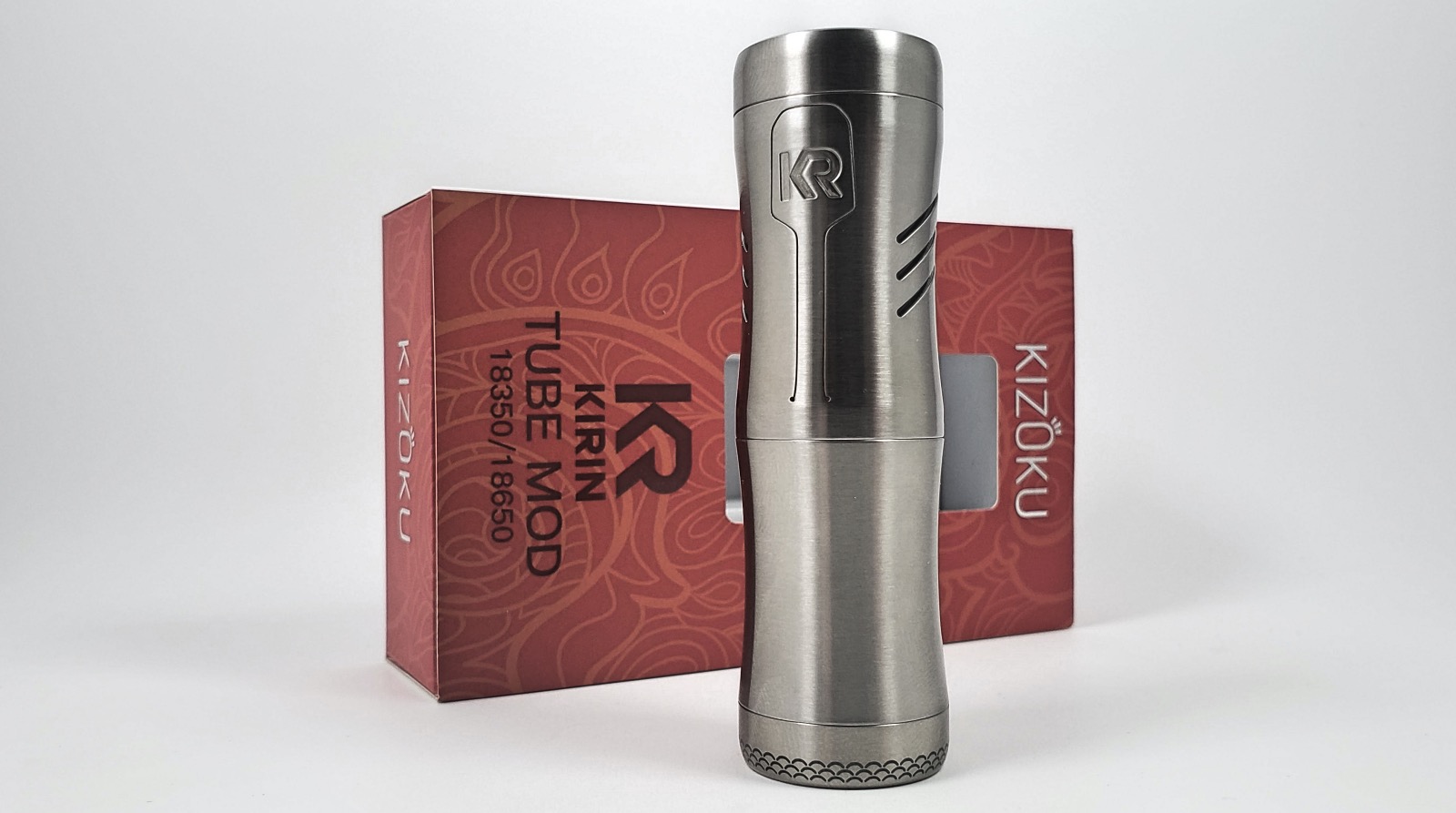 The Kizoku Kirin Semi-Mech tube mod and the Kirin disposable tank (affiliate) was sent to me for review from HeavenGifts.com.

There’s a lot of names mixed into this brand. I believe that the parent brand is Vape Only, the brand under that is KizokuTech.com, and this particular line is Kirin. And I don’t know the relationship between Heaven Gifts and Vape Only, but they’ve been sending me a lot of stuff from Vape Only recently. Not that it matters, it’s just something I noticed.

The Kizoku Semi-Mech Tube mod is a pretty interesting tube mod kit. It’s described as a semi-mech tube mod, and I think some of the old-school vapers might understand why, but first, let’s talk specs. The Kirin tube mod looks great in my opinion. It’s sleek and looks like a high-quality tube mod. The firing button is integrated into the design so it’s practically flush with the rest of the tube. As far as looks go, it’s top-notch. And you can use this in two sizes. The Kirin tube mod comes out of the box in its miniature 50mm size, which is only about 2 inches tall. It’s super tiny. This is the size where you would use a small 18350 battery. You won’t get a ton of life out of a 18350 battery, but a good 18350 battery can be rated at 1000mAh, which is much more battery life than you would get from a pod device, so really, 18350 is pretty good, especially if you’re using the Kirin with the included MTL tank because you don’t need to take big hits. Also in the box is an extension that you can add to the tube to make it longer so that it can fit your typical 18650 battery. The extension is 32.8mm tall, so that will make the device about 83mm or 3.2 inches tall. All you do is take the battery cap off the bottom, screw the extension into the middle and then add the cap back. If you look into the tubes, you’ll also find plastic sleeves. I think this serves two purposes, one is to prevent the battery from touching the metal in case there’s a tear in the wrap, but also because it prevents the battery from rattling around. If you’re familiar with mech tubes, you’ll be familiar with how batteries can differ in lengths by just millimeters. That’s why a lot of mech mods have adjustable buttons to tighten the contacts down so that the battery is tight and makes good contact with the positive and negative contacts.

The Kirin mod has the adjustable button too. If you take the battery cap off, you’ll see threads that allow you to adjust the negative contact or even remove it entirely.

Because the Kirin doesn’t use springs for the contacts, shorter batteries won’t be able to make contact with the device when the negative base is screwed all the way to the bottom. Or if it makes contact, there might be a lot of battery rattle. So to fix those issues, you just need to screw the negative in so that it pushes up against the battery.

It’s simple and easy to do, but my main complaint with this process on the Kirin is that the negative plate a little difficult to tighten while it’s on the device. That means you have to take the cap off, turn the plate just a little, then try it again to see if it’s tight enough. It might take several tries. Kirin should have done a much better job with the threading on the cap.

Ok, so let’s talk about how the Kirin functions. To turn it on, press the firing button five times fast. So obviously, this is not a mech mod. But it’s been described as a semi-mech.

So here’s why I think that is.

If you look down into the 510, you’ll see a chip in there. But this doesn’t look like a typical regulated device chip. This actually looks like a “kick”. For any old school mech users out there, you might remember what a kick is. Kicks were chips that allowed you to adjust the wattage or voltage you wanted your mech mod to output. You would drop the kick down into a mech mod on top of your battery and then screw the 510 down over it. So a kick would essentially regulate the wattage that your mech mod would deliver to the atomizer, but wouldn’t provide any other safety features – A lot like how the Kirin works. So I’m not positive, but that’s what it looks like has been built into the Kirin.

As for performance though, the Kirin performs very well. It fires extremely fast and just works great for every hit. It’s comfortable to hold too and in both sizes. I really like using it. The Kirin MTL Disposable Tank comes with the kit, but it comes in its own box so you might be able to purchase it separately too. This is a disposable tank, but it seems almost as high quality as a regular MTL tank. Starting at the top is a nice 510 drip tip with a concave shape for comfort. For this being a disposable tank, I’m really surprised that they included a drip tip of this quality and even that they made it removable. The tank itself is the only part that seems disposable. It’s a plastic tank that holds 2ml of liquid and is refillable from the plug at the bottom. This screws into the metal base.

Metal Base and Airflow The metal base has a built-in airflow adjustment ring with two airflow slots. You can adjust the airflow in a couple of ways. You can close off one of the slots and move through tiny airflow holes on the other side. Or you can keep turning the ring to open up both slots with wide airflow slots on the ring. The airflow options work really well and give you a pretty big range to choose from. Wide-open and you can get only a decent lung hit. The flavor from the disposable tank is pretty good. I do think there might be some quality issues with the coil though or it’s just not fine-tuned enough to work with the Kirin tube mod. I got about halfway through the tank and it started to taste burnt. It’s built at 1.2 ohm and is rated for 8-12 watts, but since the Kirin tube pushes a constant 3.5 volts, that means the tank is getting about 10 watts. It should be working fine at 10 watts, so I think it needs a little work to be able to handle 12 or more watts consistently. But when it wasn’t burnt, it was actually a really satisfying MTL experience. I really like the Kirin mech tube kit. It looks great, it can use 18350 or 18650 batteries and it fires super fast. There are some things that bring the quality score down for me though, For one, the threads just aren’t very good. They feel a little crunchy when screwing the parts together. Also, the battery size adjustment cap at the bottom sticks and is really hard to turn while it’s on the device. The firing button is hard to find if you don’t look for it too, but that’s a little nitpicky because it’s also really nice that it is so flush with the body. So pros and cons. But overall, this is a very cool kit that I’ve been having fun using.

The Kizoku Kirin Semi-Mech tube mod and the disposable tank (affiliate) was sent to me for review from HeavenGifts.com and you can get it from them for $46.20.