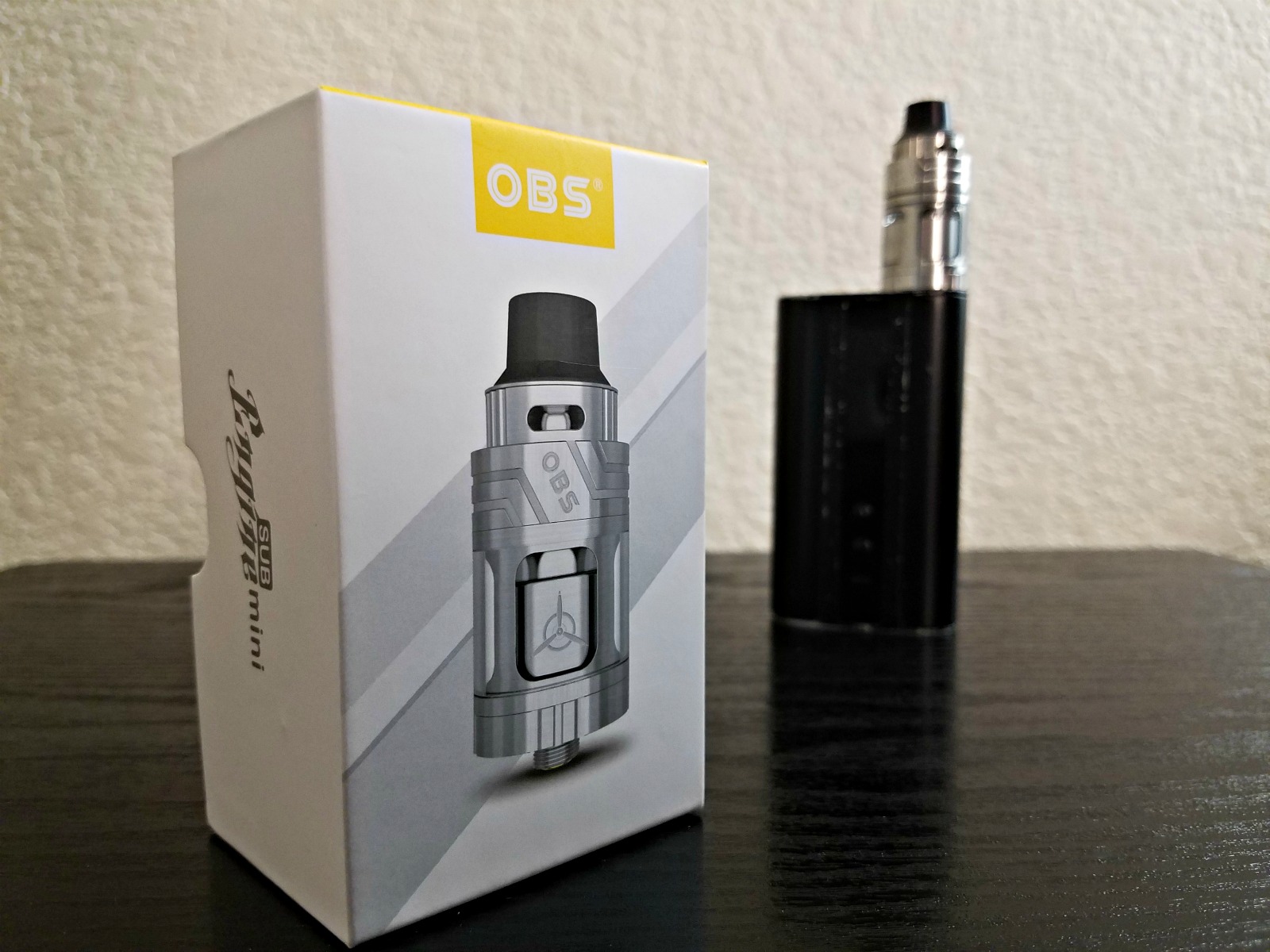 HeavenGifts.com sent me the OBS Engine Sub Mini for the purpose of this review. This is a 3.5ml tank. You can get it in either silver or black and it costs $30.

OBS released two versions of this tank – the full size is a 5.3ml tank and the mini version is a 3.5ml tank. See my review for the full size version here.

In the box you get the atomizer, a spare glass tank, two coil heads, a user manual, and some spare o-rings.

The tank is made of 304 stainless steel. It’s 23 millimeters in diameter and stands at 54 millimeters tall.

Because this tank is top-filling, it’s practically leak proof. It can’t leak from the airflow holes because the airflow holes are at the top. Even when turned upside down, it’s not likely to leak due to the way the chimney closes the coil off from the e-liquid in the tank.

The OBS Engine Sub Mini has a unique airflow circulation system where the air comes in through the top, goes into the coil head, and then comes back through the middle through the chimney.

The top cap and chimney are one single piece. It’s quite sturdy and well-built.

The drip tip is made of POM and has pretty good sized holes for airflow. I like that it has two o-rings on it, making it very secure and less likely to fall out of the tank. The top cap drip tip hole uses a standard 510, which means you should be able to fit any other 510 drip tip you might have.

The airflow ring is stiff and a little hard to turn but I like it because I hate when my airflow control ring moves out of place in my pocket. The airflow holes are pretty big, so they accommodate the preferences for most vapers.

There is a thin metal cage that the glass tank slips over. The cage is lightweight, but strong, which is nice for keeping everything together while the light weight prevents the tank from getting too heavy.

The cage is a little difficult to line up on the threads but once they’re on there, it feels nice and tight.

The base is also very light and thin, but like the cage, it seems to be sturdy. The base has a gold-plated 510 pin that doesn’t stick out very far. It’s not spring-loaded, but if you push it hard enough, it’ll move. That’s not an issue, just something I want to point out.

The coil head screws directly onto the deck. The large flat metal plate on the bottom of the coil head makes contact with the 510 pin. The coils have an extremely large diameter and allow for a large amount of air to flow through them. They are 0.2 ohm coils and handle 40 to 100 watts.

In my experience, both coils perform best around 65-85 watts. At around 100 watts, they seem to put off a strange flavor, which could be because they are being pushed to their limits.

The fill holes are covered by a ring that slides up and down. It pops right up when you want to fill the tank and slips into place to block the holes from leaking. The ring is tight enough that it won’t open accidentally in your pocket.

The fill holes are nice and big, which makes this tank really easy to fill up. You can probably fill it up with just about any type/size of e-liquid bottle you have.

This mini version looks practically identical to the larger model except for the width (see my review for the full size model). The increased width for the larger model simply allows for more e-juice.

The height of the tanks are pretty much the same.

3.5ml is not a lot of e-juice, so you can expect to fill up the mini often. That’s not a problem for me, but might be for you. I personally don’t mind.

In my video review, I mentioned that I noticed that I was getting more flavor out of this smaller model than I did out of the full-size model. I thought it could’ve been because it’s more compact, allowing it to hold in the flavor, but after taking the tanks apart and comparing the pieces, there’s no reason for one to be better than the other because the dimensions are identical. So it could be that the coil I had in the smaller model is just a little better than the one I had in the larger model.

It’s a decent tank that performs pretty nicely at around 60 or 70 watts. The new clapton coils improve on the flavor quite a bit compared to the original notch coils but it’s still not as flavorful as I would prefer. I actually really liked everything about this tank except for the coils. I think the lack of flavor has something to do with the way that airflow moves through the wide open area of the coil head.

I hope that OBS keeps working on these coils because this is a tank that could be awesome.