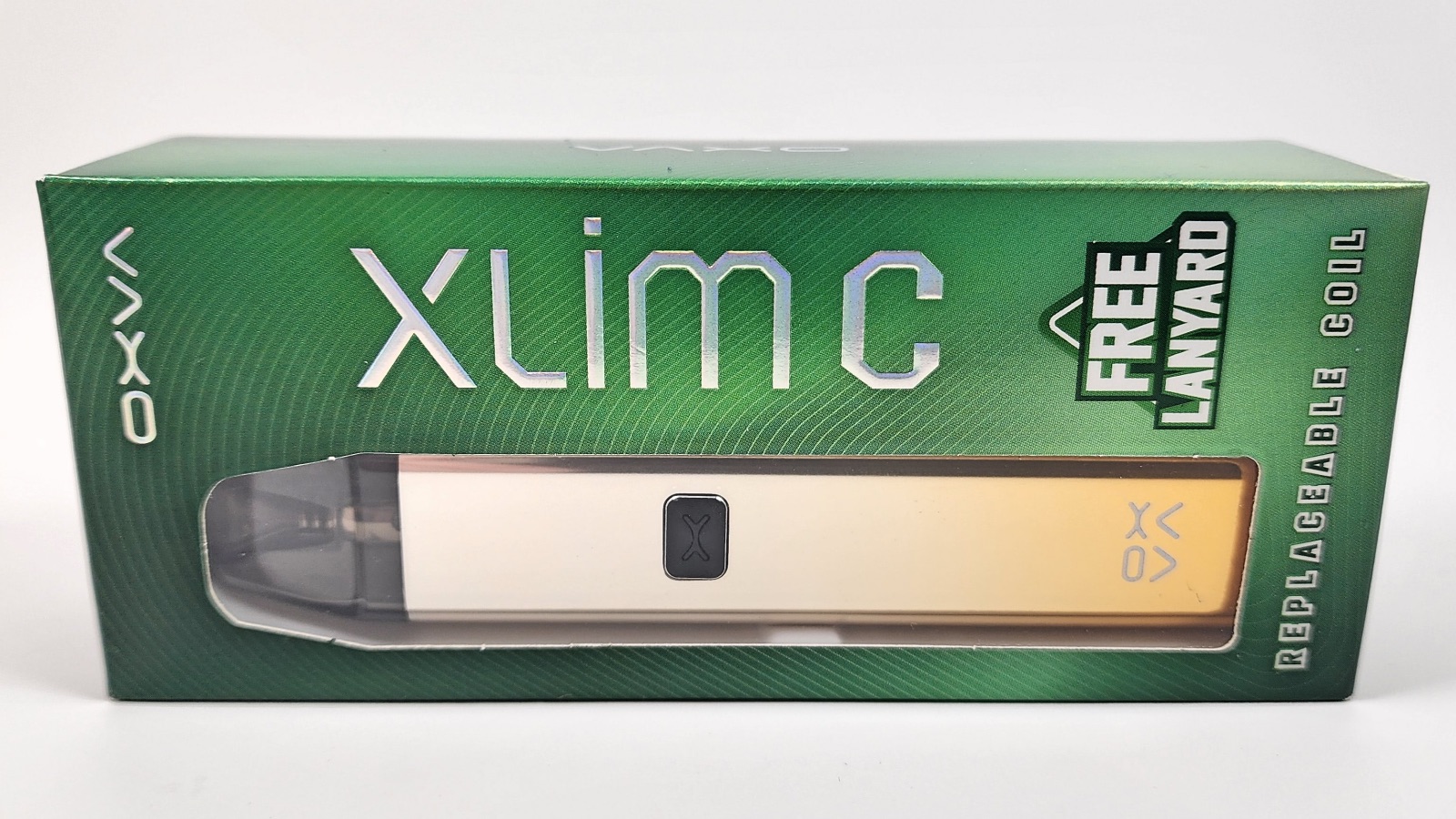 The XLIM C Pod vape kit was sent to me for review from OXVA. It’s a slim and sleek pod device with adjustable airflow, adjustable wattage, and a big internal battery.

The XLIM C Has a Modern, Rounded Design

This is a stick-styled device using the same design styles as the other products in the Xlim line. The aluminum body is sleek and rounded on the edges. The button on the front panel has an X etched into it, and the button is accented with a metal outer ring. There’s some OXVA branding on the bottom of the device and some on the side as well. There’s nothing on the back of the device. I think the device looks good all around.

It comes in a lot of different colors:

The XLIM C activates with either auto-fire (so when you take a hit), or button-fire. Both features are always on, so you can use whichever mode you prefer.

It fires quickly; as soon as you take a drag, so that’s good. There doesn’t seem to be a loss of suction or anything, like what’s common on many auto-draw devices like this. The firing button hits pretty much just as well as the auto-draw hits, which I think is good, so you can really use either mode and be happy with it.

The XLIM C also has some degree of wattage adjustment. You change the wattage by pressing the firing button three times fast while the device is on. You’ll see the color on the firing button change when the setting has been switched. There are three levels to pick from. I don’t know the exact wattages, but there’s a high, medium, and low. The manual also doesn’t describe which color aligns with which strength, and after going through them, they all seem so similar to me that I can’t tell the difference. But I’m guessing the green is high, the blue is medium, and the red is low.

With the airflow closed all the way down, you can’t really take a hit because it’s too tight. And I think this is actually a good thing for MTL (mouth-to-lung) vapers because that means you can just open it slightly more to get as tight of a draw as you like. The airflow switch is on a slider, so you can adjust it in tiny increments. With the airflow fully open, the draw is a loose MTL – maybe even a very restricted lung hit. It reminds me of the airflow on the SMOK Nord.

The lanyard that comes with the Xlim C is pretty nice. It’s fairly thick, at least compared to lots of other lanyards that get packaged with vape devices. And it feels like high-quality material.

You get two coils in the package; a 0.8 Ohm and 0.6 Ohm coil. These will give a good idea of both ranges of vaping here. The 0.6 Ohm is better for bigger draws and regular nicotine, while the 0.8 Ohm coil gets you closer to higher nicotine and tight draw vaping. But if you really want to do tight-draw hits here, they also make a 1.2 Ohm coil, which you’d have to buy separately.

The Xlim C comes with one reusable pod and two coils. You’ll only need one cartridge unless you break it somehow or if you want to swap flavors regularly, in which case you could order extras. But you will need to buy new coils to keep using this. I think it’s great that they chose to use replaceable coils here instead of building it all into a single pod. Just a little less waste is always a good thing. And plus, that brings down the cost of replacements too.

The coils are press-fit, so you just push them into the pod. There’s a flat edge on one side of the coil, which you match up against the little arrow on the bottom of the pod. You’ll definitely want to make sure the coil is fully inserted and sealed before you fill it up.,

You fill up the pod by opening the little flap on the side. Just fill it up and make sure that the flap is sealed tight, and then you can drop the pod into the device. It holds strong with a couple of magnets. If it’s the first time using the coil, you’ll want to let that sit for about 5 minutes before you vape.

The XLIM C has a 900 mAh battery. That’s a big battery for such a tiny device. Unless you’re chain-vaping this with the RDL coil, this should last a full day or more before you need to charge it.

There are a lot of good things going on with the XLIM C. It looks great, it feels durable, and it has great adjustable airflow. Both auto-draw and button-draw firing options work great too. I also really like the flavor from the pods, and the coils that OXVA used in these pods perform really well.

The only thing I think could’ve been better is the adjustable wattage settings. I think the differences should have been a little more significant because I can’t really tell the difference between them. It’s nice that they have that feature, though.

Overall, I’m a big fan of the XLIM C. I really like it.

The XLIM C was sent to me for review from OXVA.