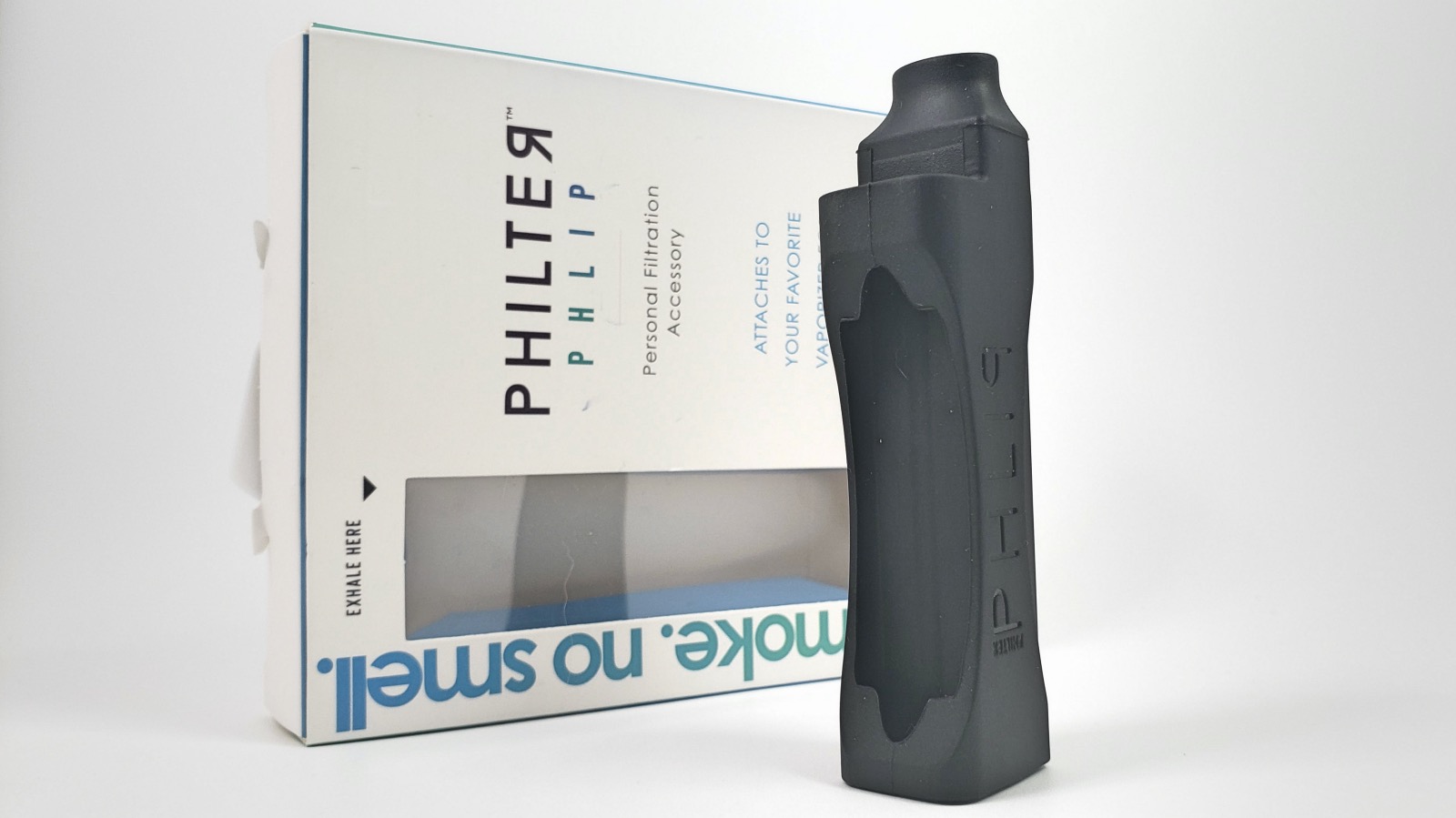 The Philter was sent to me for review from PhilterLabs.com. Get them here (affiliate). The Philter is a personal air filter that you blow vapor through to remove it from the air. It works for smoke too. If you’ve been in the vape game for a while, you might remember a couple of years ago when sorta similar products were getting a lot of promotion on vape channels, like the Sploofy or Smoke Buddy personal smoke filter. But those things are enormous. I’m sure those are perfectly air purifiers for home use, but you’re not going to want to carry those around, so the small compact design of the Philter vaporizer filter is much better for taking with you on the go.

There are two types of Philters; The Philter Phlip and the Philter Pocket. The Phlip is designed to work specifically with popular pod systems like the Juul, Stiizy, Pax Era, Rubi, and G Pen Nova. Other devices might fit in it too, but it needs to be small. Little round cigalikes fit in here too.

The idea behind the Phlip is that you can insert the device into the product so that you can take a hit on one side and then flip it around to blow the vapor through it. That way you don’t have to hold two different things in your hand. It’s a really cool idea. The Philter Pocket is what you would use if you’re not using a vape pen, for example, if you’re using a larger mod. It works the same, but you can’t connect anything to it. You take a hit from your detached mod and blow through the Philter to hide the vapor.

The Pocket comes in grey, black, or sky blue casing and costs $14.99. The Phlip comes in the same colors but costs $29.99. The filter refills come in three different colors; gold, chrome, and rose gold and those cost $29.99 for a pack of three. One of the best things about the Philter is that it looks really nice. It has a modern and clean look to it and it’s not going to draw a bunch of attention to it. It has a very nice design.

It’s also made of silicone, so it’s durable, heat-resistant, and it won’t leach plastic chemicals.

How Does it Work The Philter uses five stages of filtering, which they call Zero 5 Technology;

The only part of that five-step system that I understand is the last two; particulate treatment and odor reduction. And that’s because the vapor is going through activated carbon, which is what you’d find in a lot of full room air purifiers. So that part makes sense. I have to be honest, the other phases, like the kinetic energy multiplier, sound a little “woo-woo” to me, but hey, I’m no engineer and I didn’t design this. And it works, so that’s what really matters to me. They say that this system is the first to use a nanofiltration process filters both secondhand vapor or smoke and also dissolves particulates, pollutants, and VOC’s, which creates clean air by the time it comes out. That’s pretty cool! There is a good amount of restriction blowing into the Philter, so if you take a huge hit using all of the air in your lungs and try to blow it all out, it can be a little exhausting. But for average hits, it’s not bad at all.

How Long Does It Last The website says that it should last for about 150 exhales, but that depends on how big your exhales are and whether you’re using it for vapor or smoke. You’ll know when it’s time to get a new vape filter replacement when it’s hard to blow through.

Reasons To Use a Philter So why would you use something like this? Actually, I can think of quite a few reasons. The Philter is a pretty cool product. It’s small so it’s really easy to carry around and use and it absorbs all of the vapor you exhale. It’s probably not something that most people would use constantly, but on those occasions where you might need it, it’s great. This was sent to me for review from PhilterLabs.com and you can get the pocket for $15, the Phlip for $30, and a 3-pack of refills for $30. Go to their website to check them out (affiliate).