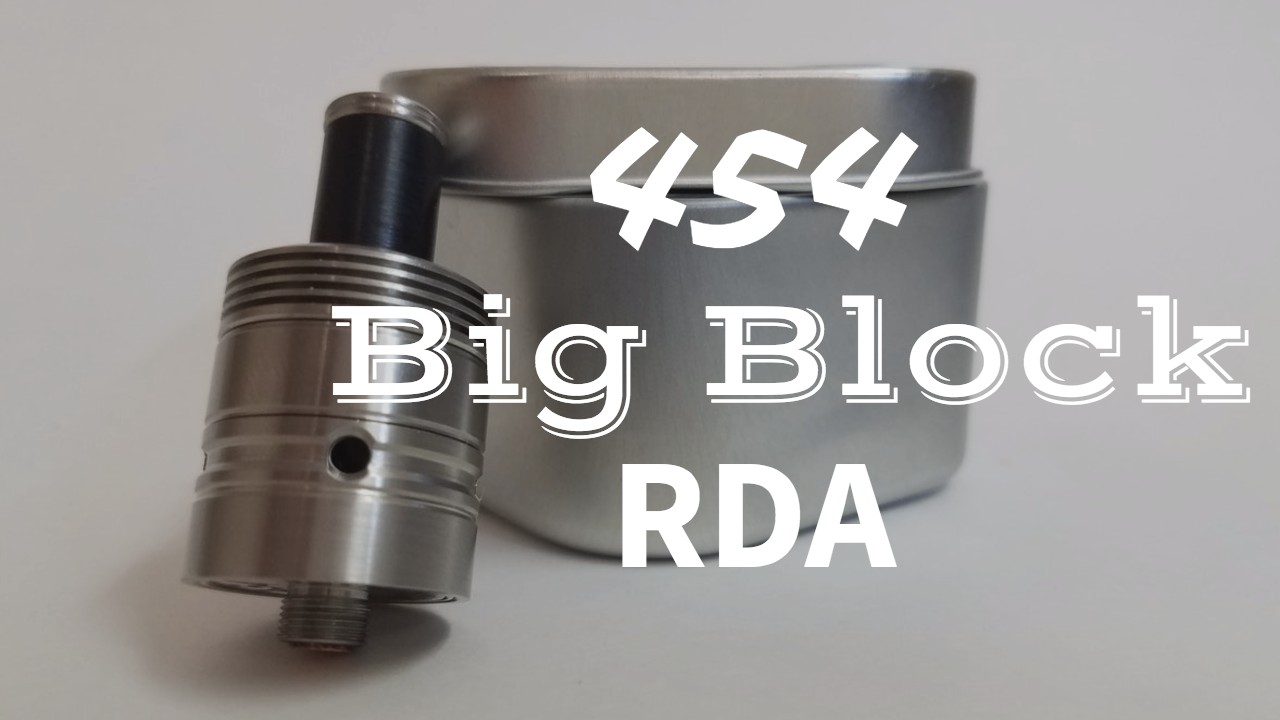 Let’s take a look at the 454 Big Block RDA made by Kryptonite Vapor, which is now known as Raven’s Moon Vapor. They are an American company that uses 100% USA sourced materials and labor, except for circuit boards.

The 454 can run single, dual, and quadruple coil builds. This was a truly innovative RDA back in the day, so let’s take a look at it and see how it stands up.

Let’s start at the top and work our way down, starting with the drip tip.

The drip tip is made with Delrin and has unique engineering. Rather than being a regular drip tip with a hole that goes straight through, it’s actually solid at the bottom and has airflow holes on the sides. This was designed to prevent spit back while vaping. It’s a cool design, but it’s still kind of a cheap drip tip and it increases airflow restriction. I don’t like that restriction, so I don’t use it, but still a cool idea.

The drip tip snaps into the top cap nice and tight. It won’t fall out. If you pull on the drip tip the top cap comes off, which make it really easy to pop off and drip on the coils. One thing you’ll notice about the top cap is that it has heatsink fins. This prevents the top from getting hot so that you don’t burn your lips. And the heatsinks work really well too. I actually vape this without a drip tip at all (“tailpiping”) because I like a lot of airflow. I haven’t had any issues with it getting hot this way. Tailpiping will get some e-juice in your mouth though, especially after just filling it up with e-juice.

The Airflow Control Is a Little Confusing At First

The juice well is decent. It’s not deep but it’s not bad. There’s a positive post right in the middle, which has four holes with one on each side. This lets you build up to four coils on here. The entire outer edge of the atomizer acts as the negative post. There are four screws.

The 454 comes with a metal ring that you can use to trap your negative coil leads, which was a really cool and innovative idea, but I’ve found that it’s easier just to trap the leads under the screws. But that’s because I use basic builds.

If you’re using large wire or a special build like Clapton’s, you might need to use that ring because the leads will be too big to fit under the screws. And if do try to use Clapton’s you’ll struggle trying to fit them into the middle positive post. They will need to be really small Clapton’s because I couldn’t fit more than one of my own into the post. I have seen some Clapton builds on the 454 on Instagram though, so it’s possible.

How to Build the 454 Big Block RDA

Building basic round-wire quad coils or putting in dual Clapton’s requires an interesting method for building. Basically, you need to build two coils on one strand of wire. The easiest way to do this is to build one coil on one side of a really long wire, put it through the positive post, tighten it down, and then build the other coil while it’s on the device. This is the only way I’ve been able to do quad coils with 26 gauge wire or getting dual Clapton’s in there. If you have this atomizer and know of other methods, please share because I’d love to learn about other options.

This is designed as a vertical coil RDA, which makes it a little more difficult to build on than typical RDAs. It makes wicking a pain too, but I found that by installing the coils at an angle, rather than straight vertical, it vapes better and is much easier to wick. The 454 has a big learning curve, especially when putting in four coils and trying to use the negative ring.

Out of the box, I had to rebuild this four times before I was happy enough to use it and it still didn’t come out all that great. It performs great though.

The 510 Pin and Insulator

And on the bottom, you see the solid copper 510 pin. This is copper designed for better conductivity. It’s non-adjustable and doesn’t stick out much, so I wouldn’t recommend it for a hybrid mech.

Once I got it built correctly, I was really surprised by the performance. So much so that I haven’t been able to put it down. Without their included drip tip, you can get a lot of airflow through here and pretty high wattages. I’ve been enjoying it at about 80 watts. The one problem that I’ve noticed is that chain vaping at 80 watts or higher can make the RDA really hot. Like really hot. It doesn’t get hot at all at the top, but instead at the bottom where it attaches to the device. It transfers a ton of heat to the device it’s sitting on. But I only get this when chain vaping. Normally it’s not bad.

The flavor is good, but not what I’d call amazing. But it’s definitely good enough to enjoy, at least for me. And it’s much better with Clapton coils installed.

What’s also interesting is that it doesn’t seem to leak through the airflow holes. There’s a little edge that protrudes above the airflow and where the top cap sits, that seems to prevent leaking when dripping onto the wicks. It’s pretty cool. If you have four coils in here, there’s enough wick to really prevent it from leaking through the airflow holes, but if you’re running dual coils and the juice well is full, it’ll pour right out when you tip it, although I think a fix for that would be to add more cotton and spread it out in the juice well.

So that’s the 454 Big Block RDA. A lot of people liked the way it looked back in the day. I don’t think it’s much of a looker today, but it’s not bad. The machine quality is outstanding and it’s really heavy duty. It was built well. Everything about this RDA still screams high-quality.

Quad coils are little hard to build, but once you get the hang of it, it’s really not too bad.

And the flavor is ok. Not great, but decent.

My biggest complaint is how much heat it transfers to the device.

But overall this is an awesome atomizer. I can see why this was so popular 3 years ago and I actually think it’s still worth buying today. I’m almost tempted to buy another one from 101vape.com just because they’re only $10 right now. So yeah, I’d say go out and get one. It’s a fun RDA that performs well and lasts the test of time.