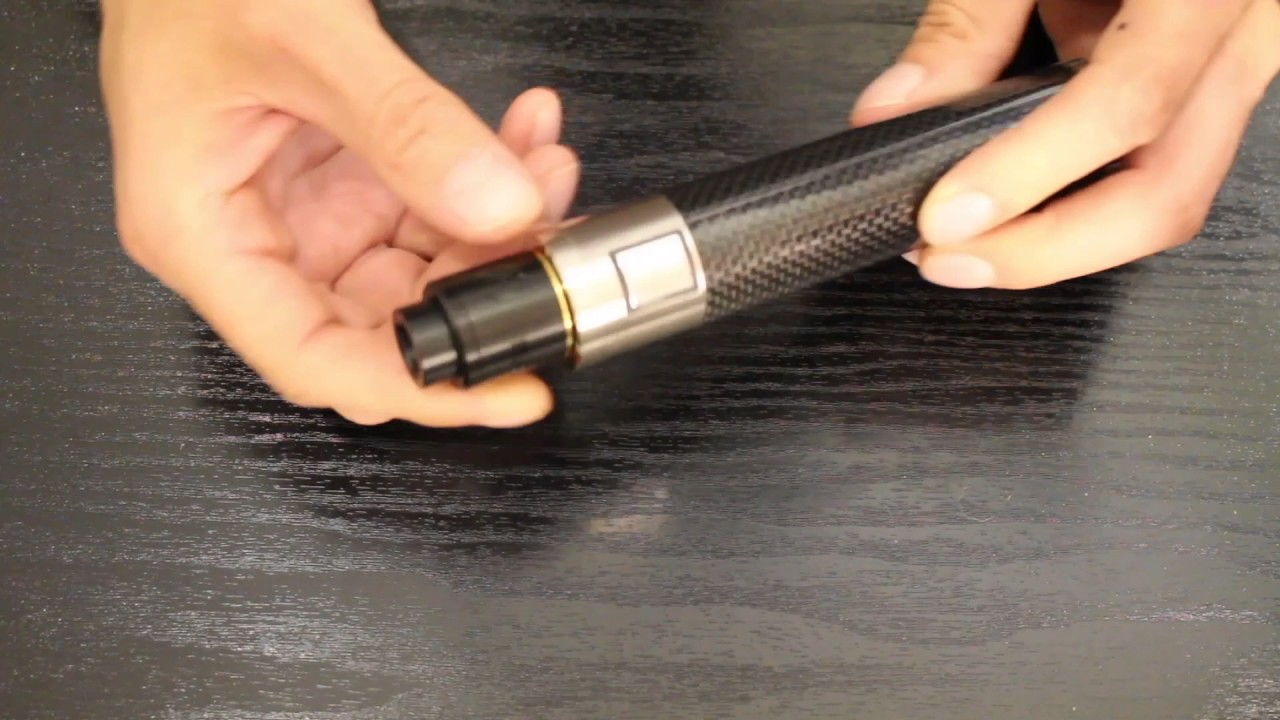 The Aspire CF Maxx is a device that came out in early 2015 that I was really excited about. I still remember posting the marketing material on my Twitter account.

But the CF Maxx was really expensive at around $75 and because vapor technology was moving so fast at that time, the CF Maxx became quickly outdated, so I never bought one.

Well, I randomly saw a deal for the CF Maxx for only $10 so I bought it.

Let’s take a look at the features

It comes in nice unique packaging, which seems like a small thing to point out, but it was the first time we saw packaging like this and I remember people being impressed with it. The little things count!

There’s nothing else in the tube, just the mod. Not even an instruction manual.

As for the size, it’s a MASSIVE device, but it’s very nice looking.

There’s a metal dial on the bottom that lets you change the wattage in 1-watt increments from 1 to 50, although the numbers printed are only in increments of five. There’s a little window on the dial to show you what wattage you’re at. The wheel moves very smoothly with no clicking.

The CF Maxx doesn’t have a screen so there’s no way of knowing what ohms you’re at or anything like that. The way these old Aspire products worked is that you’d be notified of anything happening by the different types of blinks on the light on the button. If you want to check your ohms, you’ll need an ohm checker or another device that can read ohms, which is pretty common these days.

And although there’s no screen to tell you if there’s an issue, the device does have overcharge protection, short circuit protection, safety cutoff protection, and low voltage protection. When the battery is charged beyond 4.2 volts, the microchip will automatically cut the power off so that it won’t take any more charge.

The Firing Button and Lights

Like most devices, you turn it on and off with the button – 5 clicks on and 5 clicks off.

When you turn it on the lights will flash 3 times. When it’s firing it will glow blue. And the LED lights also tells you the voltage that it’s operating in. For example, if you’re below 3.5 volts, you’ll get an orange LED.

When the device is really low on power, the LED will flash 15 times, which means it’s time to charge it. It’ll take about 3-6 hours to fully charge from there.

Now to charge this, you can’t just use a normal USB. You have to buy a special charger from Aspire that screws into the top of the CF Maxx. You’ll see the light stay on to let you know that it’s charging.

If your atomizer has a short, both the blue and orange LEDS will flash 3 times and the device will go into sleep mode so that it won’t fire anymore.

If the battery shorts while charging both the blue and orange LEDs will flash 6 times and the CF Maxx will stop charging.

If the temperature reaches above 167 Fahrenheit (75 Celsius), which is pretty hot, the LED will flash 10 times.

And if the firing button is pressed for more than 10 seconds, the LED will flash for 10 times and the device will shut off. After it has stopped flashing, you can vape again.

This is a pretty big device at 30mm, so if you want it to look good, you’ll need a big atomizer. When I put a 22 or 24mm atomizer on here, it looks kinda funny.

It would be nice to find something that fits exactly flush.

There’s not a whole lot to the CF Maxx. It fires atomizers built as low as 0.3 ohms and it fires up to 50 watts. The 3000 mah battery is decent and should last a good amount of time throughout the day, especially since the wattage doesn’t go very high.

One of the biggest drawbacks is the size. It’s huge and heavy, and probably not comfortable to carry around. It’s also a 30mm diameter device, which means you’ll need a 30mm atomizer if you want it to look nice. Something to note is that the CF Maxx launched with the Aspire Atlantis Mega tank, which is a 30mm tank, so if you pick up a CF Maxx, look for the Atlantis Mega too.

Honestly, though, I don’t think you should go out and buy this for one big reason. It has an internal battery that is about 2 years old. Lithium-ion batteries, even when not used, will only last for 2-3 years. Who knows how long the battery will last in the CF Maxx and when it dies, that’s it. You can’t replace the battery.

But for $10 and for something I really wanted a long time ago, I’m happy that I bought it.