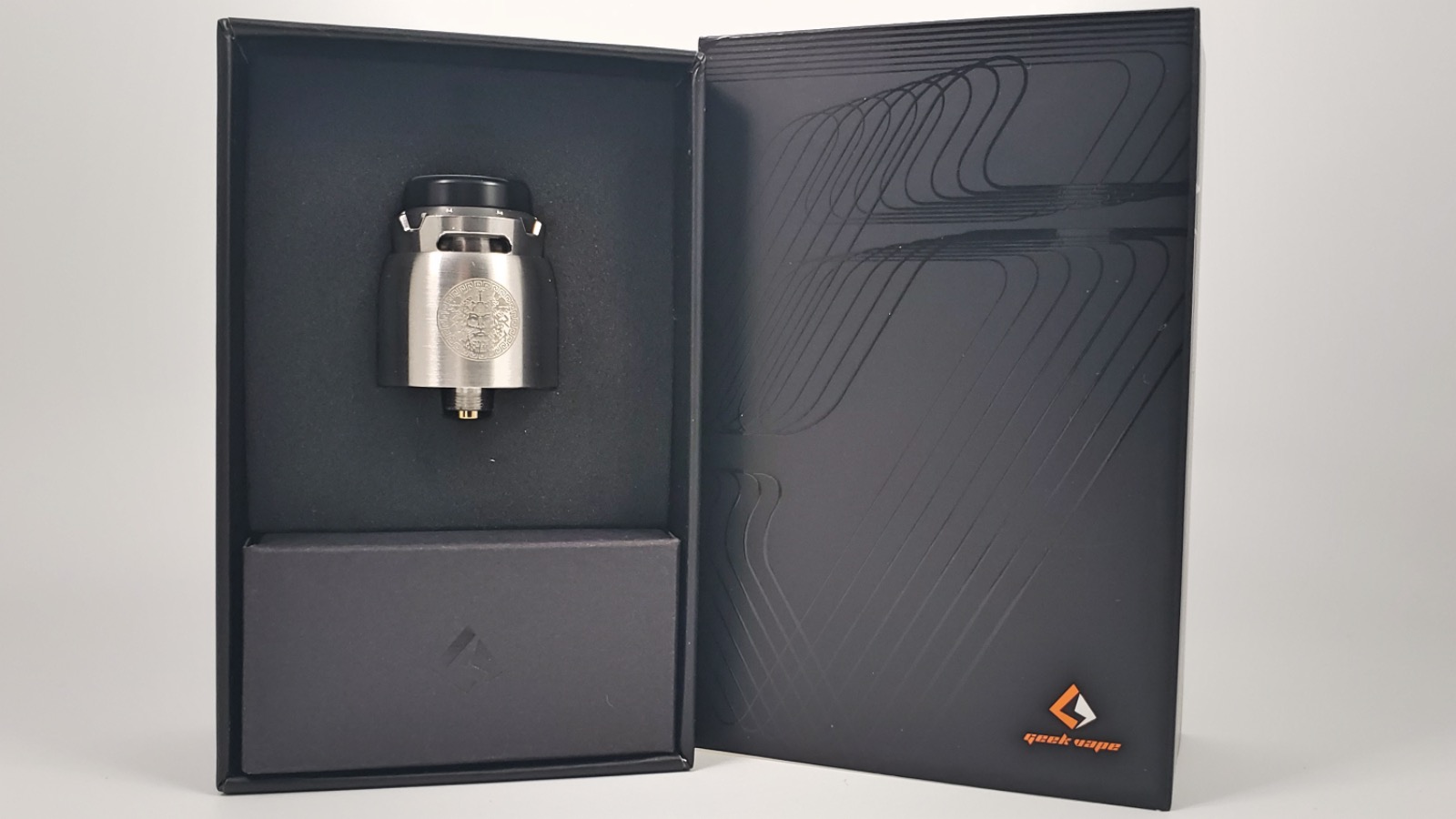 The Geekvape Zeuz RDA, also called the Z RDA, was sent to me for review from Geekvape (check it out here). This is a leakproof top-to-bottom airflow RDA designed for dual coil builds. 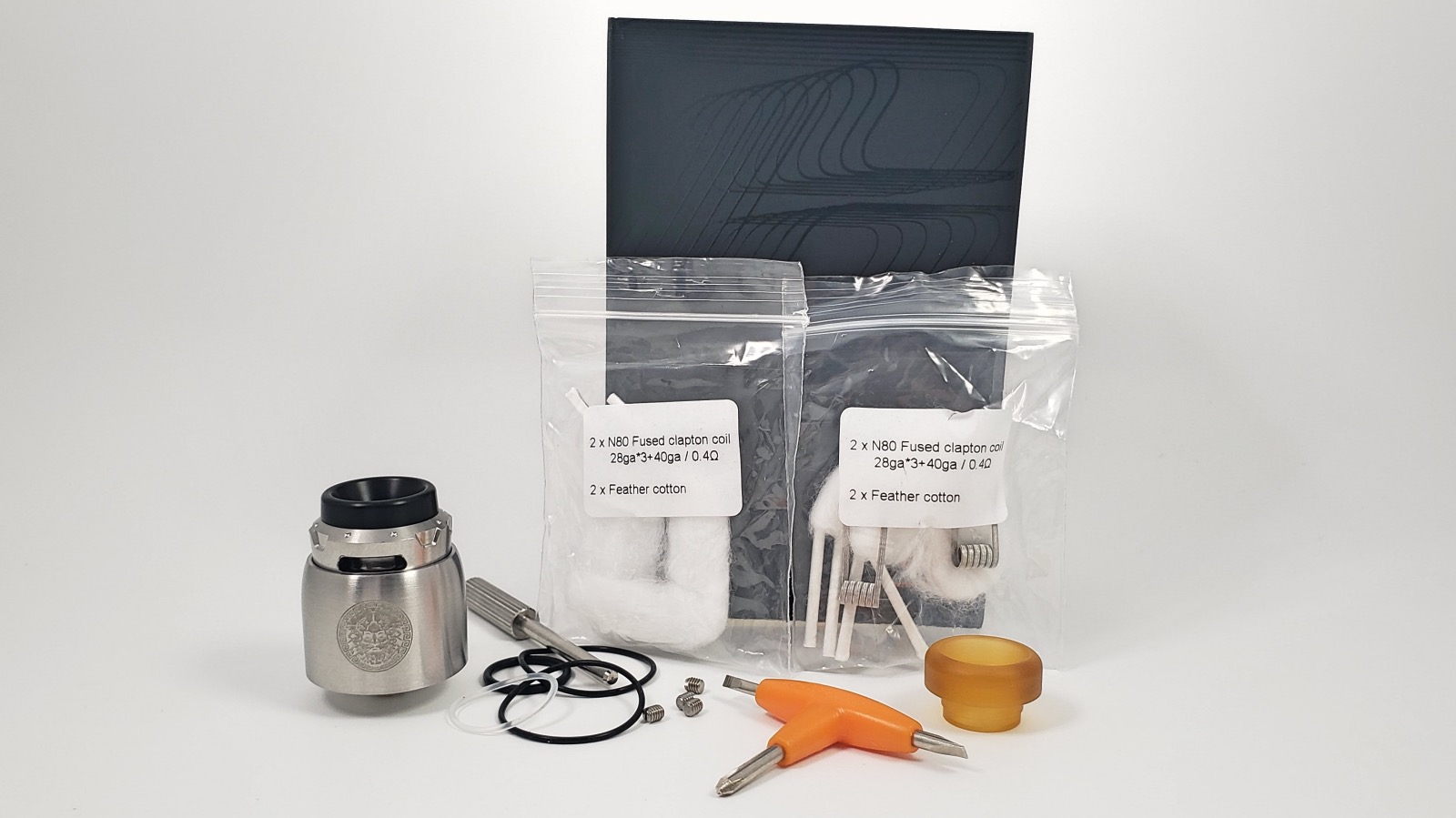 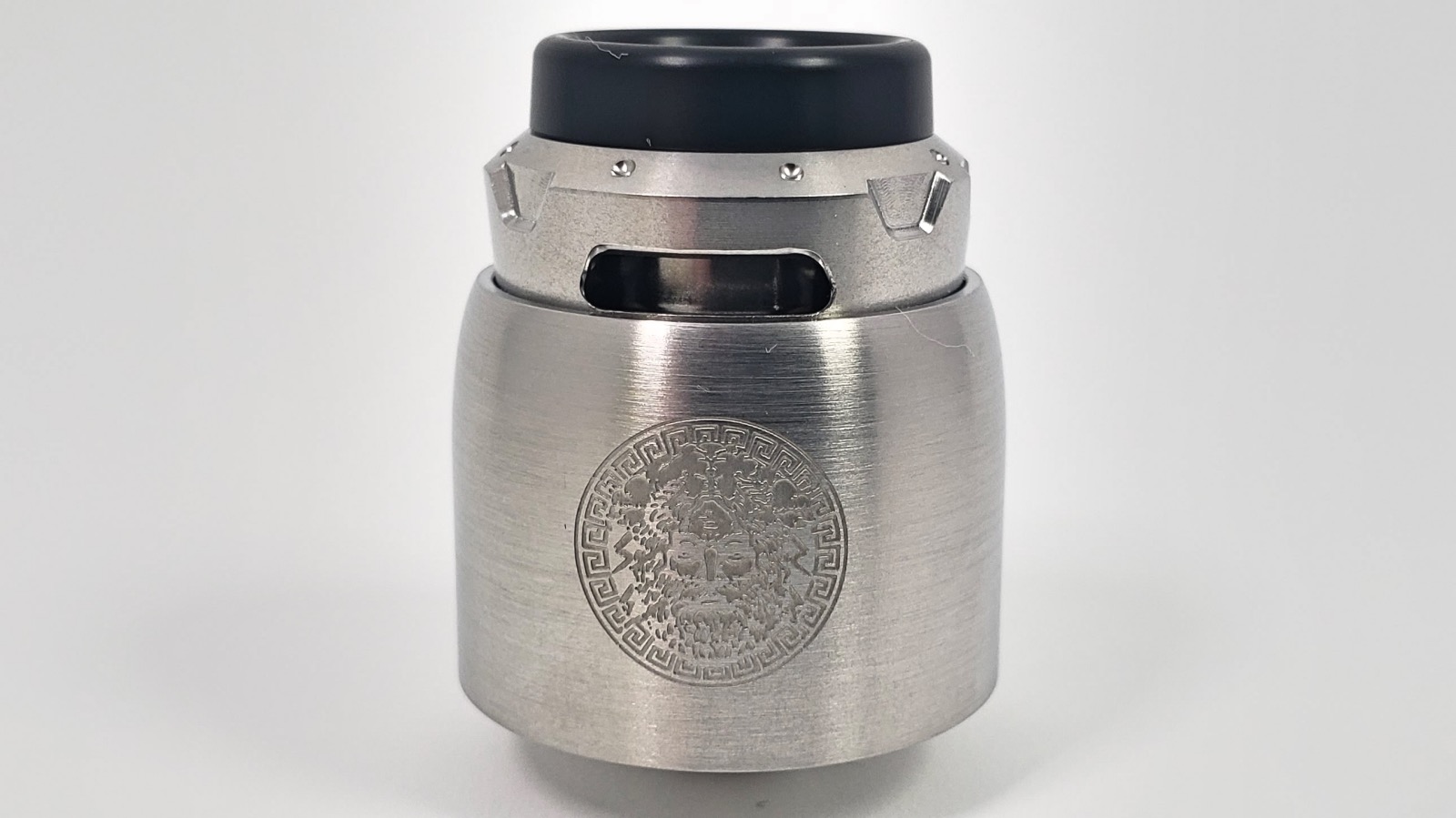 The Z RDA has a cool unique look to it. We usually see RDAs with straight barrels but this one is has a normal base that slims down at the top and then you have a really interesting design to the top cap, sort of like a kings crown. It’s a unique look. 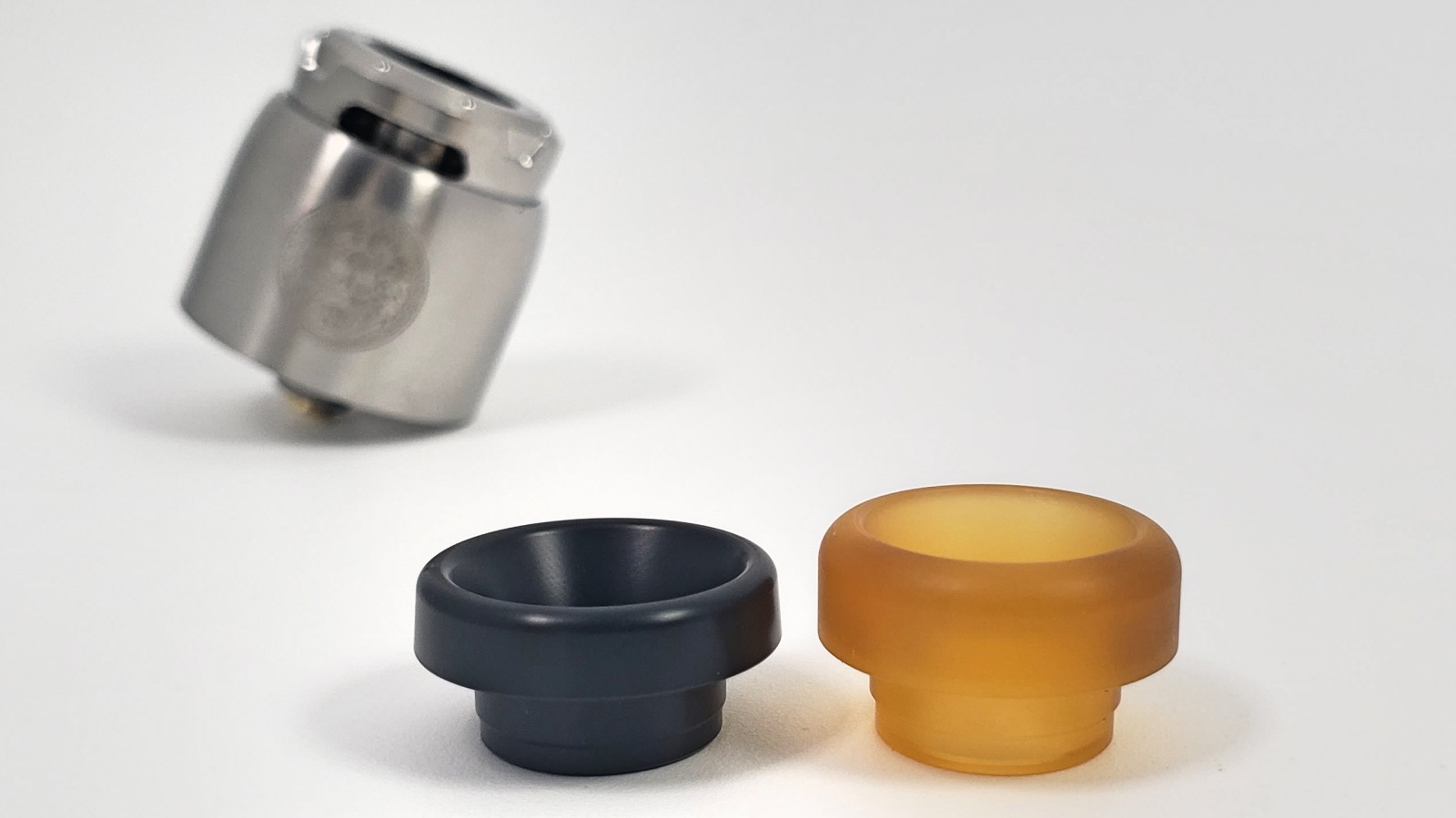 The pre-installed drip tip is a short and wide black 810 drip tip. It’s comfortable and works great on this RDA. I like the low profile of it too because it keeps the RDA has a whole nice and short. But if you want something a little bigger, they also included a yellowish Ultem drip tip, which also works nice. 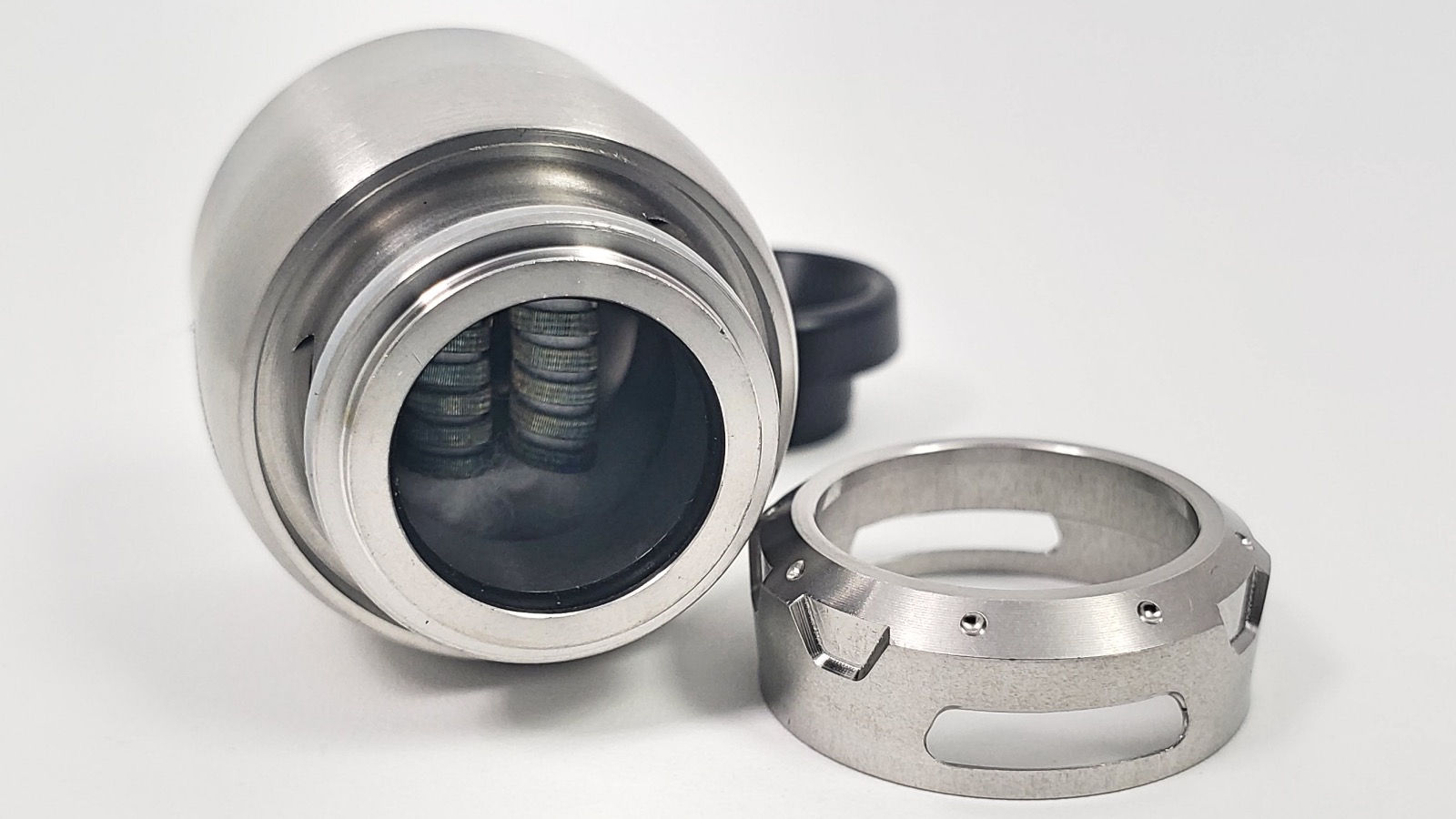 The airflow comes in from the top, travels down through the sides of the barrel and then comes back up from beneath the coil. Because of this design, the RDA is pretty much leakproof, or as long as it stays right side up. 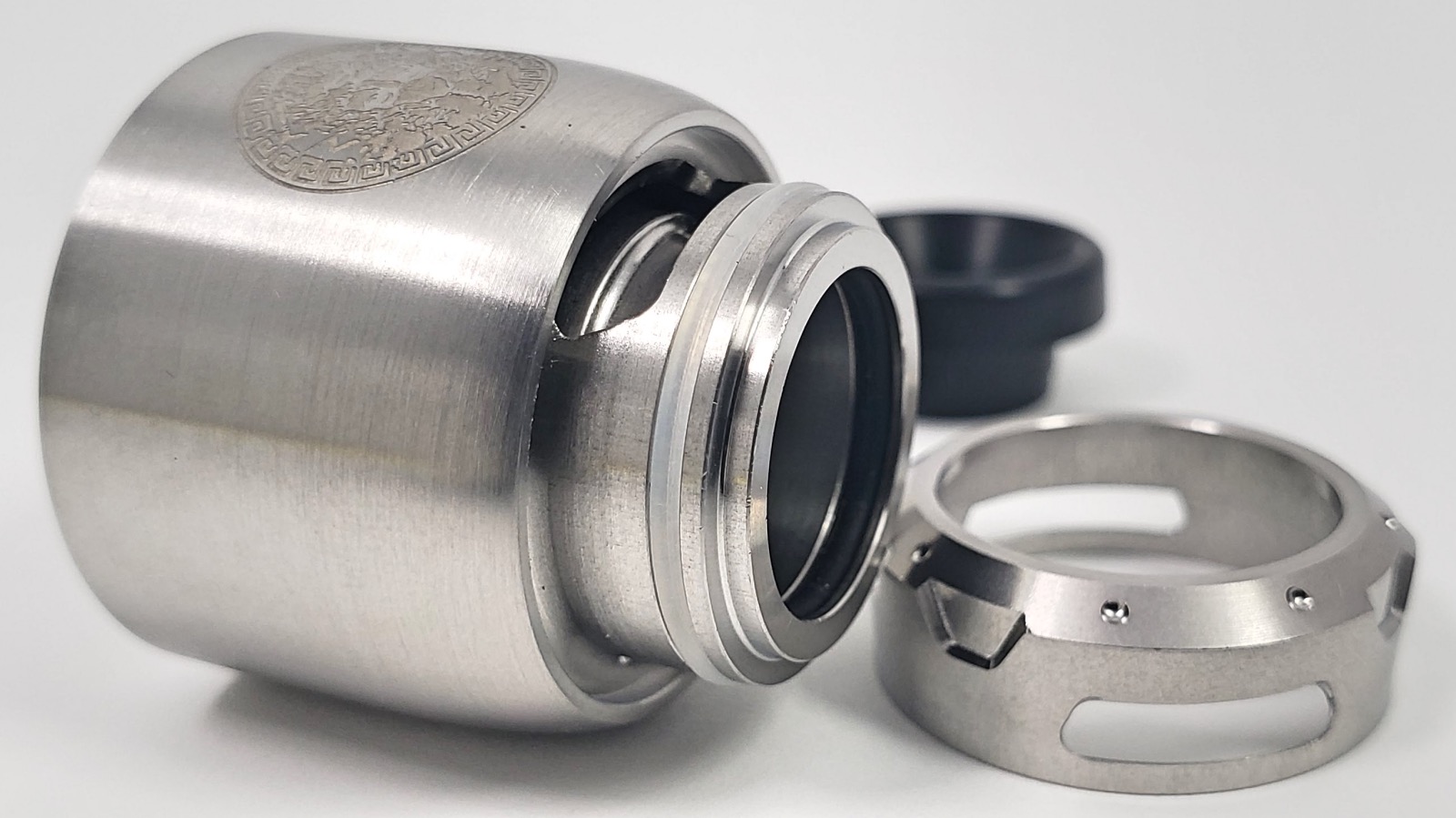 You can adjust the airflow using the airflow ring at the top. It spins completely around without stopping. You can get a lot of airflow through here for mouth-to-lung hits. You can close it down to restrict the airflow a bit but it doesn’t seem to change a whole lot to me until it’s more than halfway closed. I would have liked for the airflow to change a little more.

Geekvape also claims that the airflow on this is RDA is designed for low noise. I think it’s actually a little loud and even has a slight whistle. So that’s a bummer. 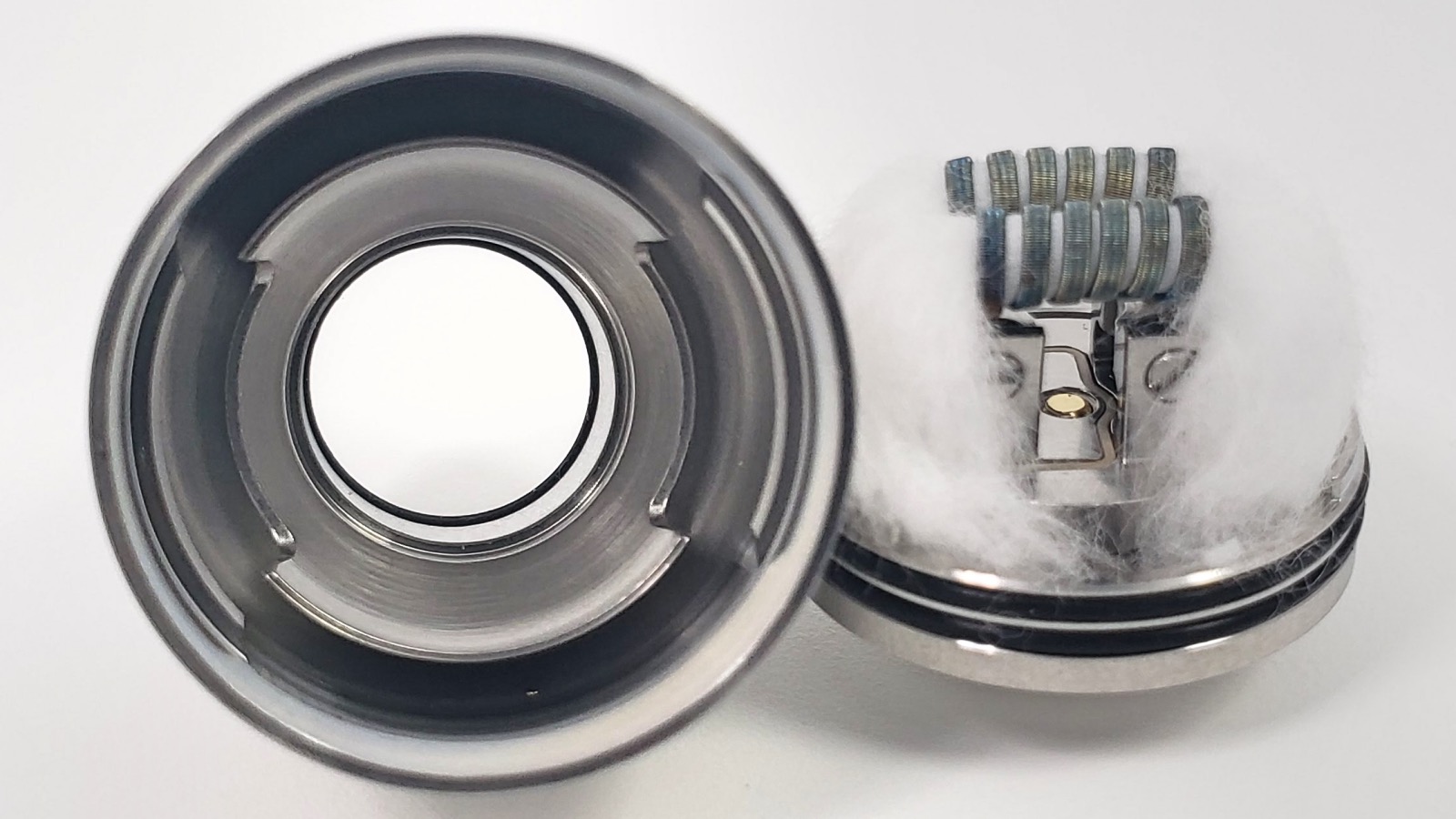 The barrel fits over the deck and has slots that force you to always position the airflow in the right place. That’s also nice because it locks onto the deck and prevents the barrel from spinning when you’re tightening it down on the device.

Up near the top of the barrel, there are also some tall ledges. This is what prevents the RDA from leaking if you tilt it. Instead of pouring out from the mouthpiece, the liquid will pool at the top of the barrel. So that’s a nice feature. Of course, it can only hold so much liquid so if you have a ton of liquid in there and leave it on its side, some of it will come out, but you’d need a lot of liquid in there for that to happen. I’d say in most cases, this is pretty leakproof.

And that’s really it for the barrel. 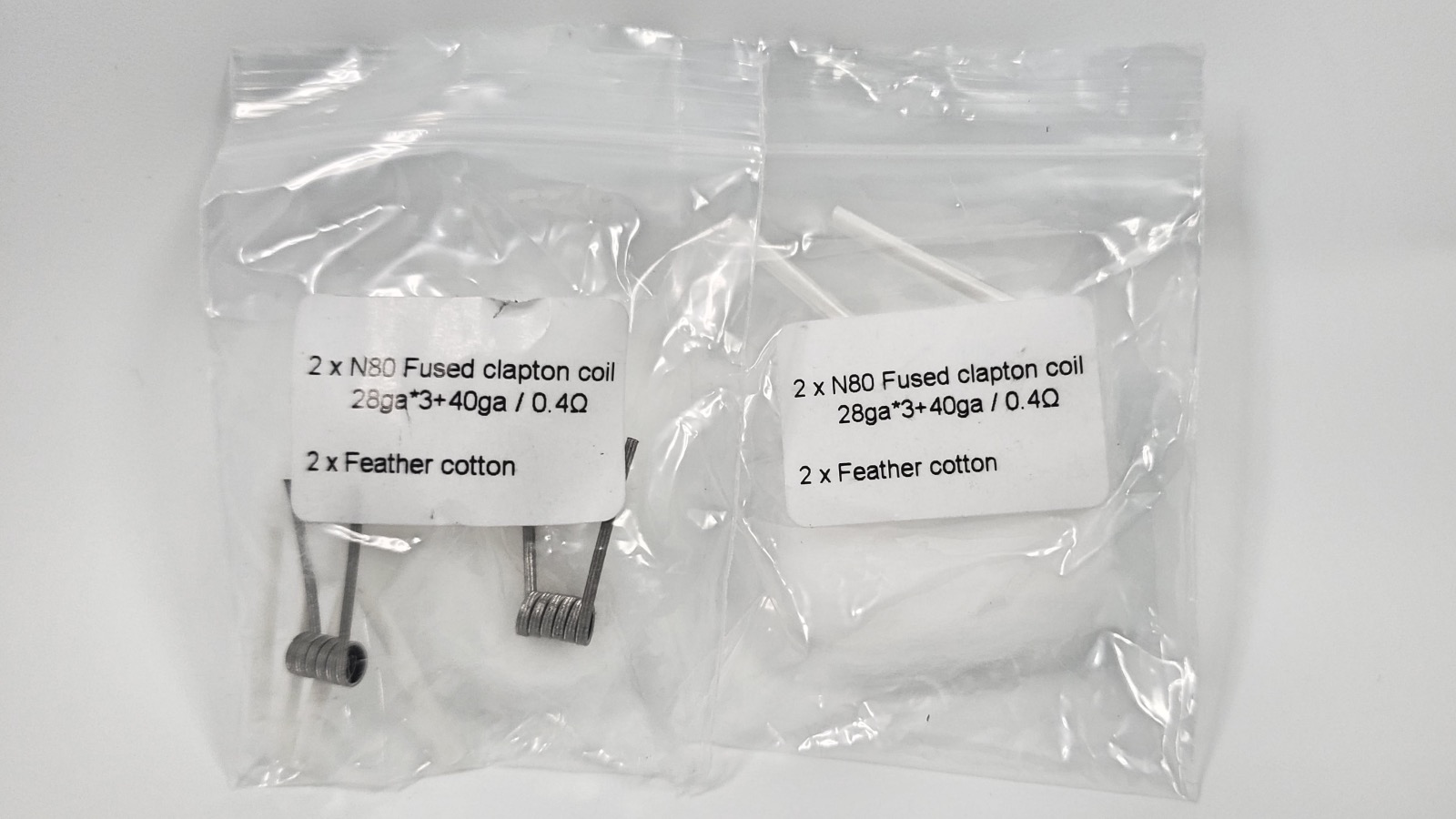 You get everything you need to build this RDA right out of the box, which is great. Geekvape gives you four fused Clapton coils and four strips of cotton that fit perfectly in the coils. 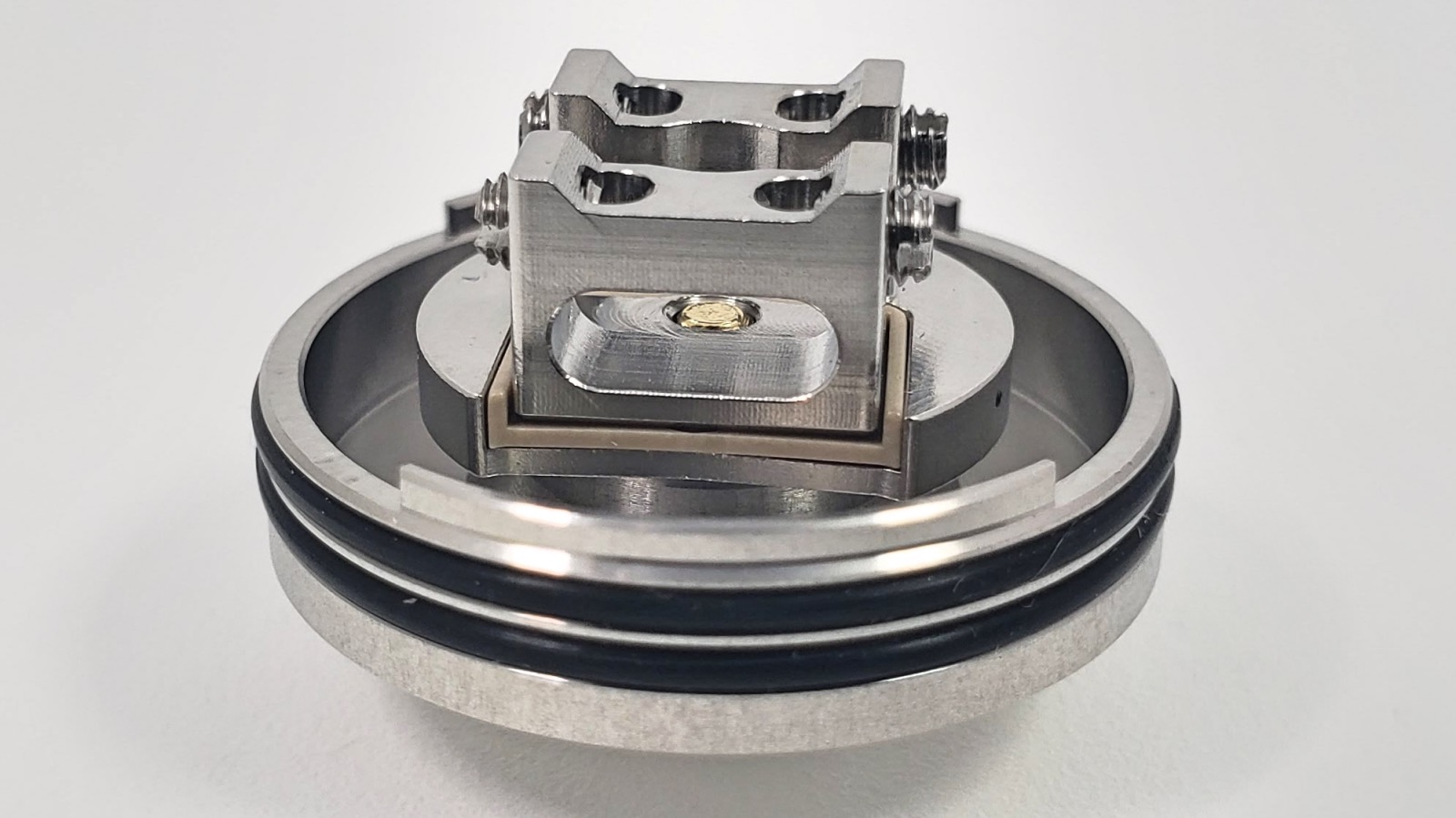 The deck has two simple blocks that give you four posts. You loosen the screws on the sides of the posts and drop the coils down into the holes and then tighten them down again. 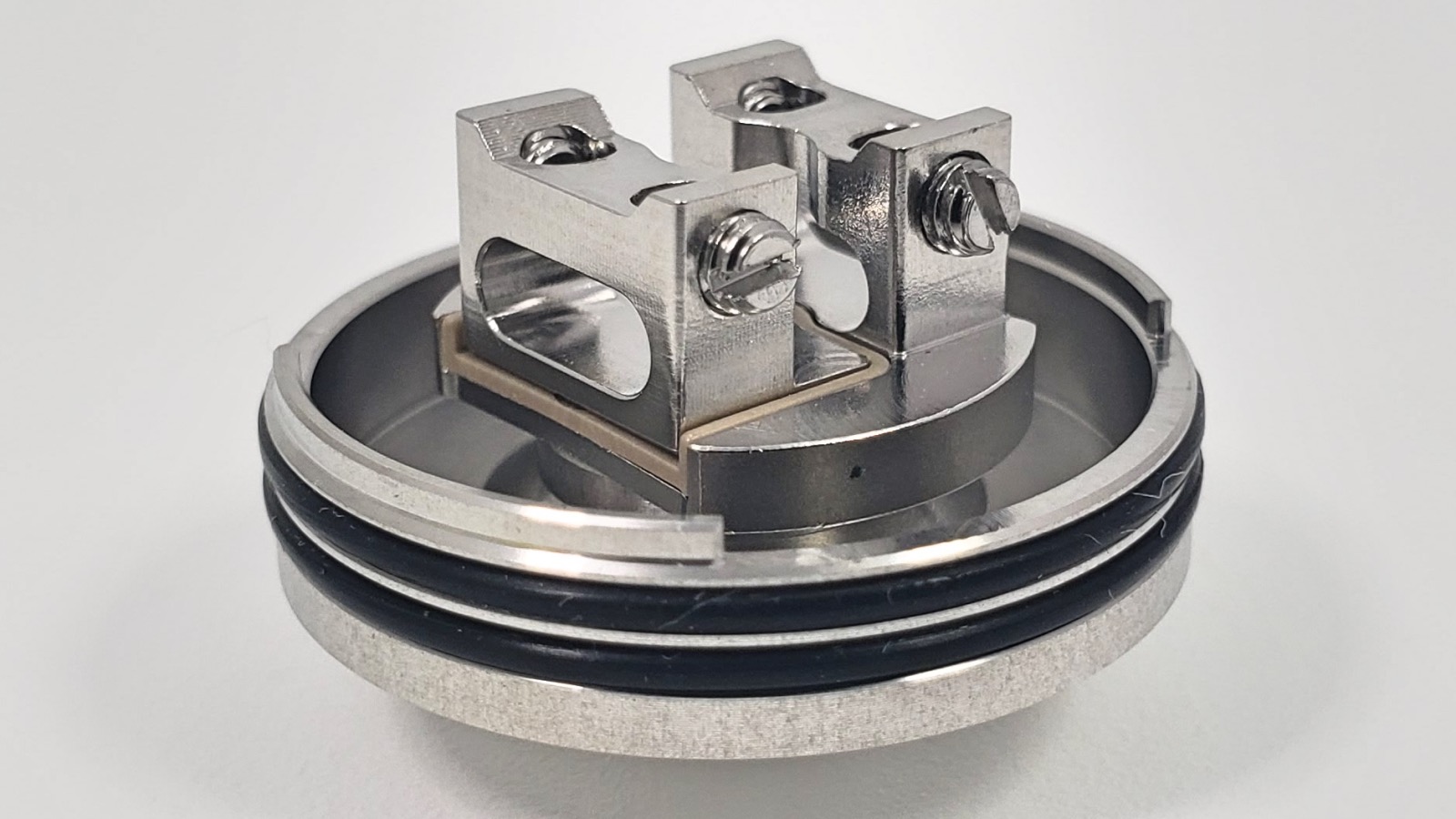 Then you clip the leads from the bottom. I think it’s easier to pre-cut the coil leads at about 4mm rather than clipping them when they’re already in the deck but either way, this is a really easy deck to build. 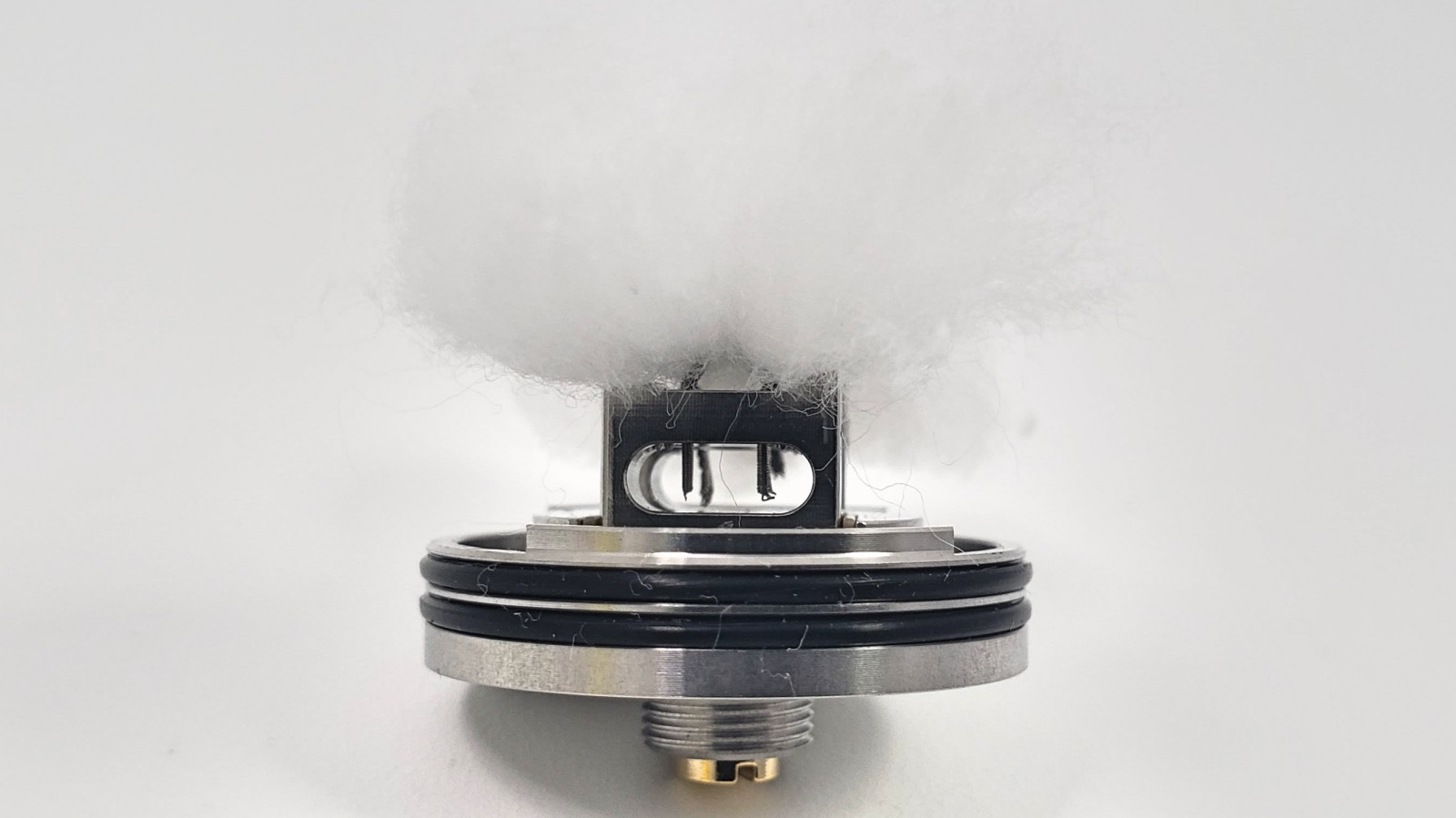 The coils sit pretty high from the bottom of the liquid well so you’ll need to leave the cotton a little long when you wick it. 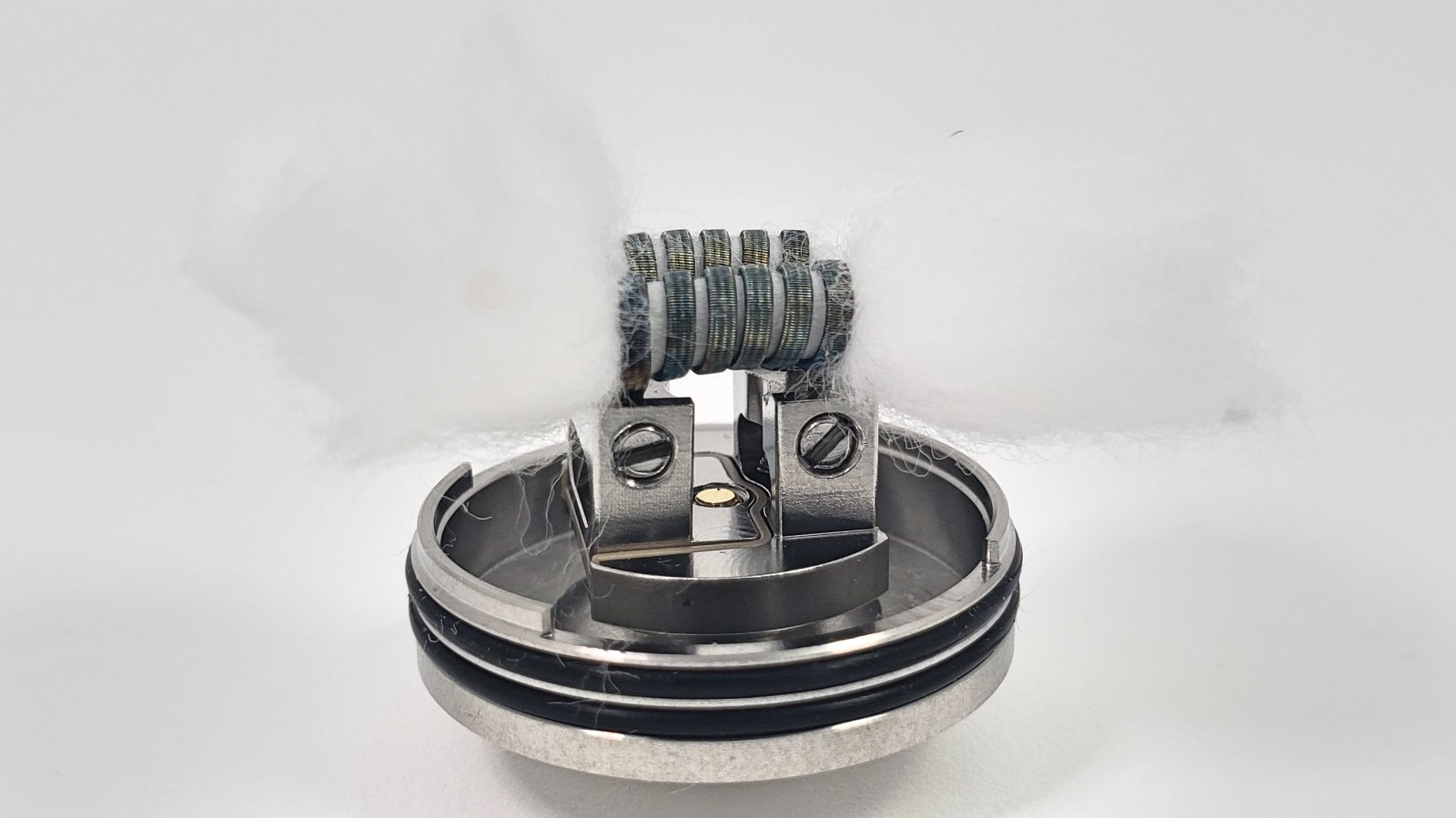 I cut mine so that the ends reach the bottom on both sides but don’t fold over. Then just spread it out and it wicks really well.

The flavor from Z RDA is good. I wouldn’t call it amazing, but it’s nice. The overall performance is satisfying too. It’s comfortable to hit and the vape is thick. I also like the way it looks and how small it is. And it’s easy to build. So lots of good thing going on here. I would have liked for the airflow ring to attach more tightly and I would have liked for the airflow to be quieter, but that’s about it for complaints.

Oh and one notable piece missing from the box is the bottom feed pin. I don’t really use squonking devices much so it’s not a problem for me but I’m sure that’ll be a con for some people. You can buy the pin separately though, so at least you have that option if you want it.

But other than that, it’s a nice little RDA.

This was sent to me for review from Geekvape and you can pick it up from them for about $26.00.