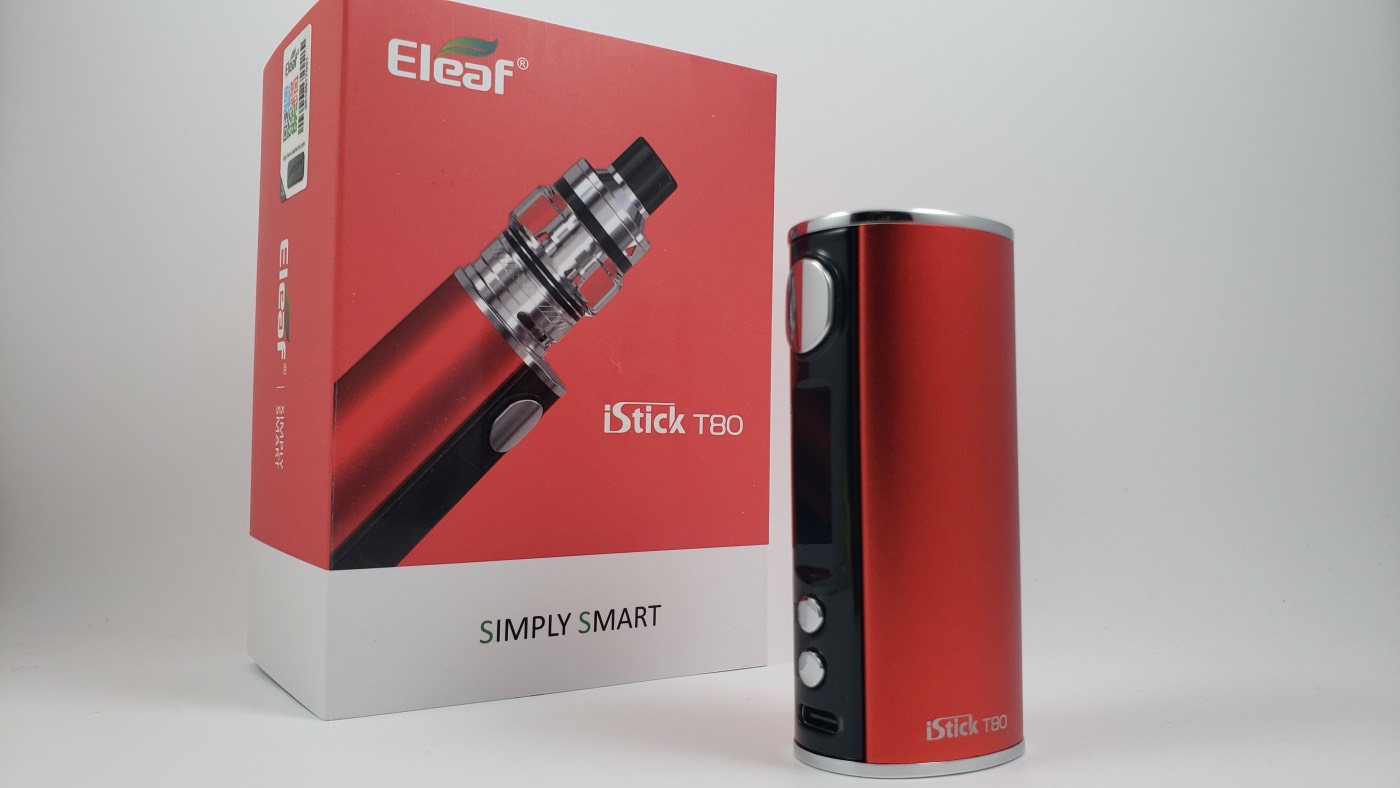 I’ve always been a big fan of the iStick series, partly because the iStick 20 watt was my first real vape device, but also because that device performed amazingly. After that, I bought the iStick 50-watt device and then later the iStick 100w and I loved those too. So I clearly have a bias towards the iStick, but that also means I have high expectations of it too. Eleaf always has great design and packaging. I’ve always thought of their design style as the Apple of the vape industry. The design of the iStick T80 is sleek and modern. The finish is a smooth metallic color, the front of the device is nearly entirely black, and the accents are silver. It really looks great in my opinion.

To turn the device off and on, click the firing button five times fast. That firing button is big and comfortable to use, and it also has a nice click to it.

The screen shows the battery life, the resistance of the atomizer, wattage or temperature, voltage, and amps. While the device is on, click the firing button three times fast to access the modes. You have a few modes to pick from; wattage, bypass, and a few preset temp control modes.

Memory – You have three memory spots so that you can save your favorite settings if you’d like.

Variable Wattage (VW) – This is your standard wattage mode, which goes from 5 watts to 80 watts.

Bypass Mode (BP) – This runs the device sort of like a mech mod and gives you power based on the charge of the battery and resistance of the atomizer.

You also have two shortcuts on the device

Lock the device – press and hold the up and down button.

Settings Menu – press and hold the firing button and the up button to get into some extra settings. From here you have turn on Stealth Mode, see version history, and get battery details. The iStick T80 has an internal 3,000mAh battery, which is a lot of battery life for a device of this size. Of course if you’re vaping at the max of 80 watts all the time, the battery will die faster but 3,000mAh should be enough to get you through the day without needing to charge it, even if you vape a lot.

The T80 charges using a USB Type C charger, which is awesome. It’s great to see more companies doing this and I think it’s going to become mandatory pretty soon. But since this uses a USB-C cable, it also supports fast charging. So you can charge the T80 fairly quickly. The specs say you can fully charge a dead T80 in only an hour and 30 minutes. The Eleaf Pesso tank is mostly like any average sub-ohm tank, but there are some neat features to it.

But before we get into the features, I want to point out that I had a hell of a time getting this tank apart for the first time. I was cranking on this thing for about 30 minutes and it just wouldn’t budge. And eventually, the glass cracked. I was mad. So I took it into the garage and took a hammer to it. I was on the verge of smashing this into pieces, and I would have if there wasn’t a spare glass in the box, but since there was decided to give it another chance. And honestly, I’m glad I did. There are some things to like about this tank. I’m hoping that my experience was a random isolated incidence. It happens.

Starting at the top is a huge 510 drip tip, which is a unique choice for the design here because it’s big like an 810 tip, but the inner diameter is like a 510, so it has some restriction. My guess is that they wanted it to look like a typical high wattage tank since that style is popular right now, but they wanted it to perform well for the way it was designed – lower wattage and tighter draw. I don’t see anything wrong with it, I just found it interesting.

One potential con here is that the top cap protrudes, so if you want to use your own tips on here, not all of them will always look great. They’ll work fine though. The Pesso uses a sliding top cap to access the liquid fill port. You’ll see on the top cap that there’s an arrow indicating where you need to push to slide the cap. It slides open easily and seals well too.

One of the common complaints with sliding top caps like this is that they tend to open easily or leak. I haven’t had any problems with the Pesso in my experience. so no complaints from me.

The liquid fill port is big and easy to use too. There are two types of coil heads that come with the Pesso tank. These coil heads are press-fit into the bottom of the tank, so they’re really easy to change. All you do is unscrew the base and push the coil into the chimney section of the tank. This is a vertical coil rated for between 50-60 watts. This is a mesh coil rated for up to 35 watts.

Both coils work great. The flavor is pretty good, they perform well at their max wattages, and the coils have lasted me quite a while (at least the same as any average coil head).

When you take the base off you’ll also notice that because the coil is press-fit into the chimney, rather than screwing into the base, no liquid reaches the base. That makes it so that this tank is very resistant to leaking. And that’s awesome because bottom airflow tanks tend to leak a lot, but that just doesn’t seem possible here. I really like this. This is a bottom airflow tank so it’s designed for better flavor.

With the airflow wide open, you can get quite a bit of airflow, but you’ll also notice that the airflow control is designed with a wide-open slot and also two smaller diameter holes. So it’s clear that Eleaf intended for this tank to work well with tighter draws. and it does. The airflow works great for both a big open draw or a tight restricted draw. I’m not gonna sugar-coat my frustrations with the tank. I was super-pissed with my experience in getting the tank apart and having the glass break. But I took a couple of days away from the tank to calm down and then I installed the spare tank. And after changing the glass, I haven’t had any problems with it. My hope is that this was just an isolated issue for me. But the tank performs very well – the airflow settings work well, filling the tank and changing the coils is easy, there aren’t any issues with leaking, and I get good flavor.

The T80 has been great all around. No problems at all. It’s comfortable to hold, it looks great, it’s not overly-complicated, it has temp-control, and it charges with USB-C. I really like it.

The iStick T80 was sent to me for review from VapeSourcing.com and you can get it from them for $32.99 using the coupon code: T80KIT. Thanks for checking out this review and I’ll catch you on the next one!