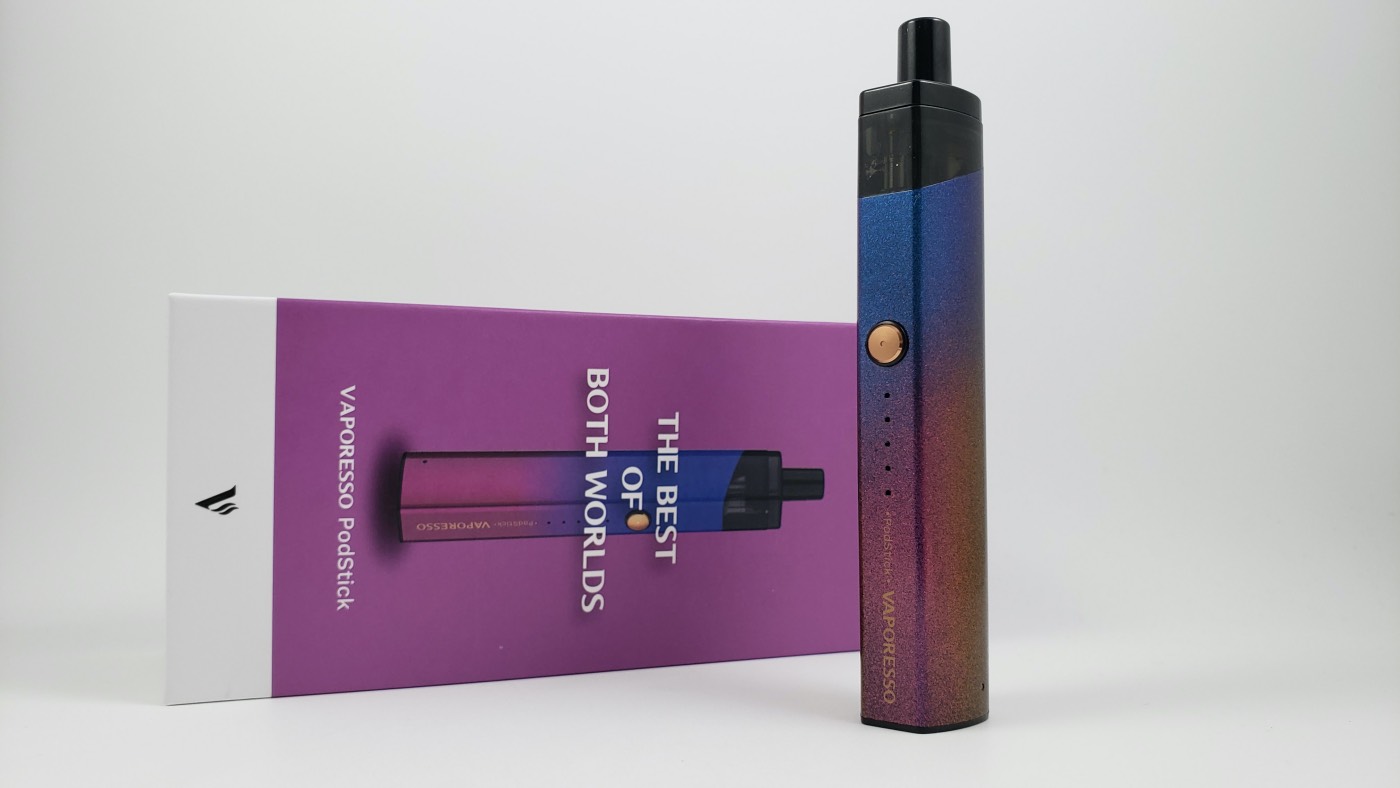 The Vaporesso Podstick was sent to me for review from Vaporesso.com. Vaporesso is calling this the best of both worlds between pen-style and pod-style devices. They say that the Podstick can do both sub-ohm and MTL well. So let’s take a look and see!

The design doesn’t seem like much is going on here, but the idea behind the style is pretty unique. It’s just like Vaporesso describes it – a pen-style device, slightly boxy, and with a pod. Nothing amazing really, but it’s a little different.

On the front of the device is a single firing button and five little LEDs to tell you how much battery life is left in the device.

And the Podstick comes in six different colors; silver, black, blue, gold, rainbow, and a black model with green splatters. All of these have gold lettering and a gold fire button. Five clicks turn it on and off.

There are three power levels to pick from on the Podstick. To cycle through those, click the firing button three times fast. The red light is low, the blue light is medium, and the green light is high.

And to fire the device, you press the firing button. So no auto-draw here. The mouthpiece is built into the pod. It’s a slim tip that’s comfortable to use. On Vaporesso’s site, they keep using the acronym, PTF. They say there is a PTF on top or PTF on the slide. I know they’re referring to the pod or mouthpiece in some way, but I have no idea what a PTF is. Maybe Pod Top Fill?

To fill the pod you slide the top open. This makes it nice and easy to fill since you don’t have to pop open any seals or take the pod off. And each pod holds 2ml of e-liquid, so it’s a nice capacity.

These pods use the valve style system made popular by the Vaporesso Zero. So to fill this type of valve setup, you push down on the value with the tip of a bottle and then push e-liquid into the hold. It works well and makes the pod pretty much leak proof. In the box, you’ll also get a small liquid bottle with a fine tip, which is a nice touch. Most plastic bottles have small enough tips that will work for the valve, but if you have an e-juice bottle that has a glass dropper, that’s where you’ll need this bottle because a glass dropper won’t work here. The pods click into the device and sit real snug.

The coils are built into the pods, so when the coil burns out or when the flavor becomes muted, you’ll need to replace the entire thing. That’s a drawback for sure, but on the plus side, the pods aren’t all that expensive. You can get a 2-pack for about $10.

The CCELL pod is built at 1.3 ohms and is designed to run between 9-12.5 watts. This is the pod you would use for more restriction or if you’re vaping high-nicotine e-liquid. The draw works really well for a mouth-to-lung draw. It’s not super restricted, but it’s not too loose either.

The Mesh pods are built at 0.6 ohms and are rated for 17-22 watts. This is the pod you would use for a loose draw, lower nicotine levels, and higher temperatures. The draw works really well for bigger hits.

The flavor in both pods is very good. The mesh pods have slightly better flavor, but CCELL coils from Vaporesso are still really good too.

Coils from Vaporesso have always had a really good life. Vaporesso says the pods will last for about 5 refills. That’s probably pretty accurate, but you should be able to get more life than that if you don’t mind a drop in flavor. The five LEDs on the front of the device indicate how much battery life is left in the Podstick.

The USB charge port is on the bottom of the Podstick, so you won’t be able to stand it up while charging, but since the pods don’t leak and because the device is long, I don’t think you’d want to stand it up to charge anyway. I don’t know, maybe you do, but I think the location of the charging port matters much here.

This does have a passthrough functionality also, so you can vape it while it’s charging.

I really like the Podstick. The size and feel in the hand is nice. The coils work well, have a longer-than-average life, and have very good flavor. And there are several power levels to choose from, so the whole thing is very easy to use.

One feature that you might consider a pro or a con is the valve-style fill system. It’s a great feature for preventing leaks, but it also means that once a pod is filled, you have to vape it empty before putting a new flavor in. That’s might not be an issue for some people, but for people like me, who like to change flavors constantly, it’s a drawback.

One other con for me is that the entire pod has to be replaced. I would have liked for the pod to be reusable with an interchangeable coil to keep the costs down.

But the kit overall is great.